Have a Bowl of Nostalgia at Goldleaf Restaurant. 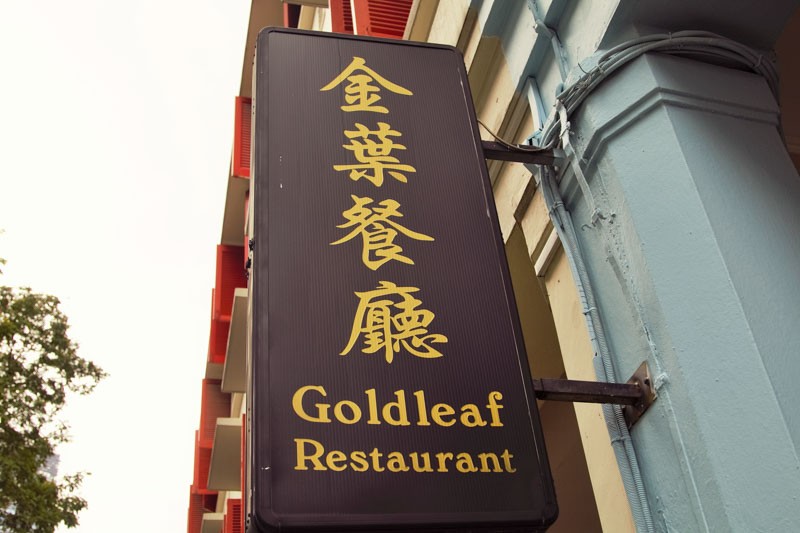 Way back in the 70s, a restaurant saw the beauty in plain ol’ porridge and breathed life into it, thus birthing the Taiwanese tze-char porridge craze in Singapore. This long-established restaurant is none other than Goldleaf restaurant.

Goldealf’s tze char porridge concept gained popularity among locals when it settled down along Orchard Road and has warmed the hearts of many with their steamy bowls of congee.

With rapid constructional changes on our island, however, Goldleaf, which was once recognized by devoted patrons as the porridge shop along Orchard road, had to continually scout for new settlement areas.

For the loyal few, you’ll be pleased to know that this beloved Taiwanese porridge restaurant has taken relocated to Amoy Street and will be celebrating its 45th anniversary this March with wonderful deals. 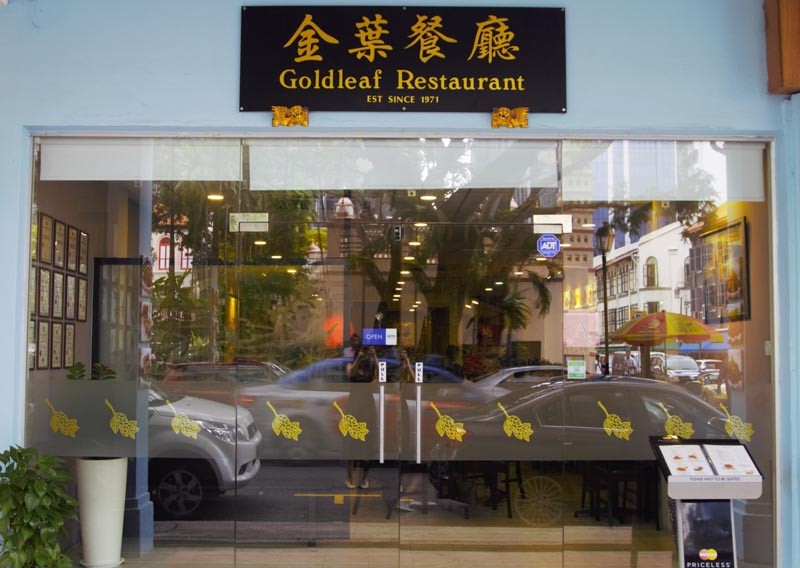 Situated near the hubbub of Chinatown, Goldleaf’s new location along Amoy street seems very fitting for it now sits near a culturally-rich appropriate place. Goldleaf restaurant is easily recognizable from the outside with its bold restaurant sign embossed in golden writings.

A simple yet elegant row of golden leaves has been plastered onto the restaurant’s glass doors, making it not only all the more recognizable but it also captures the almost oriental essence of Goldleaf. 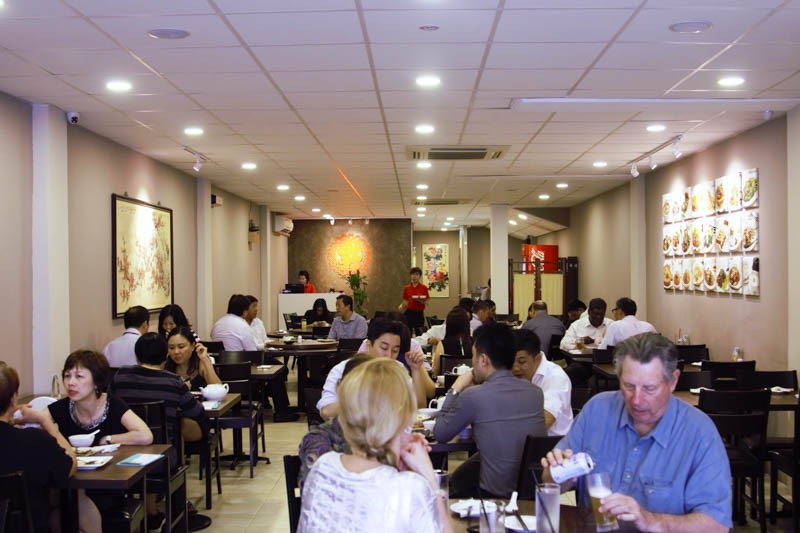 When we entered the place, we found that in spite of the numerous shifts in location, the Goldleaf restaurant’s legacy has truly traveled far and wide. The restaurant was very simply furnished with hard wooden tables and chairs, and the walls were adorned with several pictures and paintings that helped to add to the traditional Chinese restaurant vibe. 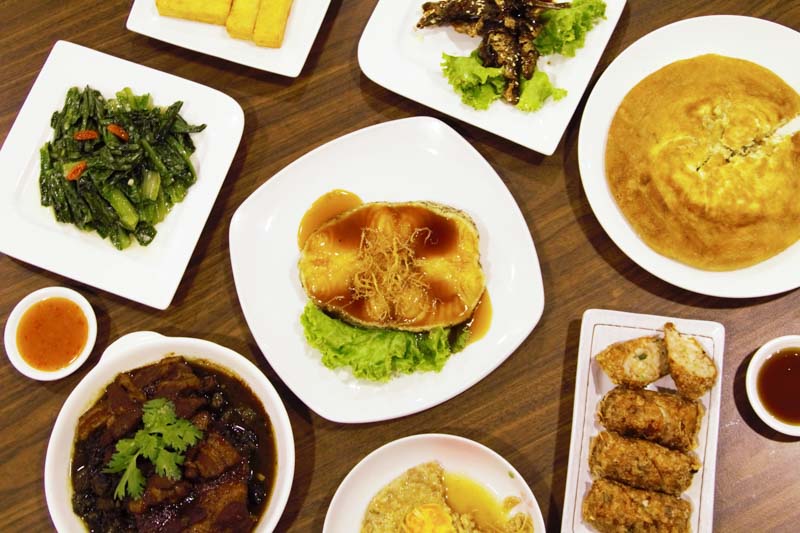 While the interior decor of the place is not the most extravagant, Goldleaf definitely makes up for it by keeping true to the Taiwanese concept and ensuring the crowds that flow in and out of the restaurant get a good helping of authentic flavours and tastes. 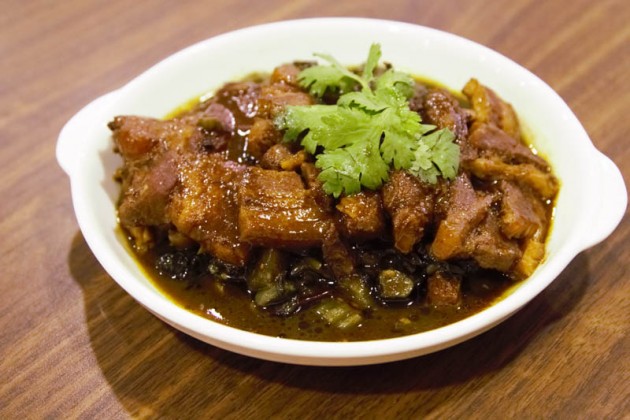 The first dish we tried was the Braised Pork with Preserved Vegetables ($16). This dish was incredibly tasty what with the braised pork sitting a top a generous serving of herbal sauce. The pieces of pork were tender, very juicy and definitely added a powerful punch of flavour to my porridge.

We were told that this Braised Pork dish is one of the restaurant’s most cherished dishes as the dish’s history is steeped in tradition, having been cooked and served since 1971. 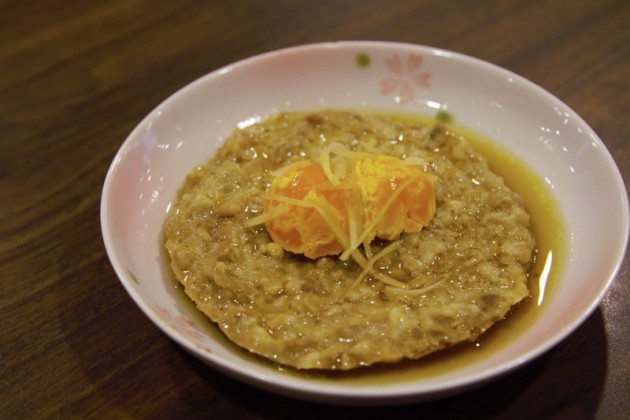 Another pork dish we tried was the Steamed Pork Patty with Salted Egg Yolk ($10). While at first sight I was a little put off as the meat patty was dubious looking, my impression of the dish really took a turn for the better when I actually dug into the dish.

This dish essentially tasted like the beautiful insides of a minced pork dumpling. The pork patty was robust with flavour and was soft but did not have a mushy texture. This next dish which is known as the Goldleaf Prawn Rolls (4 pieces- $8, 6 pieces-$12) was one of my favourites and I found it highly fascinating how the recipe for this dish has been around for over 70 years.

There were subtle bits of water chestnut mixed into the prawn rolls which I thought helped make the ngo hiang filling taste far from dry. There was a delicious balance of textures with the nice crispy outer skin and the beautiful soft insides. 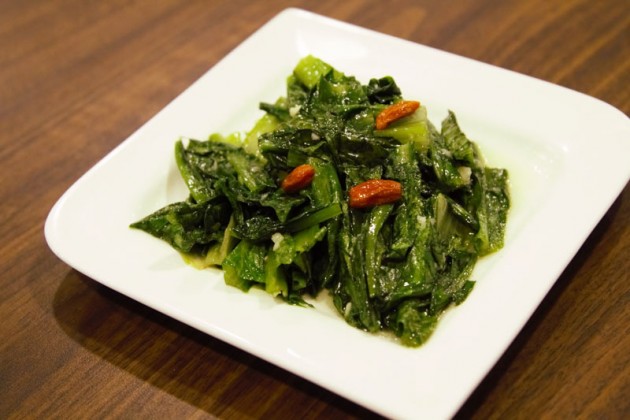 I will definitely not go out of my way to urge people to eat vegetables, something rather unfavourable I’m aware, but this Er Cai (Taiwanese lettuce) ($10) dish was actually rather magnificent. I don’t mean to exaggerate things but I really loved how it was surprisingly tasty.

The vegetables were salty but not unbearably so and they had a lovely crunchy texture which was nicely balanced out with the occasional soft parts. If you need a tasty vegetable dish to balance out the meats, this should definitely be your pick. As with most tze-char meals, an egg dish is almost always mandatory. We had our portion of eggs with this glorious, golden pancake-looking Chye-Por Omelette ($10). The omelette was thick with chye-por filling and it had a nice crisp outer layer that complimented the creamy insides beautifully. Pair this with your watery rice and come to know what happiness feels like. 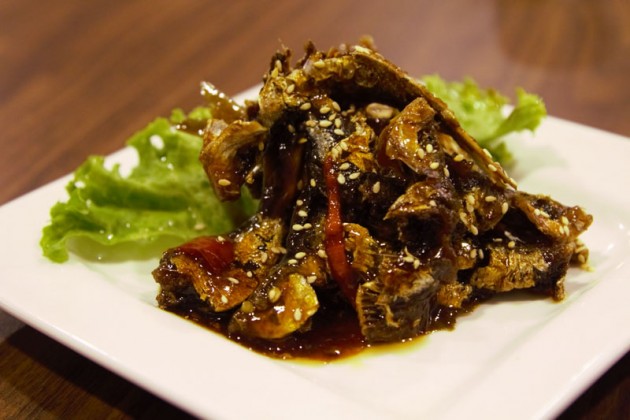 This slightly gruesome-looking dish is made up of well-sauced up Deep-fried Tamban Fish ($10), which is nice and crispy when hot and goes very well with porridge and beer. This was the one of the only few dishes we tried that achieved a good balance of sweet and savoury. I also appreciated how the sauce helped to mellow out the distinct seafood taste of the Tamban fish. This next dish was rather interesting. It is called Seafood Beancurd Bars ($8) and it essentially tastes like fish fingers with a touch of toufu. The filling of these crisp, golden bars were rather mushy and had a nice sweet taste to it. The side of spicy chili sauce helped to add a little zest to this dish too. 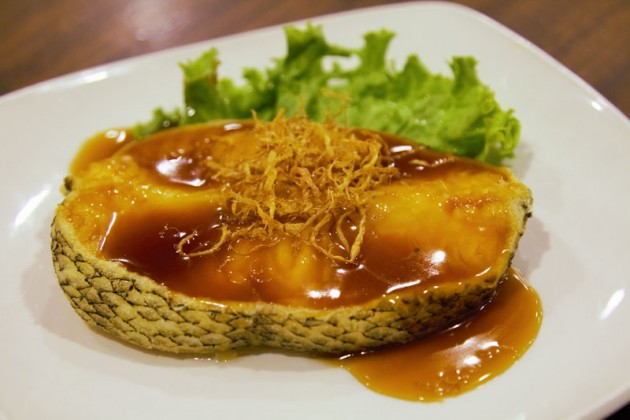 While on the seafood side of things, we also got to try Goldleaf’s Signature Cod with Specialty Sauce ($12, 100g). It came with a dark, slightly sweetened dollop of sauce which went very beautifully with the cod fish.

The fish was topped with a helping of shredded ginger which really helped to balance out the hearty flavours of the soft and savoury cod fish. There is definitely a reason it is one of Goldleaf’s signature dish. 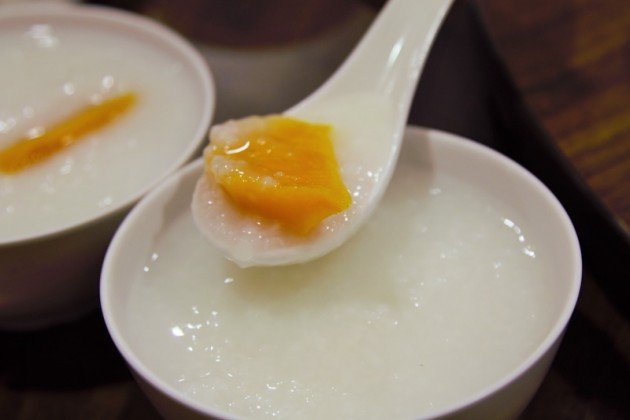 It seems a little silly to introduce the porridge after that entire display of Goldleaf’s dishes considering how this is kind of the star of the show. To be honest, however, the porridge would not be entirely the same without its trusty compatriots all of which were featured above.

Either way, I liked how Goldleaf’s porridge is free-flow and they include a chunk of sweet potato in each bowl of porridge to help add an added bit of flavour. The warm bowl of porridge which is cooked to just the right texture really does a nice job complimenting the numerous savoury dishes. Just to get an added feel of one other carb dish from Goldleaf, we had their Olive Fried Rice ($10) which was very intriguing. I had never tried olive fried rice before that day and was amused by how the flavours of that dish slowly grew on me.

The rice was very fragrant and while I felt that the fried rice was a little too grainy for my liking, I did start to appreciate its texture and the subtle hints of saltiness that occasionally startle you as you eat. 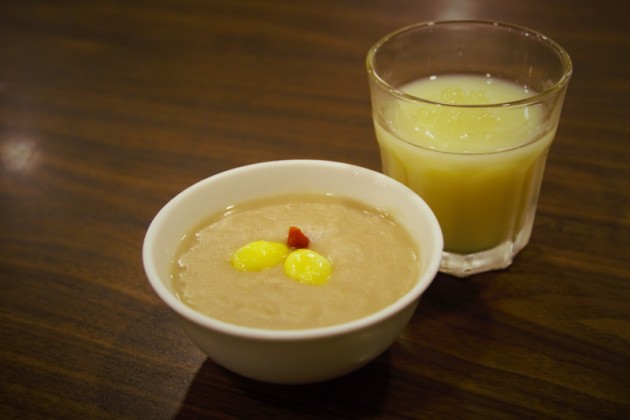 Last but not least, we had a taste of the desserts Goldleaf offers, having one hot and the other cold. Our hot dessert dish was the Yam Paste with Ginko Nuts ($5) which tasted very creamy, a little milky and definitely with powerful yam flavours. The dish was sweet and yet not cloyingly sweet and mouthfuls of this hot creamy paste somehow does warm and soothe your throat.

The second dessert dish we had was cold and is called Longan Tofu ($4). As mentioned by my fellow writer, this jelly-liked dish in a cup tastes like Cheng Teng in pudding form. I found the longan flavour of this “tofu” very refreshing and if I do patronize this restaurant with my friends and family again, I would definitely be ordering this simple yet delectable dessert dish.

The meal we had at Goldleaf was definitely very filling and we left the place wholly satisfied. I know many of my friends love having porridge with their tze-char dishes as it is one of their listed comfort foods which is why I’d definitely bring them to Goldleaf.

Where the flavours of Taiwan come forth rather strongly and for those who’ve been meaning to find your old porridge haunt, look no further, simply make your way down to Amoy street and relive your fond porridge memories.