Chimney cakes first originated from Hungary, and they’re known for their sweet dough that circles around like a cone, with a hollow in the middle. They are perfectly crisp on the outside, yet soft and fluffy on the inside, which makes for a delectable snack.

I first had them in Batam and used to literally travel across the sea just to get it. When I found out Good Food Coffee & Bakery had landed on our shores at VivoCity, I had to drop everything and pay them a visit. 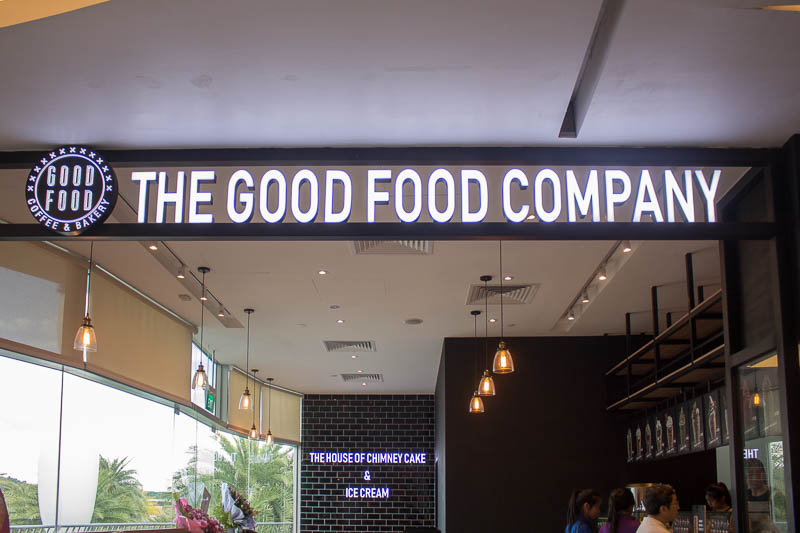 The space has a pretty minimalistic design, with monochromatic furniture that contrasted the natural sunlight from outside. 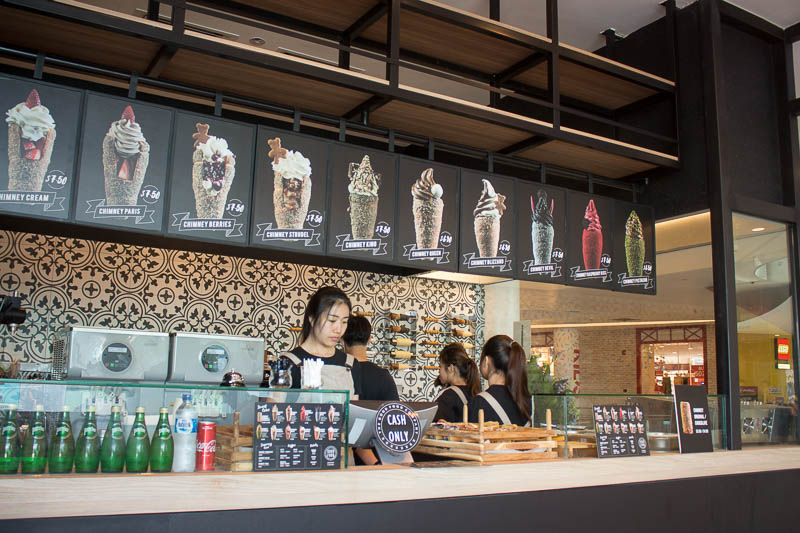 I liked how there were pictures of their cakes across the top of the counter, so you could get a better visual representation of them. At the back of Good Food Coffee & Bakery, I could also see the workers hand-rolling the dough. There was quite a selection to choose from, and we were honestly blown away as they all sounded so unique and delicious. Rayner, the owner, recommended four different chimney cakes for us to try. 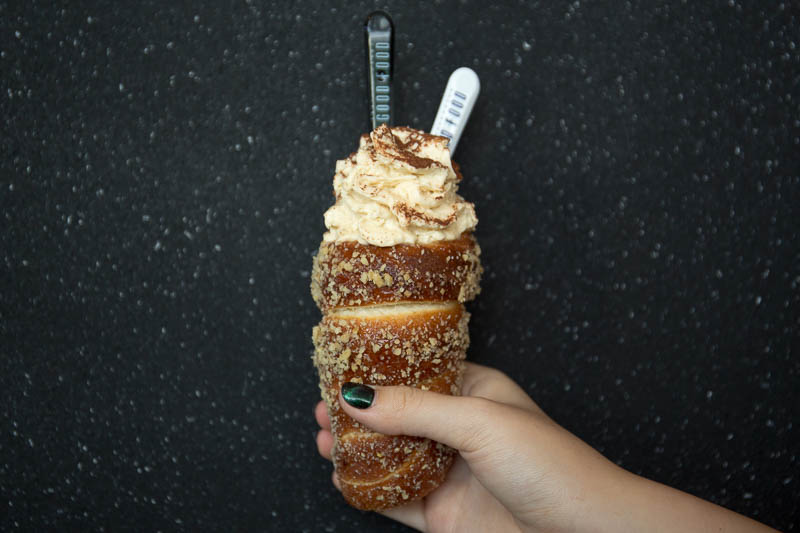 The first that arrived was the Chimney Tiramisu (S$7.50). This was served with whipped tiramisu cream on top and dusted with cocoa powder. To my delight, it was also filled with coffee-soaked ladyfingers in the centre! The chimney cake was really tasty; slightly sweet but not jelak at all. It was served warm, with a crispy exterior stuffed generously with nuts. The centre was soft and fluffy for a nice varying texture. 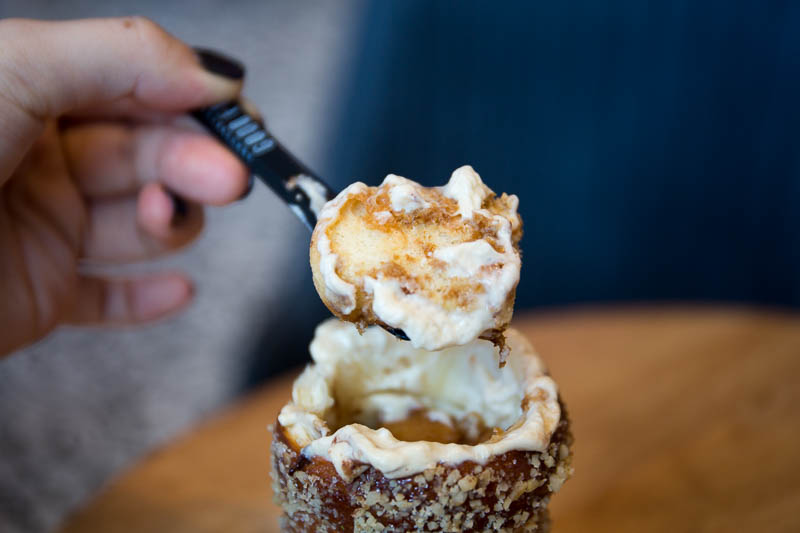 I was glad to find that the whipped cream was soft and light, melt-in-the-mouth perfection. It was fresh, definitely unlike those that came from aerosol tins. There was a subtle tiramisu flavour in the cream that wasn’t too overpowering which I actually preferred.

However, I did feel that the ladyfingers could have been soaked longer for a more distinct coffee flavour. It wasn’t bad, but it tasted more like a vanilla sponge to me. The second one we got from Good Food Coffee & Bakery was the Chimney Pistachio (S$7.50). I was actually the most excited for this one, as pistachios are my favourite nuts. Paired with a pistachio-studded cone and homemade chocolate gelato, I was sure I would love this.

Unfortunately, I was slightly disappointed. Don’t get me wrong though, this wasn’t bad, but just wasn’t as good as I expected it to be. 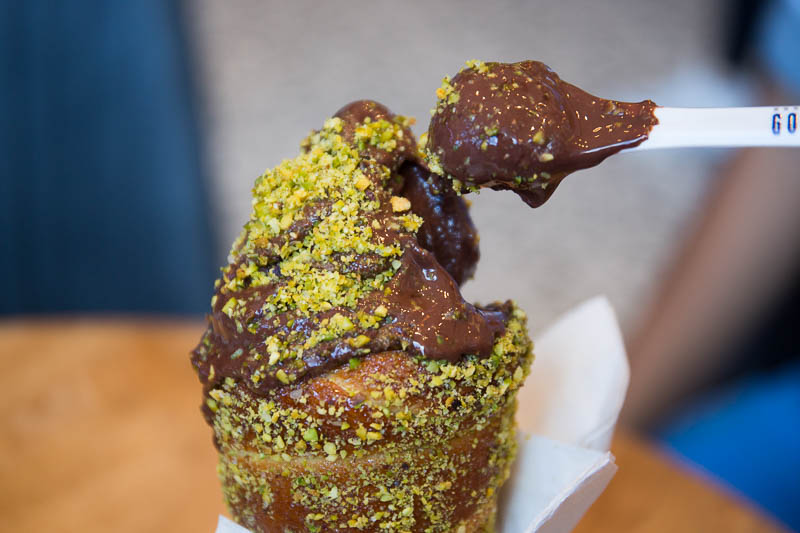 The chocolate gelato was rich and creamy, though the decadence was a slight issue for me. It would have been amazing on its own, but it overpowered the pistachios and chimney cake. 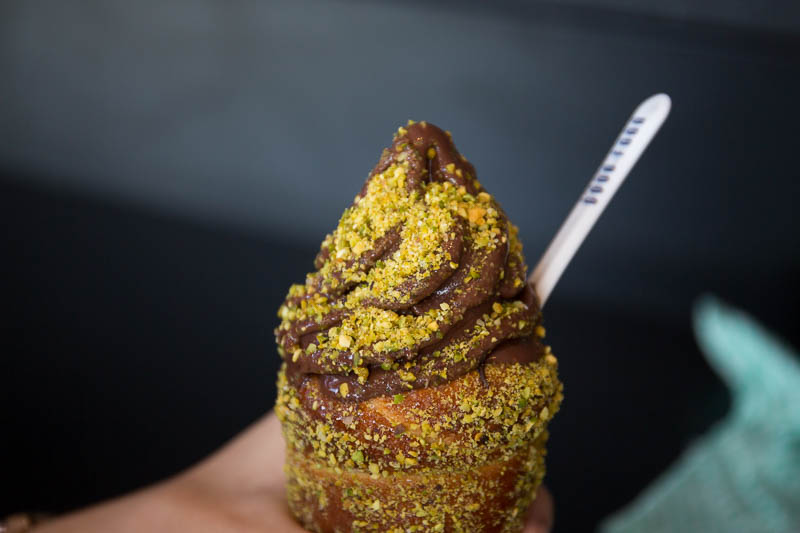 I liked how generous they were with the pistachio bits, which gave a nice contrasting crunch to the smooth gelato. We also got the Chimney King (S$7.90), which was the most Instagrammable of the lot. It had the same delicious chimney cake filled with homemade vanilla gelato, then topped with nuts, two brownie chunks, salted caramel and chocolate drizzle. 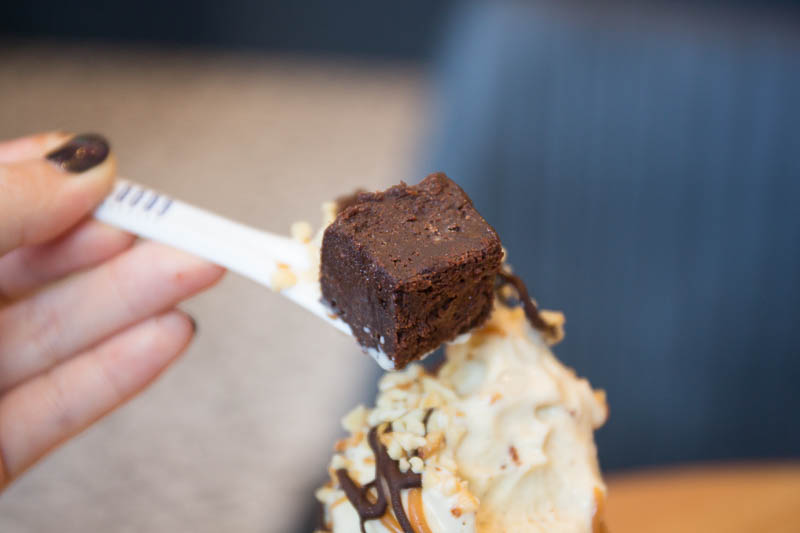 The brownie chunks were chocolatey and fudgy, just the way I like them. Even though they were just toppings, the brownies were fresh with a nice chewy bite to them. The salted caramel and chocolate drizzle hardened on the gelato, adding some crunch to it. The slight saltiness also helped to cut through the richness of the dessert, which was a nice touch. 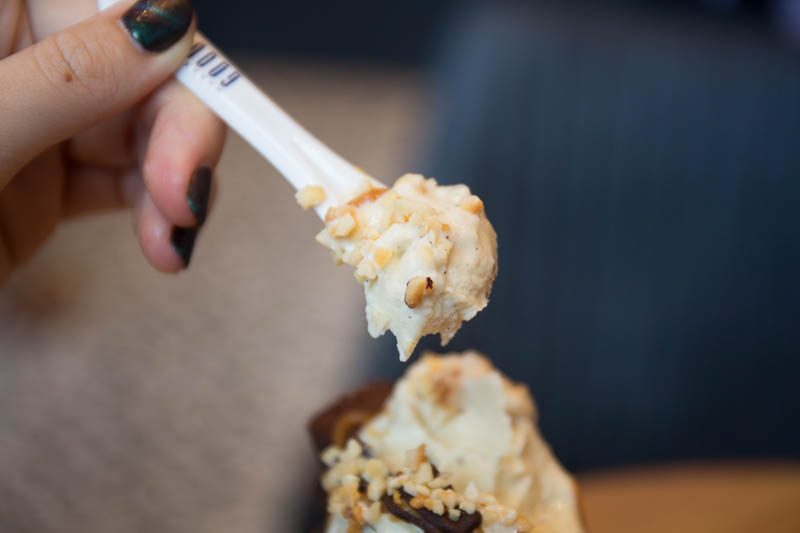 The vanilla gelato had the same silky smooth consistency as its chocolate counterpart. It had distinct notes of fragrant vanilla but was still overall light on the palate for a gelato. I felt that this was a better pairing as it allowed the other components to shine. 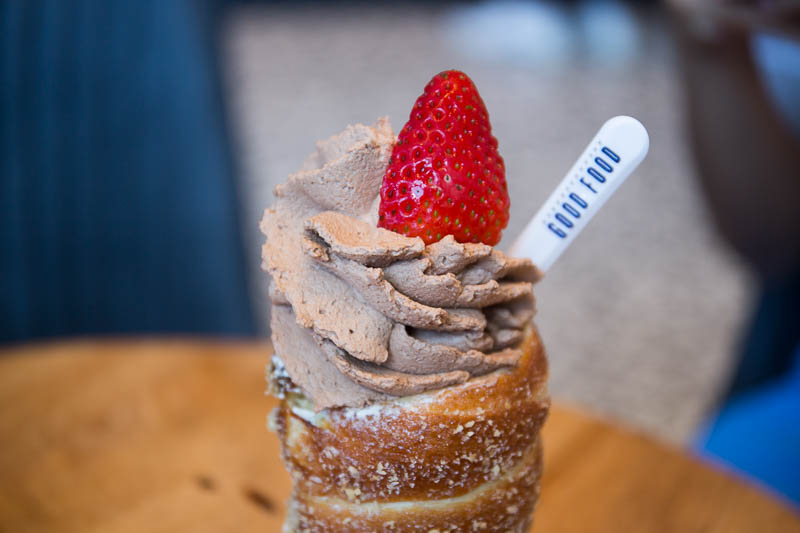 The last one we got was surprisingly my favourite, considering I didn’t expect much of it. This Chimney Paris (S$7.50) was a twist on the classic strawberries and cream. 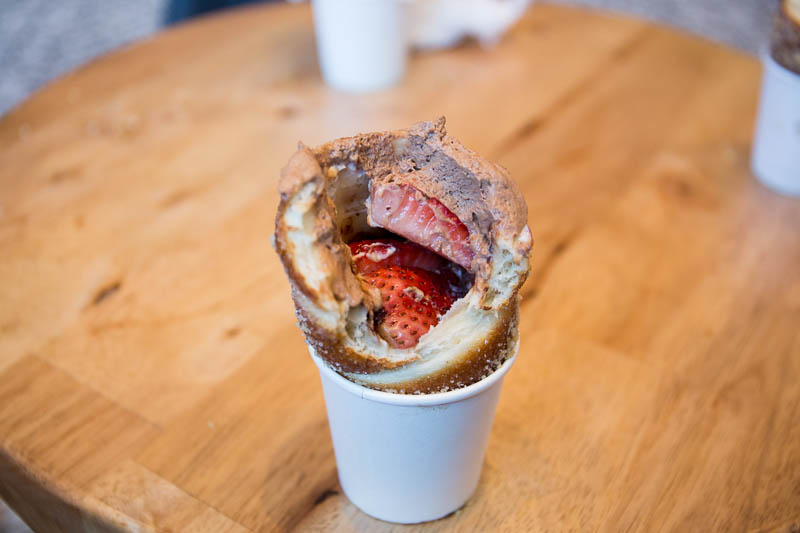 Topped with a slice of fresh strawberry and filled with strawberry slices, the fresh natural sweetness and slight tanginess helped to cut through the heaviness of the cake. 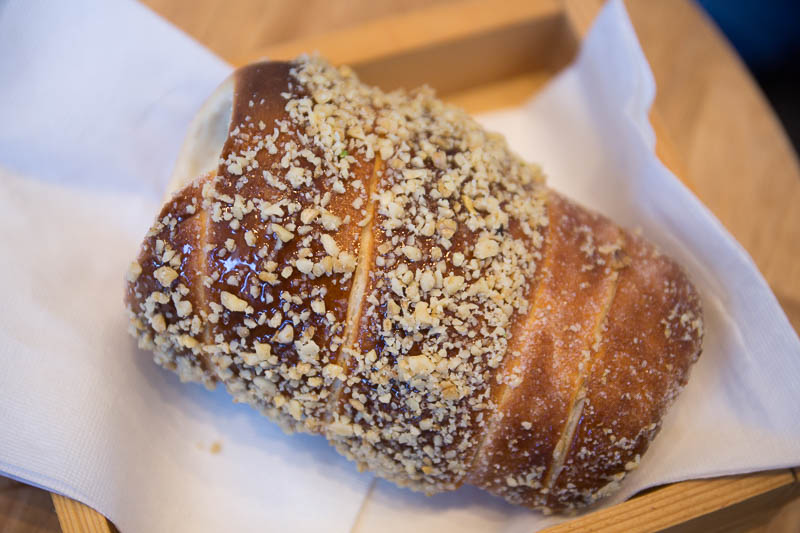 While the whipped cream versions were less messy and heavy on the palate, I still wanted to taste the chimney cones on their own. I got an order of the Chimney Original (S$4.90), which proved that sometimes simplicity is really the best. It was plain, only topped with nuts but tasted absolutely delicious. 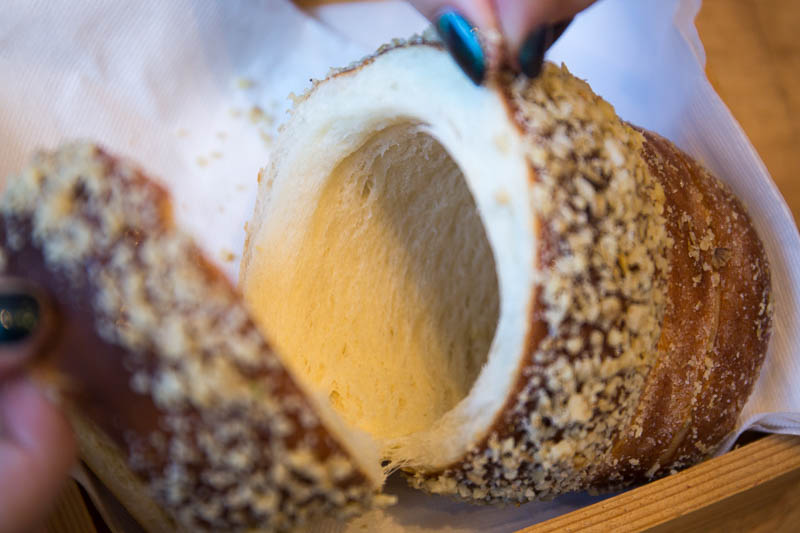 I loved how the sweet dough really stood out, and the texture was impeccable. It was exactly what I mentioned earlier, sans the extra toppings which took the spotlight away from it. Besides sweets, they also offer savoury options and drinks too. Everything is imported all the way from Prague and handmade as well, which I do think is applaudable. With so many great food options at VivoCity now, I predict the huge shopping mall will be more crowded than ever.