While the age of Prohibition is no longer upon us, speakeasies seem to be the new trend in recent years. Despite being a dime a dozen these days, these hidden-away and “secret” bars can be quite the hassle to locate, making it all the more satisfying when we do so.

Here’s a list of 10 of Asia’s best-hidden bars with the coolest locations and most amazing drinks — that is, if you can find them.

Taking its name from the street address (Roppongi, 7th Ward), Roku Nana is considerably difficult to find. Let’s just say you don’t exactly stumble on it on the internet.

Equipped with a gorgeous view overlooking the Tokyo Towers and Roppongi Hills, the rooftop bar also prides itself on its classy interior, perfect for a romantic drink or two. We recommend calling and asking for directions. Doulton Bar is a tiny gem that provides a considerably large collection of whisky, a mix of Japanese and Scottish origins. Run for decades by Minoru Kokuzawa, the bar is hidden from the crowd yet quite ironically one of the most famous speakeasies in Tokyo.

His speciality? A martini created from chilled Beefeater gin and Noilly Prat vermouth, stirred with no ice, one drop of orange bitters, some lemon zest, and an olive.

Themed around Lewis Carroll’s “Alice’s Adventure in Wonderland”, Alice will have you falling down your own rabbit hole. First, follow the white rabbit sign and you will be directed to a small flower shop, where you will then have to try to locate the entrance.

When you do, you’ll find yourself in a lounge-style bar that serves fancy, experimental cocktails and delightful bar bites. The bar prides itself on its wide eclectic selection of surprises – from drinking cocktails from an ‘elephant’s trunk’, to disappearing bar glasses and clocks that do not tick, and even a healthy dose of liquid nitrogen magic.

I don’t know about you, but I’ve definitely found my wonderland.

Inside, you’ll find yourself surrounded by a gorgeous interior featuring mahogany furnishings, dimly lit fluorescent lights, leather couches and marble tables that seem to transport one to 1920s New York.

With a menu also inspired by Charles H’s recorded recipes, each page is themed with a city in mind. You’ll even be treated to a light cocktail and some snacks as part of the cover charge.

Just like the cliche scenes from any spy flick, Le Chamber hides behind a small bookshelf and can only be reached when you pull the correct book.

Upon entering, you’ll be brought into a luxurious world of sophistication, which stems from its elegant furnishings (think crystal chandeliers, dark leather seats), lavish pricing and first-class service.

Home to some of Korea’s finest bartenders, Lim Jae-jin, Eom Do-hwan and Park Sung-min, you know you will be in good hands.

Walking along Yongjia Street in Shanghai, never let this seemingly authentic hair salon fool you. Hiding behind the facade of a 1930s barber shop, the Barber Shop is actually one of the many cool speakeasies in Shanghai.

Entering its overly-clean premises, you’ll have to fumble with some bottles on the shelves to reveal the hidden entrance.

Inside, you’ll be greeted by the main bar along with an outdoor area further back. Drinks are somewhat pricey here, with a basic cocktail selling at RMB 80 (S$16), but this should in no way deter you as they are delicious.

There is no doubt that Speak Low is Shanghai’s most popular speakeasy. Comfortably situated behind the counter of a bartending equipment shop, the bar is reputed for its lively ambience as well as another hidden secret.

That’s right – within the speakeasy lies another hidden bar on the upper level for those who seek a quieter refuge. The Japanese-style bar is spread over four floors, each having its own concept and menu. However, the last floor is strictly reserved for VIPs.

You can opt to savour their creative mixes such as the Sawadee-cup, made from a blend of buttered rum, Thai ice tea and tapioca, at RMB 95 (S$19.20+). Albeit on the pricey side, I’m positive that the experience here is well-worth the yuan.

In what seems like an old school Chinese movie theatre hides one of the city’s speakeasy retro-modern bars – HANZO 60. Unpretentious, down to earth and with vivid hues of neon red and pink, HANZO 60 fuses a minimalist interior design with funky elements of art, which reminds me of a typical Taiwanese romance film. With an exterior that resembles a modernised display of Traditional Chinese herbs (from Eu Yan Seng nonetheless), The Library is itself an inconspicuous building.

Entry to the bar requires a password, which changes every week and can be found on its social media page, or succumb to the doorman’s requests – which can range from telling a cheesy joke to conjuring up a fancy dance. 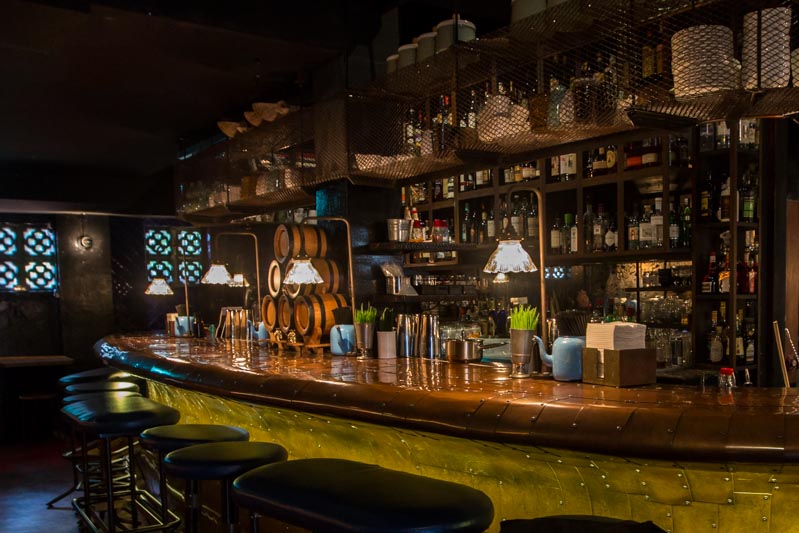 With an interior that oozes a funky steampunk theme, The Library’s selection of drinks is sure to impress. In collaboration with Eu Yan Seng, the bar has released a series of cocktails infused with Traditional Chinese Herbs.

If you haven’t had a sip of these local brews with foraged herbs, it’s time you get one now. 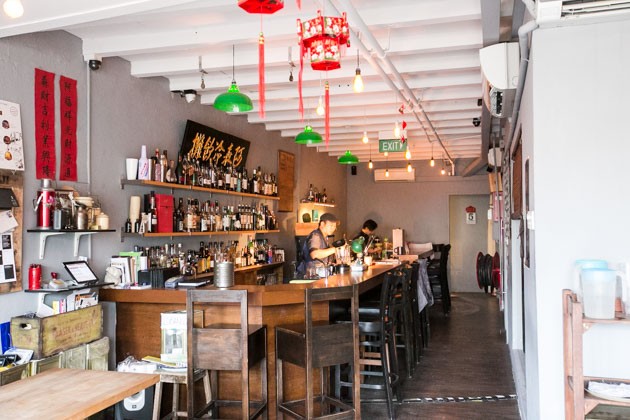 Located in Boat Quay, the adorable Ah Sam Cold Drink Stall with its old school furnishings is sure to bring Singaporeans back down memory lane. Soak in the wonderful homely atmosphere and let the bartenders surprise you.

At Ah Sam, there is no menu for you to choose from. All you have to do is to head up to the bar counter and tell them what you would like to have, and you can pretty much leave it up to them. But getting there is hard. Your only clue? This run-of-the-mill mini signboard placed under a shady spa massage sign. We like the challenge.

Previous articleAquaholic Pool Party: Cool Off With A Drink Or Two & Show Off Your Bikini Bods At FOC Sentosa This 3 Sep ’17
Next articleChikin: Have A Numbingly Good Time With Sumptuous Szechuan Skewers & Cocktail Infusions At This Yakitori Bar In Bukit Pasoh