Hougang 6 Miles Famous Muah Chee: This Traditional Stall In Toa Payoh Is The Last Of Its Kind In SG

A recent tasting reminded me of a favourite childhood snack, muah chee, a traditional dish made of glutinous rice covered in ground peanuts. As usual, I thought with my stomach first and a quick Google search left me puzzled. Where did all the muah chee stalls go? In fact, only one result popped up — Hougang 6 Miles Famous Muah Chee (if you don’t believe me, just Google it!).

I was shook. I’ve heard plenty about disappearing old-school foods in Singapore, but I never expected it to be so tangible, and so near in the future. Is muah chee really vanishing from Singapore?

With our office located in Toa Payoh, I actually pass this humble stall unknowingly a few times a week to grab my regular mala fix at Gourmet Paradise, a food court in Toa Payoh Hub where it’s located. 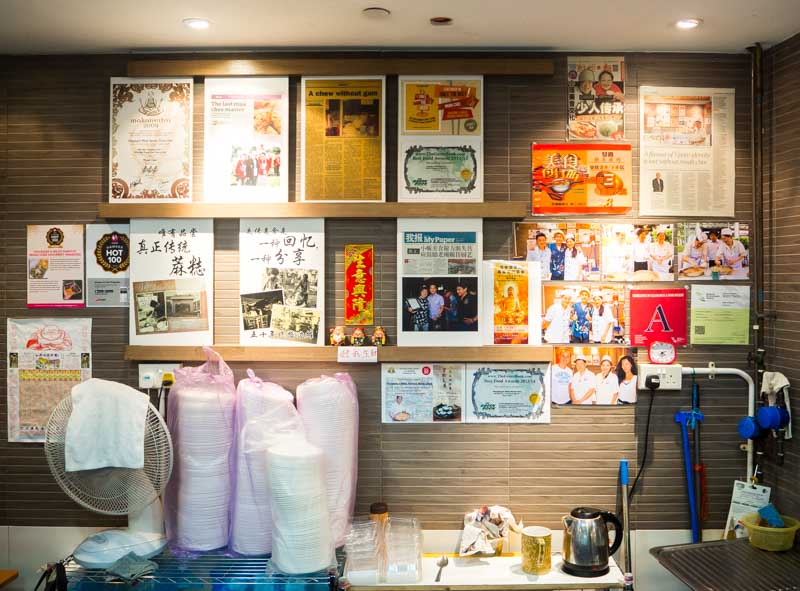 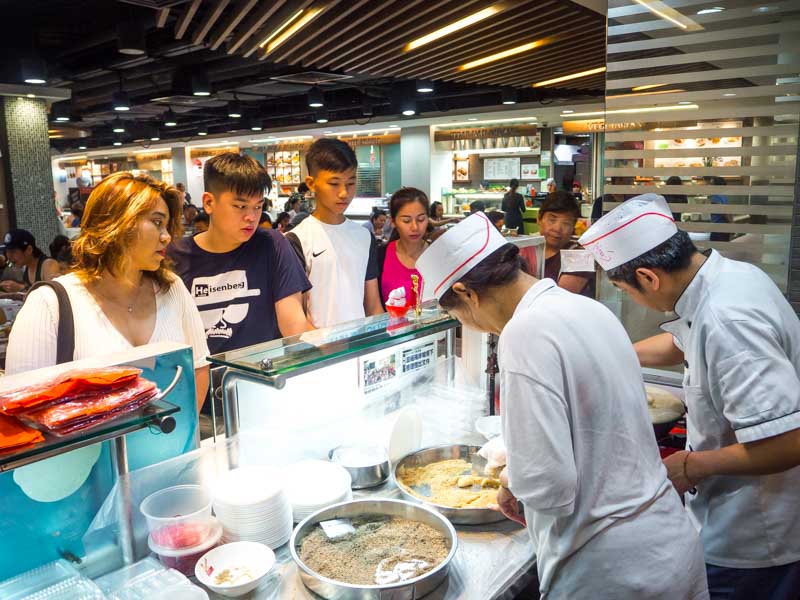 They aren’t without reason, as Hougang 6 Miles Famous Muah Chee draws a long steady queue throughout the day, keeping owner Mr Teo Yong Joo and his wife perpetually on their feet.

As far as we know, Mr Teo is the last of the muah chee men who make the simple snack the traditional way (we’ll get into this in a bit). So I decided to take a short walk over and check out the last stall holding the fort for traditional muah chee. 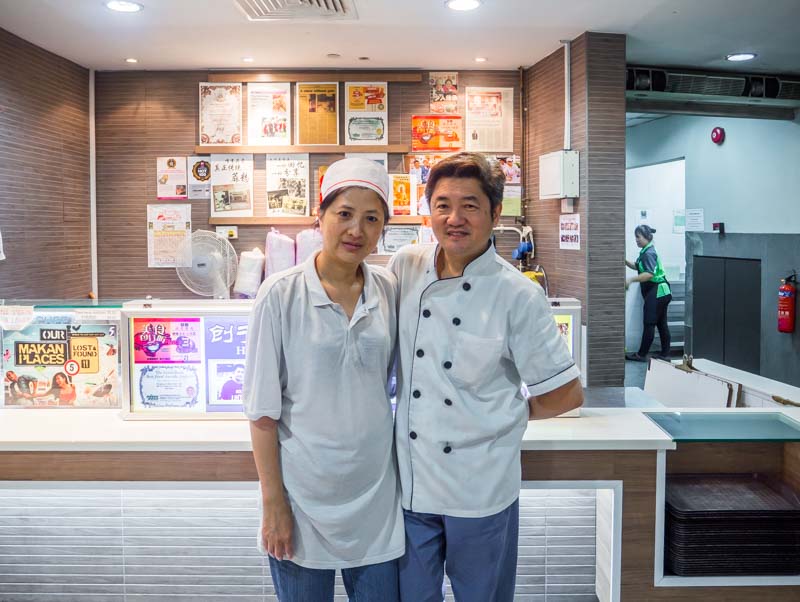 Mr Teo started out when he was just 14 helping his father at his Simon Road Market stall. Now 54, Mr Teo carries on his family’s recipe and has been making muah chee for over four decades, manning the store in Hougang before moving over to Toa Payoh around five years ago.

He tried to venture out by serving other traditional snacks such as fa gao (Chinese prosperity cake), but the expanded menu slowly dwindled away as the manpower reduced to just him and his wife. One thing has never changed – his muah chee, which he insists on making the traditional way.

He explained, “Traditional muah chee is shaped by hand, and served without any filling, with a bit of shallot oil.“ 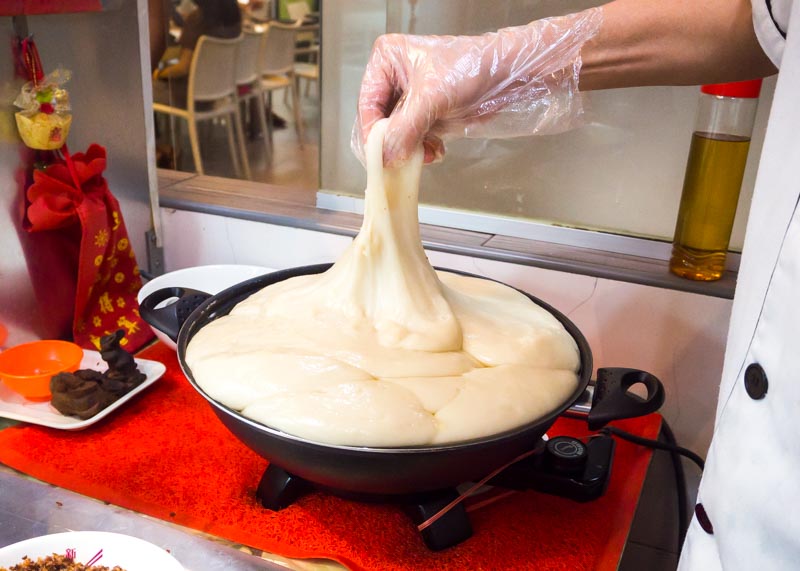 One of the first things you’ll notice is that Mr Teo even nips the muah chee pieces from the main bowl by hand, instead of using scissors. Turns out that this is the actual way to do it, as cutting with scissors would cause the muah chee to lose its bounciness.

Mr Teo also shared that the entire process takes him around seven hours to prepare the ingredients alone. Each batch is made daily to preserve quality, and Mr Teo’s daily routine includes grinding the peanuts by hand (not from a supplier) and the brawny work of ‘beating’ the muah chee. Don’t worry if you’re raising your eyebrows in disbelief, I was too. Mr Teo explained it to me by using the example of tenderising pork by pounding it. Similarly, ‘beating’ the muah chee creates a soft but springy texture.

Most of the stalls you see in shopping malls that serve muah chee skip this traditional step, choosing to simply put their muah chee in the microwave instead. It does the job, but the bounciness is lost, which is why Mr Teo insists on this step despite the laborious and back-breaking task. Each ball of glutinous rice is then dabbed into fragrant shallot oil for flavour. This step cannot be overstated, as, without it, you’ll just be left with a bland chunk of glutinous flour. 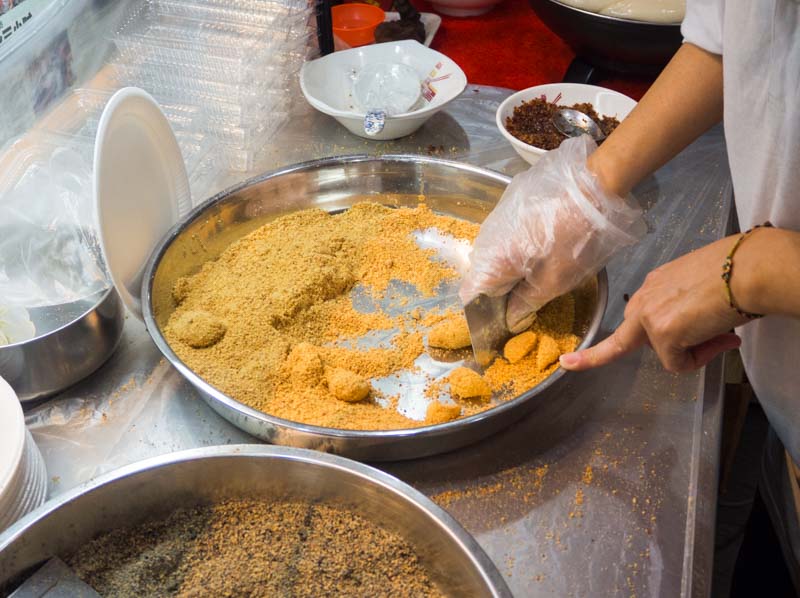 Finally, the glutinous rice is cut into smaller pieces and rolled in ground peanuts to form the nutty coating. The process may seem simple, but believe me, each individual component requires attention to detail and ultimately, lots of time.

A usual day for Mr Teo begins at 4am, which is just enough time for him to prepare the ingredients before service at 12pm. I don’t even remember the last time I woke up at 4am!

Is There A Difference? 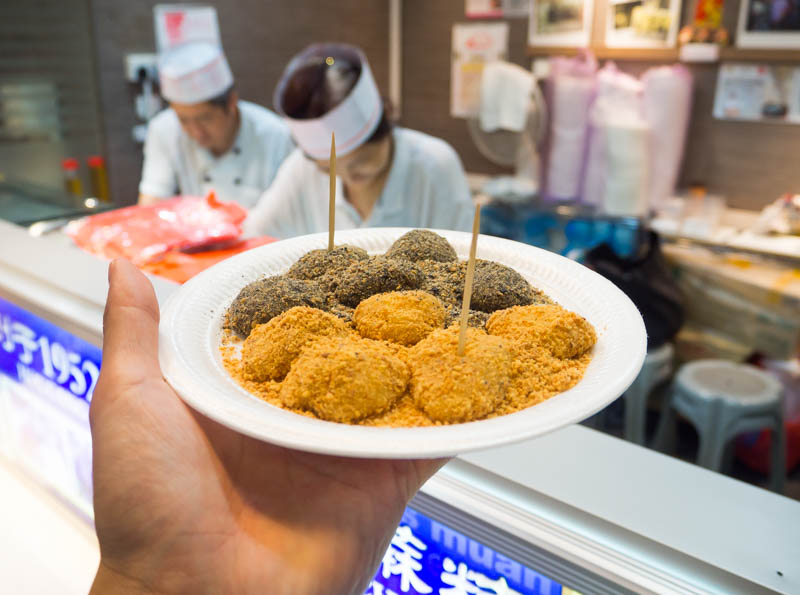 Of course, I had to check out if the old traditional way really is better. After seeing the muah chee materialise, I was itching for a bite. 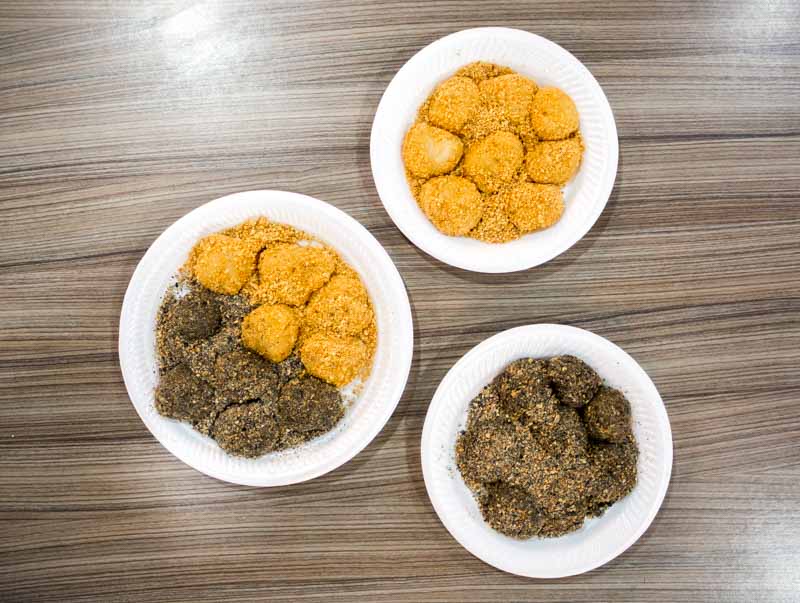 $5.50 may seem a bit pricey for muah chee, but considering the meticulous steps Mr Teo takes in preparing the ingredients, the price is definitely justified. I started with the traditional Peanut Muah Chee. Cut into bite-sizes, it’s served with a generous amount of peanuts that Mr Teo prepares in-house. The peanuts are toasted and finely-ground, oozing a strong aroma that complemented the subtler taste of the glutinous rice.

The texture really hit the spot, tender with the right amount of chew. After trying one, I assure you that you’ll be able to tell the difference between factory-made muah chee and the real deal! For something more unique, dig into his famous Black Sesame Muah Chee. It does require a little more effort however, as Mr Teo lamented. The black sesame ingredient is pricier and more preparation has to be put in to ground it into the fine powder that Mr Teo achieves. 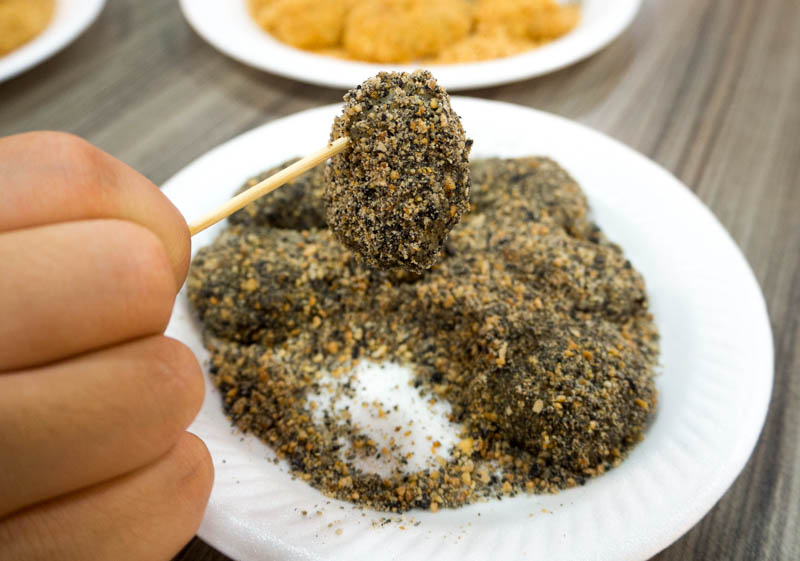 Between the two, the Black Sesame Muah Chee won hands down. The black sesame coating permeated a stronger roasted flavour than the peanut, which had me hooked from the first bite. If you’re a fan of Japanese kurogoma, you’re certain to love this! 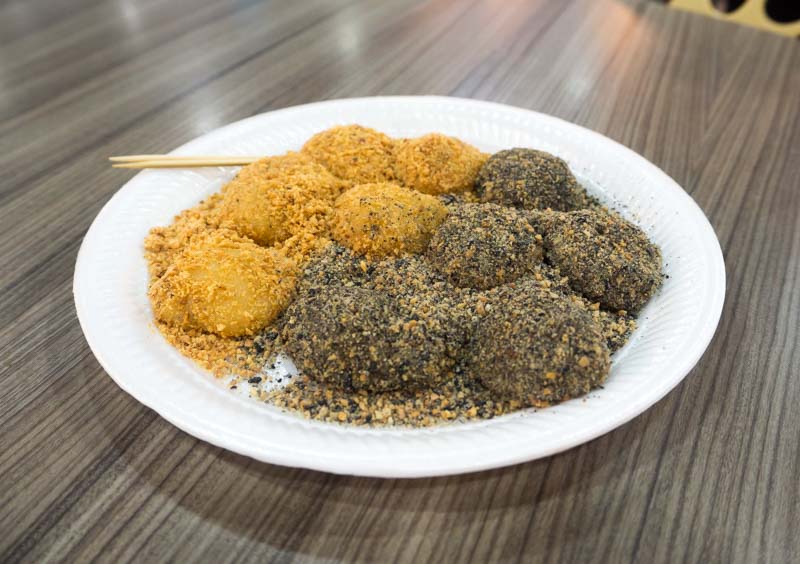 If you’re still indecisive, thankfully, you don’t have to pick. At Hougang 6 Miles Famous Muah Chee, you can get both Peanut and Black Sesame Muah Chee in the same serving! It’s only available for Medium and Large servings though, but trust me, it’ll be well-worth your bucks.

After trying Mr Teo’s muah chee, there really was no going back to factory-made muah chee for me again. But in a few years time, will I even have a choice? For one, a serving of Mr Teo’s muah chee sells for as low as $2.50. Muah chee is a dessert, which won’t garner the same lunch crowds that frequent the usual chicken rice and laksa stalls.

Even with throngs of customers, it’s going to be difficult to meet inflating rentals with such dismal returns. 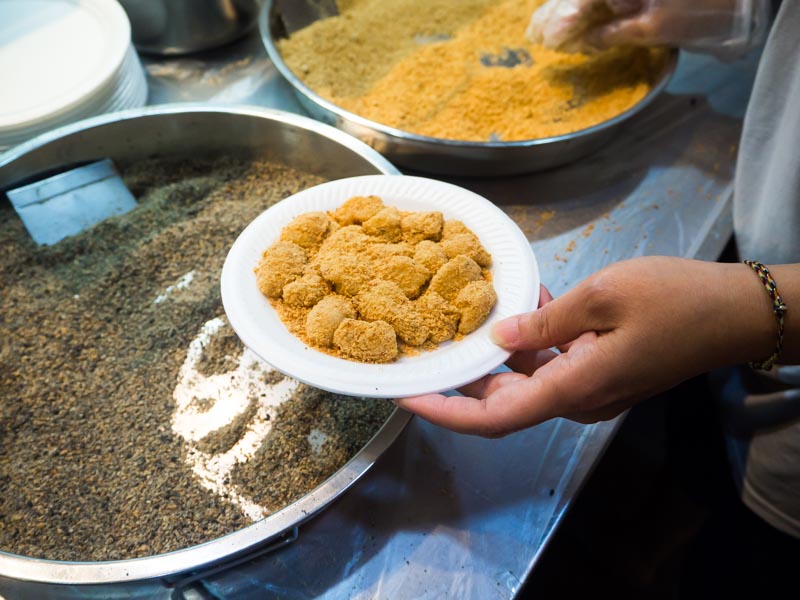 Mr Teo shared that the tough economic circumstances have forced many of his fellow muah chee men into retirement. He’s even tried training apprentices, but many have given up along the way as the low monetary reward never seems worth the long hours.

It’s a bleak image, but practical reasons can often come in the way of passion. And yet, Mr Teo continues making the fickle snack, sacrificing both time and sleep to perfect it.

This is why people like Mr Teo who’s hustled through this tough industry have earned my whole-hearted respect. 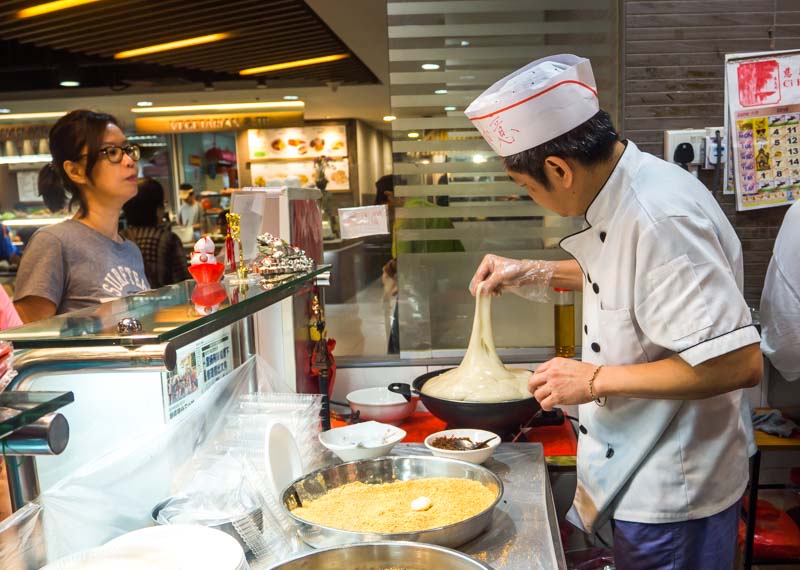 It turns out even in Taiwan, most muah chee sellers don’t make the balls by hand anymore. They have heard rumours of a stall that still makes it the old-school way by hand, however; and yes, that’s Mr Teo!

So, Is This The End? 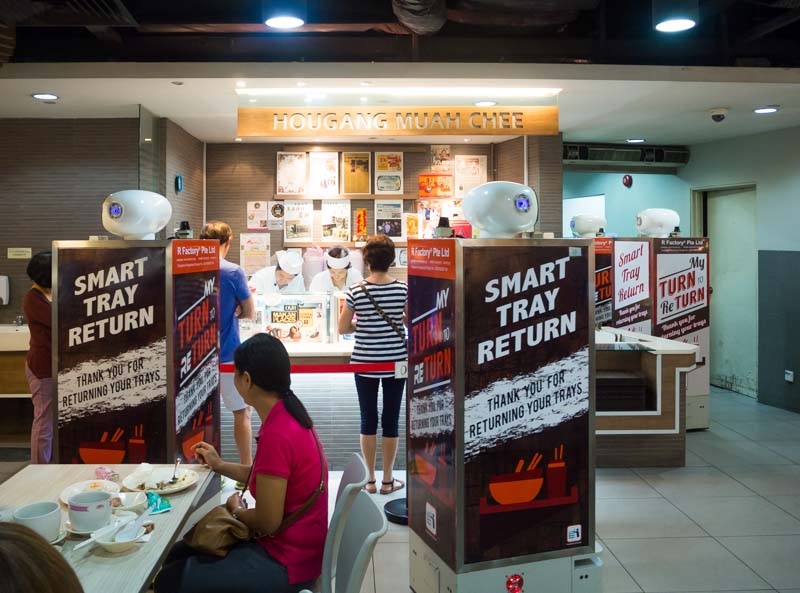 One of the things you’ll notice when you come to Mr Teo’s muah chee stall is the self-automated tray return robots whizzing around the food court – which serve as a reminder of the fast-advancing world we live in that leaves us on the precipice of deciding if old traditions are worth saving. For Mr Teo, he currently has no successors to replace him when he chooses to retire. Even though he has children, the life will be tough and Mr Teo hopes his children won’t have to live through that.

So when he eventually closes shop, it really might mean the end for traditional muah chee in Singapore. 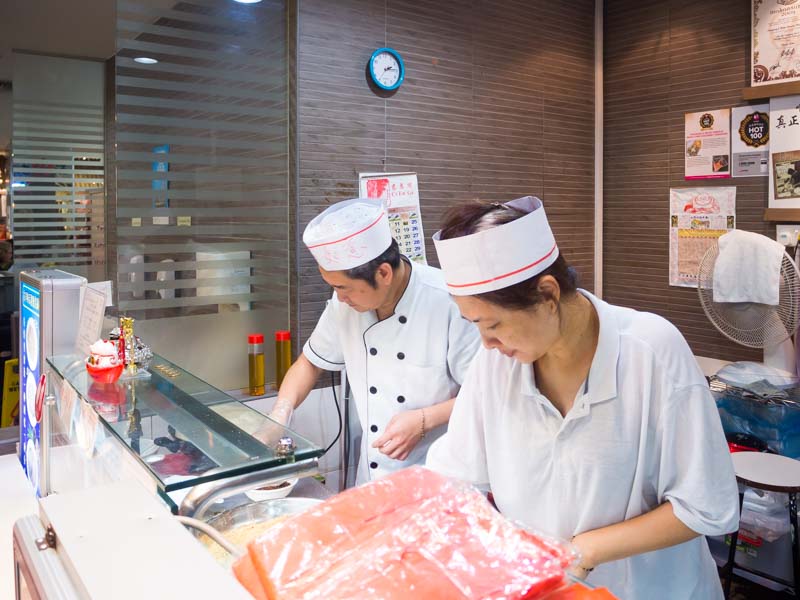 More definitely has to be done to combat the ridiculous rentals, so hardworking people like Mr Teo and his wife can continue doing what they love. Even more so, we must preserve our disappearing dishes that flavour Singapore’s iconic food scene. We aren’t Singaporeans without our food, are we?

As for me, I still believe in the old-school dishes, and I pray that these traditional snacks stay for generations to come. Mr Teo’s muah chee definitely lives up to the hype, so if there’s anyone who can keep traditional muah chee alive, my money’s definitely on him!