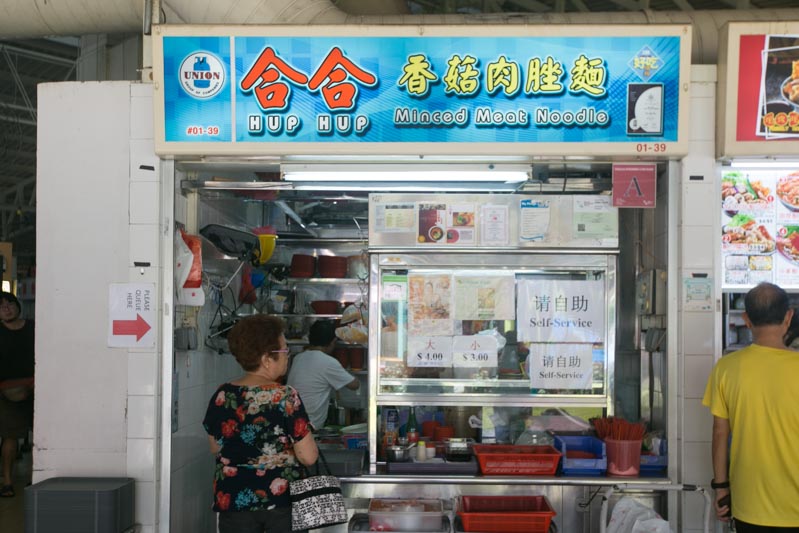 This second-generation hawker is famed for its old-school bak chor mee, with starchier noodles and large, round-shaped wanton crackers. A bowl goes for S$3/Small or S$4/Large, which is pretty affordable if you ask me!

It only has one dish on its menu: Bak Chor Mee. You can ask for dry or soup, and as for noodle choices, Hup Hup only serves mee pok or mee kia. 724 Ang Mo Kio Central Market & Food Centre is one of the many hawker centres in AMK, but it’s certainly made a name for itself.

Just by sitting there for an hour or two, I could tell that it was super popular among the locals. Hup Hup’s queue was never-ending, and I could see many people patronising every stall along the stretch I was seated at. Immediately, I noticed how huge the bowl was — it was bigger than my hand! Not to mention, the noodles were hidden under three large crackers, which were partially doused with gravy. Upon scooping through my bowl, I was pretty pleased to see a generous amount of mee pok, toppings, as well as gravy, underneath the large rice crackers. The mee pok was springy and smooth, despite being a little thicker and starchier than regular mee pok noodles. 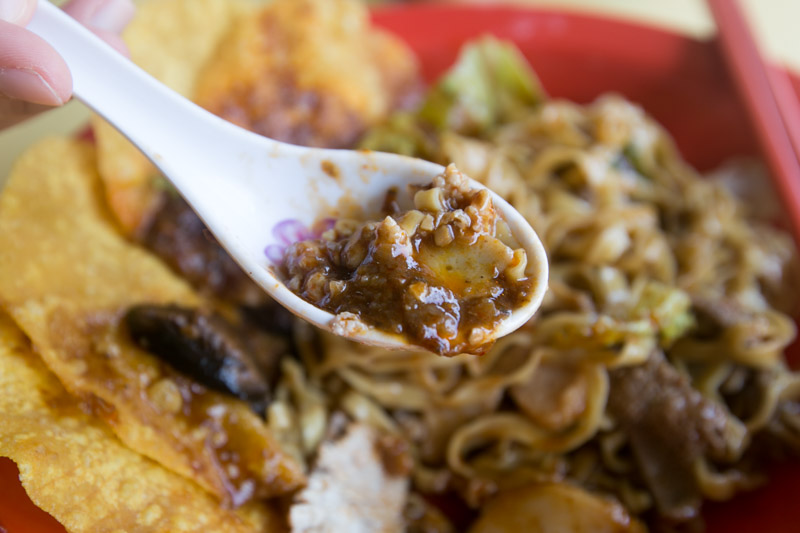 To my surprise, the thick noodles went well with the full-bodied chilli gravy, which was more ketchup-based rather than vinegar-based, like other bak chor mee noodles. It had a spicy kick, which reminded me of dried shrimp sambal belachan.

If you love savoury, saltier and heavier flavours, then Hup Hup’s bak chor mee will definitely be up your alley. 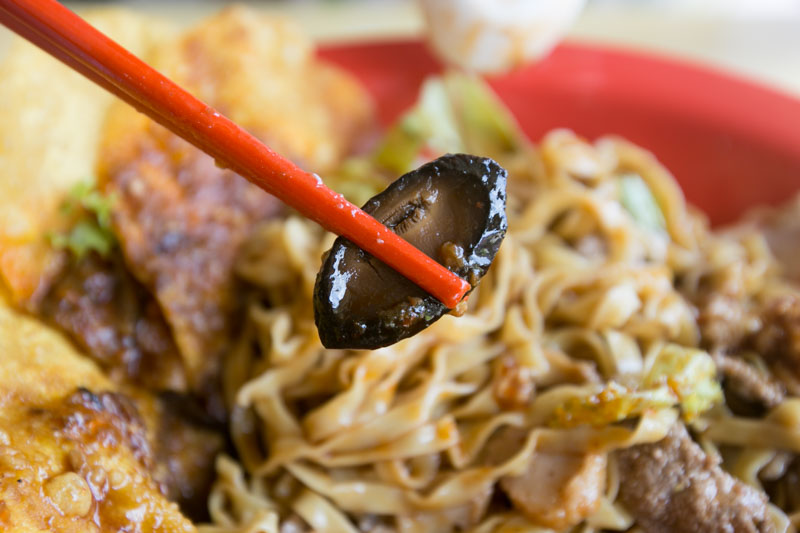 The one thing I noticed was how plump and juicy its mushrooms were.

Sure, sliced mushrooms are a staple when it comes to bak chor mee, but this was the first stall that had such juicy mushrooms. Silky and chewy, it was dripping with gravy, a sure sign that it had been soaked for an hour at least prior to being cooked.

The mushrooms used were also of a more premium grade, which made every bite all the more succulent. 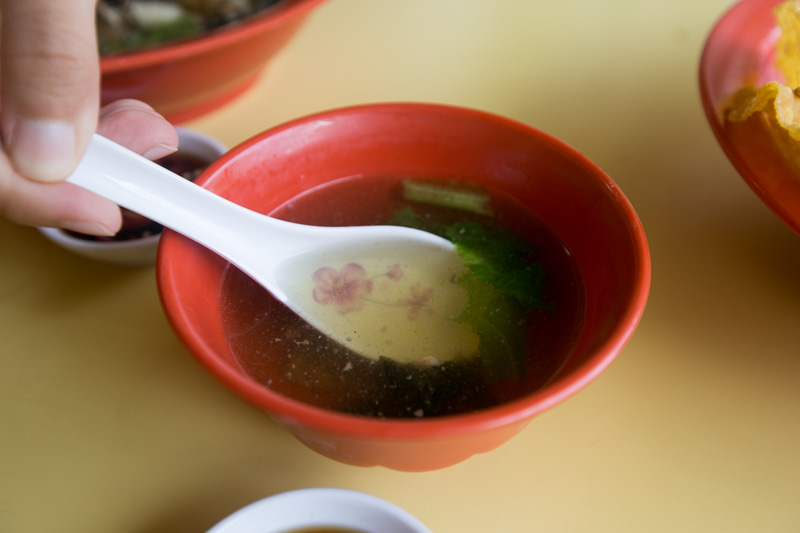 It also came with a small bowl of soup — perfect for drizzling over your mee pok just in case it’s too dry.

What I found particularly unique about Hup Hup’s soup was that it had seaweed in it, which is different from other bak chor mee stalls.

Though simple, having seaweed gave it a fresh and salty touch, just like Korean seaweed soup that’s comforting and soothing on a rainy day. The large round crackers were made of wonton skin and fried till a glorious golden brown.

It was slightly oily and papery, and though it tasted a little bland on its own, I loved soaking it in Hup Hup’s bak chor mee gravy, which was peppery and salty.

However, don’t leave the crackers in the gravy for too long because it can get soggy pretty quickly. 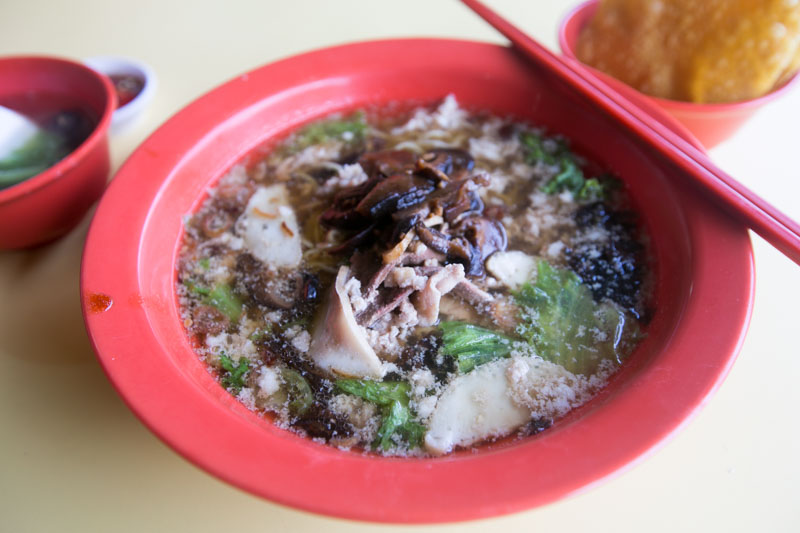 The first thing I noticed was how full-bodied and cloudy the soup was, a sure sign that it had been boiled in pork bones for a long time and topped with freshly ground minced pork.

It also had a faint seaweed-like taste, which added a tinge of umami flavour to the soup. 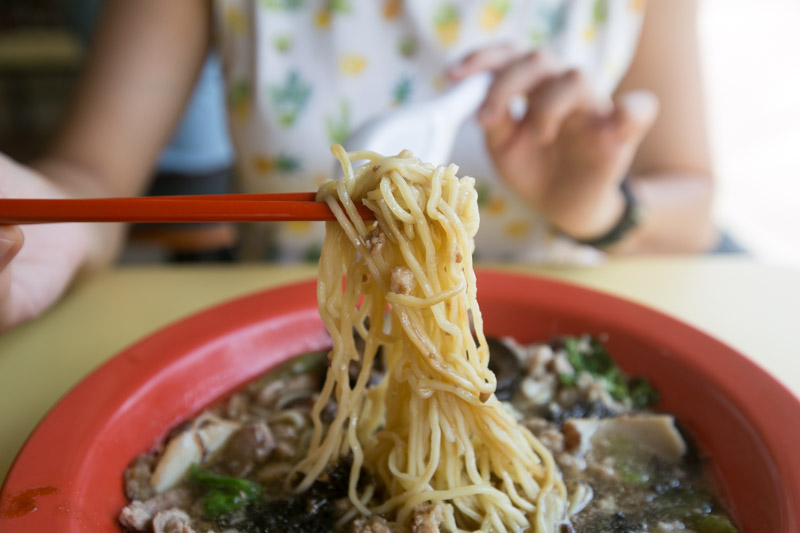 The mee kia was thinner than the mee pok and as a result, it was easier to slurp and bite.

I preferred this as compared to the mee pok and absolutely loved how slurp-worthy it was to just continuously sip on the yummy soup and gobble up the silky noodles. 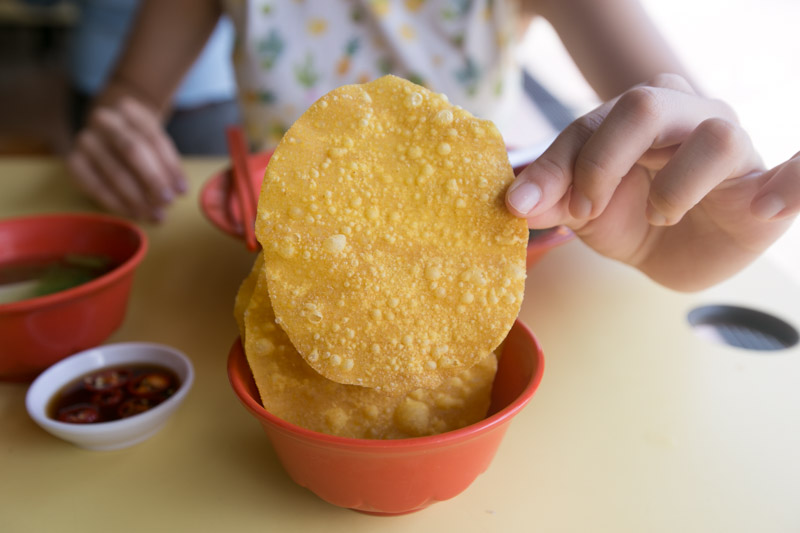 Fried wonton crackers come alongside the soup version, but they’re placed in a separate bowl so you can enjoy the crispiness and oiliness of the crackers.

Because the crackers were a tad too dry to be eaten by itself, I ended up dipping them in my soup for added flavour.

The mee pok, though pretty delicious, was a little too thick for my preference and it ended up being jelak after a couple of mouthfuls because of how heavy the noodles and gravy were.

To me, the mee kia‘s thickness and texture were just nice, and would have gone fabulously with the dry chilli gravy.