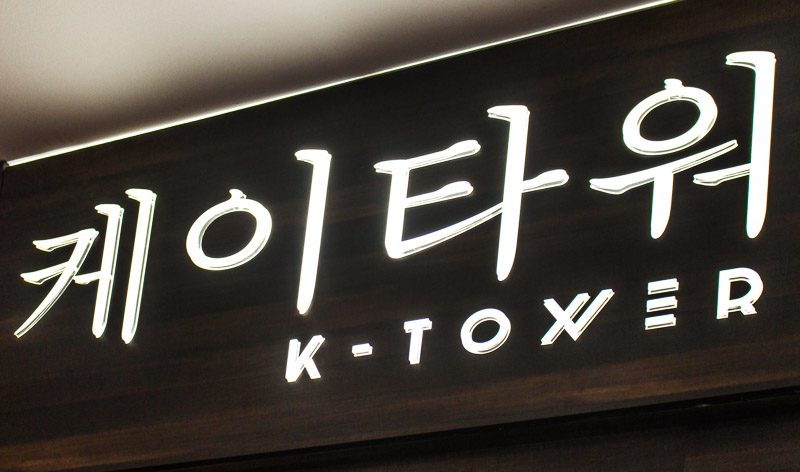 Bringing the Korean steamboat tower trend to Amoy Street, K-Tower offers three- to nine-tiered towers of fresh seafood. Helmed by Chef Sky who specialises in Korean cuisine, customers who patronise the restaurant can rest assure that the food is in good hands.

The restaurant uses tanks to keep their assortment of live seafood, including prawns, crabs, lobsters and more. 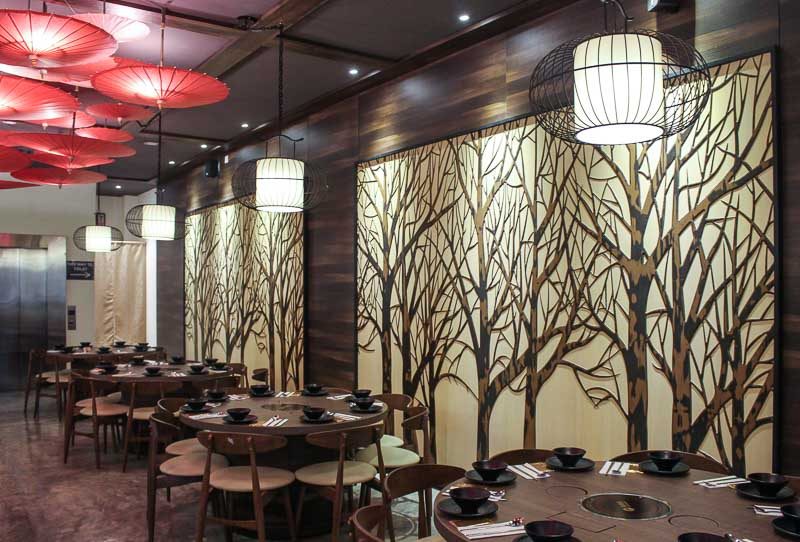 Within K-Tower is an absolutely stunning interior filled with red umbrellas that are lit, as well as classy lamps shaped like lanterns. Adorning the walls are also some very tasteful decor that is not only aesthetically-pleasing, but gives the restaurant its character. 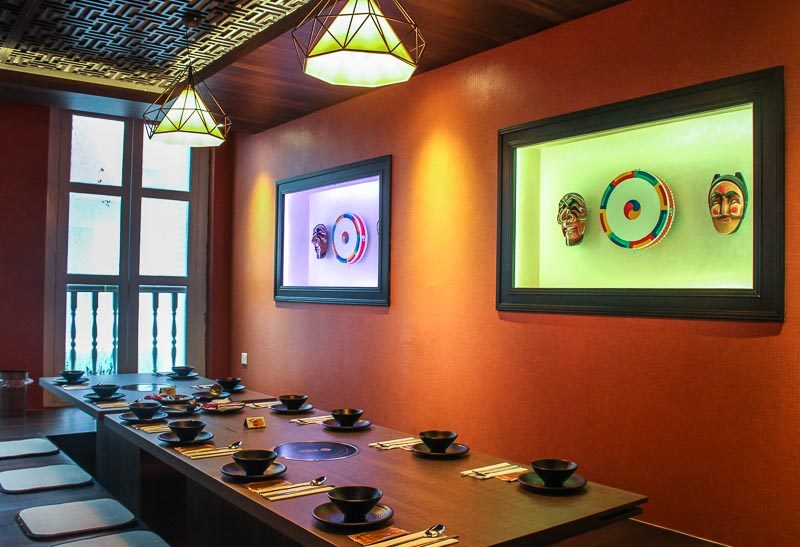 For those who wish to dine in a more private setting, you can head up to the second level of the restaurant where a more intimate dining area awaits. This would be the perfect spot for family gatherings or even, corporate events. 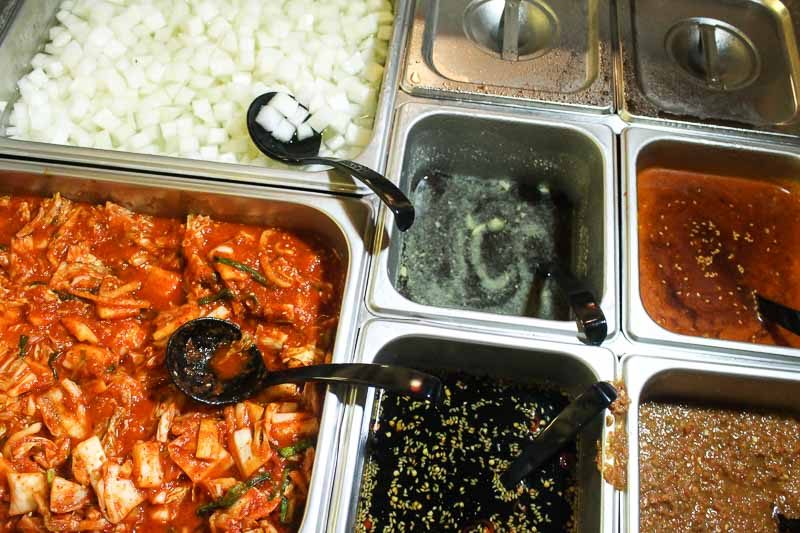 As with every Korean restaurant, complimentary Banchan dishes are served. At the corner of the second floor, there is a self-service station where guests can help themselves to as much kimichi, radish and sauces as they please. You’d be delighted to know that all these are made in-house by the chef. 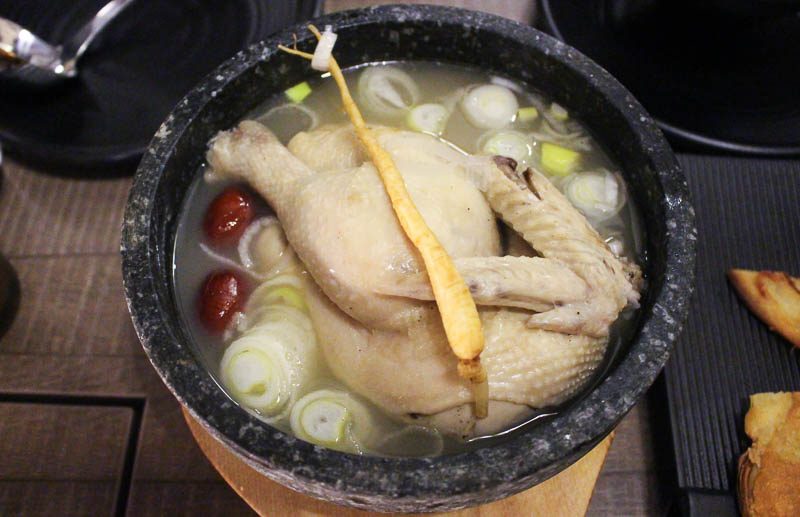 Before we dived into the steamboat tower, we had a bowl of Ginseng Chicken Soup ($17.90). Made with chicken and Korean ginseng, the broth was both nourishing and refreshing; certainly a great start to the huge feast that lay ahead of us. 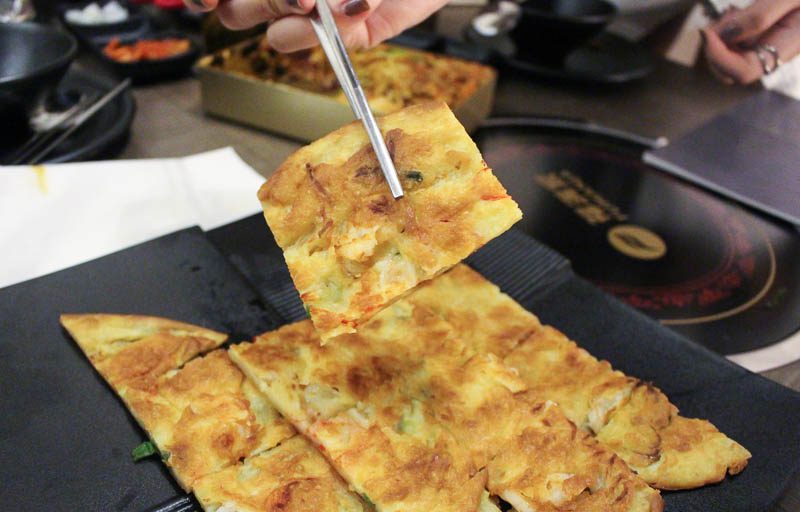 Another popular Korean dish we got to savour was the Seafood Pancake ($14.90). Crisp at the edges with bits of seafood embedded within, the thin pancake was tasty and served as a great appetiser. The fact that it was not too oily was also a welcome bonus. 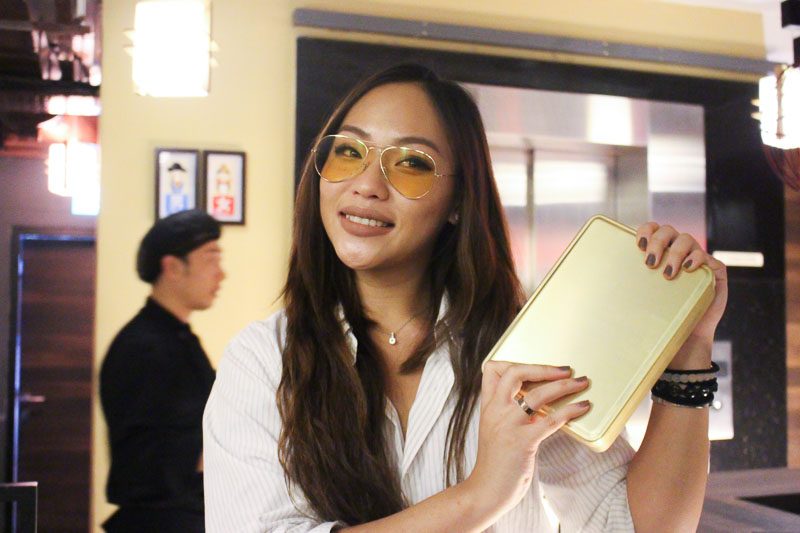 Known widely as a “childhood lunchbox” from South Korea, we tried the Shake Shake Rice Box ($9.90), which has a concept similar to that of Bibimbap, but instead of mixing the ingredients around, you shake it. 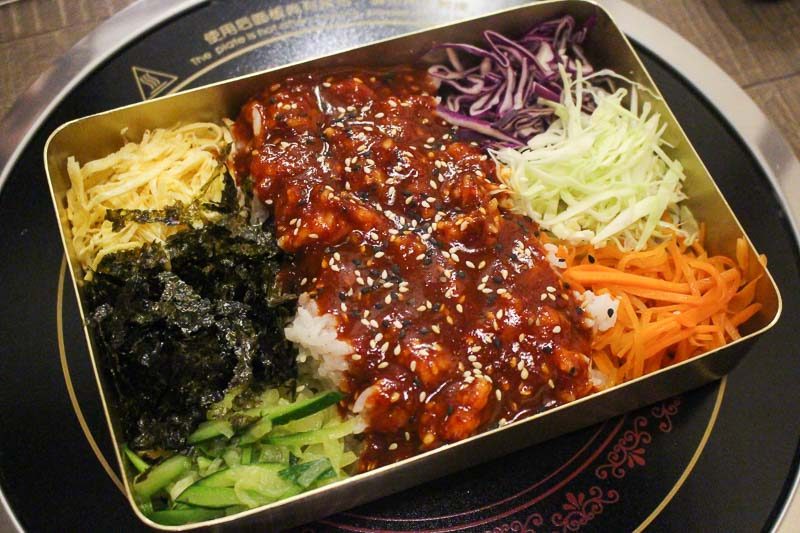 Fresh ingredients within the box included egg, cucumber, cabbage and carrot strips, along with some nori flakes, and of course, bibimbap sauce. Additional meats such as pork, chicken or beef can also be requested for with a top-up of $2. 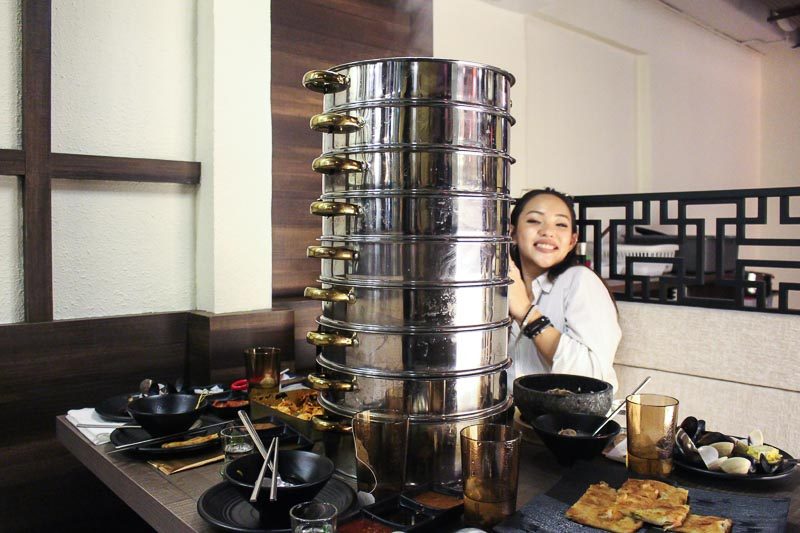 Behold, the enormous 9-Tier Seafood Tower ($298). Holding a different seafood ingredient in each tier, you can expect to find everything from prawns, scallops, oysters, shellfish and fish, to sea cucumber, crab, and lobster. If you would like, abalone (top up $90) can be added too.

The final tier carries a large pot with a soup base of your choice — choose between the free Seafood Soup, or those with additional charges including the Kimchi (+$10), Army Stew (+$10) or Ginseng Soup (+$20). On the first tier, we had the prawns, which were definitely sweeter due to the fact that they are sourced live instead of chilled. As we peeled each prawn, we could feel the steam wafting up from the bottom tiers as the juices of the prawns seeped into the next tier. 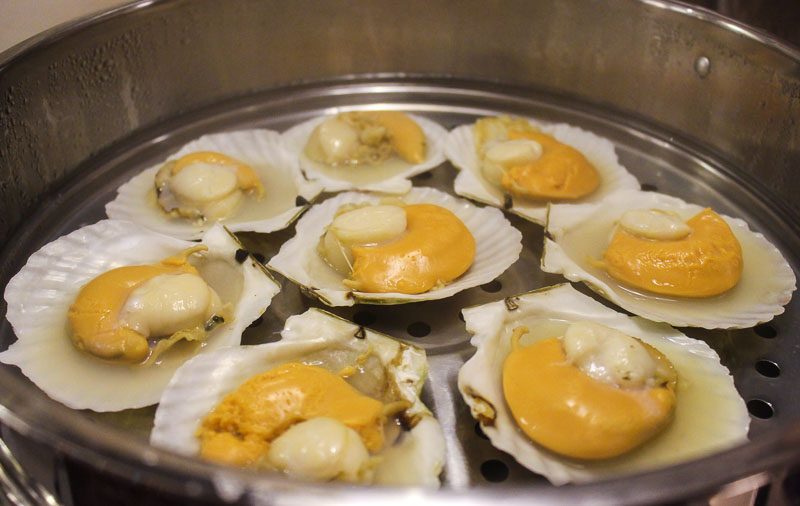 The second layer came with fresh scallops that were already soaked with the natural juices of the prawn. It was a great delight to slurp up the scallops from the shells. While the clams and mussels weren’t nearly as sweet, they were great when dipped in the soy sauce vinegar blend we got from the self-service station. Normally, I’m a sucker for raw oysters and am not very accustomed to steamed ones, but this was just as good, if not more. As with the scallops, the essence of the seafood trickled down into the steamer, making each oyster taste even more flavourful. Following that, we had two massive crabs, which were filled with lots of juicy meat. The soft and delicately sweet taste of the crab meat was everything we could ask for, really. 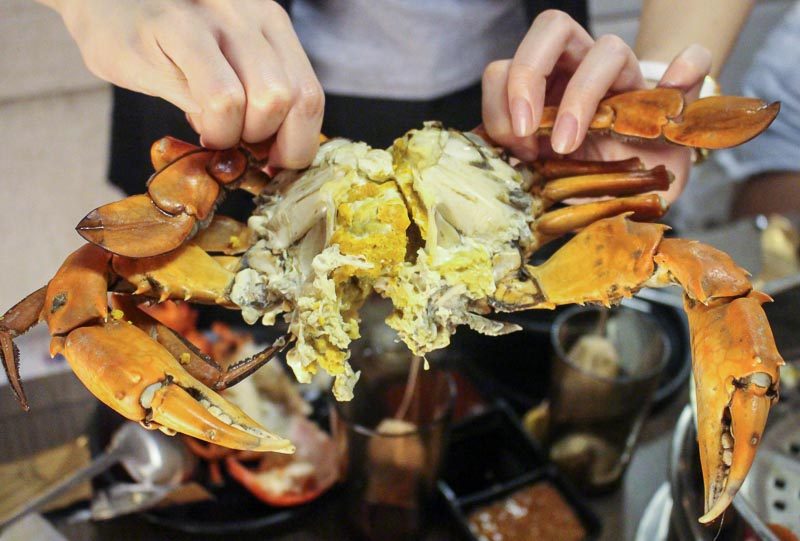 The crab we had boasted an extremely creamy roe within the shell. Having absorbed most of the juices, there was a sweet and briny tang to it that we thoroughly enjoyed. 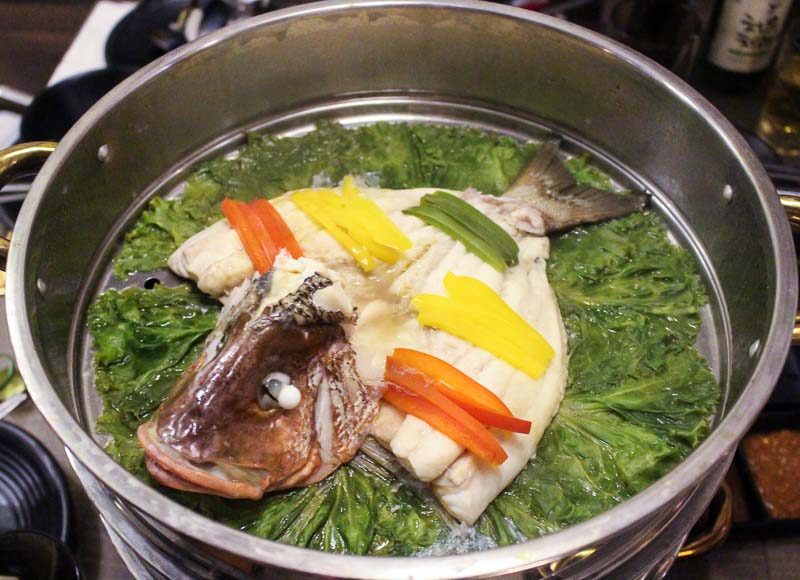 The mild taste of the Red Grouper fish served as a good palate cleanser from the strongly flavoured crustaceans. The texture of the flesh was also soft, allowing us to tear apart the fillet with ease. Lastly, we had the lobsters, which had a springy texture and were chewier than expected. Such is the quality of the freshness served here at K-Tower. The lobster flesh in the tail was nothing short of delicious and were fairly easy to peel off from the shell. 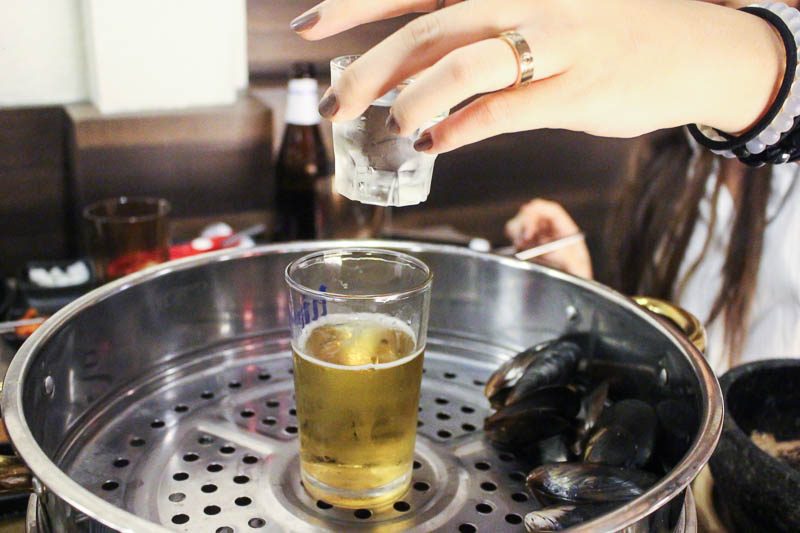 A popular way of drinking alcohol in Korea is of course, the Soju Bomb ($22 for Original Soju, $7 for Hite Beer), where we dropped a shot of Soju into a glass of beer.

What I liked about the Hite beer was that it was light and refreshing, unlike most beers that tend to have a bitter aftertaste. Combined with the Soju, this was truly a great combination.

Ensuring the authenticity of not only their all-day dining dishes and sides but the main steamboat tower, the food served here will definitely transform your dining experience into an unforgettable one.