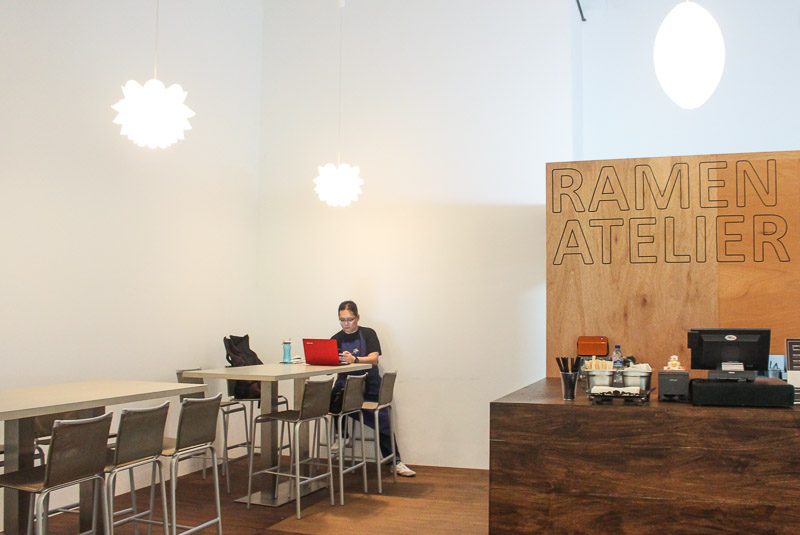 Introducing Ramen Atelier: a contemporary ramen pop-up store that utilises French culinary techniques in the creation of their ramen bowls. Located at SavourWorld, the ramen bar was opened recently during the mid-December period of 2016.

Having experience in French and Western cuisine, Chef-owner Andrew Ng has crafted an interesting trio for his menu including, Ramen Blanc with a shio base, Ramen Rogue with a tomato base, and lastly, Ramen Noir with a squid ink miso base. 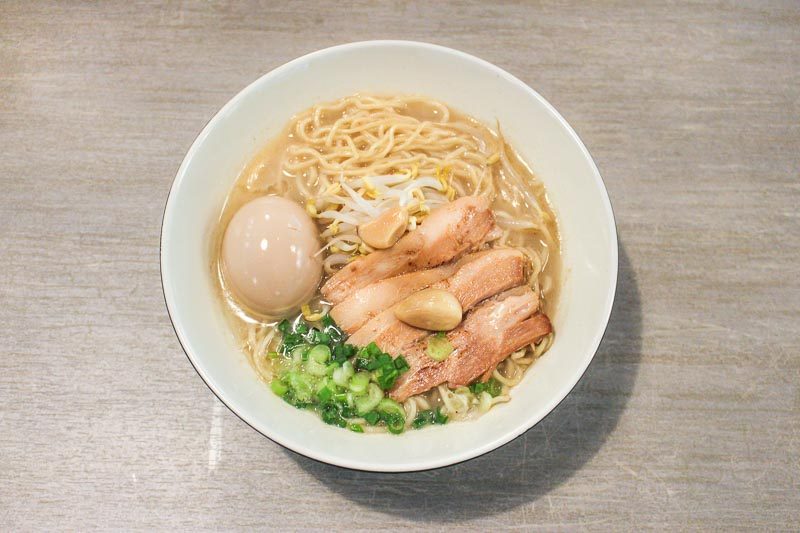 The Ramen Blanc ($13) is probably the most “traditional” ramen out of the three; this is crafted using the basic Tonkotsu broth, except with a lighter soup base from the combination of both pork and chicken bone.

Left to simmer for over 10 hours, the soup may not be purely made from pork, but it was still rich and flavourful, nonetheless. 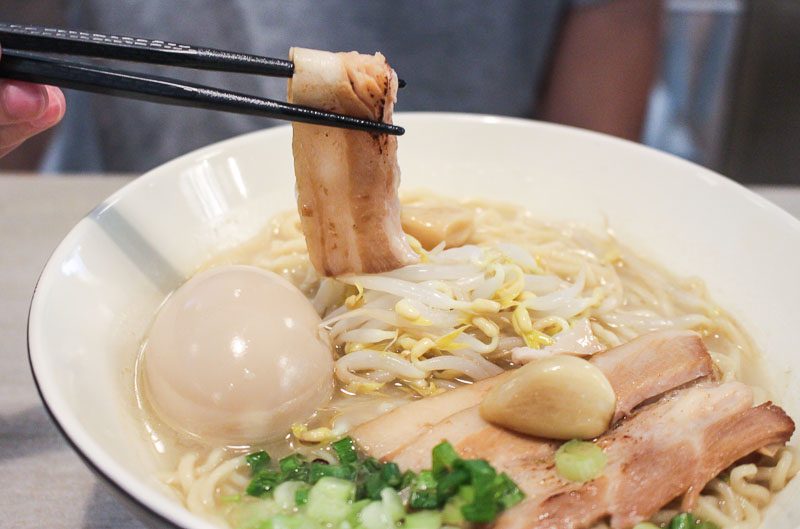 Cooked using the Sous-vide method, the chasu slices were evidently soft and tender. It also had just the right amount of fat to meat ratio, which I thoroughly appreciated. 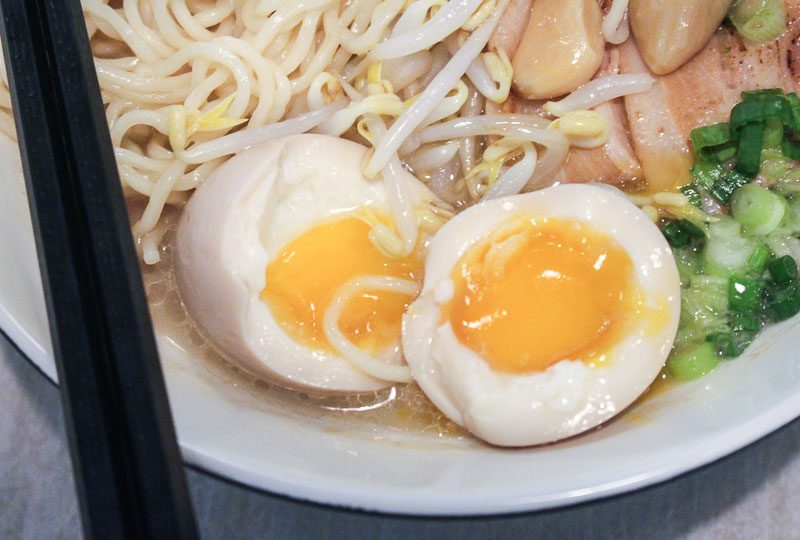 Of course, no ramen is complete without the ajitama egg. Marinated for a full 1-2 hour period, the flavour of the egg white itself was really nicely done. Upon splitting the egg apart, we also found a satisfyingly gooey egg yolk encased within. 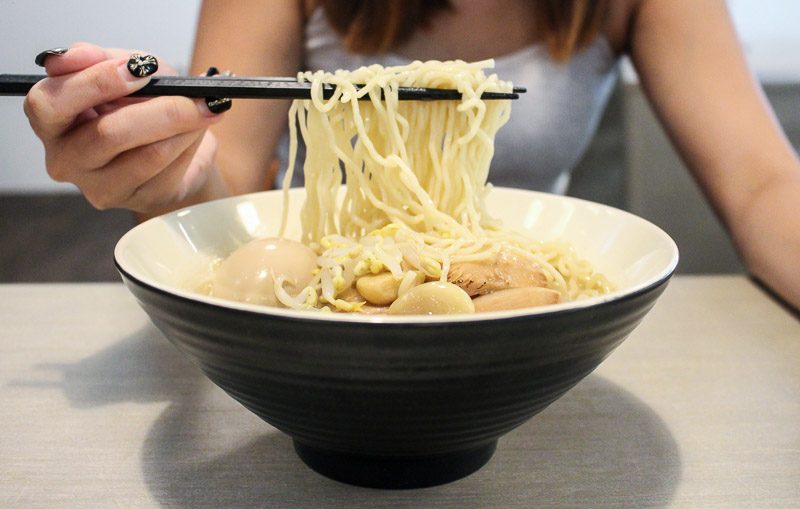 The ramen itself was cooked until al dente and had a springy texture. One thing we liked about the noodles was the fact that it didn’t go soggy when left to sit in the soup. Instead, it still remained firm to the bite whilst managing to absorb the flavours of the broth. Served in a spicy tomato base, the Ramen Rogue ($13) is reminiscent of the minestrone soup. Incorporating both tomato and butter in the broth, this was almost akin to having pasta, with all the added components of a great ramen bowl. While this may be written off as the spiciest of the three, don’t expect it to be super fiery because the spice is rather mild. Regardless, the lightly flavoured Tonkotsu broth paired with tomatoes and herbs proved to have a rich aftertaste that really appealed to us. Last but not least, we had Ramen Noir ($13). We’ve all tried squid ink pasta at some point, but squid ink ramen was definitely a first for us. 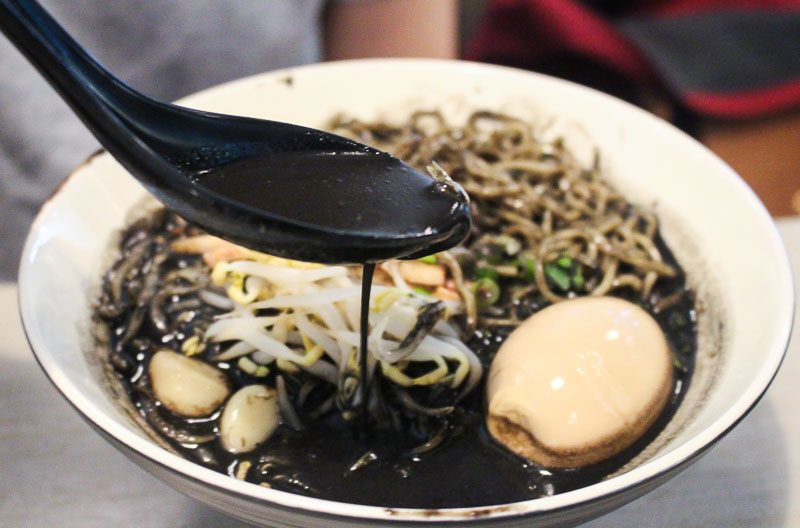 With the ramen doused in a thick squid ink miso base, this is definitely one for those who prefer something heavier on the palate. The subtle brininess of the broth went surprisingly well with the ramen, and we slurped most of it down without a fuss. Although there are only three ramen offerings on the menu as of now, Ramen Atelier will be looking at introducing new items very soon. Some of which include, a mushroom-based vegetarian ramen, as well as a dry ramen accompanied with spicy duck confit and a ponzu sauce.

With plans to transform the humble pop-up store into an actual ramen bar, we can certainly look forward to sampling more fusion offerings from Ramen Atelier in time to come. Just look out for the opening of their new outlet in March this year!