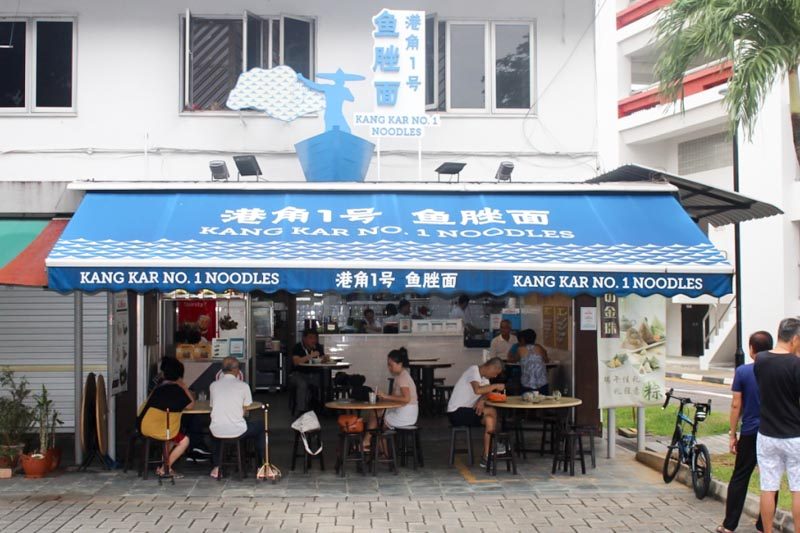 My go-to breakfast is always a hearty bowl of bak chor mee but as a self-proclaimed connoisseur, the challenge to find the ultimate bowl of goodness is no easy feat.

Tucked along the nook of Circuit Road, Kang Kar No. 1 Noodles puts an unconventional twist on the iconic Singaporean dish to bring you their own rendition of the classic breakfast bowl. 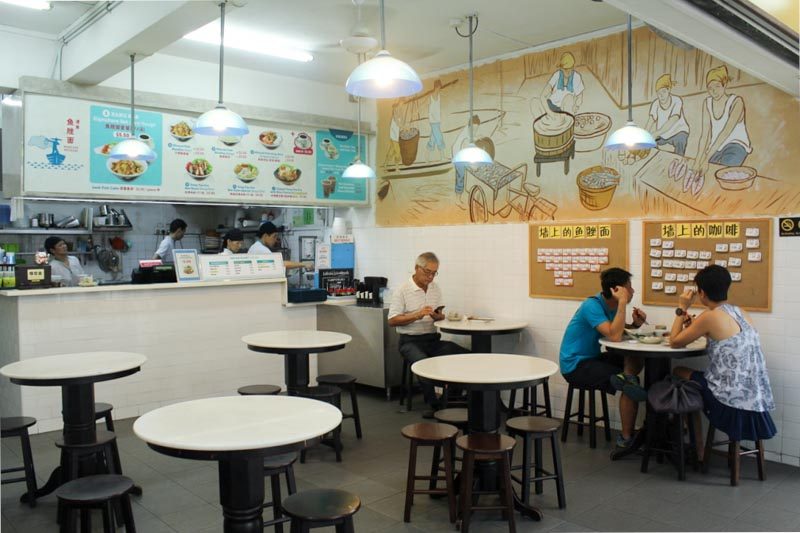 Guided by the familiar aroma of yong tau foo, walking into Kang Kar No. 1 Noodles takes you back to the olden days with their kampong wall murals and compact yet cosy interior.

The place was furnished with traditional round marble tables and dark wooden stools, which elevated the shop’s humble atmosphere.

Kang Kar No. 1 Noodles swaps the standard topping of minced pork with their signature minced fish, paired together with thin or flat egg noodles, otherwise known as yu mian or mee pok. Together with a beverage stand preparing some good ol’ kopi and teh, and a myriad of fresh yong tau foo, Kang Kar No. 1 Noodles is a three-in-one haven.

Branch manager Mr Kent Yap, recommended us his customers’ favourites for us to try, giving us a little taste of everything. The dry Minced Fish Noodles (S$2.50) is one that was introduced to the main menu due to popular demand. Topped with a generous amount of minced fish and scallions, the dish came with a bowl of soup and three fishballs.

While it did not differ much from the usual bak chor mee, what took me by surprise was the consistency of the minced fish. It strayed away from the tough texture of minced pork and melts in your mouth.

It took some time getting used to but after a few mouthfuls, I could see why people enjoyed this unique pairing. 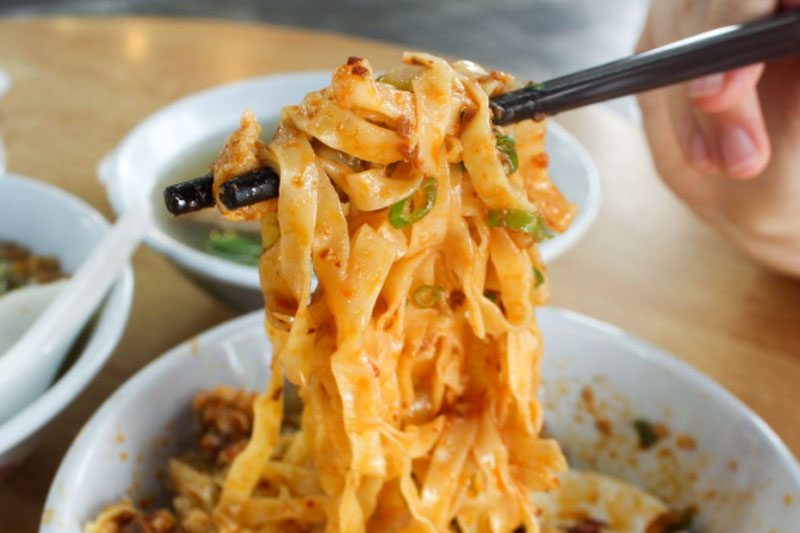 Nothing could really go wrong when we’re talking about egg noodles. What levelled up this dish was the sweetness of the chilli that coated every bit of the chewy noodles.

The heat was not too overpowering and managed to balance out that extra kick, which really brought out the essence of the bowl. 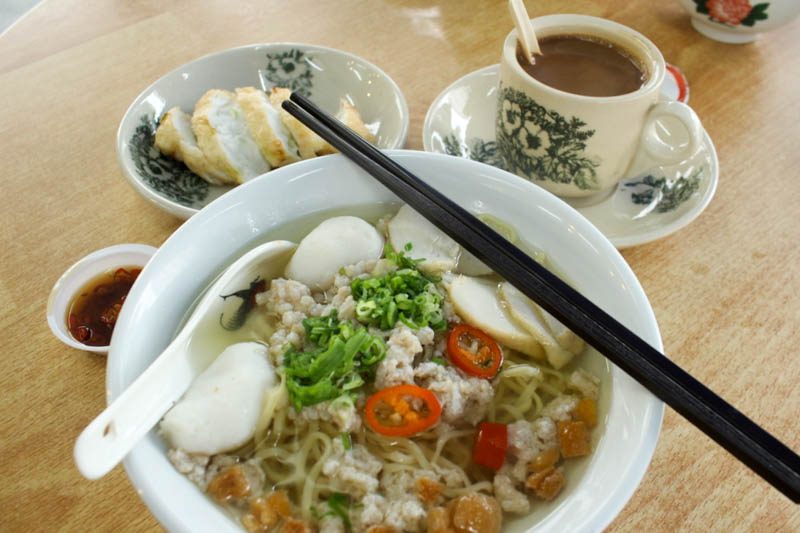 Another version would be the soup Minced Fish Noodles (S$2.50). You could also get it in a set at S$5.50, which comes with a side of homemade leek fish cake and a choice of beverage.

Inspired by Bedok 85’s Minced Meat Noodles, this bowl was the pioneer dish when Kang Kar No. 1 Noodles first opened in 2015. It was served to us with minced fish, fishcake slices, three fishballs and was garnished with thin slices of cut chilli.

The clear broth had sweet undertones that balanced well with the saltiness from the chunks of lard. I was impressed by how the lard remained so crispy, despite being soaked in the broth – but I’m sure many others have mastered this technique too. 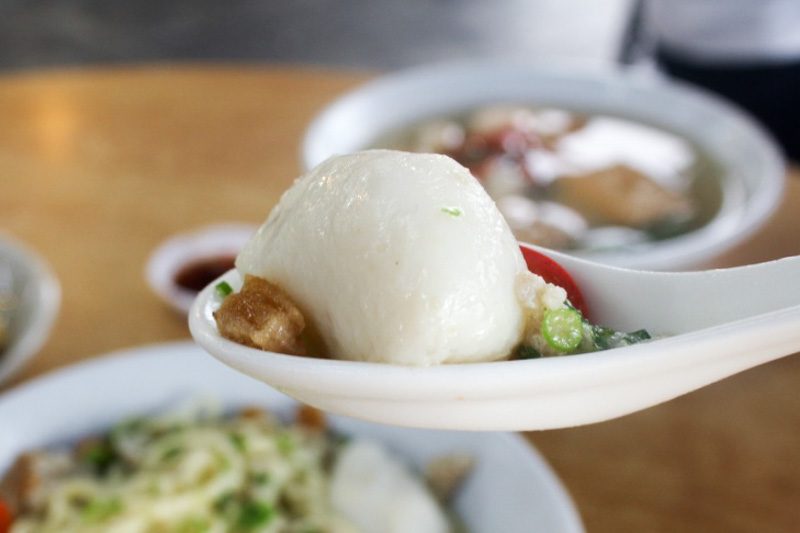 The DoDo fishballs enhanced the dish with more texture and flavour; it is juicy, robust and had just the right amount of saltiness too. I particularly liked how all the fishballs were not perfectly rounded, evidence that each ball was handmade. 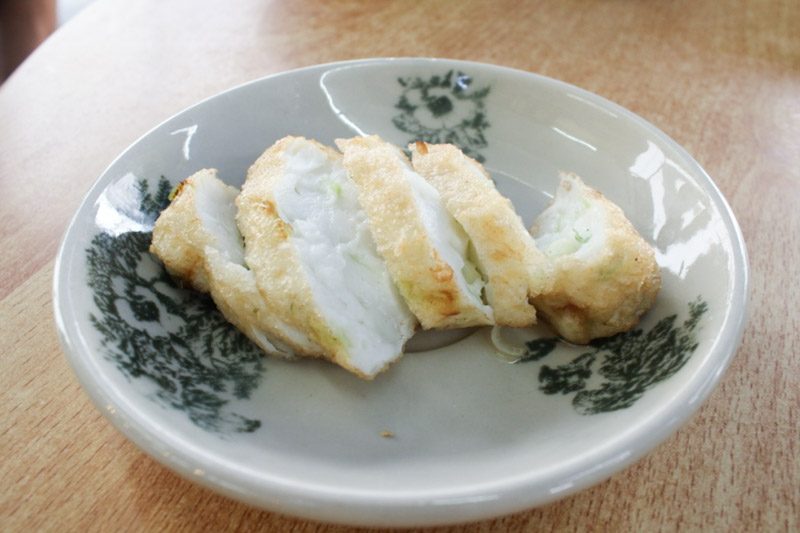 The Leek Fish Cake (S$1.50) at Kang Kar No. 1 Noodles was another peculiar item on the menu. Plated on traditional chinaware, the original taste of succulent fish cakes took a sharp turn with the introduction of crunchy leeks.

While I felt the leeks tampered with the authenticity of the fish cake, it was also unexpectedly refreshing to be greeted with a crunch in every bite. This might be a deal-breaker for those who aren’t a fan of messing around with tradition. 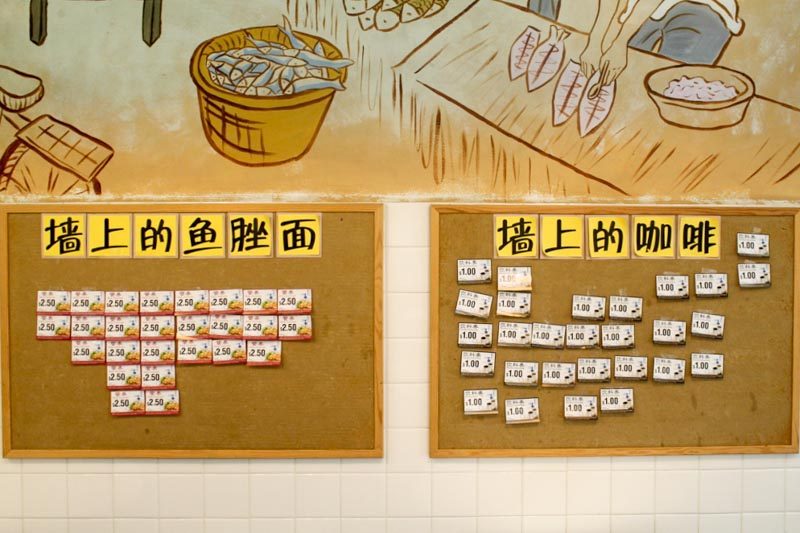 What sets Kang Kar No. 1 Noodles apart is their innovative pay-it-forward system. The idea was inspired by their boss after an overseas trip and was intrigued by how the scheme encouraged society to play their part and give back.

The noodle house soon adapted their own version in late 2017. Meal and drink coupons can be bought at S$2.50 and S$1.50 respectively and you can pin them on the boards for anyone to redeem. 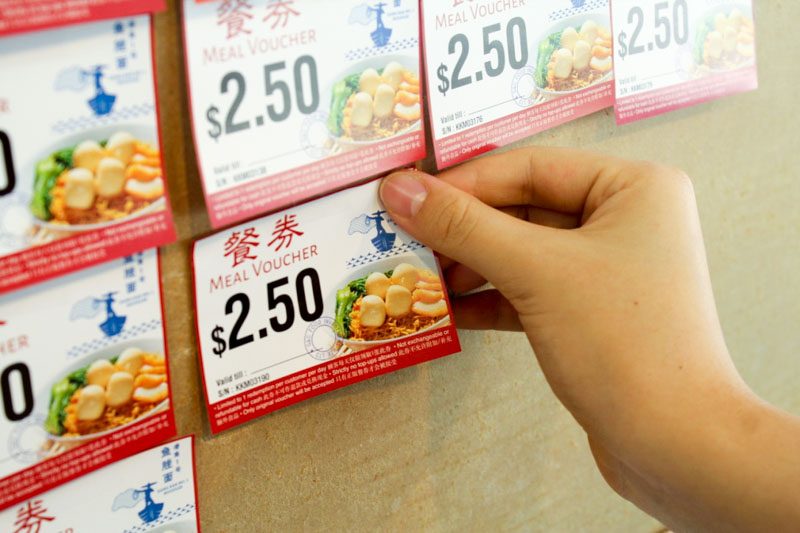 Such an initiative is a rare find in Singapore and we couldn’t pass on this opportunity. It was quite the experience ending the sumptuous meal with this thoughtful gesture!

Next time you’re at the crossroads of deciding what to eat, you could give Kang Kar No. 1 Noodles a try. While it’s not worth a special trip down, they’ve got you covered with their authentic Minced Fish Noodles, homemade yong tau foo, kopi and teh – all in one store.