Duck rice and duck porridge have always been my go-to for comfort food since it’s both affordable and scrumptious.

If you stay somewhere in the East, I am sure you will have heard about Kun Ji Duck Rice at Marine Parade Central Market & Food Centre. There are long queues during peak hours every day!

In hopes of adding another gem to my duck rice/porridge list, I traveled all the way from the West to the East to get a taste of Kun Ji Duck Rice. I couldn’t really decide between the braised or roasted duck rice, but based on the owner’s recommendation, I went for the Braised Duck Rice (S$3.50). After all, it’s the stall’s signature dish.

I also ordered the Braised Duck Porridge (S$3.50) to try. To accompany the two dishes, I also added on two plates of roasted meats (S$4) and braised side dishes (S$3.50, price varies with sides chosen). 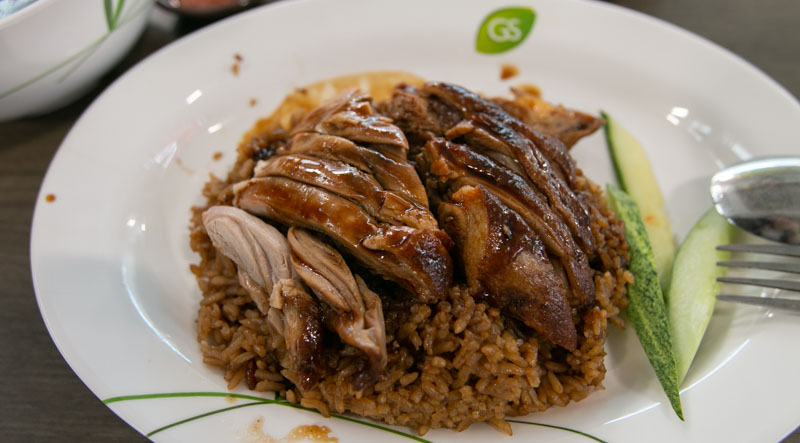 Even though I wanted to take a bite of all the dishes all at once, I held myself back.

I started with the Braised Duck Rice (S$3.50) first, which came with sambal on the side.

Kun Ji gave a pretty generous portion of rice, and the dish also had plenty of duck meat drizzled with braised sauce all over. There was a good mixture of thicker and thinner slices of duck meat, all with skin, and each piece was tender and flavourful with a good amount of fat. 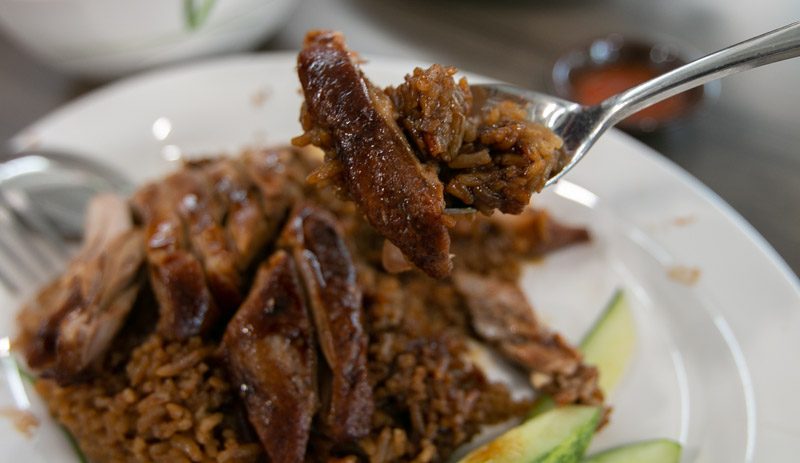 The rice had a nice soft but still textured consistency, and after being coated with the braised sauce became more flavourful.

Take a spoonful of the rice and some duck meat with a dash of sambal — that’s the best way to savour all the flavours and textures at once!

Overall, I found this to be an affordable and satisfying plate of duck rice. If I’m ever back in the Marine Parade area, I’d like to go back for a second plate. 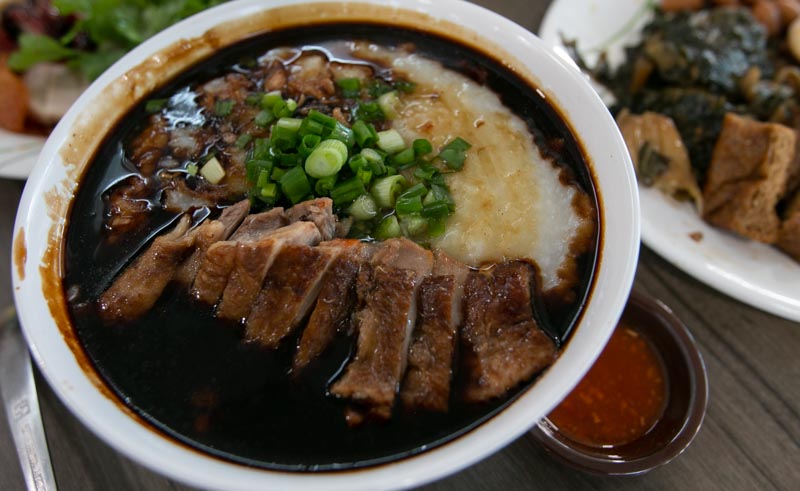 Next up was the Braised Duck Porridge (S$3.50), which I was most eager to try.

The first thing I noticed was that the bowl was filled to the brim, and was absolutely drenched with braised sauce. I enjoy my duck porridge drowned in lots of sauce, so this bowl was perfect for me.

Once again, the dish came with a generous portion of duck slices, which I appreciated. Mixing the porridge with the braised sauce created a bowl of delicious goodness that was rich in flavour without being too salty and had a hint of sweetness. Each comforting spoonful made me feel like I was being wrapped in a warm blanket.

The duck which was tender, paired well with the smooth consistency of the porridge.

This was definitely a generous and comforting bowl of duck porridge, and the best part is that it is only S$3.50. 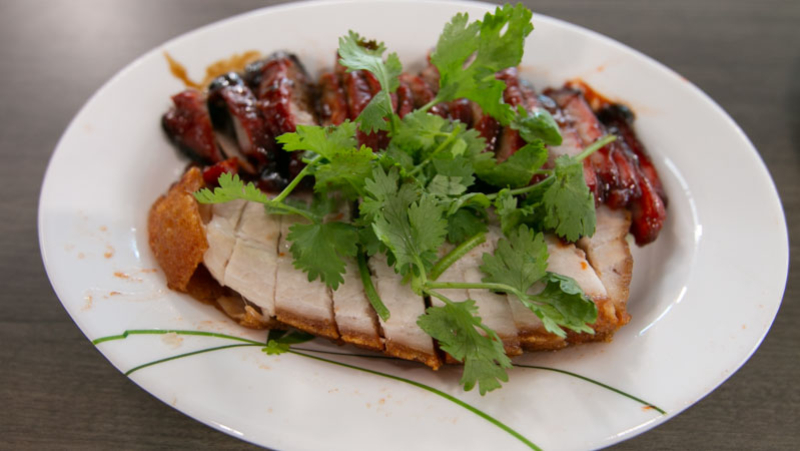 Of course, we ordered a plate of roasted assorted meats to pair with our meal. There was a line-up of roasted char siew and pork (S$4), which came in pretty generous slices. 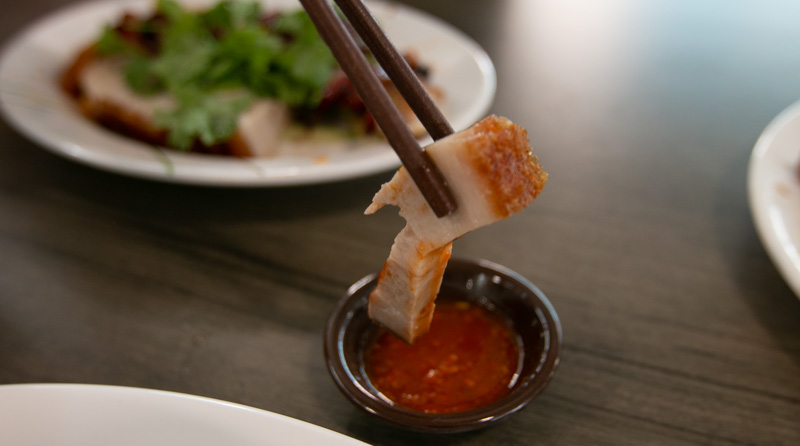 Picking up a piece of pork, I noticed that they used a leaner cut of meat, which means there was less fat compared to the usual sio bak. I didn’t mind that the pork was less fatty because that meant there was more meat for me to enjoy.

Because the meat was leaner, it had a tougher texture, but was still easy to chew. I was also glad that the skin was crispy and not soggy.

To give your pork a little spicy kick, enjoy it with some chilli. Their garlic chilli was on the sweeter side though, which helped to mellow out the spice. 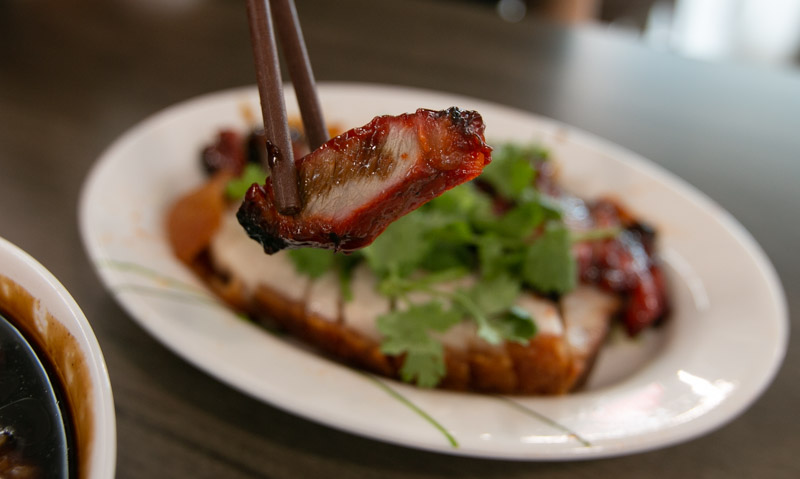 The char siew was also on the leaner side with slightly charred ends, which added some smoky flavour.

However, I found the meat to be too tough for my liking. I would’ve preferred the char siew to break apart more easily, like most other char siew slices I have tried. One does not simply patronise a duck rice stall without getting a plate of braised side dishes (S$3.50 in total),so I ordered some tau kua (tofu), tau pok (tofu skin), braised eggs, salted vegetables and peanuts.

There is not much to say about these side ingredients, except that they made a good addition to the duck porridge and duck rice. I especially enjoyed getting a mouthful of peanuts, salted vegetables and tau kua with my porridge.

Priced quite affordably at S$0.50 per dish as an add-on, you can also get the salted vegetables and peanuts for S$1 as an a la carte dish.

My trip to the East was not in vain, and I liked that the dishes were generous in portion, tasty yet affordable. I would definitely add Kun Ji Duck Rice to my list of go-to duck rice/porridge places.

Craving some comfort food that doesn’t cost much? Head down to Kun Ji Duck Rice if you’re in the East!