Homegrown artisanal ice cream parlour, Leeu SG, has popped up at the Esplanade, and no other dessert series screams “uniquely Singapore” than theirs do. Founded by husband-and-wife team Jenn and Valerie, this cute little store brings us treats that encapsulates the flavours of our sunny island, with “each bite really hitting home for all Singaporeans”, as co-founder Valerie herself puts it. 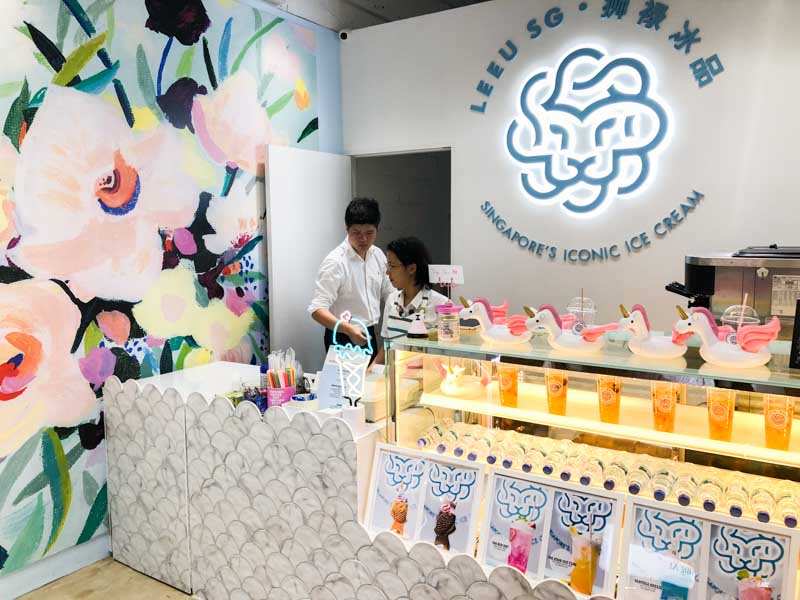 For those curious, Leeu actually means “lion” in Afrikaans, and the name came about when the couple took a trip to South Africa in 2017, during which they were awestruck by the majestic lions roaming around the Krugger National Park. 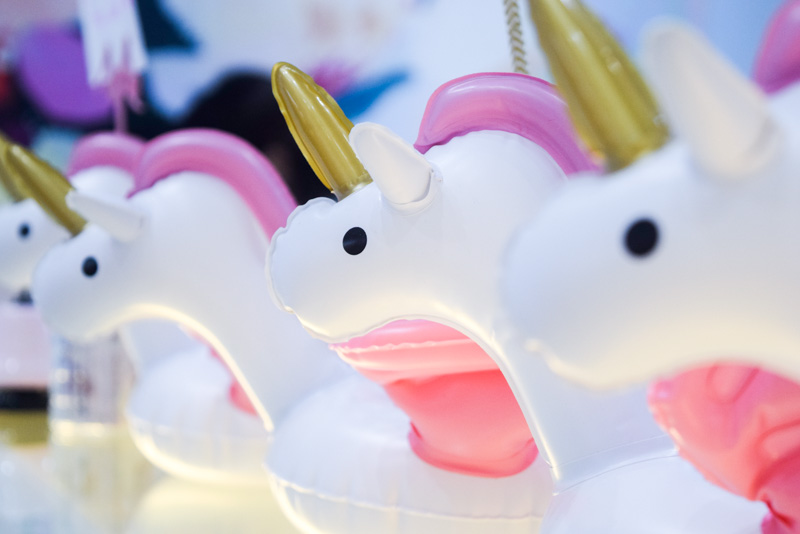 The fantasy theme runs aplenty throughout the store as you can see from their obsession with fictional beings like the unicorn and Merlion. 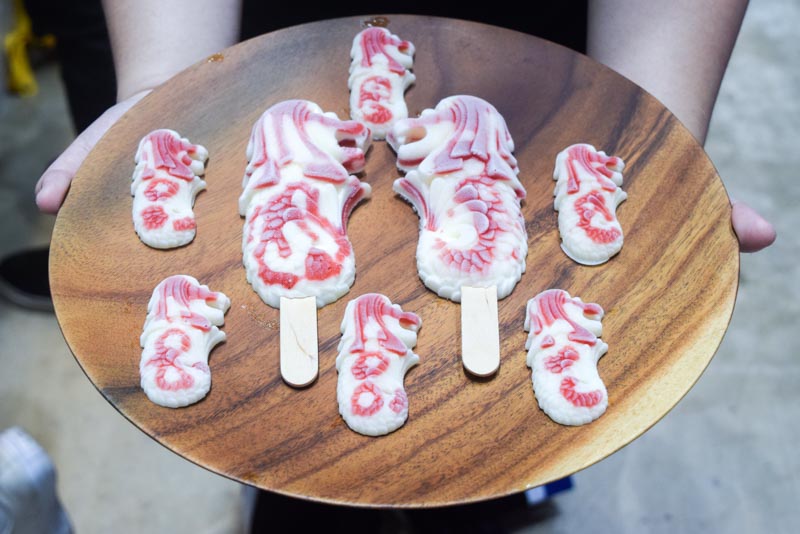 We kicked off the session with their signature Icy Merlion ($4.80), dressed patriotically in the nation’s colours too. The larger popsicle is what will be served, while the smaller ones are just tasting portions.

How cute would a baby Merlion popsicle be though? They should seriously consider selling these in a family. Boasting strawberry and milk flavours, the popsicle reminded me of when I would indulgently snack on a Strawberry and Cream Chupa Chups or two behind my mother’s back (oops, sorry mum).

Also, I really loved that the strawberry had just the right amount of acidity, helping to balance out the sweetness of the whole snack.

I’m almost certain your popsicle will be disappearing as fast as mine did. Another offering from Leeu that captures attention every time is The “Esplanade” ($11.80), that was inspired by the very building that houses the ice cream palour, and looks exactly the part too! 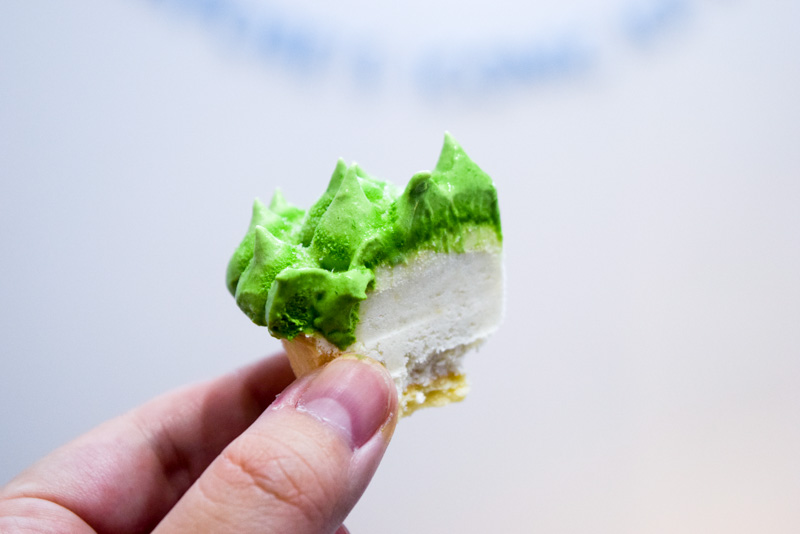 $11.80 might sound hefty at first, but you get durian all the way through the tart. Even as someone who doesn’t like the fruit, I was quickly won over by the thick, rich and authentic durian flavours that spread across my palate the moment the piece hit my tongue.

I have to say that this was easily one of my favourites from Leeu. Jenn explained that the piping and filling are both made from D24 durians that come straight from his durian farm, and he substitutes them with Mao Shan Wang when they’re in season. The all-time favourite Japanese dessert, Taiyaki, is available at Leeu too and what you see being made here is The Fish Tail ($6.80). 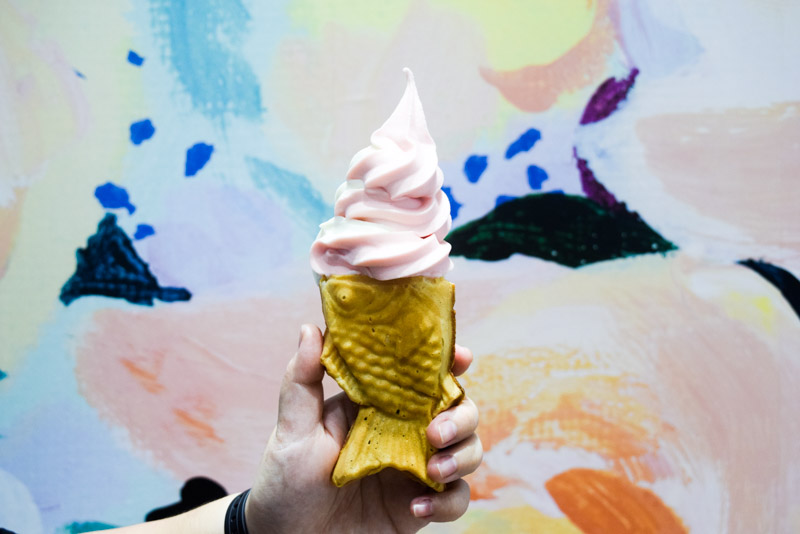 The Taiyaki kinda felt like the soft serve version of the Icy Merlion from before, except creamier. Cold, creamy ice cream atop a warm, soft pancake sure is comforting to me.

That said, the ice cream naturally melts really quickly, so act fast on this one! (we planned this shot five seconds ahead in order to photograph the ice cream perfectly.)

The only gripe that I had with it was the azuki beans at the bottom that tasted too earthy for my liking. But that’s just me though, their azuki beans are supposedly flown straight from Japan, so that’s got to count for something right? 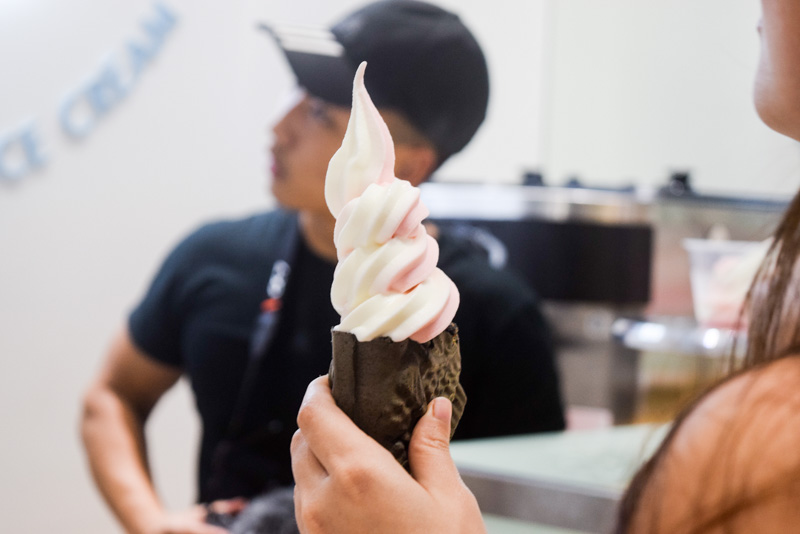 The fish-shaped dessert also comes in a charcoal waffle, for those that are looking for a slightly more roasted fragrance. 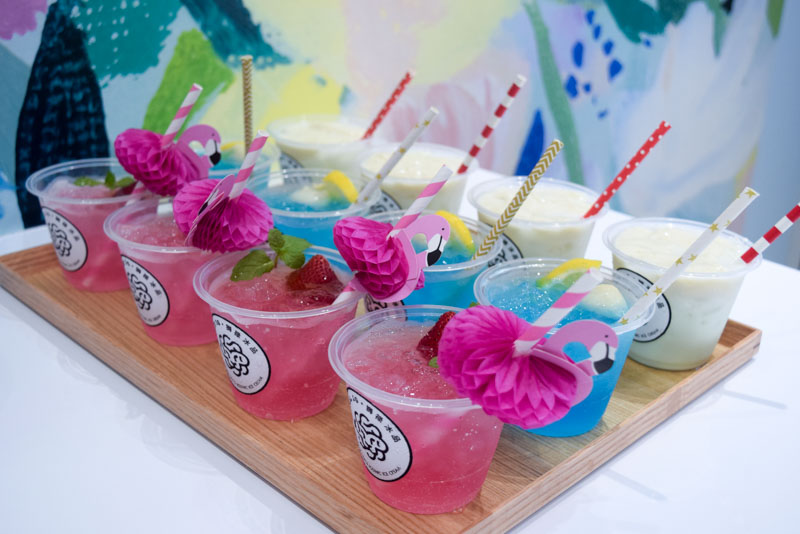 Jenn’s generosity didn’t stop there, we were pleasantly surprised with a tray of their Soda Ice Cream Floats ($6.80 each), but take note that these are again merely tasting portions. 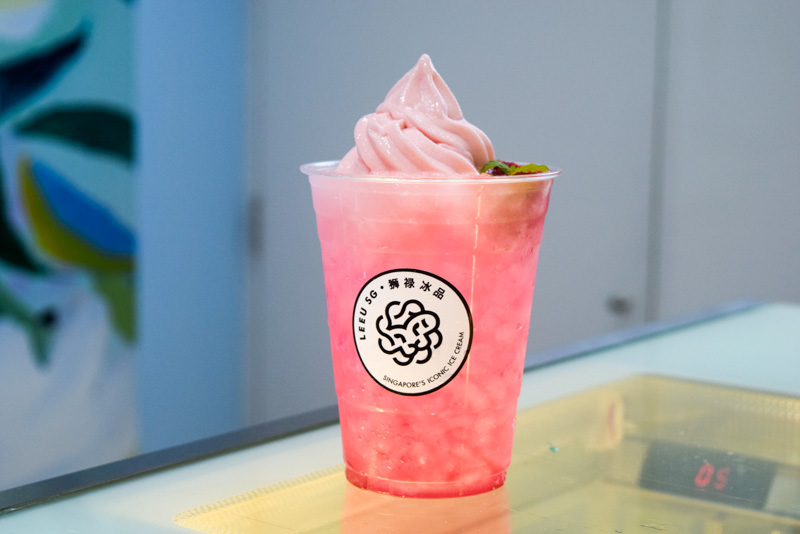 The real deal is served as such, and here we have The Red Dot ($6.80). The berry peach soda was almost medicinal to me, so needless to say I wasn’t really a fan. On the bright side, the strawberry soft serve didn’t fail me though. 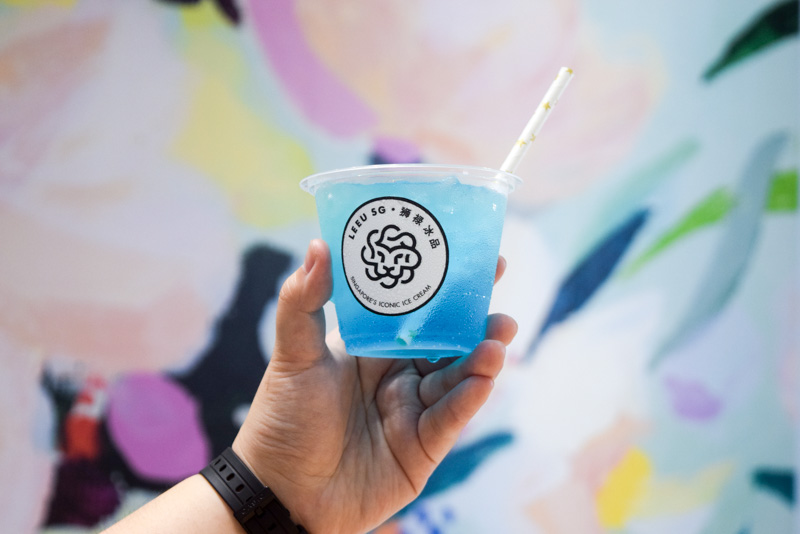 This really reminded me of those Blue Lagoon drinks that you can get at old school bubble tea places. The deep blue hue also emulated clear sea waters, which I guess is why it’s called The Sentosa Breeze ($6.80). Inside it, we found a wedge of lemon and some lychee, making it altogether a really refreshing combination.

Why so blue? You may ask. We heard that it’s from the health food, Blue Majik powder, which is a variant of Spirulina. So toss your worries of artificial food colouring aside and happily indulge.

If carbonated drinks aren’t really your jam, Leeu has also included The Old Timer ($6.80) on their menu. That “weird tau huey” drink is actually an amalgamation of pandan milk and beancurd, and while it may seem strange at first, I guarantee you that it’s nothing short of yummy.

When I told Jenn that this was my favourite beverage out of all, he jokingly responded with, “Oh, I know already you’re the old-fashioned type”. Guilty as charged. If you’re feeling fancy, you also have the option of topping up an additional $3 to carry your drink around in a Unicorn Float. Sounds gimmicky, but it’s the kind of gimmick that I’d happily buy into. (Okay, you can call me weak now.) 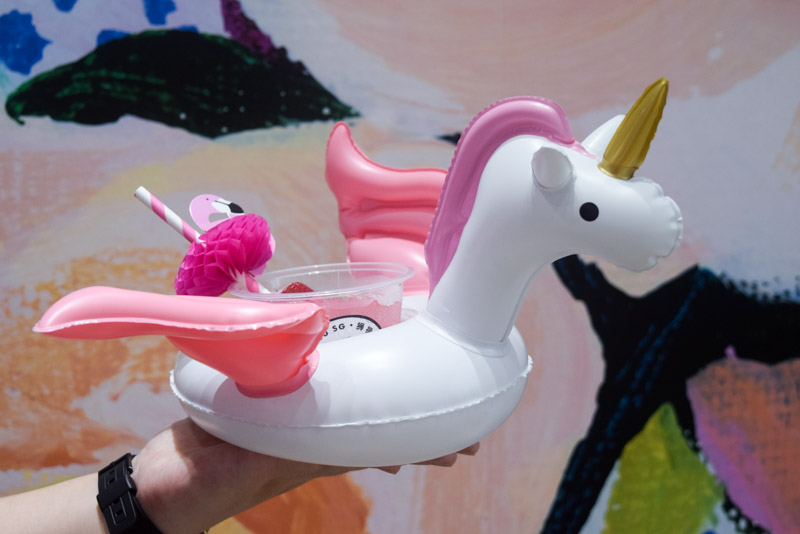 Feeling even fancier? Get the unicorn with wings instead. 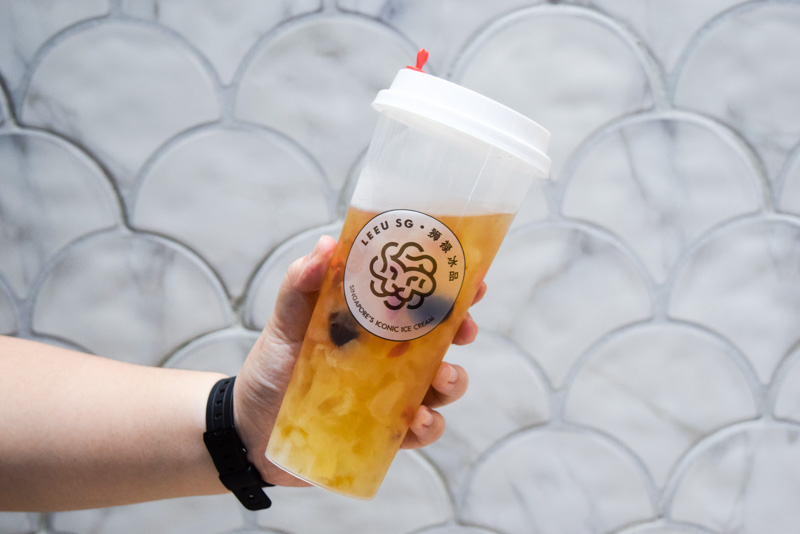 What seemingly looks like Cheng Tng in a cup is actually The Collagen Boost ($6.80), that has yet to be placed on the menu but is already up for grabs. If you’re unconvinced, here are just some out of the many collagen bits that you can find bobbing around the cup. Jenn swears that if you drink this every day, your complexion will thank you for it later. 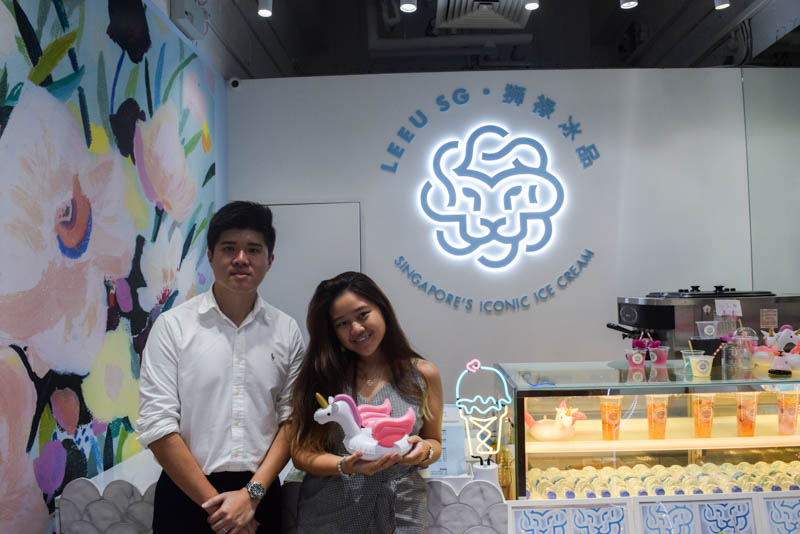 Here are me and Jenn with my newly-acquired unicorn float. We bade farewell to each other and with that, my visit to Leeu SG concluded.

I’m not one to have a sweet tooth, but some of Leeu’s treats really offered me much to crave for. My favourites would have to be The “Esplanade” and The Old Timer, let me know yours when you’ve stopped by for a taste?