Level Up: This Bar In Clarke Quay Is An Arcade For Adults Filled With Food, Games & Booze

I remember the times when I hung out with friends at the nearest Timezone after school. I spent so many hours and a lot of pocket money there, trying to shoot some zombies and crash some cars – it was always a fun time. 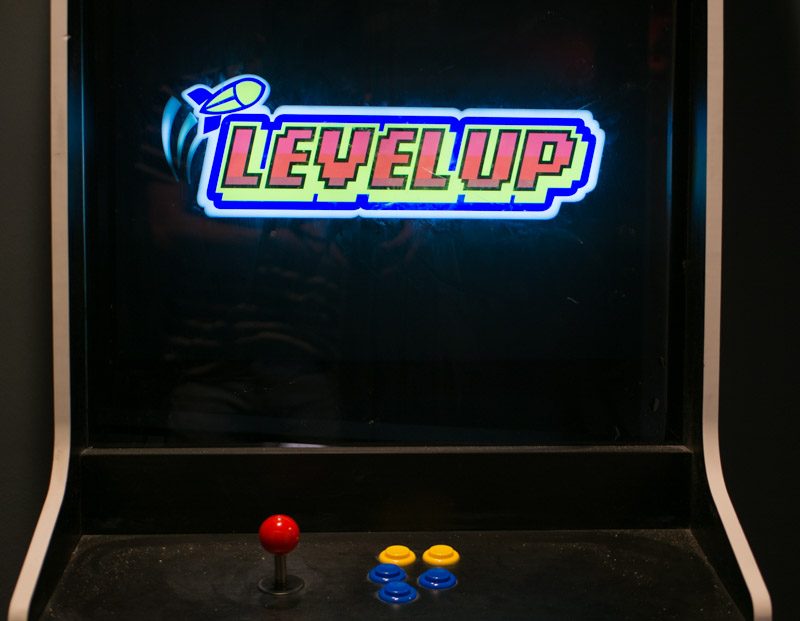 Now that I’m older, perhaps you could say that I shouldn’t be hanging out at arcades anymore. But, what if it’s an arcade with booze? Housed in a prime location in Clarke Quay, Level Up is a retro, arcade-themed bar. The walls are plastered with iconic video game characters like Mario and Pac-Man, and the overall interior design is very reminiscent of the old comic and video game style. 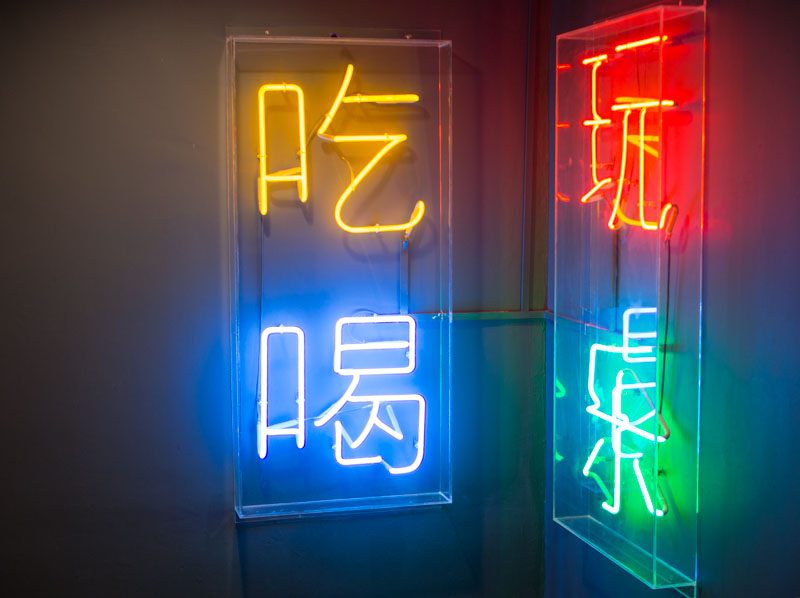 As you arrive at the doorstep of the bar, you’ll instantly get a feel of the vibe; the entrance has a neon sign that says, “Eat, Drink, Play” in Mandarin. It’s a great spot for an Instagram picture. 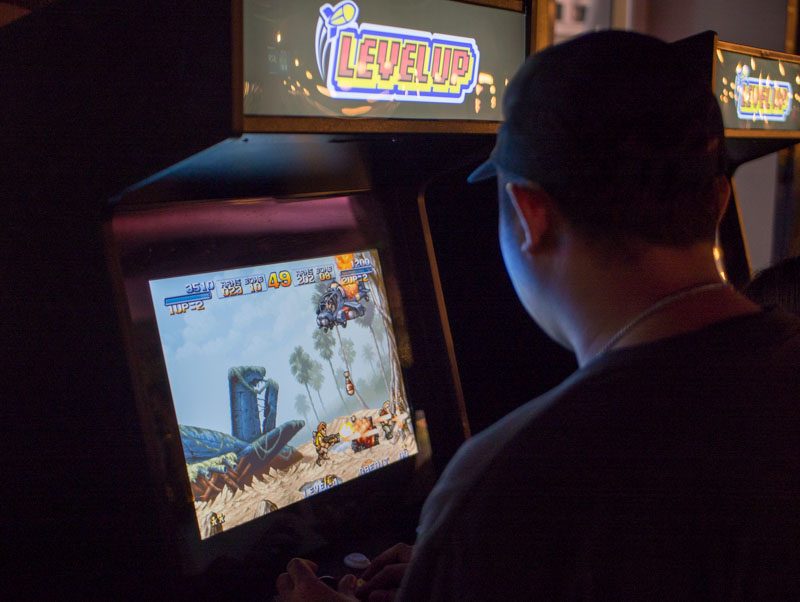 Step into the bar, and you’ll already see a Metal Slug game machine – a perfect shoot-‘em-up game to get your night started. Or, start mashing those buttons with a game of Street Fighter if you feel like kicking some ass.

There’s also a claw machine for you to try your luck at winning a plushie. Venture deeper inside though, as that’s where all the fun is. 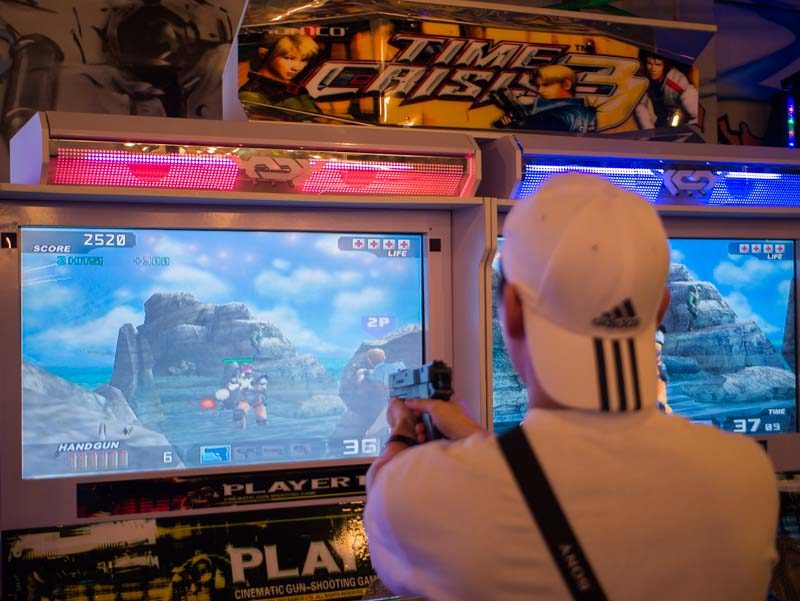 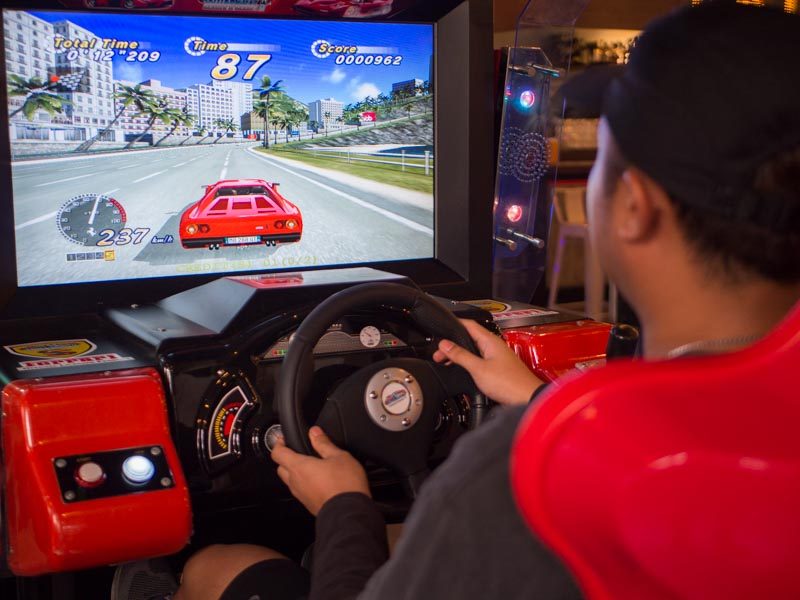 There’s an exciting selection of games to play: shoot bad guys in Time Crisis, hop on a Ferrari in Outrun, or challenge your friends to a game of air hockey and foosball. There are also hoops and darts machines if you want to test your dexterity.

This section of the bar really brought out the 14-year-old boy in me, and I loved it! When you purchase food and drinks, the game tokens will be given to you. You’ll need those coins to play the games. Alternatively, you can buy tokens at $2 for two, $5 for six, and $10 for 15. 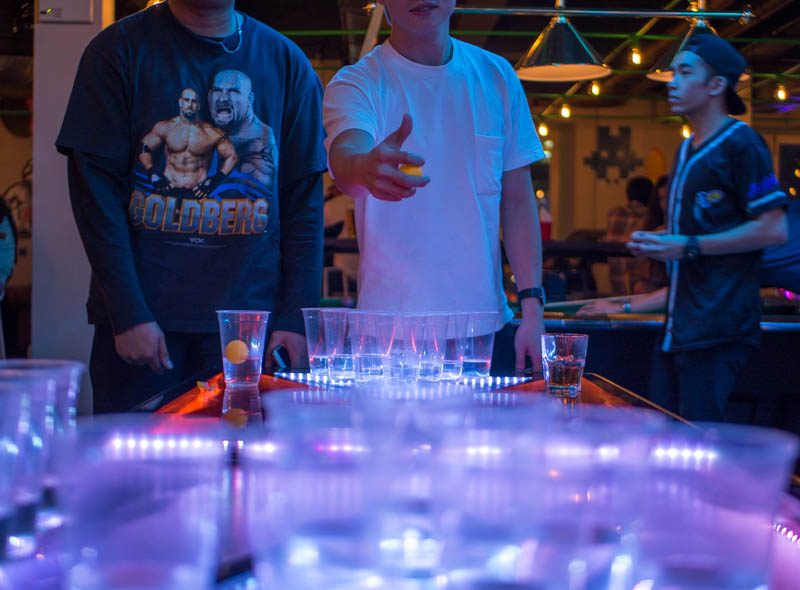 You’ll never run out of things to play at Level Up, but if you want to stick with the usual bar games, you can. The bar has light-up beer pong tables, as well as a pool table. There’s truly something for everyone here. 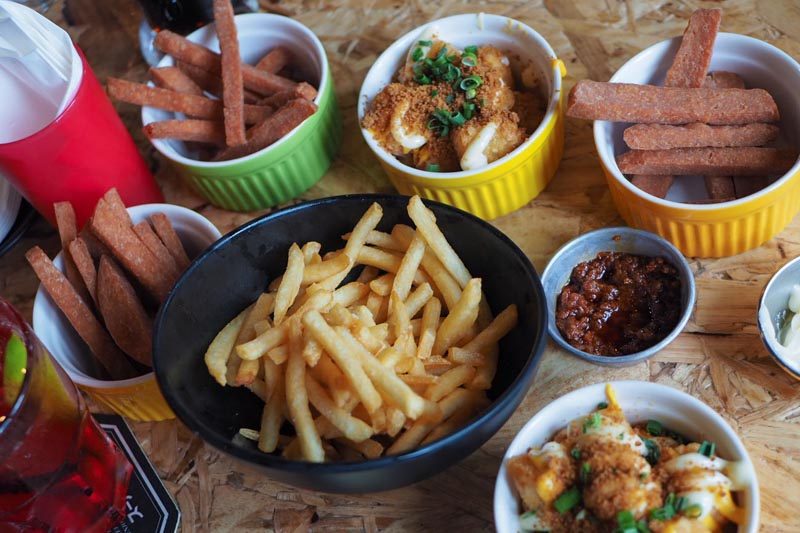 With all that playing around, your stomach is sure to start growling. Level Up provides a really delectable selection of food and drinks especially for such situations. 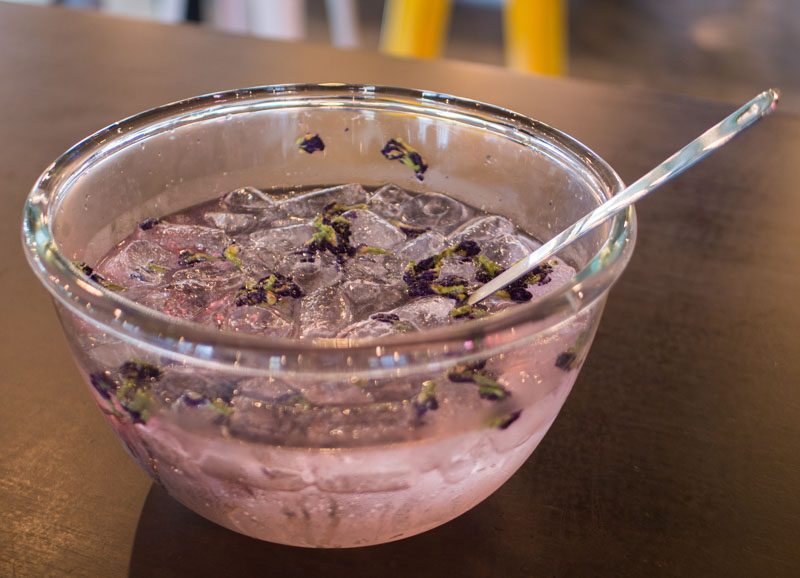 If you’re partying with a bunch of friends, consider getting a party punch bowl. We got the Botanical Paradise bowl ($108), which was a mix of chardonnay and 7-Up, sprinkled with beautiful flowers on top to add a little flavour and aroma.

The Botanical Paradise didn’t seem too heavy on the alcohol, and was in fact quite pleasing to drink. So if you don’t really fancy the taste of alcohol, this mix is perfect. We also got the Melon Cucumber Tini ($16) and an Appletini ($16). The Appletini was not too sweet, and is a great drink for just chilling out. Girls, this is the drink to sip on while you chat and wait for the boys to finish with Street Fighter.

The Melon Cucumber Tini however, was a little too sweet for my liking. It was like drinking syrup straight out of the cup. Maybe the bartender made a mistake with my order, but alas, it was really too sweet. A more interesting drink to try would be the Milo Dino ($16), which is your standard Milo Dinosaur, but mixed with vodka and a cherry on top.

It was a really fun drink to have, as I tried to eat the Milo powder while gulping down the alcohol. It’s kind of the perfect mix of childhood nostalgia and adulthood. 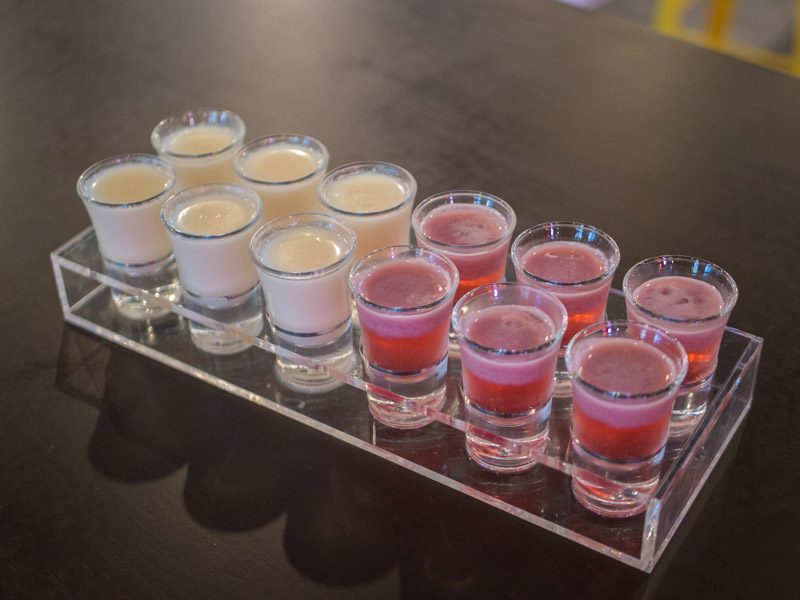 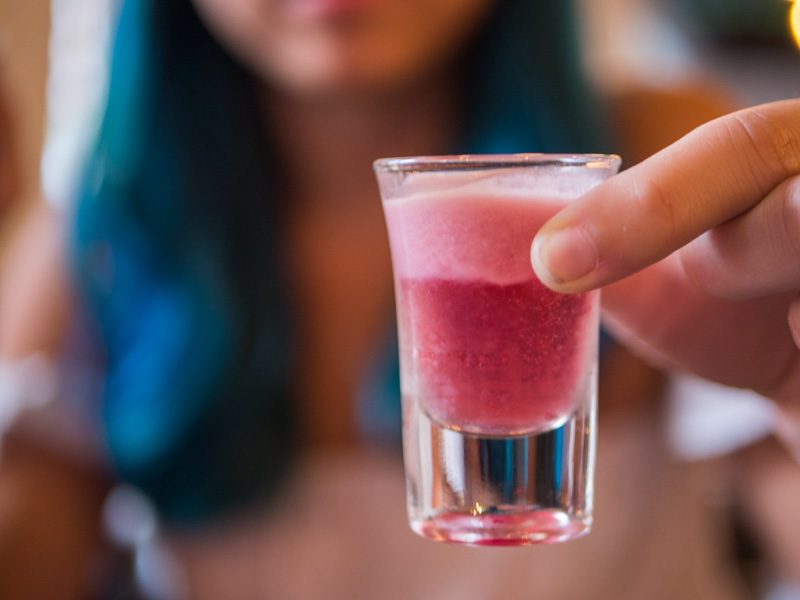 Prefer taking shots? My friends and I definitely do, and so we tried the Yakult and Peanut Butter shots ($48 for six, $88 for 12) and they were amazing.

Personally, I love Yakult, so maybe that’s why it appealed to me so much. The shots had a subtly sweet taste, but not too much that you’d forget that you were drinking alcohol. 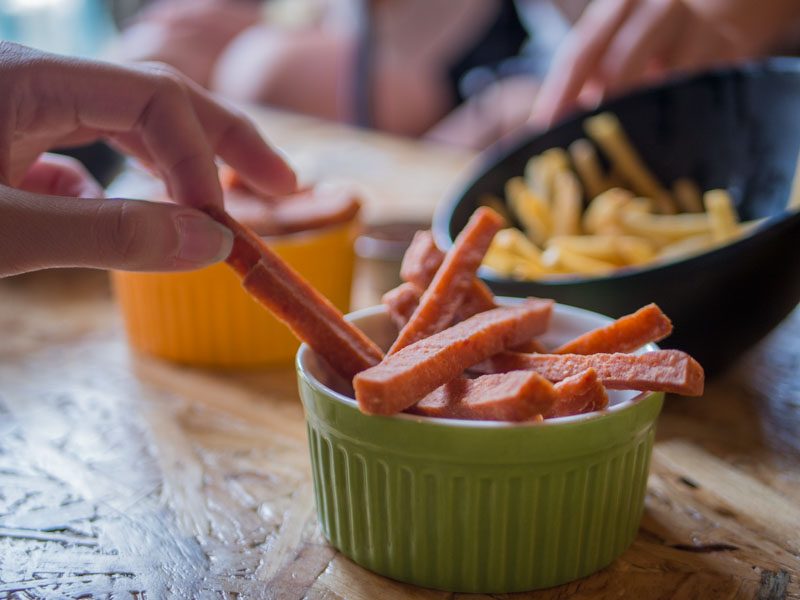 As we all know, it’s not a good idea to drink on an empty stomach. You can choose from all the standard local bar bites, like Luncheon Meat Chips ($10) and Salt And Pepper Fries ($10). 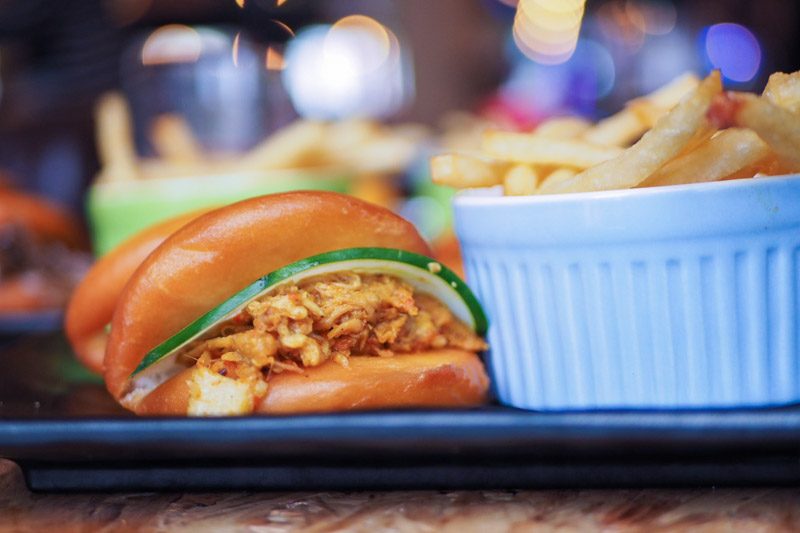 The Spicy Pulled Pork Slider ($15) and Beef & Mustard Slider ($15) were fantastic as well. The buns were nicely toasted and the thinly sliced meat was well-seasoned.

The Beef & Mustard Slider came with caramelised onions wedged in between the buns as well, complementing the flavour of the beef. 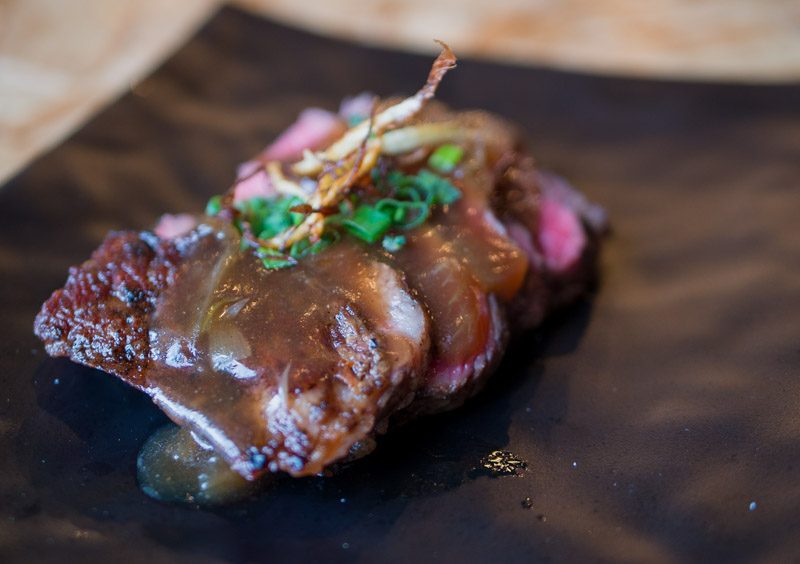 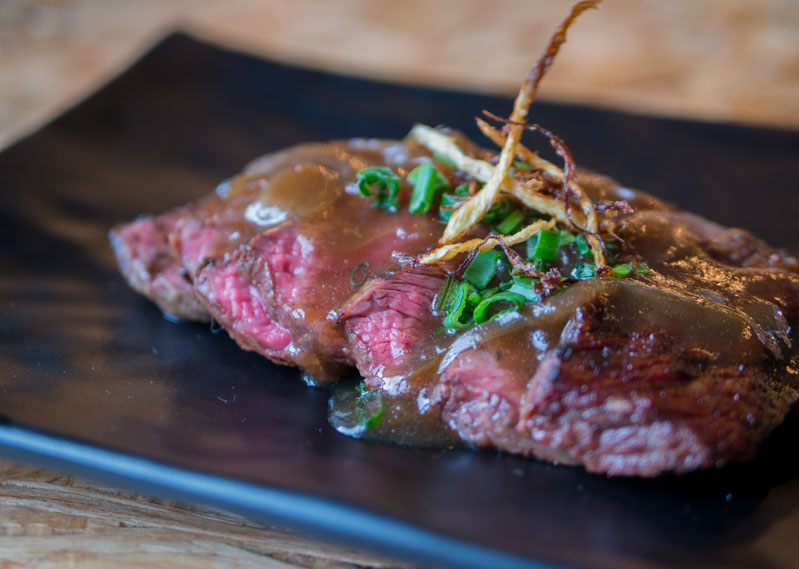 My absolute favourite dish though, was the Short Ribs ($25). The beef was wonderfully cooked to a medium rare, making it slightly chewy but not to a point where it would get stuck in your teeth.

If you love a good steak, you have to try this, and make sure you get a few spring onions in each bite! 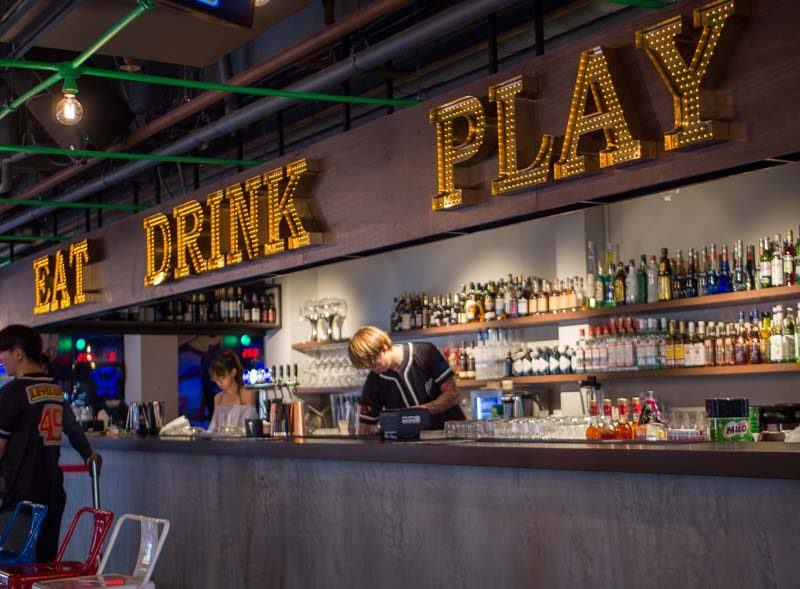 With games, drinks and food all covered at Level Up, you’ll never have to wander Clarke Quay aimlessly anymore, wondering which bar to go to. It’s a fairly new establishment, but huge crowds are already drawn to it, proving its popularity.

If you’re thinking of heading down, I’d say it’s best to make reservations in order to avoid disappointment; that’s the last thing you need on a Friday night out. Once inside, just get lit, get drunk, and have some fun just like in the good ol’ days!

Previous articleEat Your Way To Snack Heaven At The World Snack Fair 2018 From 19 – 21 Jan At Suntec
Next articleKindred Folk: Let’s All Scream For Asian-Inspired Ice Cream At This New Cafe At King Albert Park