Thinking of how to take your annual Chinese New Year reunion dinners up a notch? Try Madame Fan, a Chinese fine-dining restaurant that prides itself on its eclectic theatre-dining experience.

Located at The NCO Club, this restaurant-lounge bar is the brainchild of famed London-based restauranteur, Alan Yau, whose ingenious creations include Michelin-starred Chinese fine-dining restaurant Hakkasan, as well as the popular casual Asian restaurant chain Wagamama in the U.K. 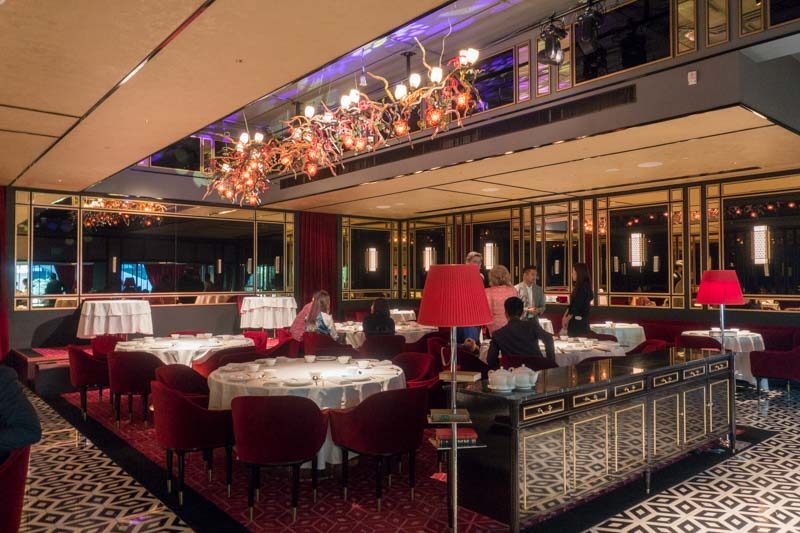 Decked out in lush carpets, red velvet chairs, sleek mirrors and exquisite ornaments, stepping into the 222-seater Madame Fan feels like you’re being transported back to Shanghai’s post-war era. I half expected ladies in elaborate cheongsams and feather headdresses to come waltzing down the aisle, like something out of Crazy Rich Asians.

Sitting at the bigger tables might be a slight squeeze as the red velvet chairs and tables are slightly smaller than the ones in a regular Chinese restaurant, but this cosiness is deliberate as it’s meant to make your dinner an intimate one. 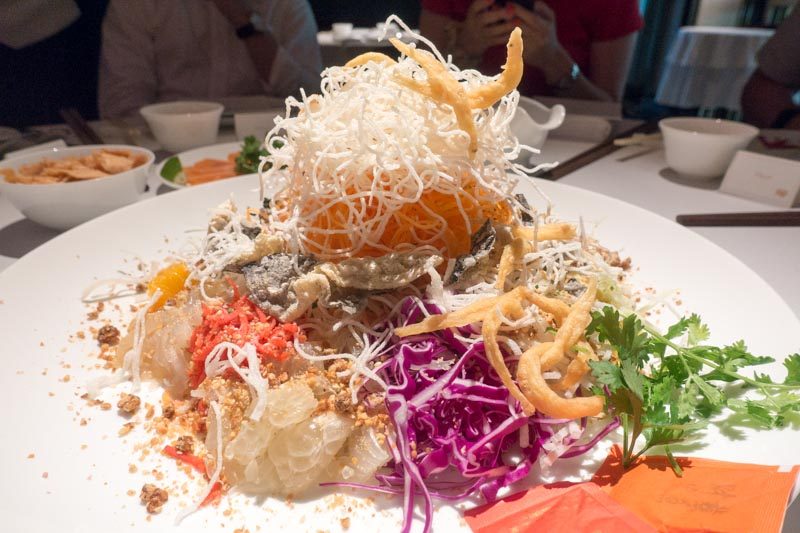 I was treated to Madame Fan’s Premium Dinner Set Menu (S$238++), a seven-set course that starts off with the Prosperity Yu Sheng.

Not only was this yusheng stunning to look at, but it was also refreshing, zesty and light, thanks to the fact that it had more fruits than vegetables, and was topped off with a yuzu-based sauce rather than the usual sour plum dressing. 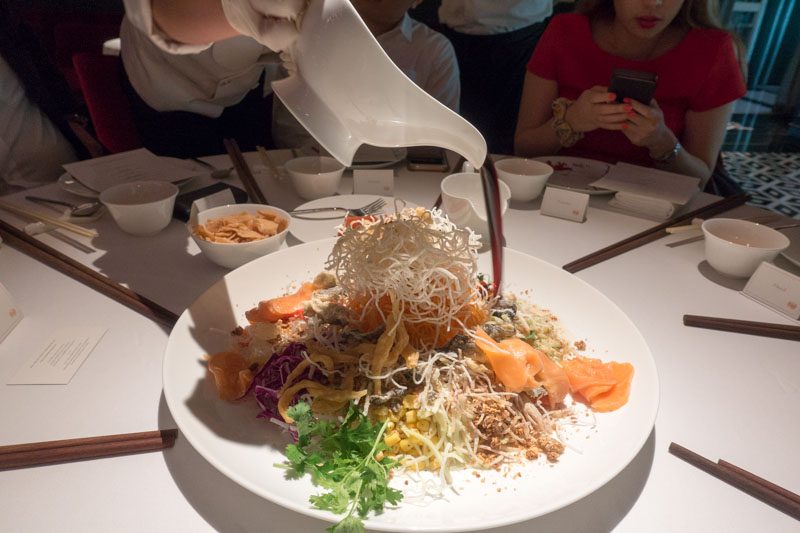 Though the yusheng had the typical ingredients such as freshly sliced salmon, gold crackers and grated daikon, I noticed that it also had other unique surprises, such as crispy fish skin, sweet corn, purple cabbage, mandarin oranges, green mango, seaweed and more.

I loved that the yusheng wasn’t drenched in sauce and it tasted more like fruit juice than the actual yuzu sauce. I’m not even ashamed to say I downed two to three servings of the Prosperity Yu Sheng. The yusheng invigorated my palate and made me want more. 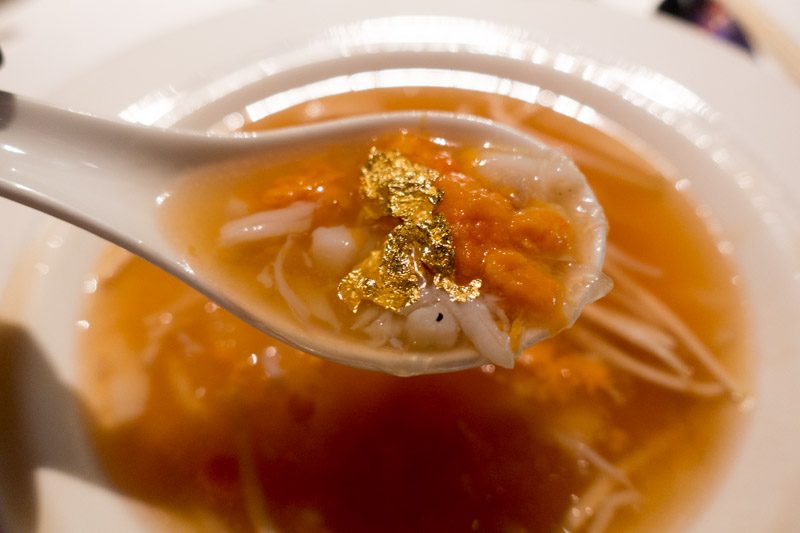 The Bird nest, crab meat and crab roe with supreme stock was one of my favourite items on the menu.

Generously topped with fresh crab meat, the soup was slightly thick and its consistency reminded me of fish maw soup. Taste-wise, it was slightly too rich and had a strong resemblance to chicken stock, but none of that MSG seasoning.

Thankfully, the large chunks of delicate crab roe and bean sprouts helped ease the richness, though it still left me feeling slightly jelak. 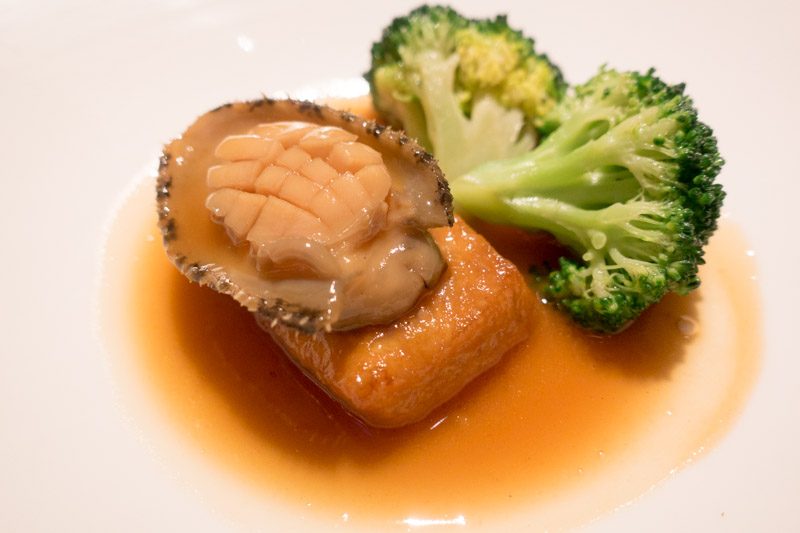 If you’re looking to impress your relatives, the South Africa Abalone and Tofu with Seasonal Vegetables is bound to score major points.

The South Africa Abalone was insanely huge, almost the same size as my tofu and really juicy. While most abalones are tough to chew, this abalone was well cooked and I bit through it with ease.

The fried tofu, on the other hand, was crisp on the outside and very delicate on the inside — it was so fragile I had problems picking it up with my chopsticks. So fair warning, use your spoon instead. 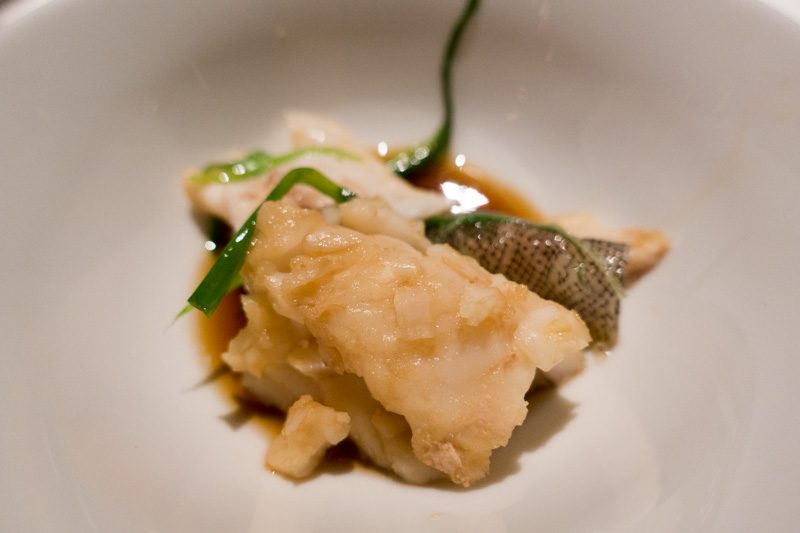 The garoupa was moist and sweet, and the soy sauce with a slight heat from the ginger gave the dish the right amount of flavour to let the fish shine.

My only gripe was spending a good amount of time picking out the huge bones from the fish, but it may just be the portion I was served. 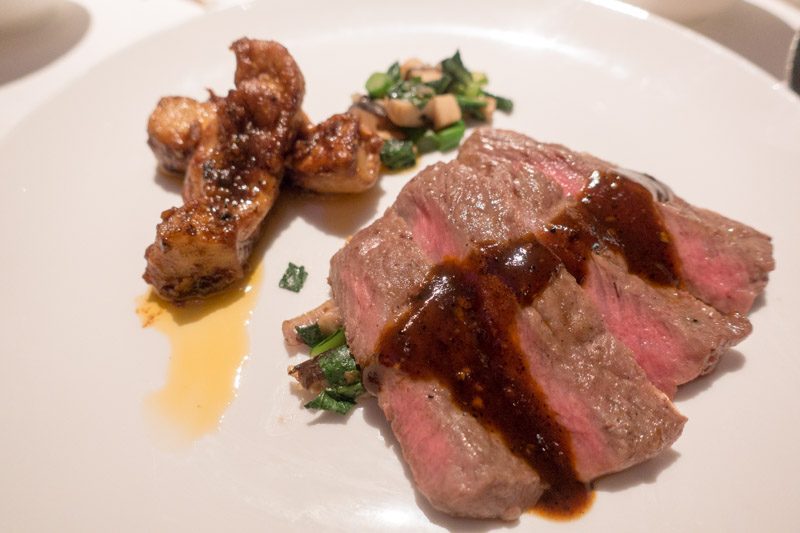 Next, a knockout dish that I would come back for again: the Charcoal Grilled Wagyu with Foie Gras, which sat on top of a bed of sauteed garlic vegetables. 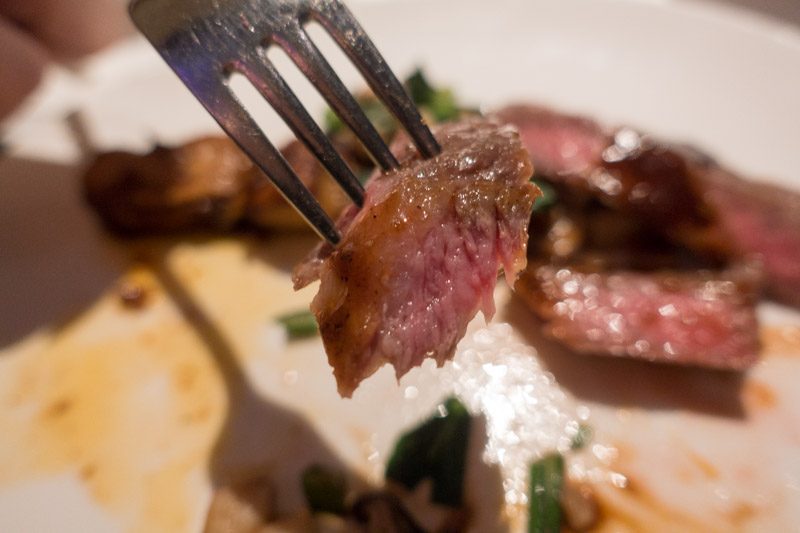 Lightly seared over a sizzling hot charcoal grill, the wagyu beef was tender and moist, and slightly pink on the inside. It was already cut into slices so you can take a bite out of it easily.

The sauce was smoky, sweet and tangy, and reminded me of good ‘ol barbecue sauce, but with a slight tinge of alcohol and acidity. 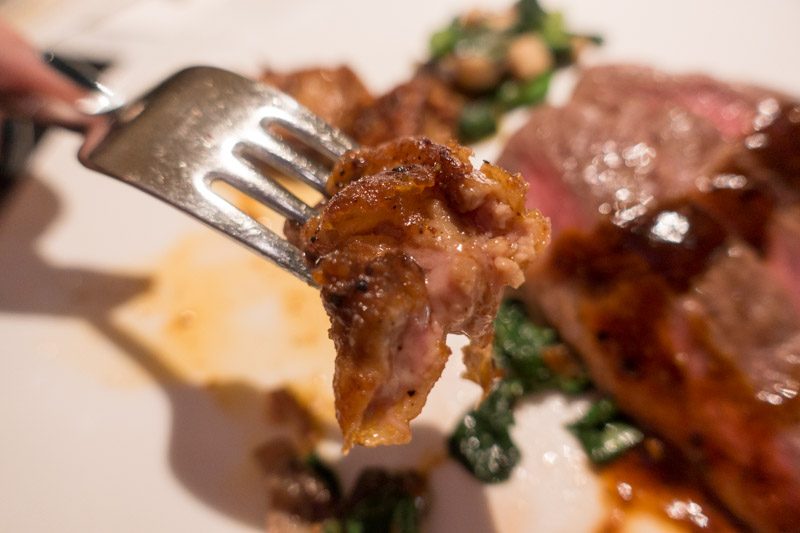 The star of the dish was the foie gras. When the dish was first served, I thought they were pieces of tofu or chicken. However, upon cutting into them, I quickly realized these were foie gras.

Fatty, soft and absolutely drool-worthy, the foie gras had a charred exterior with a subtle caramelised sweetness, and melted in my mouth like butter. In fact, I had trouble holding the pieces up with my fork because of how delicate they were. The only carbs in this entire menu was the Braised King Prawn, ginger and spring onion with Ee Fu Noodle that came in full portions, unlike other Chinese restaurants that dish your noodles out into smaller bowls.

The ee fu noodles were soaked in gravy, which made it overly soft and soggy. However, the braised king prawns were definitely the heroes of the dish, it was really sweet and firm with a tinge of smokiness from how it was charred. 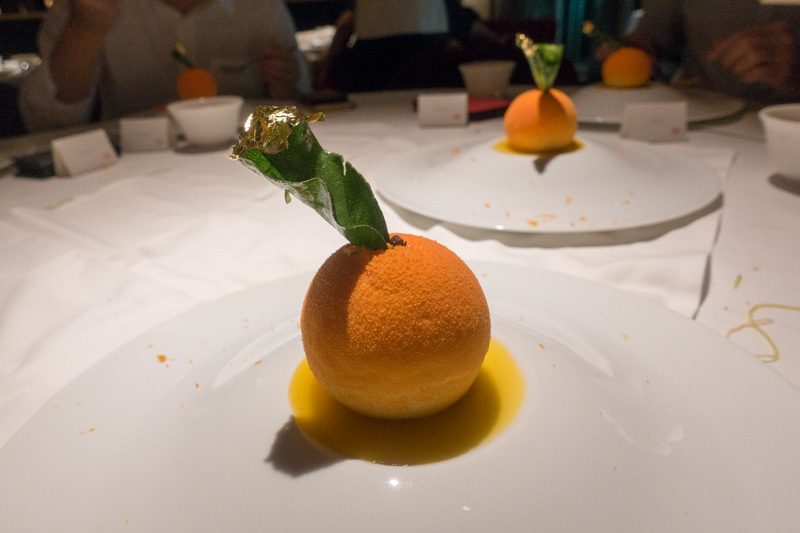 Ending the meal was the Chocolate Cremeux with Mandarin orange. Playfully shaped like a mandarin orange, this dessert was almost too pretty to eat. 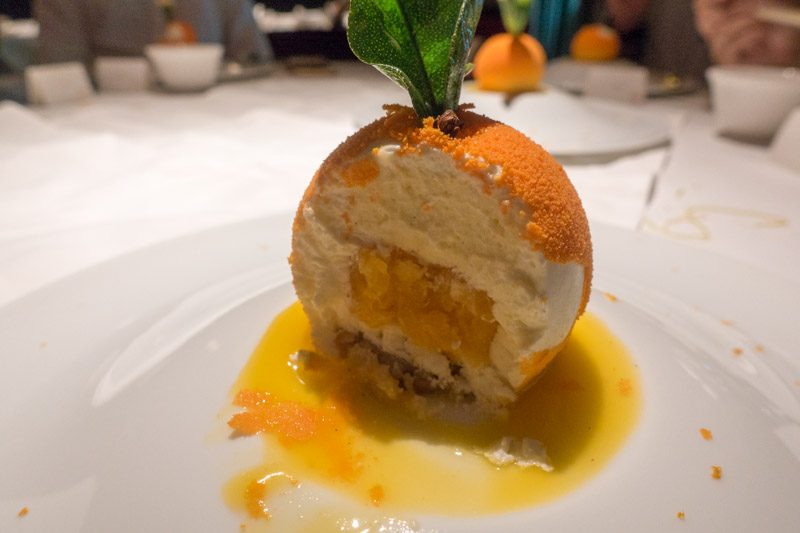 Upon digging in, the delicate mandarin orange shell cracked upon and revealed a dense and smooth cream, which was a mix between white chocolate and ice cream.

Every bite was tangy and sharp thanks to the various ways Madame Fan incorporated mandarin orange into the dish, which cleansed my palate, and was a great way to end the meal.

Though there were a few hits and misses, Madame Fan’s Premium Dinner Set Menu found a way to incorporate traditional flavours into their dishes and it was certainly ingenious in coming up with modern twists to its menu.

Its Charcoal Grilled Wagyu with Foie Gras was one of the best I’ve ever tasted, and I left the dinner feeling thoroughly pampered and satisfied.

If your budget isn’t that big, fear not. Madame Fan has other set menus on hand as well, such as the Set Lunch Menu (S$78++ per pax) with Sri Lankan Mud Crab Wonton, or its Dinner Menu (S$128++ per pax) featuring Wasabi prawn and Steamed silver cod.