Last month, after having a meal at Bugis, my friends and I went in search of a dessert place nearby. We passed by Monarchs & Milkweed Gelato, near Haji Lane, and decided to give it a go. Thoroughly impressed by their gelatos, I had to go back and try their other flavours. I brought a fellow gelato lover with me to try this place out. Upon entering the shop, we were greeted by this beautiful installation of a logo. The plain white background is filled up by gold metallic butterflies, which was what caught my attention at first. The store is rather small, but Monarchs & Milkweed Gelato maximised their space really well by placing their seats against the walls, leaving the middle of the store relatively empty, which made it easy to walk around. Some seats were also facing scenery, which opened the space up and allowed natural light to get in.

Monarchs & Milkweed Gelato is run by two owners, Eric and Mandeep, and they were so kind as to entertain my many questions for them. They used to work as chefs together, but decided to open up their own gelato haunt. They make their own gelato and source for the ingredients themselves.

They are always looking and experimenting for better flavours, which causes them to constantly change up their source of the ingredients and their menu. This may result in the gelato tasting slightly different at times, but the end product will always taste good.

What I tried at Monarchs & Milkweed Gelato

Monarchs & Milkweed Gelato’s pricing is pretty standard: S$5 for a single scoop, S$9 for a double scoop, add S$1 for a premium flavour, and add S$1.50 for a cone. When I first walked in, I ordered three flavours, Roasted Pistachio, Burnt White Chocolate, and Ispahan.

I got the Burnt White Chocolate (S$6.50) in a cone, as I felt that it was the flavour that would match the cone best. The Burnt White Chocolate tasted like caramel coffee, and was milky with cocoa bits within it. The cocoa bits gave a little crunch to the gelato, which I appreciated. As for the “burnt” portion of the ice cream, I clarified with the owners and found out that they burned the white chocolate slowly and gradually infused it into their gelato.

The cone was so sturdy that even after half an hour, it was not soggy at all and was still crunchy! The waffle-like cone was buttery and slightly savoury, which really complemented the burnt white chocolate. All in all, this was definitely one of my favourite flavours. 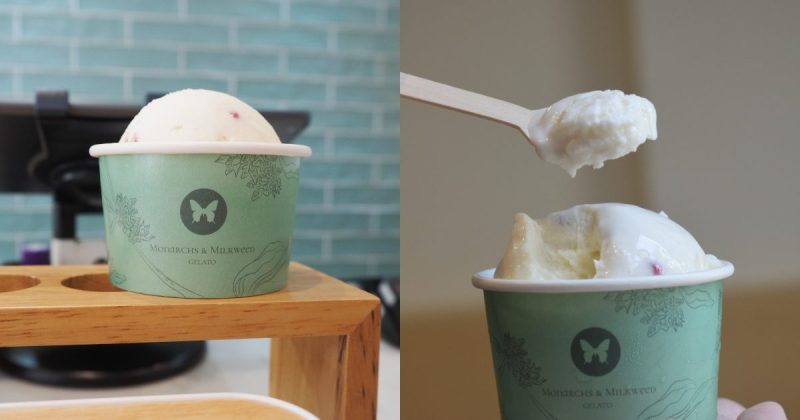 The Ispahan (S$5) came in a cup and was light and refreshing. It’s made up of lychee, raspberry and rose, and reminded me of Sogurt’s Lychee flavour. The lychee flavour is the most prominent one, but it comes across as soothing.

It tasted like a flower garden due to the rose, and it was speckled with red raspberry granules, which were slightly sour and gave a nice contrast to the sweet gelato. This flavour is perfect for a hot summer day.

Ispahan is actually a famous macaron flavour, created by Pierre Herme. Eric and Mandeep decided to make a gelato rendition of it, and while they were not the first to do so, this is still delectable and enjoyable. 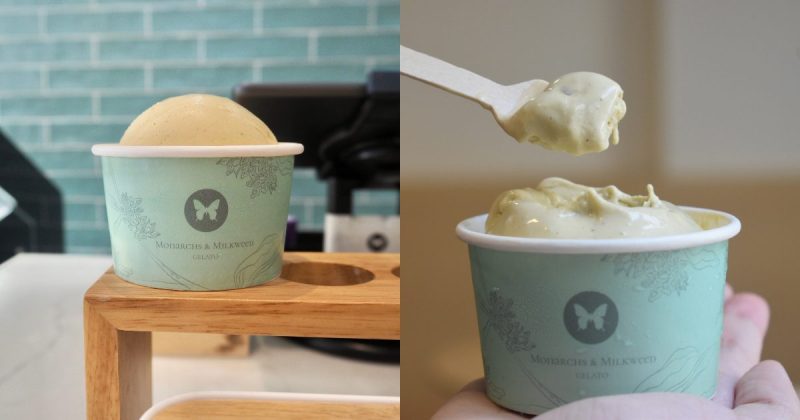 The Roasted Pistachio (S$6) is a premium flavour. It was creamy and tasted exactly like eating a pistachio nut. The pistachio flavour was strong but it was just the right amount and was not overpowering at all. The pistachio nut is imported from Sicily, which results in a heavy and fatty gelato. Pistachio lovers will definitely enjoy this one.

They used to have two different Pistachio flavours, but have since cut down to one.

After tasting three amazing flavours, I thought that I needed to give the others a taste too. So, I went back to the counter and got three more. The Soursop Mint Sorbet (S$5) is one of the three sorbet flavours they had.

It was very refreshing as it does not contain dairy, so it was not cloying at all. The sorbet tasted exactly like soursop; it was sweet and slightly sour. There was a tinge of mint, which cut through the sweetness of the sorbet, and added a slight cooling sensation to each bite. It was really delightful and helped to chase away the heatiness from the sun. I had initially eyed the Brown Butter Sage (S$5) with caution, as I thought it was an out-of-this-world combination, especially for gelato! However, the owners recommended it, so we gave it a try.

Despite my initial scepticism, this turned out to be my favourite flavour of the day. It had speckles of brown and green— the brown being the browned butter, and the green being the sage.

This gelato looked and tasted like Christmas. It was very reminiscent of salted caramel and was slightly savoury, in a good way. There was a hint of a herbaceous aftertaste due to the presence of sage, which really complemented the butter.

The combination of sage and brown butter can be usually found in pastas and raviolis, but as a gelato, it worked extremely well too. I asked the owners what their favourite flavours of gelato were, and Eric leaned towards Roasted Pistachio and Chocolate Hazelnut, while Mandeep enjoyed Goma (Roasted Sesame) and Peanut Butter Chocolate.

Monarchs & Milkweed Gelato is a must try with their cosy ambience and interesting flavours. Their gelatos will make you want to come back for more— and I’m living proof of that!

New in town: Poise – Indulge in European-Nordic fine dining by...