It’s 2018, and it seems like ugly is the new pretty. A wave of misshapen food has hit the shores of Singapore, including messy buns, ‘dirty’ buns and the like.

The newest addition to this unattractive family is Korean ugly pretzels, otherwise known as Monnani Kwabaeggi. Founded by Mr Kim Dae Young in Cheonam, South Korea, these ugly pretzels have become quite the sensation, so much so that over 500,000 pieces are sold each day in South Korea from over 100 franchise outlets.

It’s proof that ugly is now attractive – particularly so to the founder of Singapore’s very own Chewy Junior, Mr Kevin Ong. Mr Ong was won over by the “unique captivating taste that appeals to customers of all ages”. Thus he decided to bring the franchise over to Singapore, opening the first Monnani Kwabaeggi outlet outside of South Korea.

Located strategically in the basement of Hong Leong Building at Raffles Place, the Korean stall aims to draw the CBD crowd with its adorably ugly food. Monnani Kwabaeggi offers five different types of pretzels, so there’s no shortage of variety. All five flavours originate from Korea, so what you get here is exactly what they offer in Korea as well. Of course, Monnani Kwabaeggi’s success is owed to the Original Pretzel ($1.40). It is recognisable by how hideous it looks – twisted in no particular shape, the Original is essentially a blob of deep-fried dough, coated with a generous amount of coarse sugar crystals. Don’t be put off by its unpleasant appearance, because it is absolutely delicious. The experience is as such: you’ll first bite into a crusty sugary layer (and get the sugar all over yourself), before sinking your teeth through the crisp skin and into a very chewy dough.

It’s kind of like a donut; the outside is sweet, while the inside is savoury. But the difference lies in its texture. It’s denser than a donut, and much, much chewier.

You’d expect something so deep-fried to be swimming in oil, yet it was relatively oil-free. I don’t quite know what it is, but there’s just something about the snack that is so incredibly glee-inducing, you won’t want to stop at one. But I don’t recommend you only try the Original, because then you’d be missing out on the Premium Cheese Pretzel ($1.90) which is, in all honesty, Monnani Kwabaeggi’s best offering.

This looks quite different from the Original; instead of being shapeless, it’s thin and elongated. It’s certainly not ugly, but I don’t think it qualifies as pleasant-looking (I mean, it is a little phallic). But frankly, you won’t care how it looks like because it is mind-blowingly delicious.

The Premium Cheese is essentially the Original stuffed with premium cheese. Mr Ong won’t divulge what sort of cheese is used, but it is assuredly of great quality and flavour.

I’d say it tasted like a savoury cream cheese, tart and salty at the same time. It was luxuriously creamy, and you’ll want to coat it around your tongue and savour it slowly for the best experience. 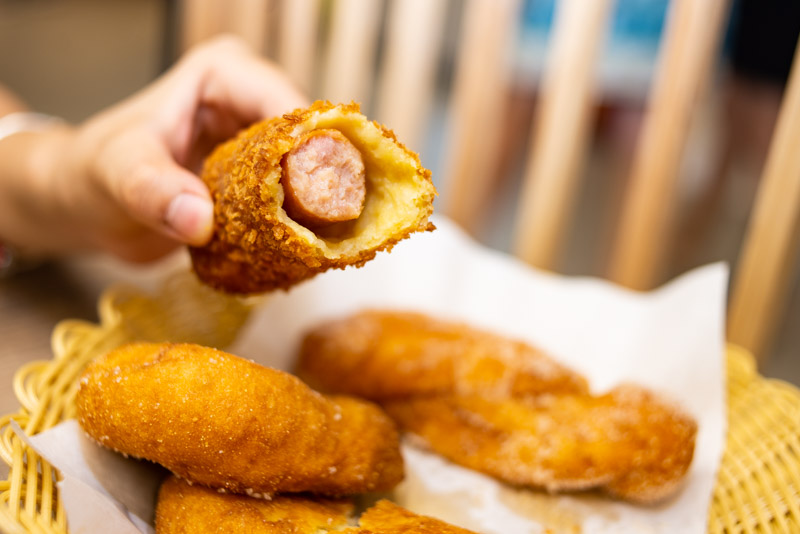 Another excellent variant of the Original is the Premium Sausage Pretzel ($3). Understandably, it’s a little pricier than the rest of the pretzels. This is similar to a corndog, but instead of cornmeal batter, the signature Monnani Kwabaeggi dough is wrapped around the hotdog and rolled in breadcrumbs before being deep-fried.

The breadcrumbs gave the pretzel an extra bit of crunch, which is always welcome. I was particularly impressed by how moist the sausage was. I’m not kidding when I say that this was one of the juiciest, if not the juiciest, sausages I’ve ever eaten.

It contained a good amount of fat without being too oily, and I could also detect actual chunks of meat in the sausage –  no doubt proof of its premium quality. 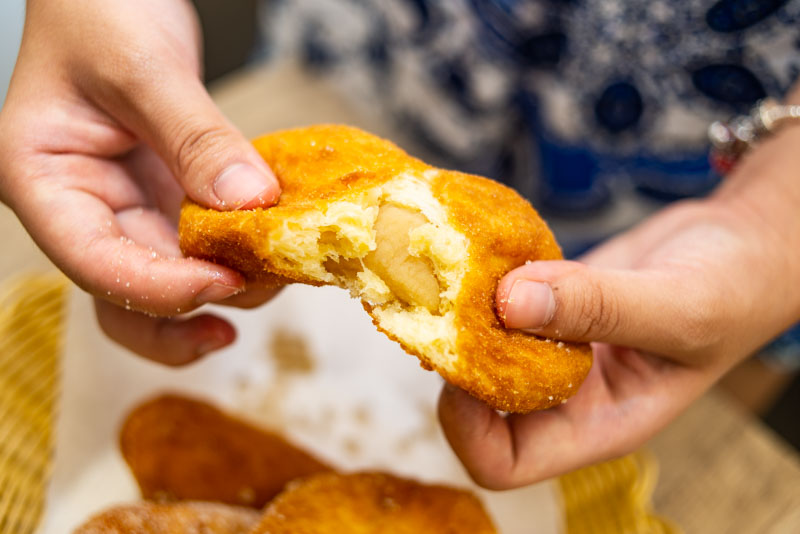 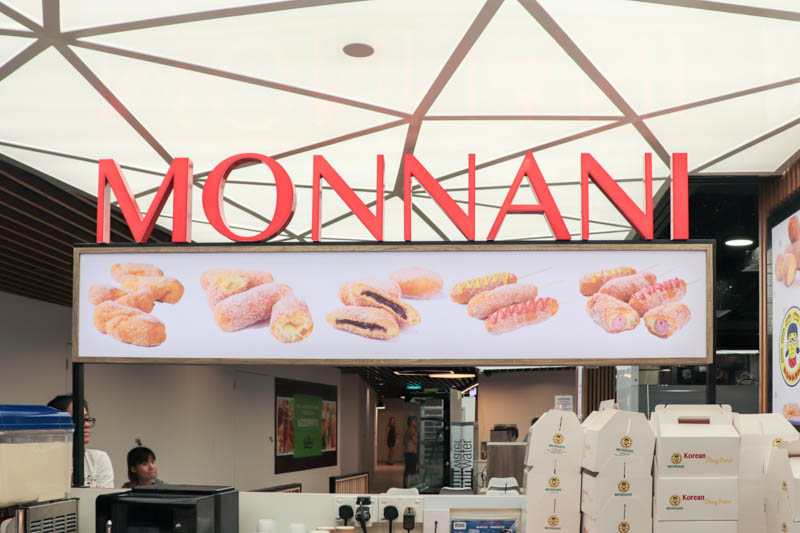 If you’re not into savoury pretzels, Monnani also has offerings for those with a sweet tooth. The Yuzu Pretzel ($1.70) boasts a warm, vibrant citrus flavour that provides a good contrast to the more savoury dough.

The yuzu paste used to fill the pretzel is imported from Korea, so you can be assured that it is of good quality. 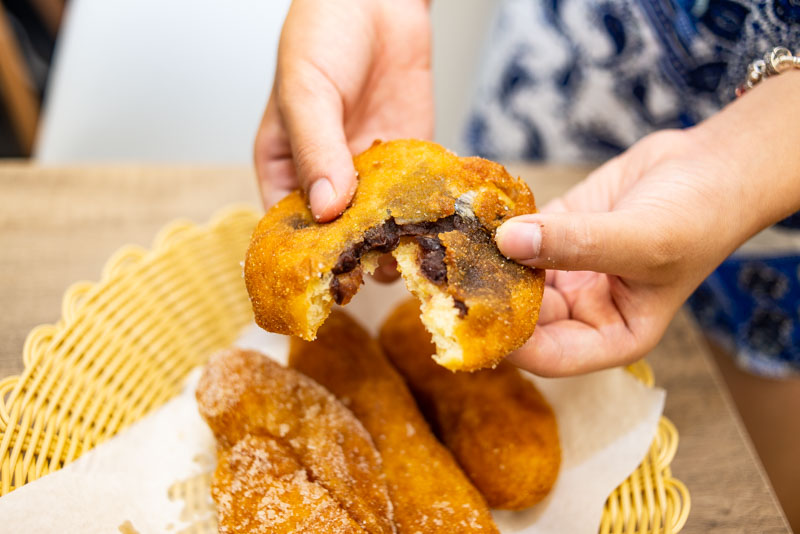 There’s also the Korean Red Bean Pretzel ($1.40), which is diamond-shaped and looks a little bit like taupok. 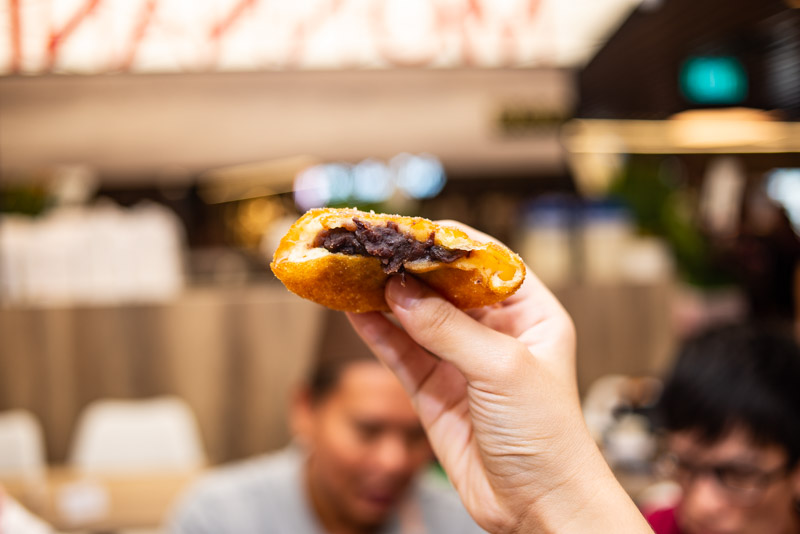 This was a little bit of a letdown because the red bean was too sweet, and I couldn’t quite detect a distinct red bean flavour. I’d definitely recommend the Yuzu Pretzel over this if you’re looking for a sweet pretzel. 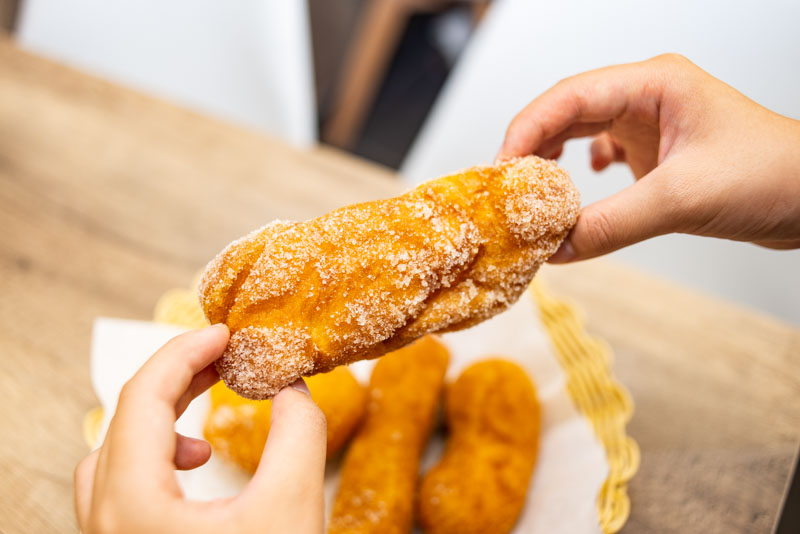 When Mr Kim Dae Young decided to create his own Korean version of churros, his first attempts came out so misshapen that he decided to brand his pretzels after using their ugliness.

I doubt he had ever foreseen that his ugly creations would receive the sort of popularity they do now, but I guess it’s just proof that food doesn’t need to look good to sell. I’d come back to Monnani Kwabaeggi for the Premium Cheese Pretzel any day, and I highly recommend that you visit the stall too.

The pretzels are incredibly affordable, and not to mention, delicious. It’s great for an afternoon snack, or perhaps a lunchtime treat!