The thing I particularly like about the good old bakeries and confectioneries is that despite selling a variety of baked goods, they all seem to have that one or two signature items which keep customers consistently making returned trips. While June Bakery is known for their tarts, Tiong Bahru Galicier Pastry is the place go for traditional nonya kuehs. And when it comes to old-school pies, well-informed Singaporeans who knows their pastry will definitely lead you to Oven Marvel.

Situated in a quaint little corner of Sunshine Plaza at Bencoolen Street, Oven Marvel is a humble establishment selling only three items on their menu. Chicken pies, curry puffs and muffins. Headed by Chef Johnny Ngiam, a veteran pastry chef with countless years of experience under his belt, the bakery’s concise menu items are neither fancy nor over-the-top. They are simply honest, freshly baked pastries and muffins handmade from scratch with quality ingredients. 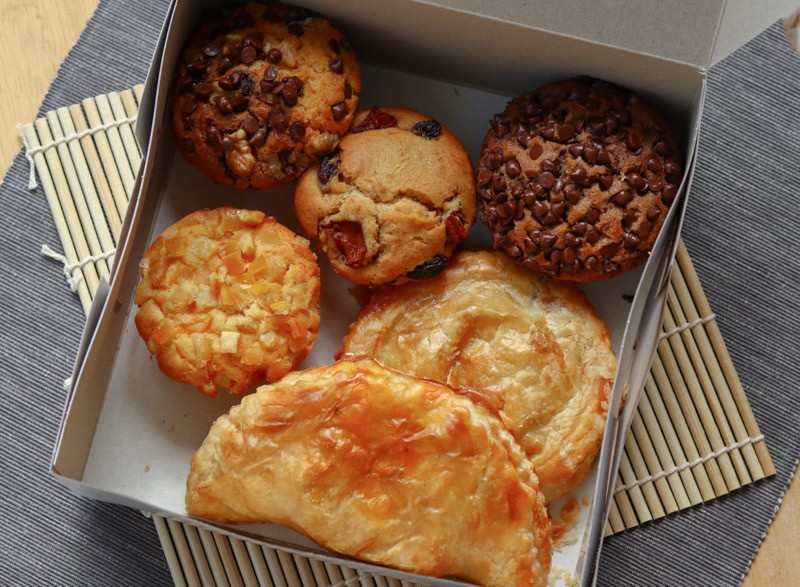 Having heard way too many good things about the pies at Oven Marvel, I knew I had to try Chef Johnny’s creations for myself. Since one of the best ways to pamper ourselves this ‘Circuit Breaker’ period is to watch Netflix while feasting on buttery pies and iced coffee, I caved in to temptation and made a take-away order of not only their renowned pies but also their muffins.

After reaching home with my #tapauplease loots from Oven Marvel, I had to admit I was a little disappointed as my pies and muffins were no longer warm to touch. Heeding the advice of Chef Johnny, I warmed the pastries in my oven for another five to seven minutes before digging in with anticipation. 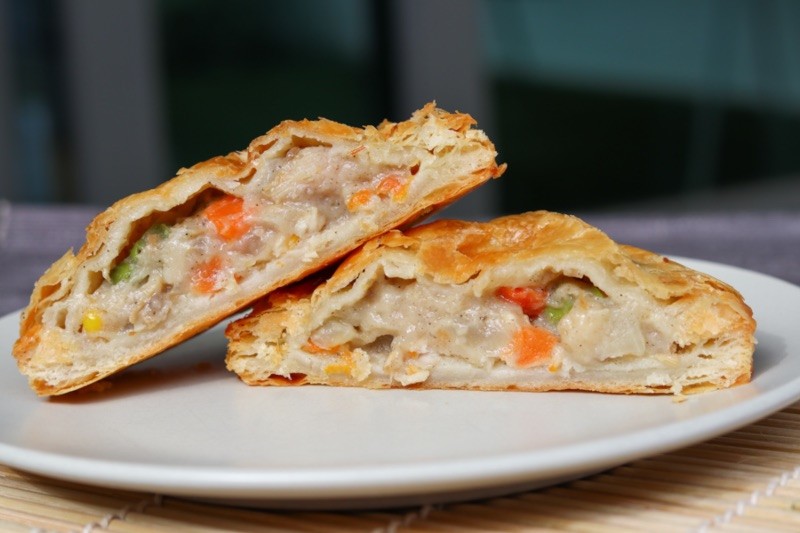 A luscious buttery aroma filled the air as I opened my oven and immediately, I dove heads into the Chicken Pie (S$4). Made with puff pastry, Oven Marvel’s Chicken Pie was light yet not overly flaky. The outer casing was fragrant and although it was crisp on the surface, it retained a nice chewy bite inside. Pie fans like myself will instantly notice the lusty unctuous mouthfeel that can be attained only by the use of good quality butter instead of its cheaper counterpart—margarine.

The pie’s chicken filling was peppery and creamy with generous chunks of tender chicken meat, potatoes and mixed greens. What attracted me to the filling was the medium-thick béchamel sauce the chicken was stewed in. It was rich and flavourful, complementing every bit of the puff pastry in unison. Unlike the curry puffs we usually eat from Old Chang Kee, Oven Marvel’s Curry Puffs (S$2.80) are also made from the same puff pastry as their Chicken Pie. Heaping servings of curried potatoes and diced chicken bits were enveloped in a thin layer of pastry and baked to a beautiful golden brown.

The potato filling was aromatic yet not overly spicy. Each potato cube had a velvety texture resulting in a snack that was light and clean to the palate. Despite the Curry Puff being loaded with carbohydrates, it was surprisingly not as heavy on the stomach and not greasy at all—definitely a plus point for this sinful but oh-so-delicious snack. 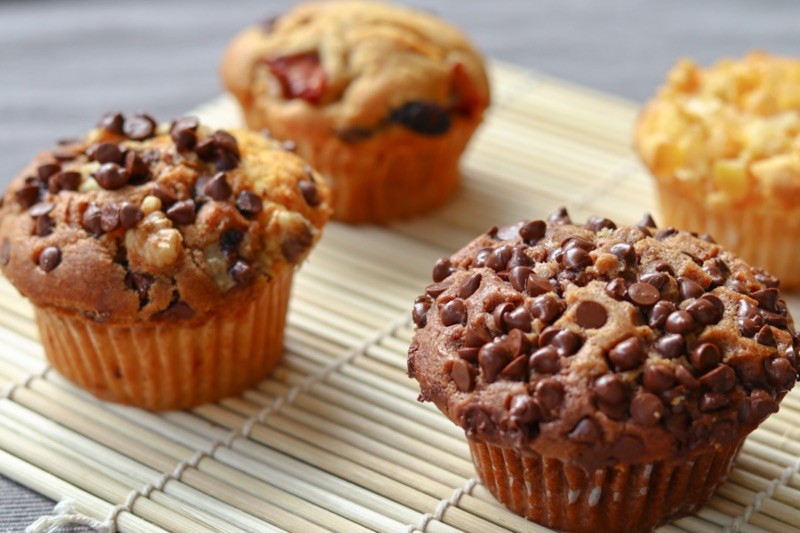 Moving on to the underdogs on their menu, the muffins. First-timers at Oven Marvel tend to focus only on their pies, overlooking these sweet little domes of goodness. Let me just put this out there, it will be your loss leaving Oven Marvel without their muffins in your paper bag. 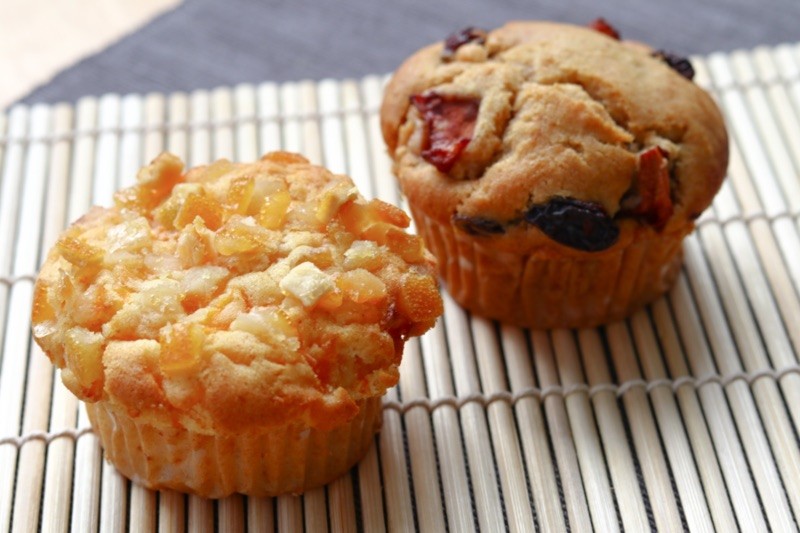 Starting off with the lightest flavour, the Apple Raisin Muffin (S$2.20) was fluffy and light as air. The comforting scent of baked apples and cinnamon wafted as I broke the into the muffin, revealing a soft, sponge-like centre. Overall, the muffin was subtly sweet with moist bites in between revealing cubes of fresh apples baked into its batter.

I was never a fan of candied oranges, thus when I saw a heap full of them sprinkled on the Orange Peel Muffin (S$2.20), I can’t help but approach it with caution. To my surprise, the candied orange used in the muffin was not atrociously sweet or overpowering. Instead, it was rather mellow, exuding more of a citrusy aftertaste. The best part of this tangy and mouth-wateringly delicious muffin was the use of fresh orange segments which resulted in juicy bursts of brightness with every bite taken. Choco’Wanna Muffin (S$2.80) is Oven Marvel’s take on the classic banana walnut muffin with the addition of chocolate chips. Unlike the other two fruit-based muffins, it was denser in texture due to the use of mashed bananas. The muffin was moist and packed with nuttiness from the toasted walnuts. It, however, lacked the flavour and fragrance of banana as I felt that it was overpowered by the generous use of chocolate chips sprinkled on top and scattered in the muffin itself.

“Go big or go home” is an expression used to encourage the act of extravagance and to go all out in whatever one is doing; when I tried the Double Chocolate Muffin (S$2.50), it immediately came to me that this might be Chef Johnny’s mindset when he created this devilishly good muffin. Chocolatey and superbly moist, it was a devil in disguise seducing me into the trap of addiction with every bite I took.

Indeed, Oven Marvel lived up to its standards and even exceeded them with not only their scrumptious pies but also their delectable muffins. This ‘Circuit Breaker’, fans of baked goods will be delighted as Oven Marvel will still be open for business. Instead of heading to the bakery to pick your items over the counter, you can now call or WhatsApp +65 9636 1503 to place your orders. Thereafter, all you need to do is make your payment by cash and collect your goodies any time, at your convenience!