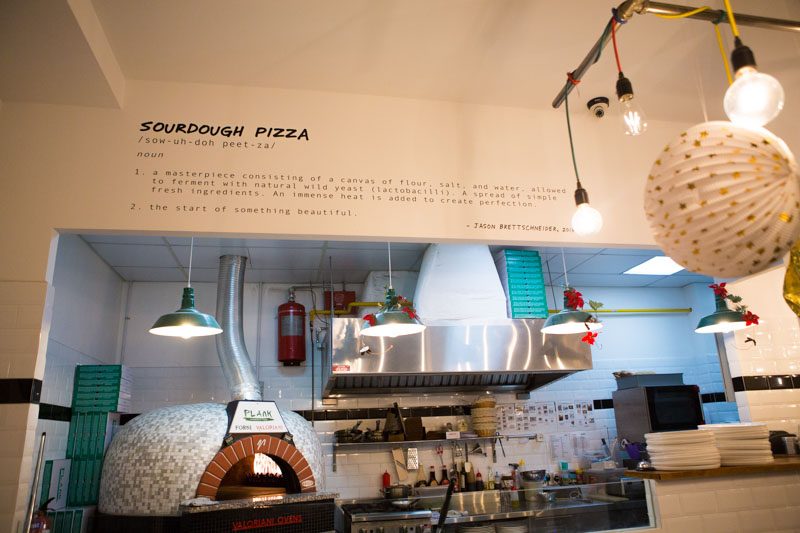 When it comes to pizzas, most people will agree that you can pretty much throw any topping on it, and you’re bound to love it (maybe except pineapples, which can fuel a heated debate, so let’s not go there).

The more meat, the better. But what makes a good pizza — its bevvy of endless topping combinations or a charred crust or the actual dough itself? 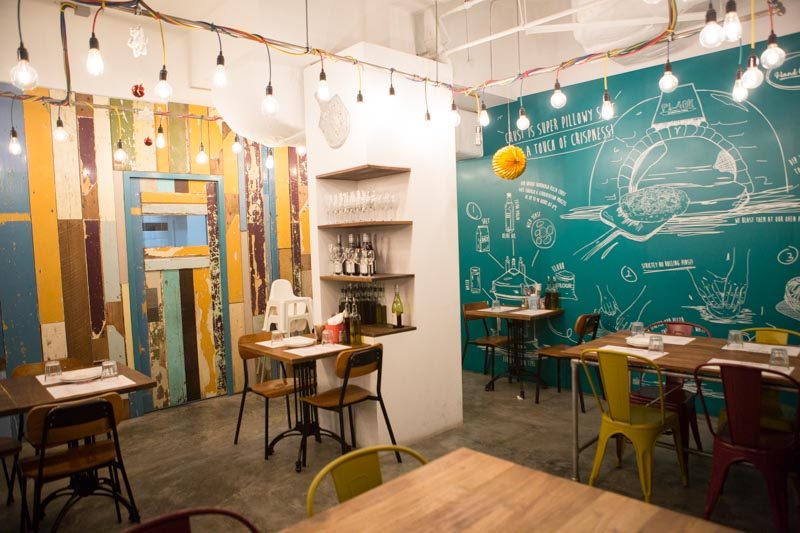 Well, here at Plank Sourdough Pizza, they’ve definitely set themselves apart by creating a pizza dough that’s based on their own sourdough recipe.

From the same folks who bake you pillow-soft bread at Baker & Cook, Plank Sourdough Pizza wants to remind you that not all pizzas are made equal. 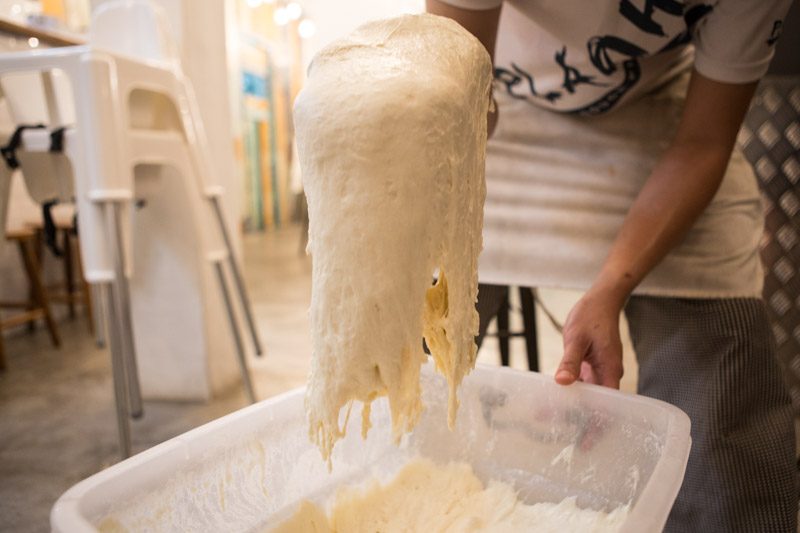 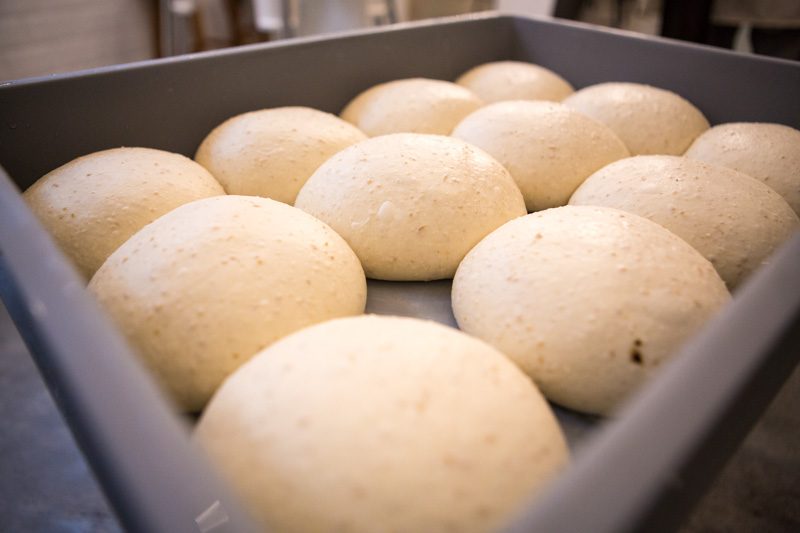 I sat down with Dean Brettschneider, resident baker boy and CEO of Baker & Cook to share with me about the patience it requires to get the perfect sourdough. They use the same fermentation process for their famous sourdough at Baker & Cook, leaving it to rise for up to 48 hours, at 8°C.

Utilising only wild yeast (levain), salt, water and extra virgin olive oil, the dough is pressed out using bare hands. Why no roller, you ask? Because it’ll remove pockets of air that’ll give the resulting pizza dough its light texture. 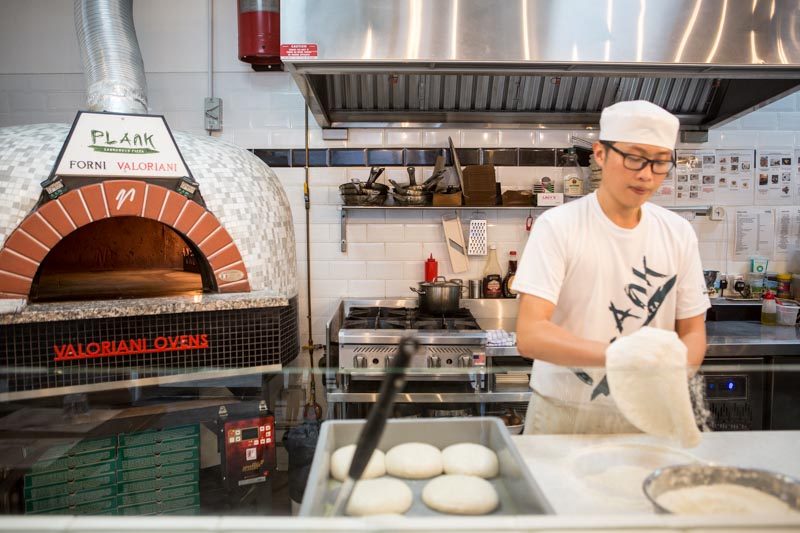 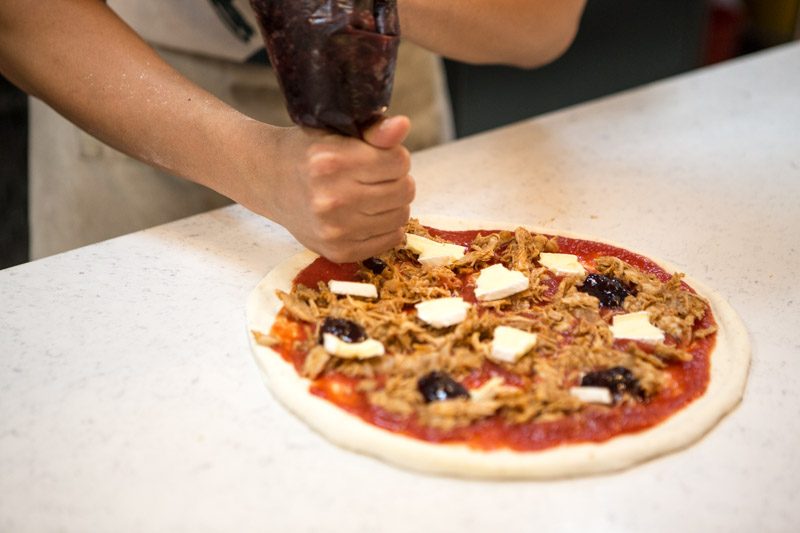 The first pizza I had, kneaded, topped and baked right before my eyes, was 4 ($24), a tomato-based pie with pulled BBQ chicken, cranberry compote, camembert and rocket.

Another question you may ask is, why is the pizza a number? Well, it’s simply to let diners know that they’re not an Italian pizzeria. Dean elaborates that naming a Margherita pizza on the menu as such, for example, will lead diners to have pre-conceived notions of what Plank seems to be, and not what it truly is. 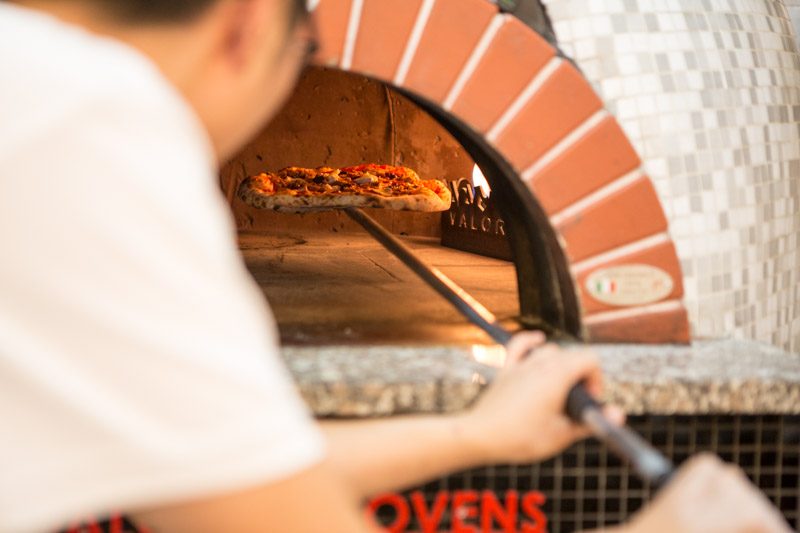 The pizzas are inspired somewhat by traditional recipes, but Plank still aims to create their own name with their unique creations. Into the stone oven it goes, and it barely takes a handful of minutes before it’s thoroughly baked and crisp.

The magic lies in ensuring all sides receive equal char time so that the crust is crackling and crispy to the bite. My mouth waters just from the aroma as it leaves the oven, and I dig into it immediately. I’m hit with a wafting scent of melted camembert cheese, nuanced by the acidity of the cranberry compote. It reminds me of Christmas. The flavours are so overwhelming (in a good way) that I barely have time to figure out what I’m tasting before I pick up another slice. You know a pizza’s legit when you can clean the entire pan before the next pizza arrives, and that’s how good this one was. 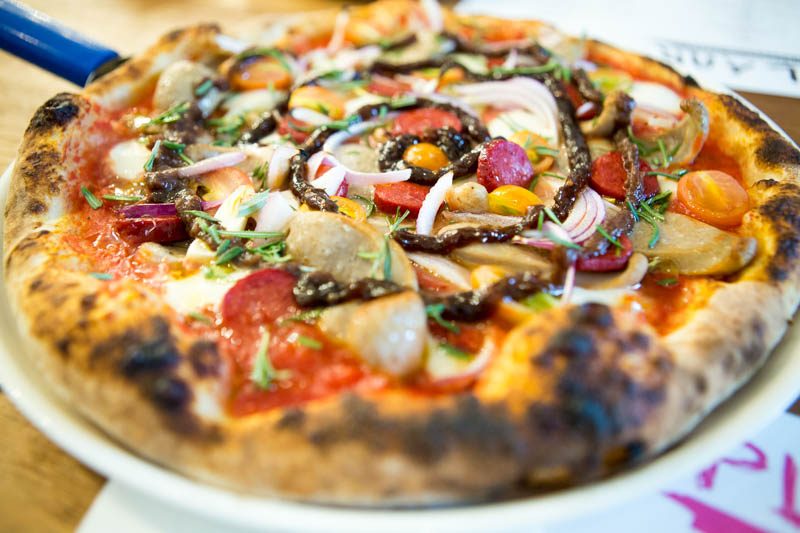 Meat lovers will adore this, hands down. Unlike most meat-dominated pizzas, I actually managed to detect the contrasting flavours from each meat, as well as textural differences. 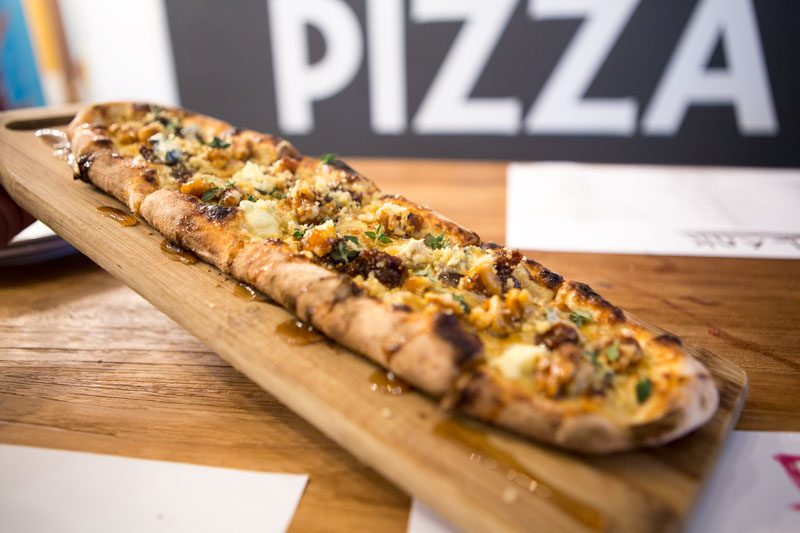 As you know, there’s always room for pizza, and this one is a special creation as the recipe was conjured with the assistance of a frequent customer.

The Cheese Plank Pizza ($14) is Plank’s take on a traditional cheese platter, complete with caramelised garlic crème fraîche, blue cheese, fig jam, caramelised walnuts, maple syrup, thyme and lemon zest. I dare say, this is one of, if not the most, innovative pizzas I’ve come across.

But does it work? It’s really a 50-50; if you aren’t a fan of blue cheese, you might find this one a little hard to stomach. As for me, I eventually cleaned the board once again.

I came to check out Plank for its sourdough pizzas, and what I got in return was so much more. I was honoured to get a behind-the-scenes look at the great attention to detail that goes into making the dough, and was fortunate enough to have a chat with Dean about his unforgettable pizzas.

Come to Plank for an excuse to load up on delicious carbs because we all know, anyone who says they don’t like pizza is a weirdough.