Even though I’m a huge sashimi lover, I was pretty late to the whole poké bowl trend when it first popped up here. It originates from Hawaii, and for the uninitiated, imagine cubes of marinated raw tuna or salmon strategically layered on top of greens and grains. And not forgetting the most crucial part: a price point of S$10 and above.

After my first experience at A Poke Theory, I was blown away by how high quality and substantial my bowl of salmon was, and I was hooked. And what better opportunity than this showdown to discover and compare the different poké varieties there are?

I decided to go for the OG poké brand in Singapore, Aloha Poké, as one of the contenders. I wasn’t as familiar with Poke Doke, which was one of the more recent brands to grace our shores, and I wanted to see how it would fare against the OG. Here’s a fun fact: Aloha Poké was founded by two Singaporean couples in 2015, who were inspired to re-create the poké experience after their vacation in Hawaii.

I visited their Bugis Junction outlet and decided on their fixed bowls available for my salmon, tuna and vegetarian options. 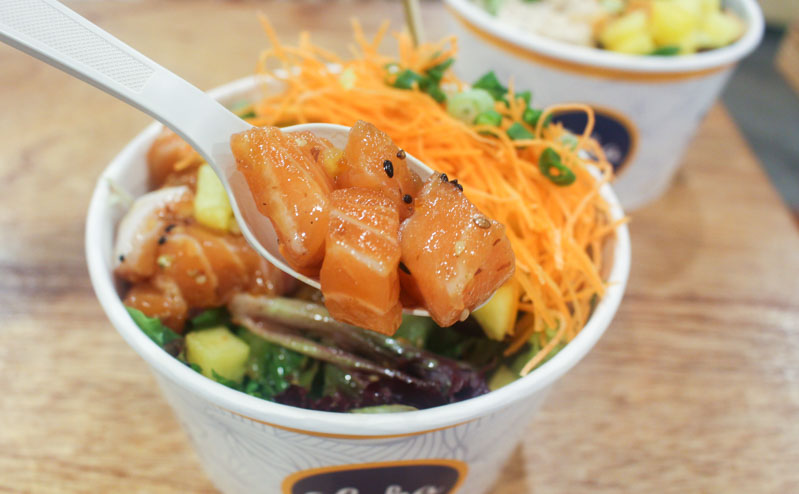 I was pretty impressed with the generous portion of salmon cubes given, which were glistening and thick.

I took a bite, and they were not only fresh but as meaty and chewy as they looked. I loved how the coating of sesame shoyu marinade added a savoury, salty flavour to the fish. 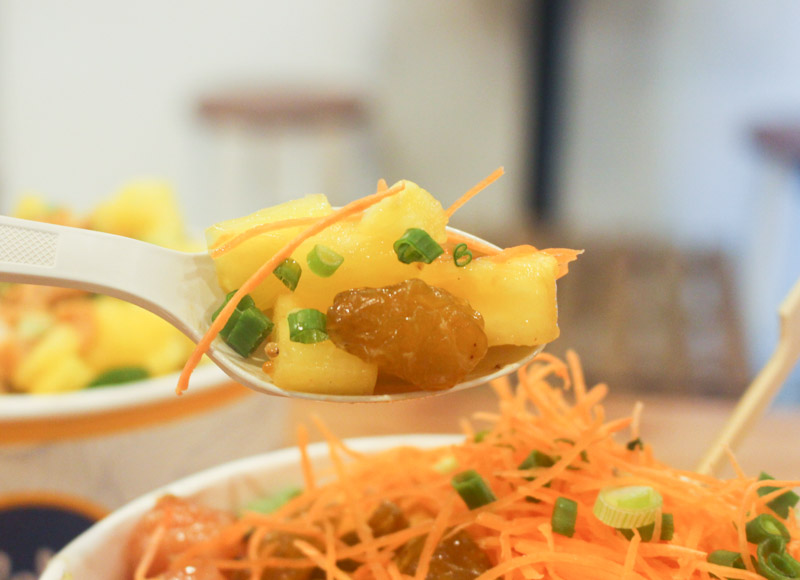 I don’t usually expect much of the side vegetables in my poke bowls, but these pineapple chunks were pleasantly refreshing, with bursts of naturally sweet and tangy juiciness.

I wasn’t a fan of raisins to begin with, so the hard texture and lack of much sweetness of these ones were not to my liking. 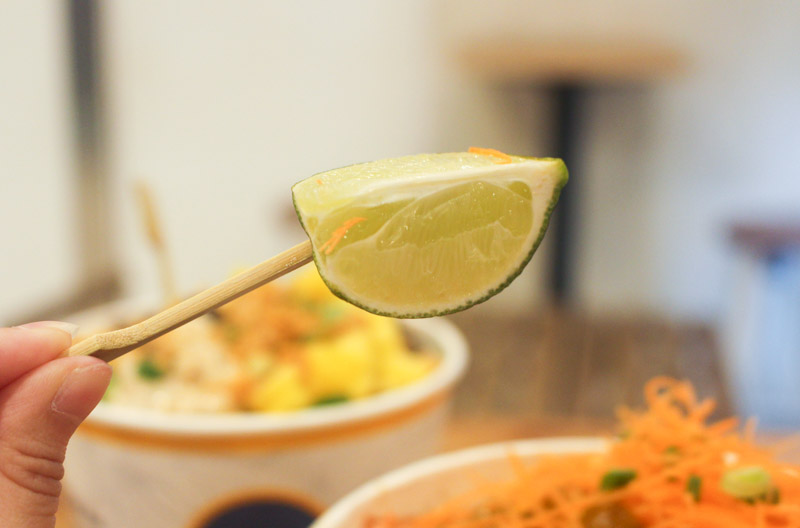 They also provide a lime wedge, which I thought was a nice touch in case you like a bit of zest in your bowl. It is not a must-have for me though! This bowl comes with a mixture of brown and white rice, but based on past experiences at other places, I expected the portion to be fairly small. Surprisingly, I found a more-than-decent portion.

A mouthful of the rice together with some salmon was perfect for my Asian palate. I don’t usually go for tuna, but if it looked as good as their Ocean Breeze (S$16.90), I have no complaints. 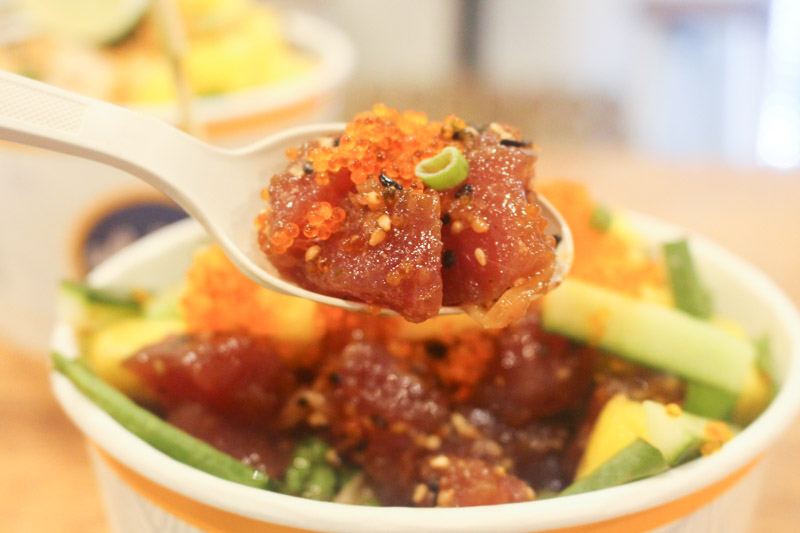 Each bite of the tuna was as fresh and delightful as the salmon, but the fish roe added tiny explosions of juicy, briny flavour. 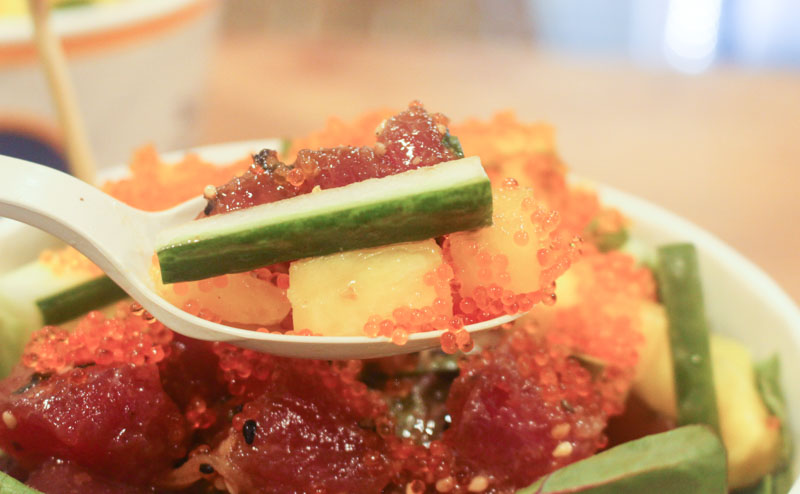 I loved how the tuna went so well with the refreshing crunch of the cucumber and pineapple chunks, and I could not stop myself from taking spoonful after spoonful. 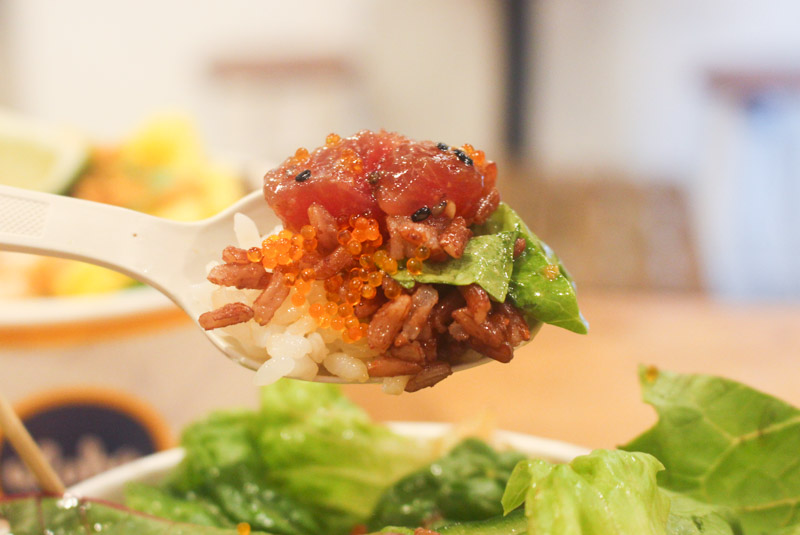 This bowl also comes with white and brown rice, which complemented the sesame shoyu’s saltiness from the marinated tuna. 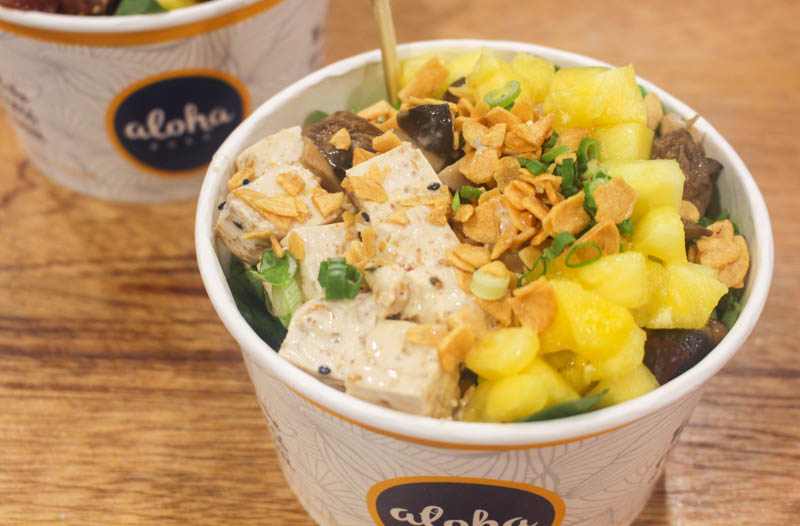 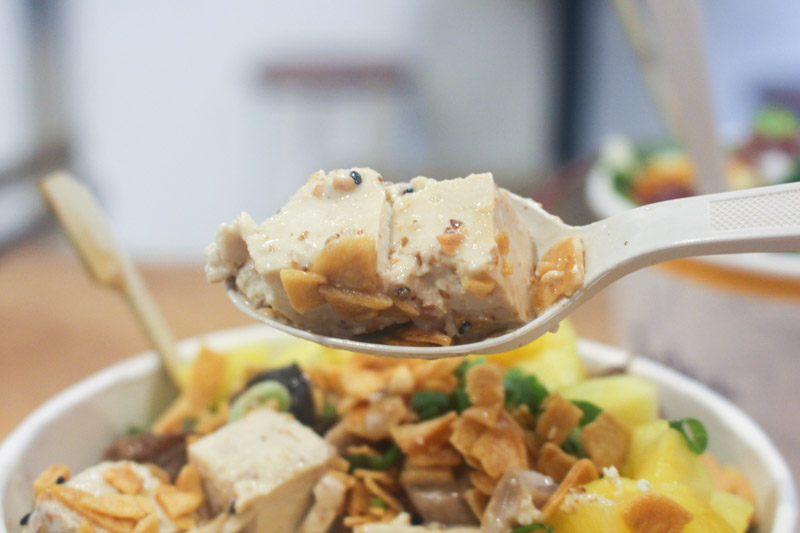 I appreciated how their tofu was not bland as I expected, even though it’s a non-meat alternative, but I would have liked a bit more savouriness to them.

The Japanese garlic chips provided a good crunch to the otherwise firm but tender tofu. 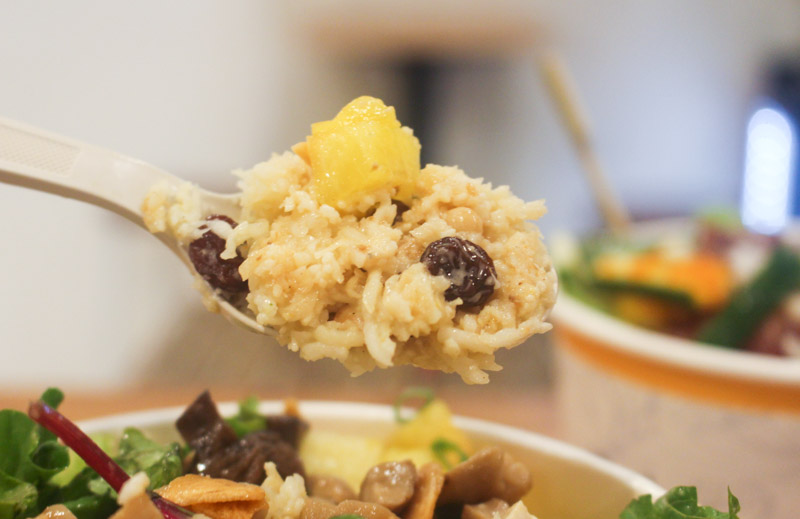 I know many will shrivel up at the thought of cauliflower rice, but these avoided being overly mushy and had some texture.

While this bowl was super filling and did not bore my palate with plain greens, I still think that S$17.90 is extremely pricey, and would recommend customising your own bowl which is more affordable.

I do think Aloha Poké lives up to its hype, and it’s clear from the quality and portion of the ingredients. 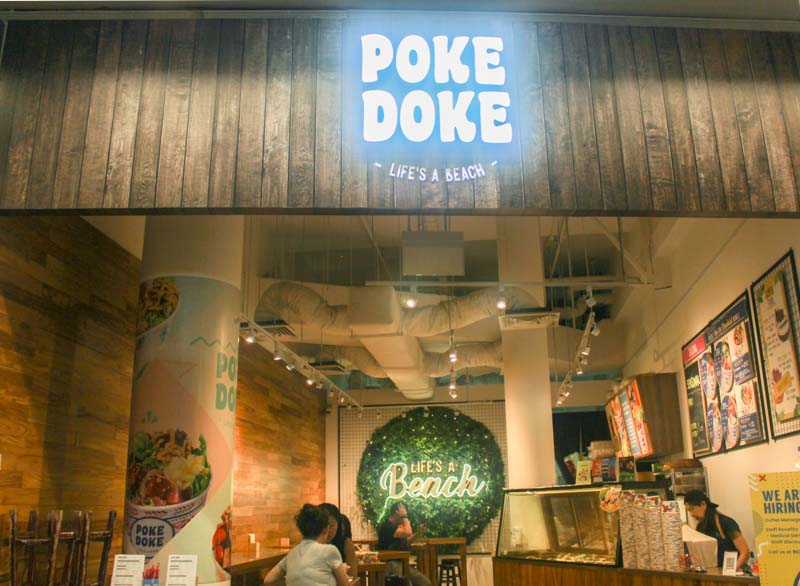 Poke Doke opened up in 2017, and I was suprised to learn that it only has one outlet at Millenia Walk. Their fixed salmon bowl served here is the Poke Doke Signature Bowl (S$14), which is around S$2 less than Aloha Poké’s version. Their salmon cubes are roughly as thick as Aloha Pokés, and there was a pretty good amount of them. Given that they tasted of high quality, were meaty and tender, I had not much to express apart from nods of satisfaction. Considering that a bowl comes with an onsen egg, I was surprised it costs less than Aloha Poké’s version.

It just seemed natural to give the egg a good mix with the ingredients, and it gave the white and brown rice—which could be a tad dry—a deliciously silky and eggy coating I never knew my taste buds needed. 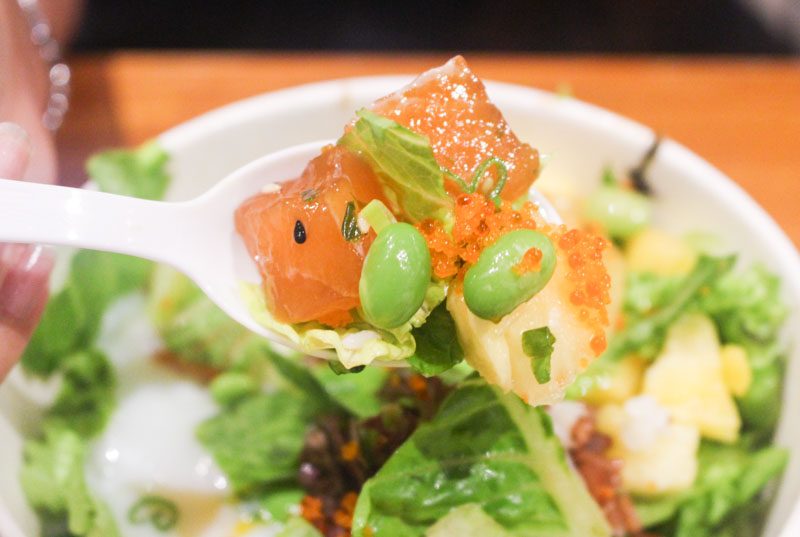 The edamame and almond toppings weren’t what I would have picked, but they did give a good crunch and texture.

I would have to pick this bowl over Aloha Poké’s as my preferred salmon option, and the winning factor was definitely the onsen egg along with the more affordable price point. 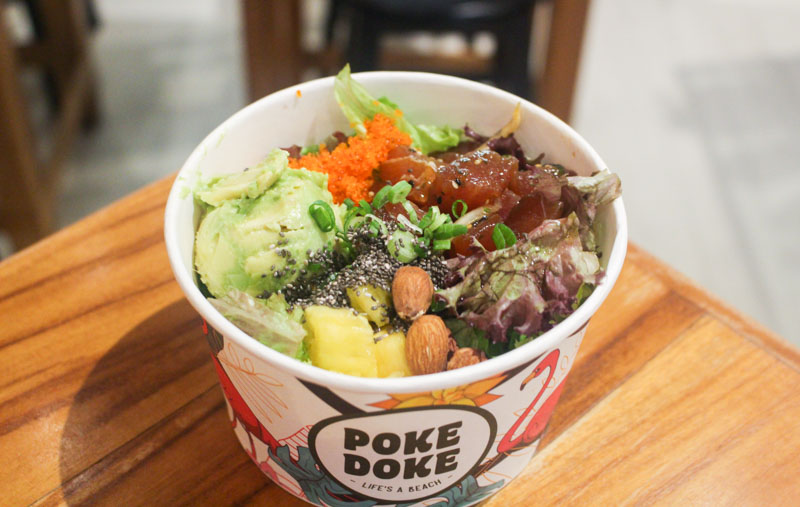 Their Powerfood Tuna Bowl (S$14) also costs around S$2 cheaper than Aloha Poké’s tuna bowl, but comes with a good chunk of avocado. And since I knew how expensive avocado toppings can be, this bowl instantly felt more worth my money.

The avocado was soft with chunky bite to it, but my only gripe was that it tasted a bit “off” and slightly sour. 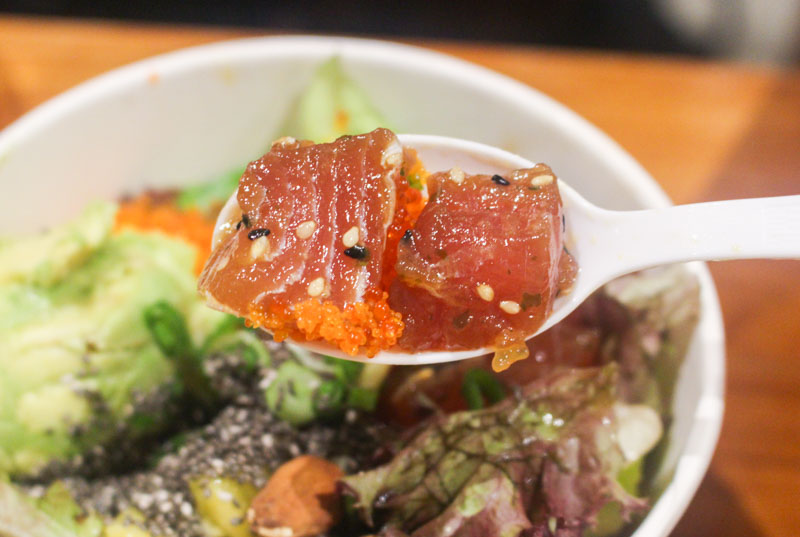 Somehow, the cubes of tuna just seemed extra glossy and tantalising here. They used a shoyu marinade, similar to Aloha Poké’s, but their natural freshness still shined through. 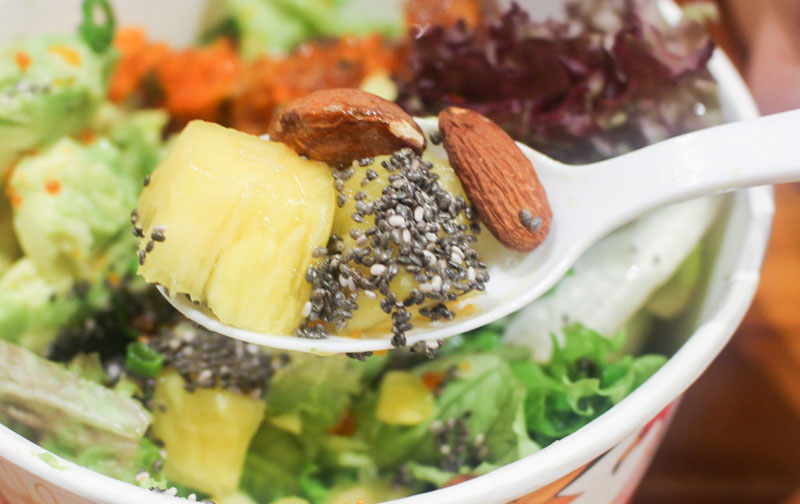 These pineapple chunks definitely rival Aloha Poké’s because of how similarly juicy and sweet they were.

However, I do think that this bowl is more worth it if you consider the avocado topping and more affordable price point. 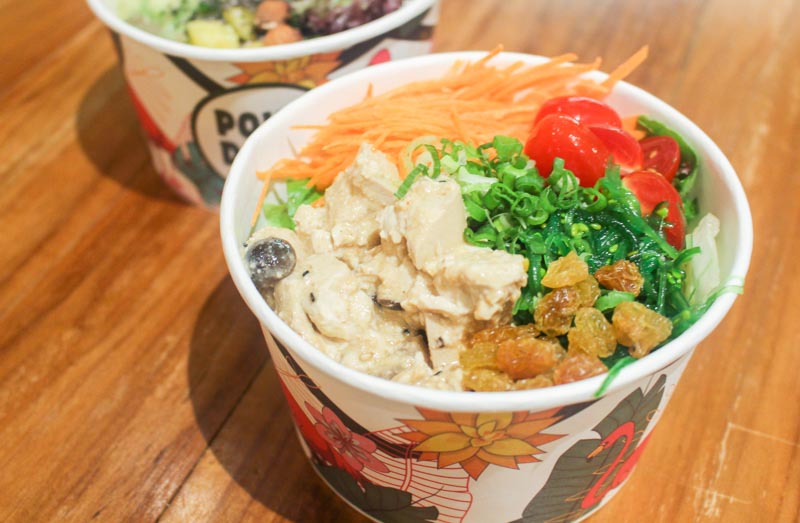 Their Vegetarian Shitake Tofu Bowl (S$12.50) is definitely a much more affordable than Aloha Poké’s S$17.90 version, but then again, the mushrooms given here are a lot smaller. 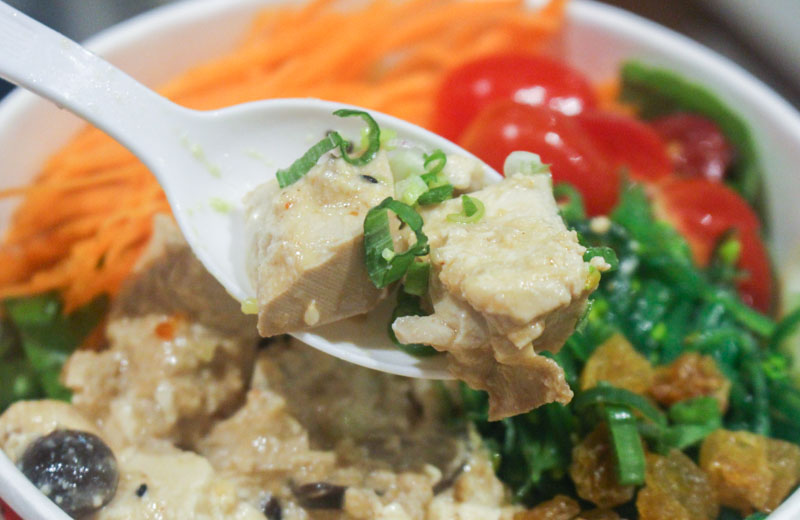 I was expecting the tofu to be fairly bland, but was greeted with a delightfully sweet flavour, similar to that of inari (deep-fried beancurd skin) sushi. I have to say I definitely prefer this over Aloha Poké’s tofu.

These ones are also on the softer side though, so if you prefer a firmer texture for your tofu, I would say go for Aloha Poké’s option instead. 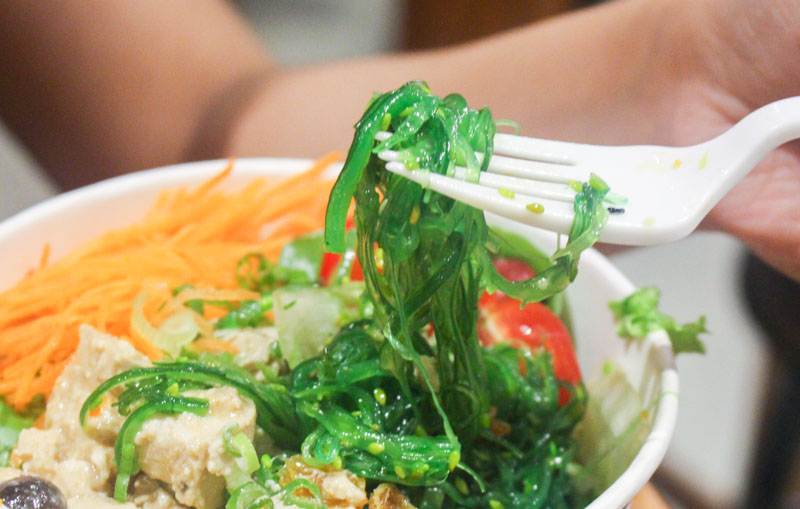 I’m not a huge fan of Japanese green seaweed because of that pungent briny taste, but this one was one the sweeter side which made it much more pleasant. 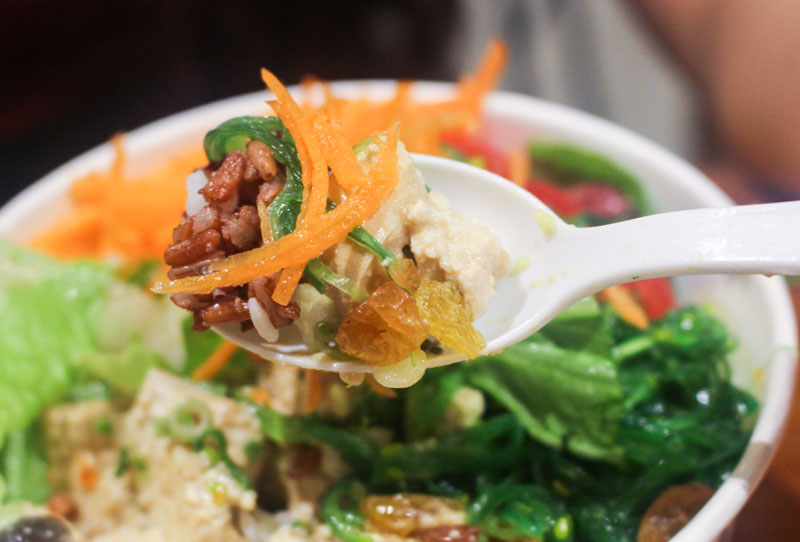 A bowl also comes with white and brown rice, raisins and carrot shreds, which I did not find super appetising as compared to Aloha Poké’s cauliflower rice.

Even though I prefer the sweeter tofu flavour from Poke Doke, Aloha Poké’s unique combination of vegetarian toppings has my pick. I still recommend customising your own vegetarian bowl though, which is also less harsh on the wallet.

Poke Doke might only have one outlet, but the quality of their food showcases their efforts.

The salmon and tuna poké from both places are on par for me in terms of quality, but I have to say I prefer Poke Doke’s version because of the ingredients and value-for-money pricing.

Aloha Poké’s vegetarian option, however, has my pick for its more interesting combination.

Of course, poké bowls are all about personal preference—both places offer the option of customising your own bowls—which is definitely much more affordable.

What are some of your go-to poké combinations?

Previous articleEmbrace Your Inner Hipster At Upcoming Art Market Twilight: Flea & Feast This 17 – 19 Jan
Next articleKumoya x We Bare Bears: Pose With Your Favourite We Bare Bears Characters This January At Bugis