We love a good comeback story, and if you think nothing can beat Mariah’s, Rasa Sayang Western Food might give the diva a run for her money. The legend goes that the famous Western food stall that inspired many a long queue at Block 711’s S11 Food Centre had reappeared on the food scene. Whispers ran through the grapevine of Facebook and people were wondering whether this new stall at Block 347 at Ang Mo Kio was indeed that Rasa Sayang Western Food. A few comments here, and confirmation by a family member of Rasa Sayang there, and the entire food community let out a whoop. Because, after a hiatus of three years, Rasa Sayang Western food was back—but better than ever? That’s where I come in.

The presence of Western hawker food in our local hawker culture has quite interesting beginnings, all with a sprinkle of colonialism, of course. The Hainanese immigrants are credited for this contribution, on top of Chicken Rice—a bunch of overachievers if I do say so myself.

During the days of British rule, Hainanese immigrants worked as chefs and cooks in British households, restaurants, or clubs. The same Hainanese immigrants then incorporated much of what they’ve learned during their employ in these British establishments into their own cooking when they opened kopitiams or hawker stalls. It’s a vital part of our Singaporean hawker lexicon as much as fishball noodles or mee rebus.

Since I hadn’t had the pleasure of trying Rasa Sayang Western Food before it went on hiatus, I was more than excited to see what the fuss was all about. Having already seen the reports on the snaking lines, I made sure to arrive just before dinner time one Tuesday evening.

Clad in striking orange uniforms and silvered-haired, the Rasa Sayang team works like a well-oiled machine calling out orders and handing out buzzers to hungry patrons trickling in. Moreover, the loud bickering of orders over the grill makes for such a typical Singaporean mise-en-scène—it’s heartwarming, to say the least. Impressed that Rasa Sayang even considered my steak’s doneness, I looked forward to digging into my Ribeye Chilled (S$13.90). I would have certainly sprung for the Fillet Black Pepper Aged (S$13.90) (Aged!) or the Fillet Mignon (S$13.90), but alas, they were sold out. I must say, these premium cuts do illicit a mixture of excitement and apprehension but more so the former.

My Ribeye Chilled was an exceptional medium-rare and blushing like a nervous bride on the inside. Complete with garnish and slathered with Mushroom Sauce, the queues were entirely justified. Tender and full of flavour, this was no sinewy cut with desperate aspirations to be something it was not. This was the real deal, and I would have this over a famous steakhouse chain, any day.

While the steak was good, the sides played right into their role of forgettable calefare. Each plate came accompanied with baked beans, coleslaw, garlic bread, and crinkle-cut fries. While I appreciate the nostalgia of baked beans straight from the can and overly-creamy coleslaw, I know Rasa Sayang can do so much better. Perhaps, a more acidic and shaper coleslaw, or their own spin on baked beans, or even their fries. The garlic bread, though homemade could use a little more TLC and a more generous spread of garlic butter. That way, Rasa Sayang can still hold on to its roots and still be relevant to today’s discerning palates. One can’t run away from the archetypal Chicken Chop (S$6.50) at Western Food Stall, and Rasa Sayang’s came perfectly charred and smothered with mushroom sauce.

Though, more restraint on the ladling of the sauce would have been appreciated. Abundance is all but celebrated until it borders on excessive, let’s just take it as an outpouring of nostalgia. It’s hard to screw up chicken chop, and here it was succulent and undeniably satisfactory. The real test, I’ve found, was with the Lamb Chop (S$12). Understandably, lamb is not a popular protein because of its reputation for gaminess and inclination towards being leathery when overcooked. Here, the lamb chops came with a good char laboriously sprinkled with aromatic herbs that might put some cafes to shame. They were an economical serving for sure, but given the taste, I might have ordered two just to make up for it. You might think Fish & Chips (S$6.50) is another thing that was leftover from our colonial masters and though that is true, they were actually created by Jewish immigrants in Merry Ol’ England. That’s right, “Immigrants, we get the job done”.

Here, we have a fine, thin coating of batter that reveals a buttery, silky fish that doesn’t require a knife at all. There is nothing worse than fish tasting like cardboard, so this certainly has my seal of approval.

The moniker ‘Western Food’ certainly belies just how Singaporean the cuisine is. While it can’t escape its colonial past, the dishes have morphed into something so quintessentially Singaporean that no would bat an eye if it were placed beside chilli crab.

The heritage behind Western food is just as fascinating as any other long-standing hawker dish, and Rasa Sayang Western Food is where you can find a piece of that. A word of caution: make sure you go early enough to beat the queues; they extend outside the coffee shop. 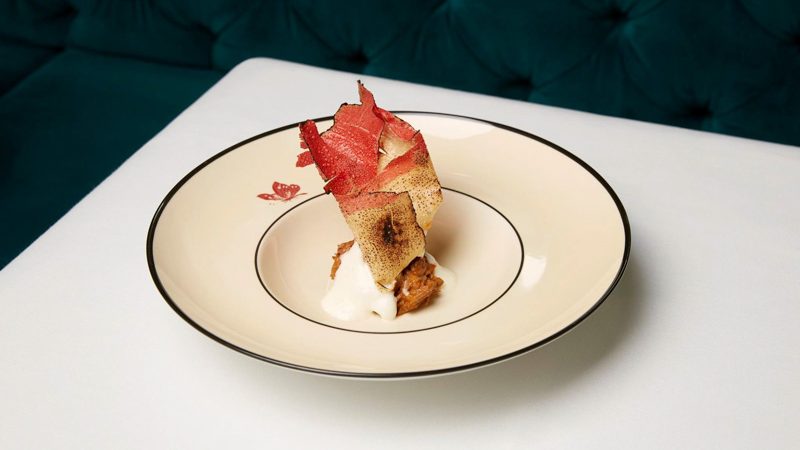 Get Fancy With New One-Of-A-Kind Gucci Dining Pop-Up At The Arts...