A new Muslim-owned cafe has joined the food scene! Fans of Working Title, Afterwit and The Mad Sailors will be happy to know that the minds behind these cafes have introduced Santap Cafe; a new place with chill vibes serving great food to satisfy your tummies. 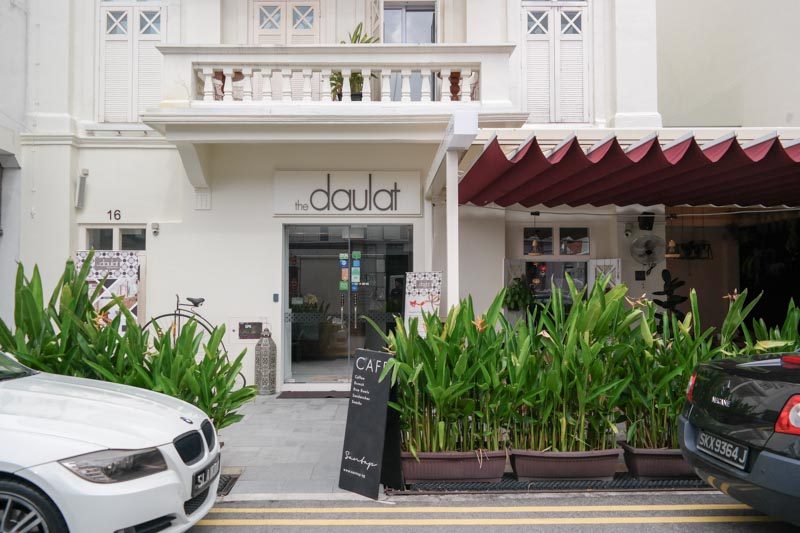 Situated on the first floor of the Daulat Hotel, Santap Cafe is within walking distance from Rochor, Little India and Bugis MRT stations. 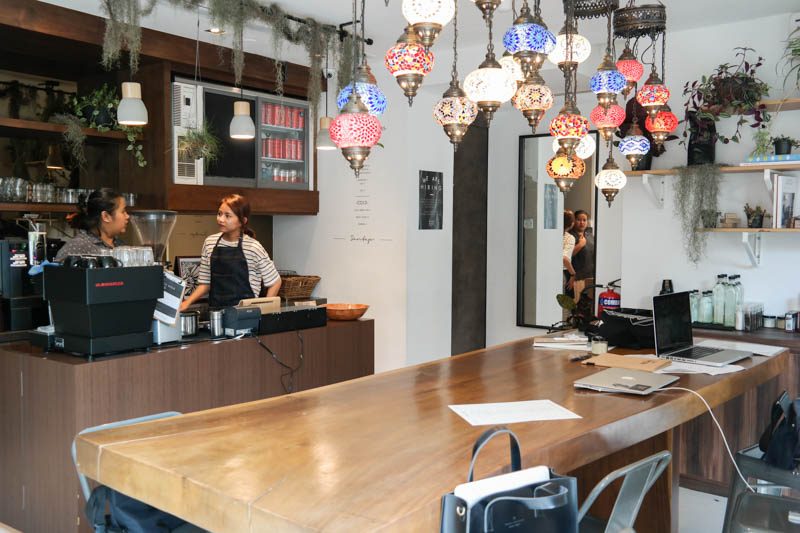 As its space is shared with the hotel, there is limited seating indoors, where a communal table can only seat eight people. 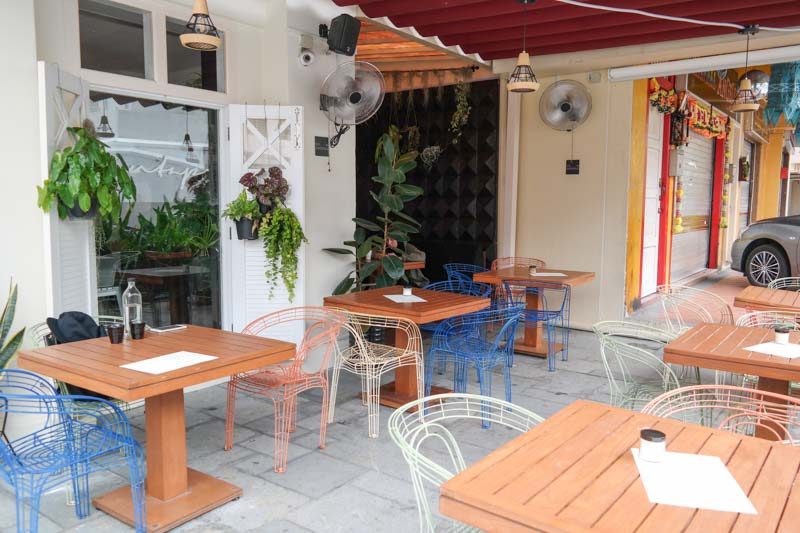 Fret not as there are more seats outside and I prefer the vibes there.

Sipping on a cup of coffee, this airy space will somehow make you feel like you’re transported to a little cafe in Italy. (Especially as you watch foreigners walk in and out of the place). We went with the staff’s recommendation and ordered the Salmon Pizza ($15). Unlike your typical pizzas, this comes with naan as a base.

The pizza came with a generous amount of smoked salmon slices, before being topped off with mild cheddar then drizzled with garlic butter sauce. 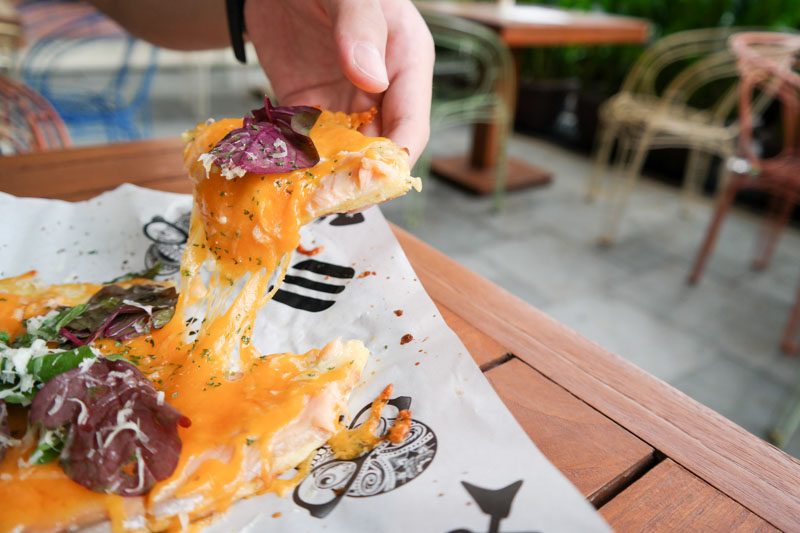 We could not really taste the garlic butter sauce, but still enjoyed the pizza very much as the smoked salmon and cheese were bursting with flavour. It also did not feel as greasy as normal pizzas and would make for a great light lunch option. 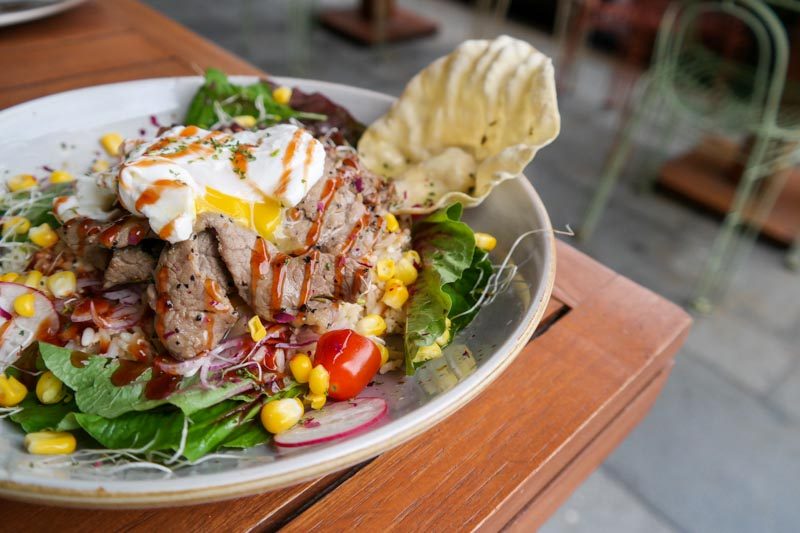 Next, we tried the Beef Rice Bowl ($15), which was hands down my favourite dish of the day. Perfectly cooked slices of beef sat atop fragrant brown rice, served with corn, red onions, cherry tomatoes, a poached egg, that were drizzled with a homemade tonkatsu sauce. 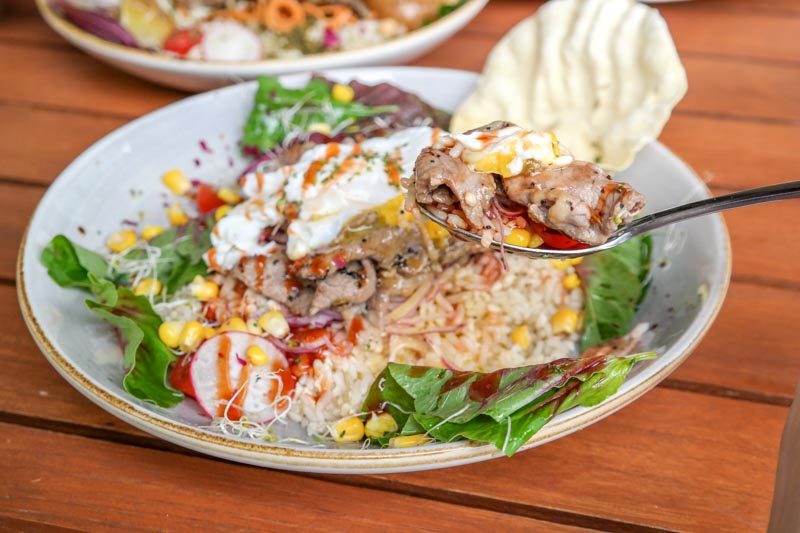 The first bite of this rice bowl took me right to flavour town. The beef slices comprised mainly of lean meat, making it easy to bite into. Every component worked very well together and the tonkatsu sauce lifted the dish with added sweetness.

I would eat this every day if I lived next door, given that it only costs $15 for such a huge bowl of goodness. Being someone who really dislikes lamb, this rice bowl surprised me (in a good way, of course). 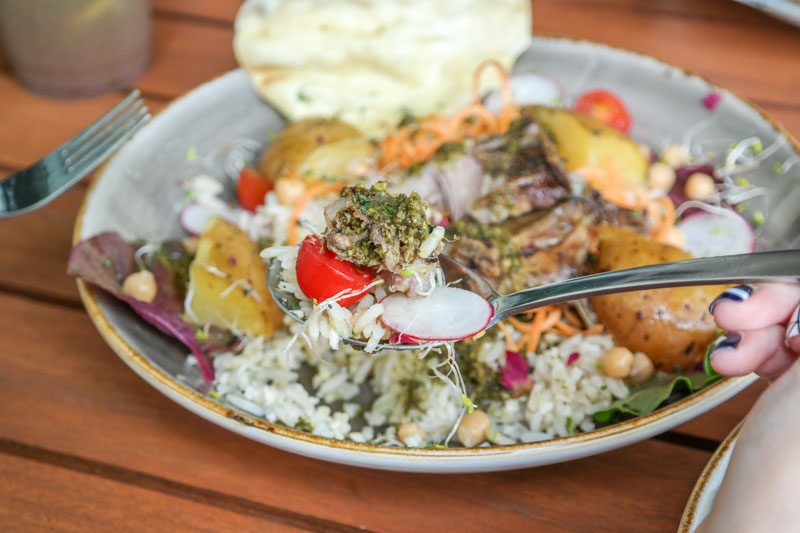 The dish was filled with Indian cuisine-inspired flavours so if you’re someone who loves Indian food like me, you’ll love this. The lamb was tender and did not have any gamey taste at all, and the mint chutney made the dish lighter and more refreshing on the whole.

This rice bowl definitely changed my opinion about lamb meat. 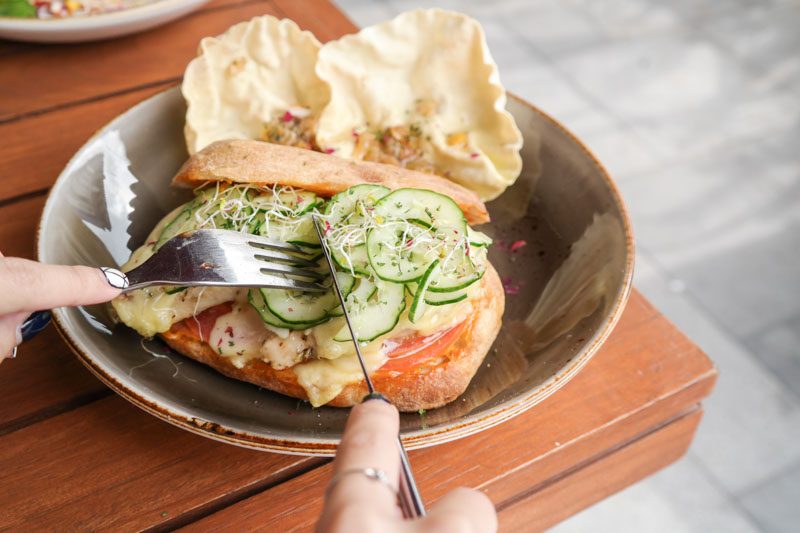 If you’re not that hungry, Santap serves sandwiches too. We tried the Herb Chicken Sandwich ($13) that came with a huge piece of chicken breast, emmental cheese, tomatoes, zucchini and curry mayo sandwiched between freshly toasted ciabatta.

There was also papadum and salsa on the side, but we felt that fries or potato chips would have matched the dish better. 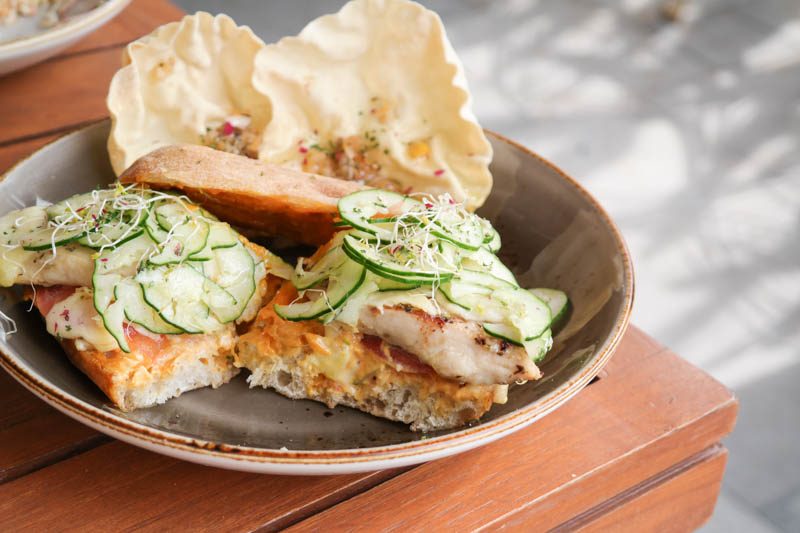 The curry mayo was also fragrant and matched the chicken well, but we would have preferred if the sauce was spread on the meat instead of the bread because the crispy bread turned soggy quickly. 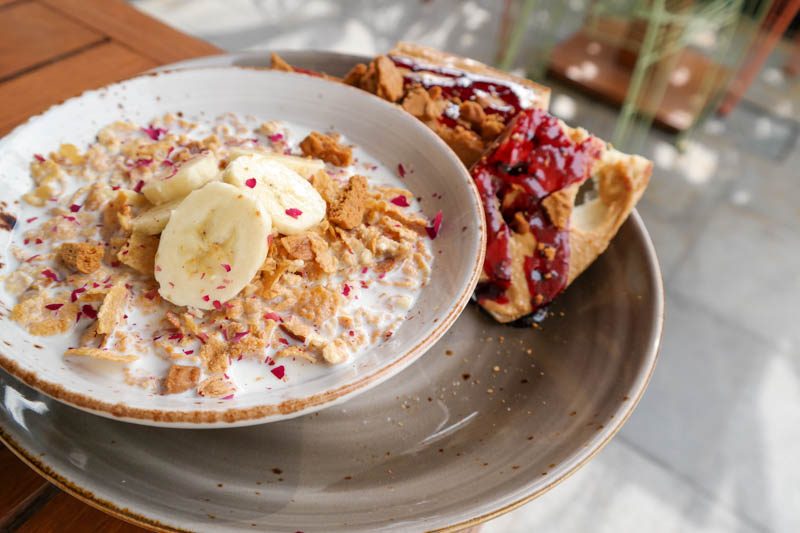 If you’re someone who eats a lot for breakfast, this dish will be right up your alley. The size of the Banana Nut Crunch With PB&J ($10) shocked us when it arrived.

Four slices of crispy bread slathered with peanut butter and blueberry jam were served alongside a mountain of cereal. 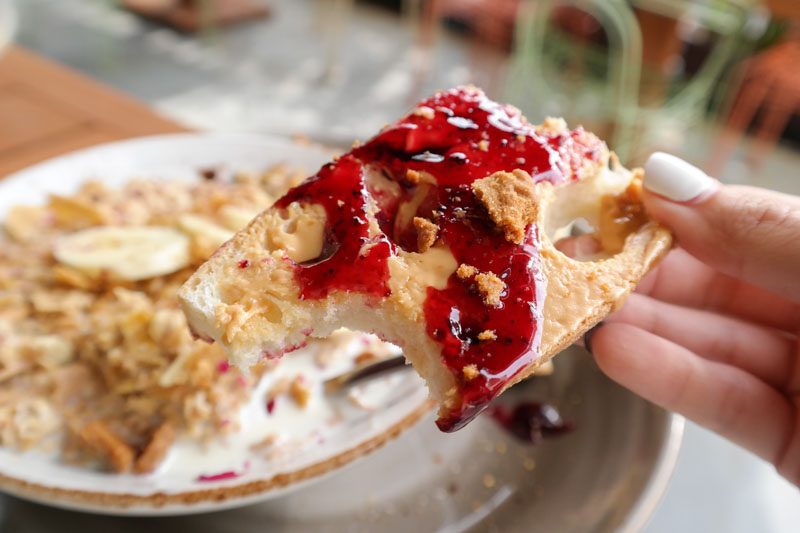 The American classic of PB&J is given a twist by using blueberry jam instead of strawberry jam here and it may be the best idea yet. The sweet, tangy jam balanced the rich peanut butter very well, and I finished two slices at a go. (Even after all the food before that!) 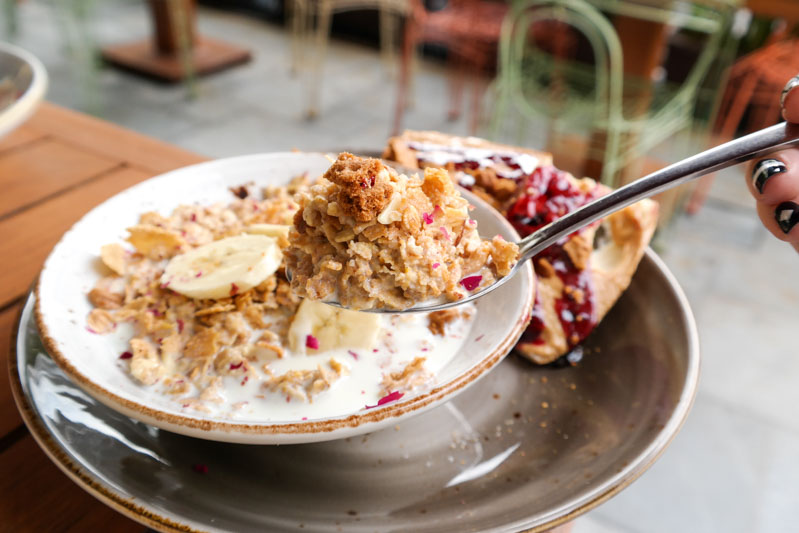 The cereal was topped with fresh banana slices and Lotus caramelised biscuit, further adding flavour and texture to the dish. I would have preferred if they served the milk separately though, as the cereal was already a little soggy by the time it reached our table.

If calories didn’t count, I’d love to have this huge bowl of breakfast every single day.

The food served at Santap Cafe really exceeded my expectations and I was very pleasantly surprised by every dish that I tried there. What’s more, the food served was extremely reasonably priced, unlike many cafes that now sell overpriced and unimpressive food.

Try lots of dishes, then roll over to The Daulat for a room to nap in, like I did.