Singapore Food Festival 2016: Event Highlights To Taste The Past & Future Foods In Singapore

Singapore Food Festival 2016 is happening from 15 – 31 July 2016, and it is packed with a slew of activities not to be missed! We were given a glimpse of what’s to come and I’m already excited to visit the full spectrum of it.

Peel your eyes on exciting fusion food created by Timbre+ chefs and guest chefs – an interesting collaboration between celebrity chefs to explore a taste of what food may be like in Singapore in the future – to a blast from the past at the retro-themed 50 Cents Fest, amongst many other exciting foodie events in July.

Here’s a sneak peek of what you can expect from this year’s Singapore Food Festival 2016, which has a total of 18 events. Start marking down the various dates in your calendar and plan for gatherings with friends and your family to feast your way through the month of July. 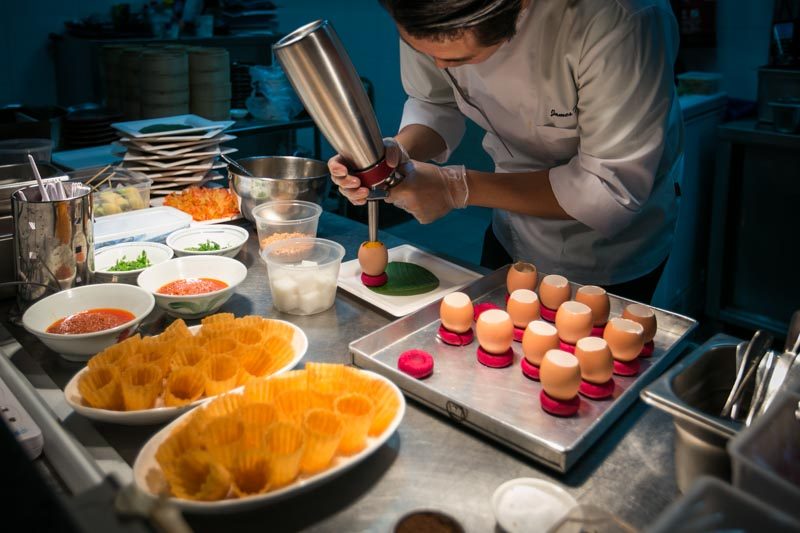 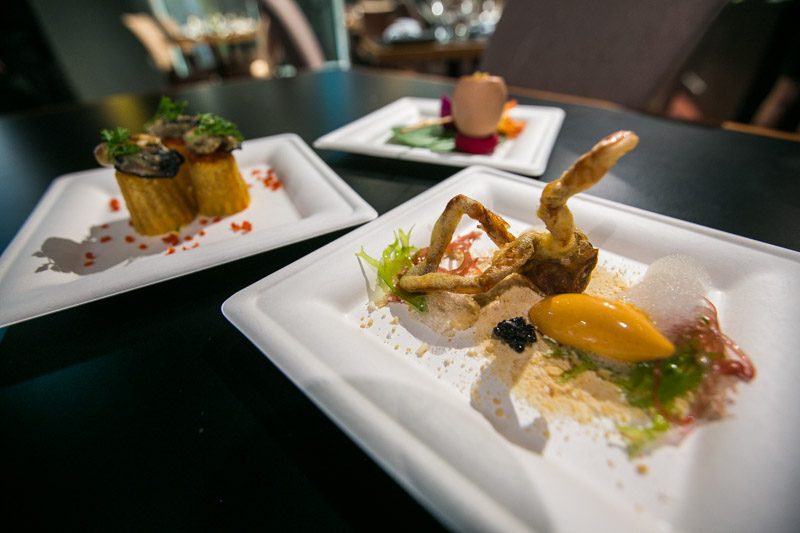 At just $40, guest can indulge in a five-course gastronomical dining experience that will take Singapore’s iconic street food to the next level.

These dishes are mostly inspired by the chefs’ memory of their childhood, which are elevated with more premium ingredients. 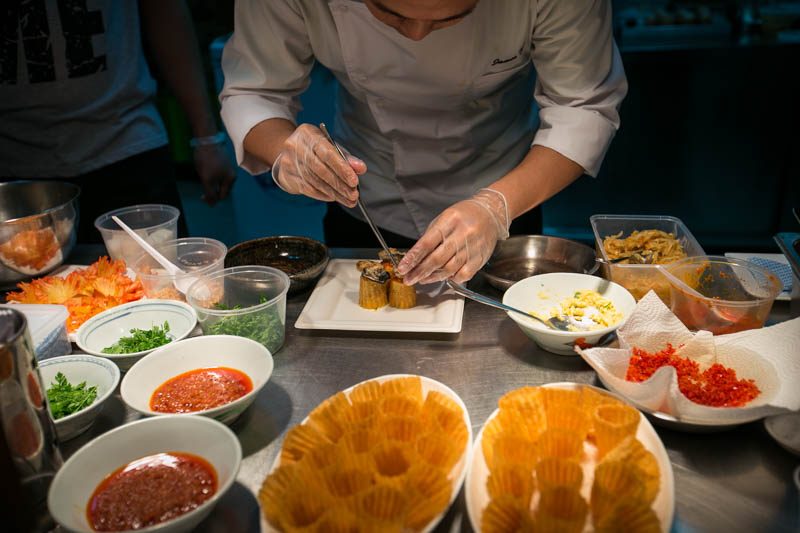 Oyster Omelette Pie Tee by TungLok. An adaptation of a kueh pie tee, the shell is used to represent the crispiness of the starch from the oyster omelette. It is filled with popiah fillings then generously covered with a spoonful of egg cooked in scrambled egg style, and topped with chilli and Irish oysters.

These bite-sized poppers pack a punch of flavours and are amazingly tasty, the Irish oysters are dipped in a little starch before cooking to give a similar texture of a regular hawker centre’s orh-luak. Chilli Crab by Labyrinth. Aesthetically plated to mimic the seaside, the sand is made with tomato crumbs, crab bisque to form the foam made by the waves, decorated with Japanese seaweed that has been washed ashore.

What really stole the show was the cold sauce served as a dollop of ice cream, which was refreshing and tasted exactly like sweet concentrated frozen chili crab sauce – mix it all up and the taste of chili crab is replicated in your mouth although via an alternate cooking method. An interesting twist to the traditional dish indeed. 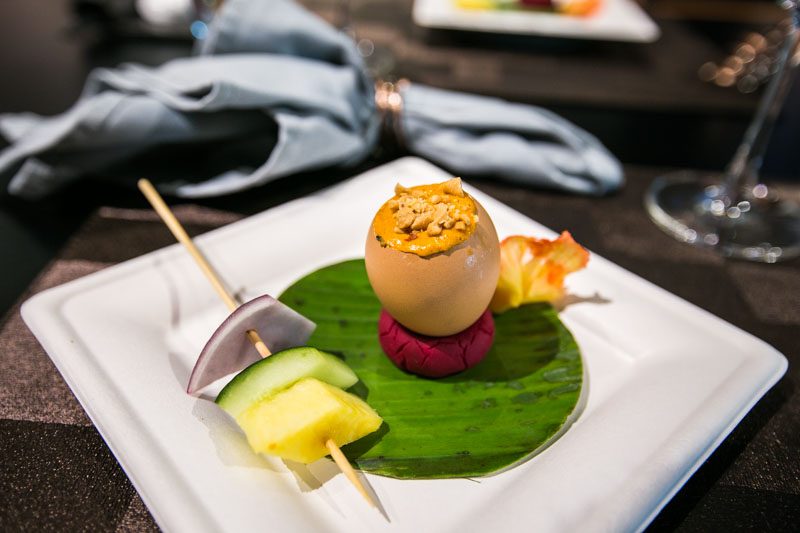 Singapore Satay by Chef Susur Lee. No stranger to the food scene in Singapore, international celebrity chef Susur puts a spin on satay by placing diced ketupat and chicken into an empty egg shell before covering them in a rich, creamy peanut sauce.

Unlike the satay that we are oh so familiar with, the sliced onion, cucumber and pineapple are now skewered together and given a spotlight in this dish.

12 other stalls from restaurants like Candlenut, The Disgruntled Chef, and many others will also be participating in STREAT this year. Prices of dish or food varies. Open Stove will see resident chefs from Timbre+ in collaboration with invited chefs from some of your favourite restaurants, where they will fuse their signature dishes together to create out- of- this- world tastes. 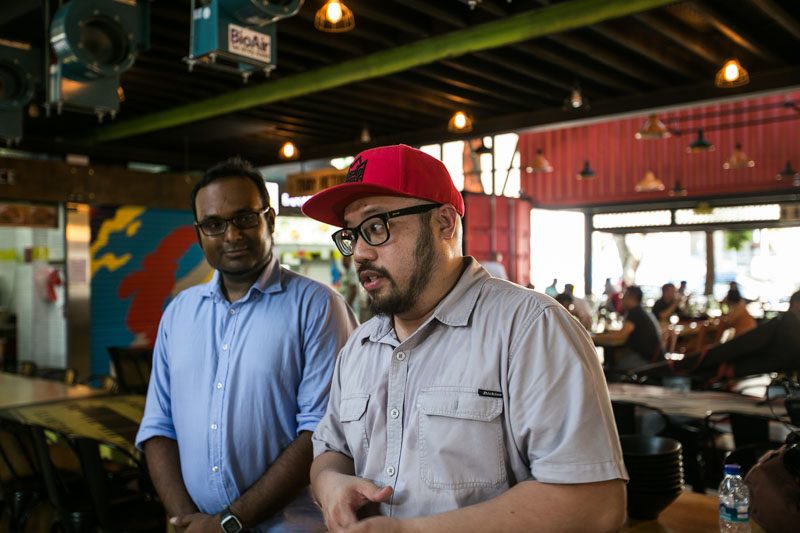 One of such collaboration is chef Christian Calledo of Iskina Cebu Singapore, joining forces with chef Bjorn Shen of Artichoke and Bird Bird. 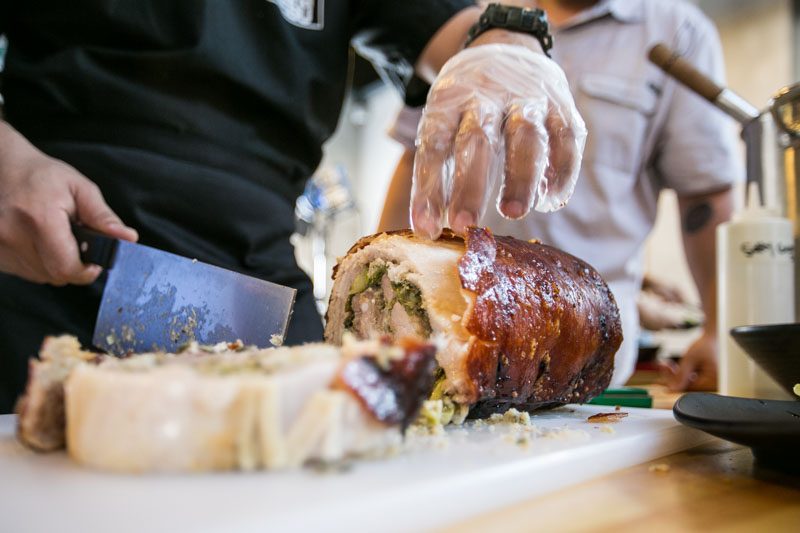 Cebu BellyChon, Curry Noodles with Salted Vegetables and Lime. A delicious medley of flavours from chef Christian Calledo’s slow roasting of the pork belly infused in herbs and spices, along with chef Bjorn Shen’s laksa-inspired thin noodles, which he hated at first then grew to love while living abroad. If it wasn’t for my limited stomach space, I would have slurped up three entire bowls by myself, down to the very last drop of soup. While the broth was laksa-inspired, it tasted like a marriage between mee siam and curry.

What’s amazing is that the bellychon did not cause the broth to be saltier, but instead, made it more fragrant with its infused herb flavours.

Catch other innovative collaborations by chefs Jeremy Cheok of Dusk by Slake and Tan Huang Min of Park Bench Deli; Alexandar Chong of Garçons, Teppei Tamashita of Teppei Daidokoro, and many more.

Bask in activities that are running concurrently at Timbre+, such as live cooking demonstrations, pop-up outdoor BBQ kitchens, neon beer pong, and games for ages five to 95 that you can enjoy with your family. 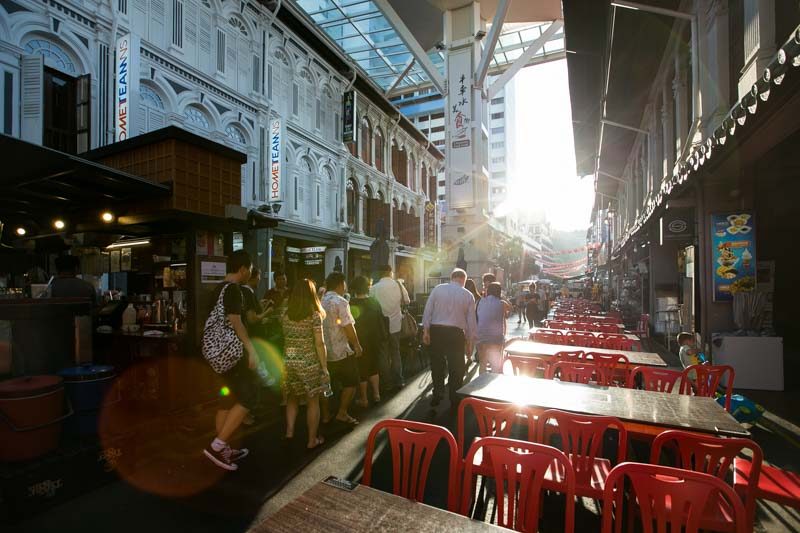 Get transported back in time to when hawker fares were sold at only $0.50 during your parents and grandparents’ era.

Held within the humdrum of Chinatown Food Street, patrons will experience the life of a “pasar”, and try out more than 30 dishes in sample portions, which cost from $0.50 to $2. You may view the full list of food items and its pricings, here. 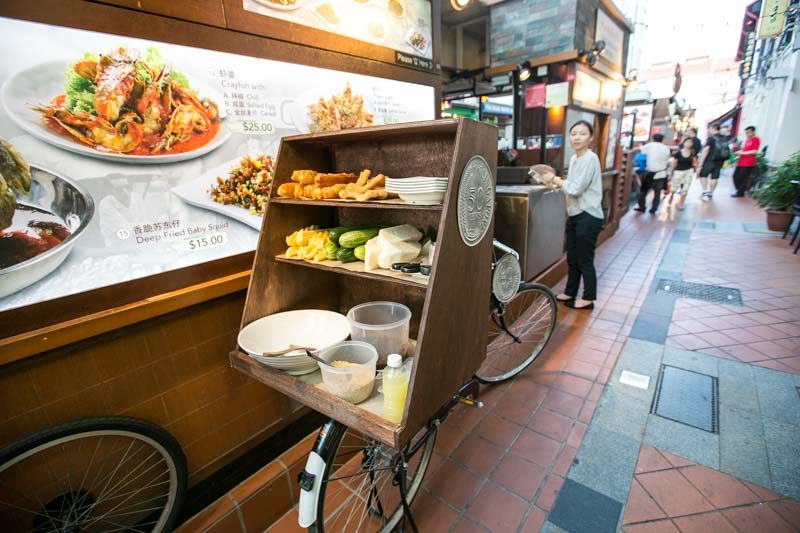 Rojak on Wheels ($0.50). Ever ordered a plate of rojak from the back of a bicycle? That’s exactly what a rojak stall would look like in the 1950s and 60s, the hawker could easily sell it anywhere he likes. 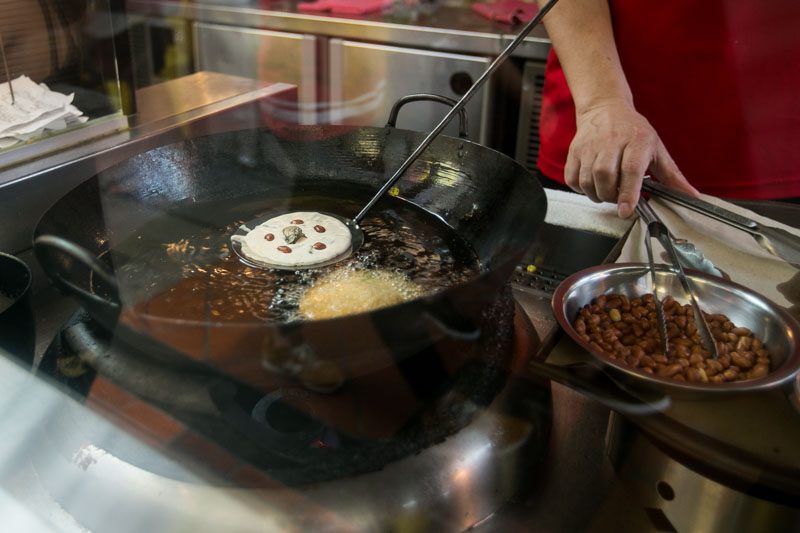 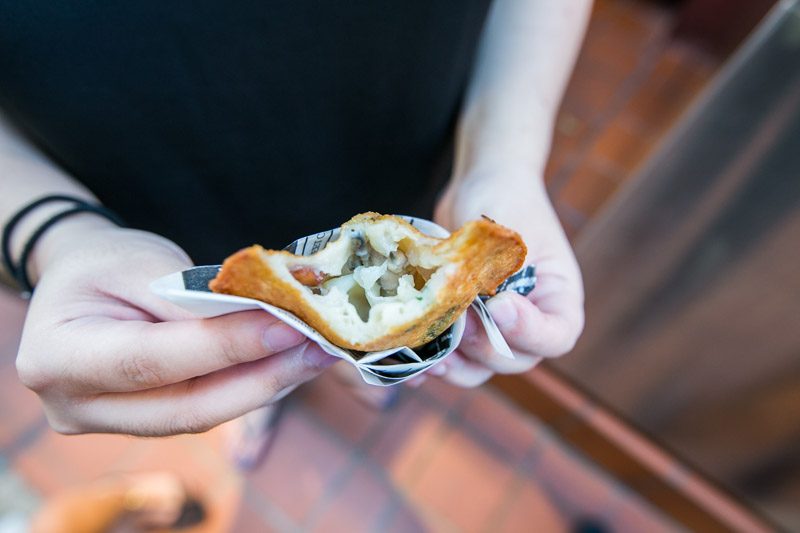 UFO (Fried Oyster Cake) ($0.50). The UFO gets its name from its shape, and it’s laced with peanuts and an oyster in the middle – a favourite snack of my grandmother. The 50 Cents Fest! is a great opportunity to bond over foods of yesteryears with your loved ones as they reminisce the past. 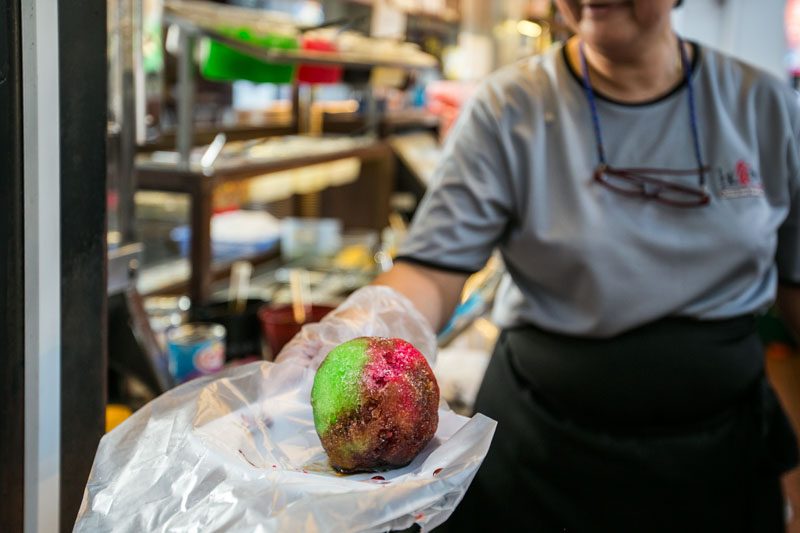 Ice Ball ($0.50). A once popular street snack amongst kids to cool off the heat, the ice ball is best eaten with your bare hands until it’s reduced into a melted mess.

The kids would then usually throw the remaining ice at one another, you could do that do if you’re feeling cheeky, just don’t get the passers-by involved in a food fight. 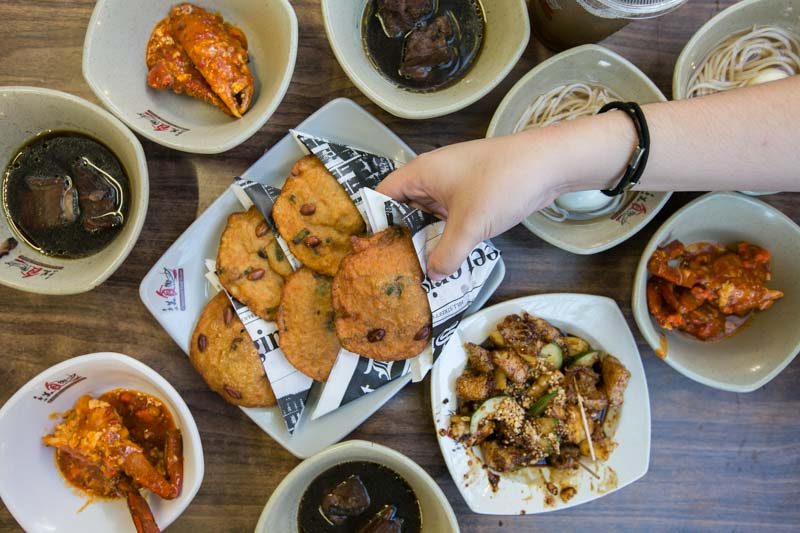 Other nostalgic dishes that are rarely seen these days are the traditional Hokkien Bak Kut Teh ($1) that is darker in colour and boiled in medicinal herbs, Kok Kok Mee ($0.50), Sweet Noodles ($.050) which consist of a hard-boiled egg and egg noodles drenched in sweet broth, and many more items to rekindle the good ole’ days.

Read more about the list of dishes that are available at the 50 Cents Fest.

A total of 18 culinary events are lined up for Singapore Food Festival 2016 all around Singapore, from learning how to cook Singapore Chilli Crab, to dining in the garden city, there something for every hungry soul.

Take your best flatlay image of your favourite SFF dishes and share it on Instagram with the hashtags #SFFflatlay & #SingaporeFoodFestival and tag @Visit_Singapore to win delicious prizes! Full T&Cs here:  http://bit.ly/29MRBLw

Previous articleBarrio by Mex-Out: Eat, Drink and Hang Out At This Cozy Mexican Joint
Next articleKFC’s New Umakara Chicken Will Shoyu A Whole New World – Taste The Umami!