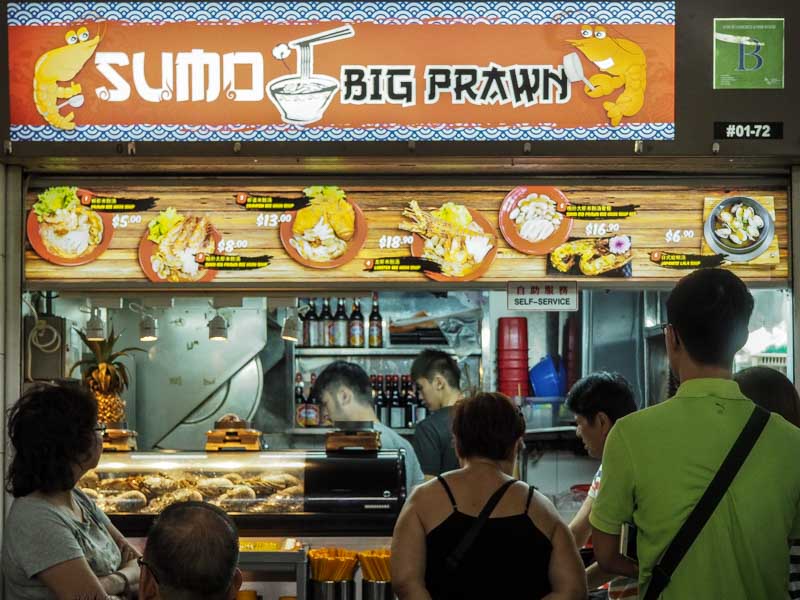 Souper big bowl of prawn noodle that will leave you belly happy.

Opened in September 2016 within a hawker center at Blk 628 Ang Mo Kio Avenue 4, Sumo Big Prawn Noodle has been the talk of the heartlands, serving prawn noodles and the unthinkable – Lobster Bee Hoon Soup. 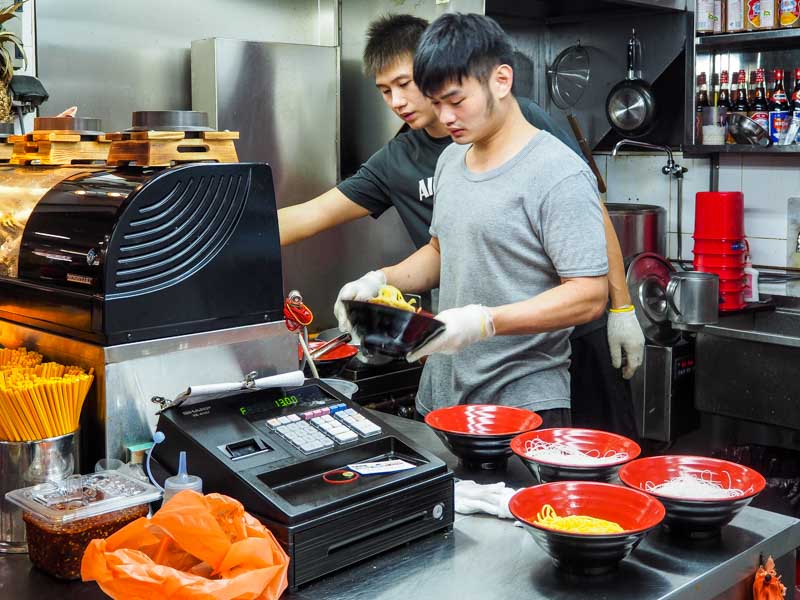 Armed with curiosity, I went down at 9 AM on a Tuesday morning, hoping to skip the crowd as well. Already, there was a queue of six eager-looking customers before me.

Manning the stall is the stall owner Chef Desmond with his business partner, Jeffrey, and Desmond’s mother who takes order and serves the food. Desmond’s wife comes by to help as the business gets busier about an hour later.

Desmond has worked in the same hawker centre before, but cooking in another stall selling Hokkien Mee. This place is like his second home and only recently he made the jump, switching to serving prawn noodles, hence starting his own business.

All three of them are clearly busy with the influx of customers but Desmond is kind enough to share a glimpse of their daily operations in Sumo’s stall, even allowing me a tour of their tiny kitchen. 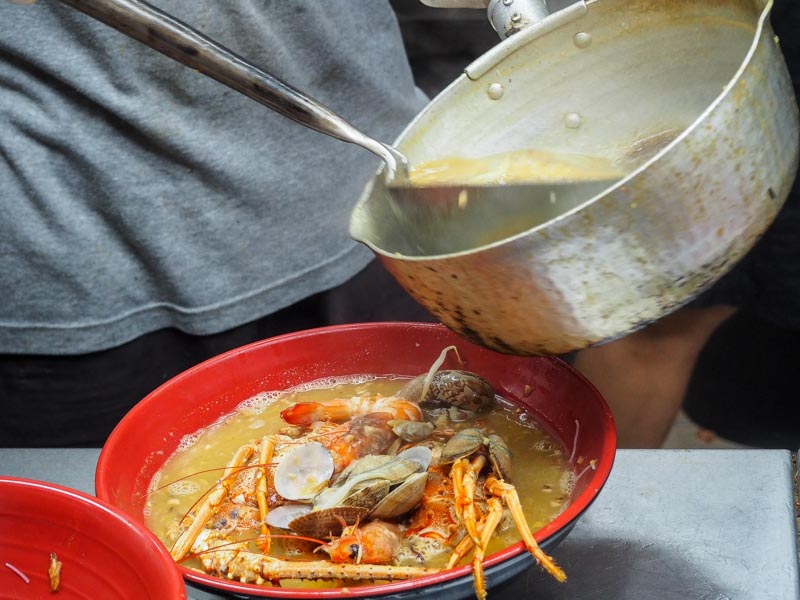 Within the confined boundaries of the kitchen, Desmond segregates the area into three for the cooking of the noodle, ingredient and soup respectively.

It is almost a routine to him as I watched him juggled between boiling the soup, blanching the noodle and cooking the ingredients all in different pots at the same time with skill.

He also reveals that their broth has no MSG and is boiled with lots of prawn shells and pork ribs to achieve this deep red color.

True to their pursuit for quality, the lobsters are kept in these $3000 chiller displays. Bought at a staggering price, Desmond simply shrugged it off as he firmly believes in the importance of keeping his lobsters chilled and fresh. 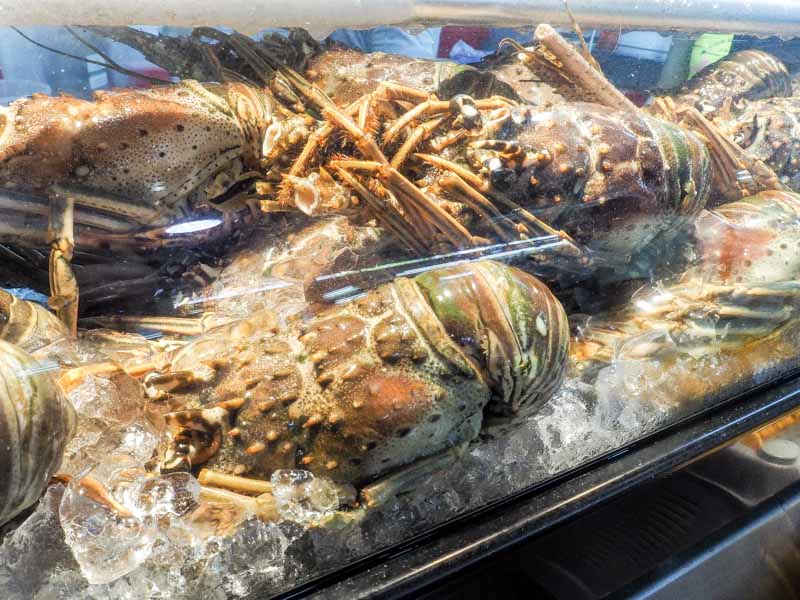 The lobsters are even supplied to their stall twice daily, in the morning and afternoon. They take care to ensure the lobsters are all sold out by closing time so that none will be left overnight, which will compromise on the freshness.

At the time of my visit on 11 October 2016, I was informed that their Asia lobsters are currently unavailable as they are not in season. The usual price of the Asian lobster bee hoon soup is $18.90. However, Desmond is able to get supplies for the Columbia lobsters as a temporary replacement for about a month. 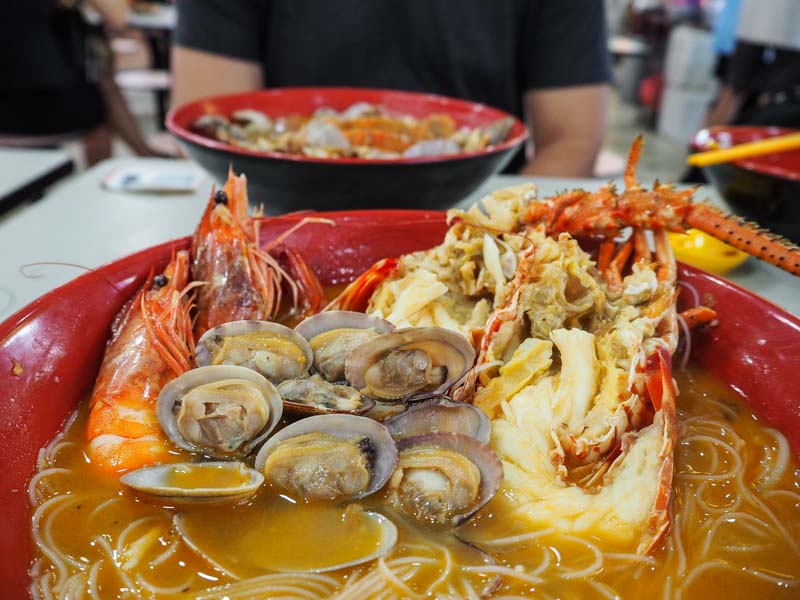 The Lobster Bee Hoon Soup ($24.90, usual $18.90) surprises me with its large red bowl filled with crustaceans and bee hoon. There are two large prawns that taste sweet, a handful of plump juicy clams and one huge lobster weighing about 300-350grams. The meat is tender and best savoured before it turns cold.

As for the broth, it is milder than what I have envisaged it to be. Unlike the usual strong prawn taste, Sumo’s version is lighter with a tinge of sweetness. It is flavourful yet not so rich to knock you off. That makes the soup easier to drink without getting jelat after a few mouthful. 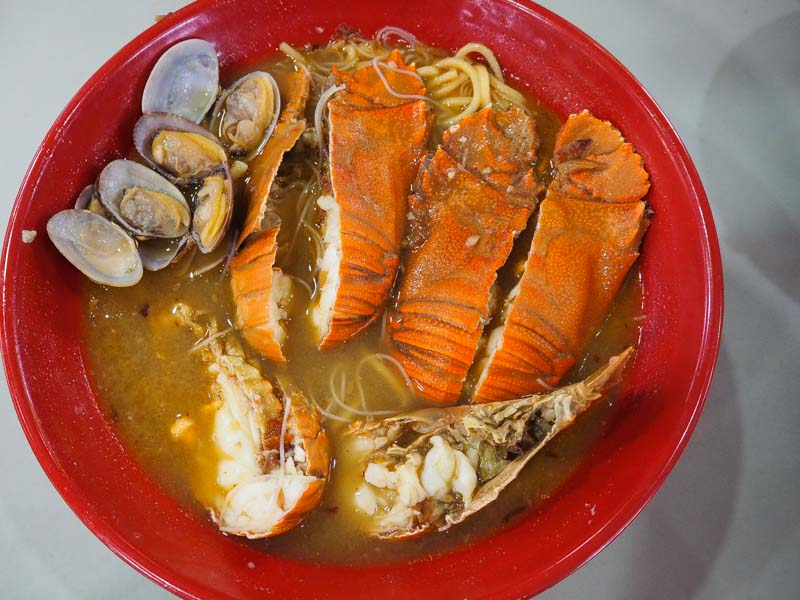 The Crayfish Bee Hoon Soup ($13) is seriously a steal loaded with three whole crayfishes and clams. The generosity in the ingredient definitely makes your money worthwhile. This is another dish I would personally recommend that cost slightly over ten bucks yet you get to savour quality ingredient. 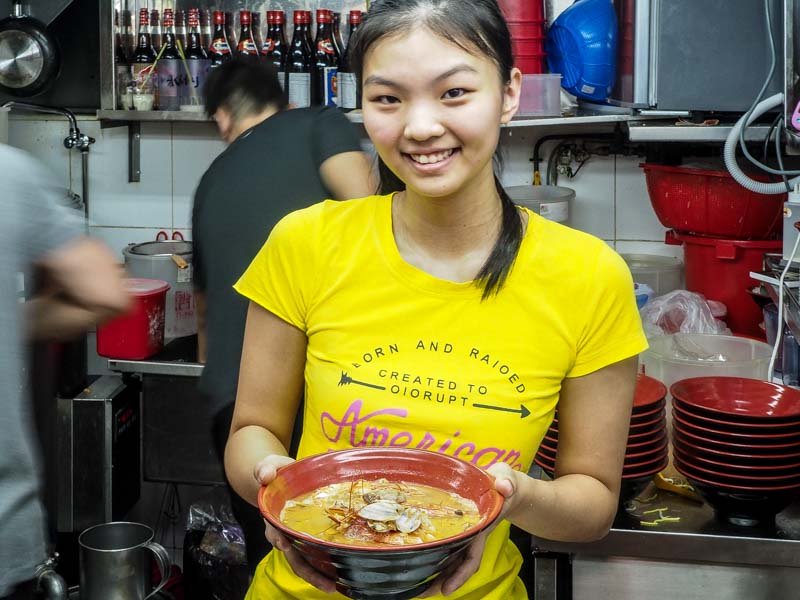 To be honest, I was rather surprised and touched by the consideration behind every detail they have invested in Sumo Big Prawn Noodle. Sourcing, storing and selling the lobsters are certainly not an easy task serving out of a hawker stall.

It is a risky and daring decision to make, in being one-of-a-kind and probably the first to introduce a known delicacy into the local hawker scene. Sumo broke the misconception that lobsters must be sold expensive and only in restaurants.

As I walked around and observed, I see Singaporeans from all walks of life having the lobster bee hoon soup. Back in those days when eating lobsters are unthinkable for the majority population, Sumo Prawn Noodle Soup has made it possible for the masses.

Previous articleBlind Taste Test: We Tasted 14 Potato Chip Brands In Singapore, The Results Will Have You Questioning Your Favourite Brand
Next article8 Cafes With Extra $10 Off When You Book Through Chope And Pay With Visa 10 Teppanyaki Restaurants In Singapore For An Interactive Dining Experience