“Casual Korean-fusion in the West” 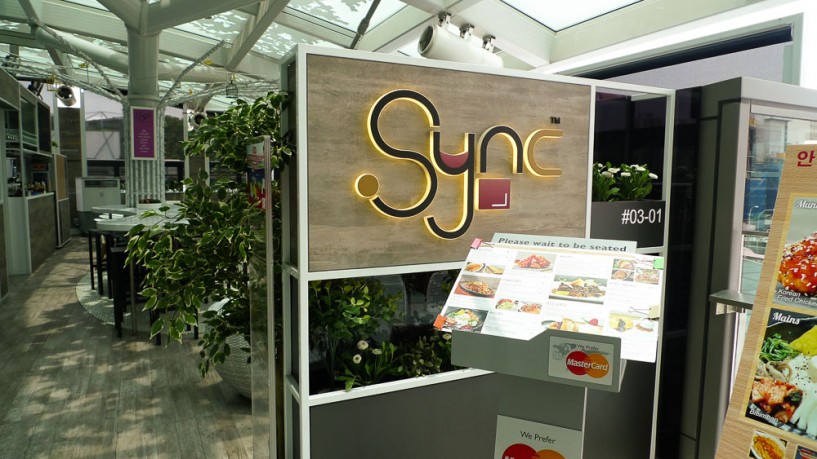 Although located in Westgate – the “Orchard” of the west part of Singapore, Sync Bistro can be quite a challenge to locate. Westgate shopping mall is divided into 2 shopping areas- air conditioned and the more eco-friendly open air area. Head to the open air area and look for the Samsung outlet, Sync Bistro is located right above Samsung on the third floor. 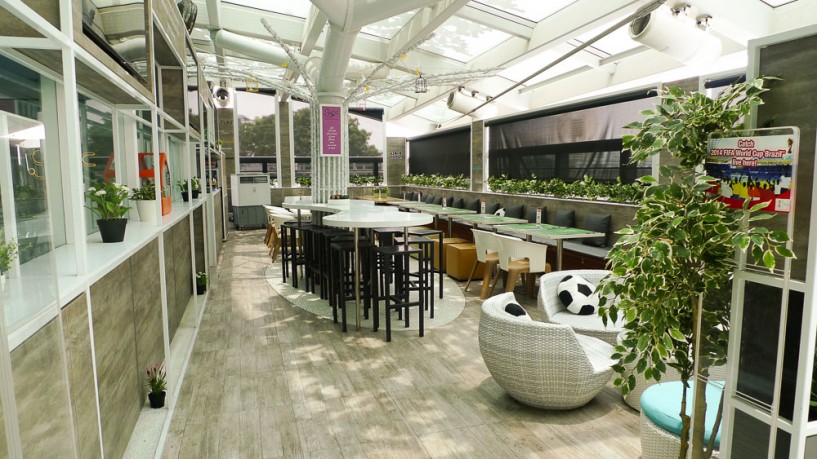 Like the mall itself, SYNC Bistro is also divided into 2 main seating areas, an indoor and outdoor al fresco area. We visited on a lovely sunny afternoon and opted for the air-conditioned seating. We spotted some LCD TVs that screen soccer matches at the outdoor seating area, so soccer enthusiasts you might want to add this place to your next gathering. The indoor restaurant area is cosy with warm lighting and simple, modern designs as well as housing the bar and kitchen. If you’re a Samsung fan, you’ll be happy to know that Sync Korean Fusion Bistro is powered by Samsung products – meaning that other than the usual static menu, you’ll be presented a Samsung Tablet that allows you to order through the interactive menu yourself.

There’s also Samsung corner where you can experience the latest Samsung technology and charge your gadget(s). Sync bistro originally started with the tablet menu, but after feedback from customers, a hardcopy version is also available for the traditional diners. For diners with kids, you’ll be happy to know that there is also a kids corner where the little ones can keep themselves entertained with some digital games.

But enough about the gadgets here, let’s dive into the food menu that’s a fusion of Korean dishes with western influences. 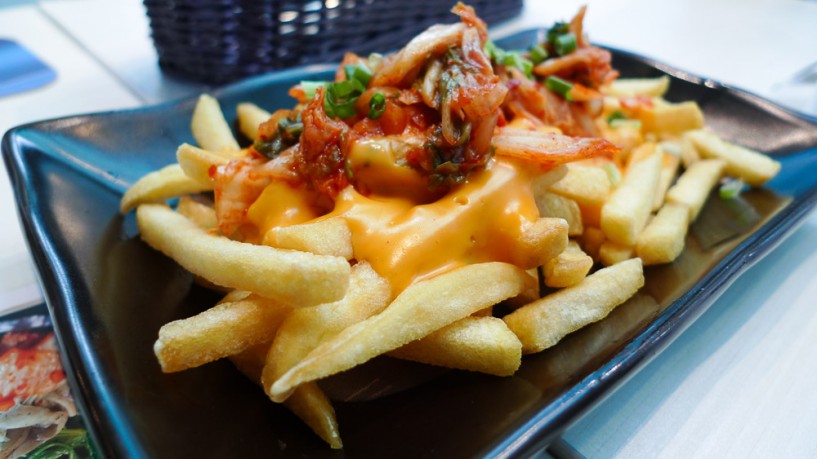 Gamja Tukim ($6.90). Kimchi cheese fries! I must admit that I’m not a big fan of kimchi but this dish and combination surprisingly works. The kimchi is a mixture of sourness and spiciness while the cheese sauce complement the flavours from the kimchi perfectly. It’s a different version of the chilli cheese fries and I think I might actually like this better than the usual chilli cheese fries. 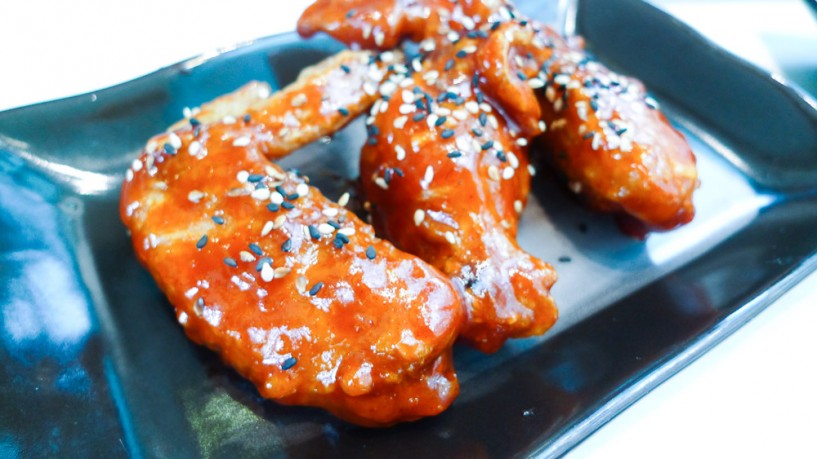 Yangnyeom Tong Dak ($6.90). Fried chicken in spicy Korean yangnyeom sauce. Cooked upon order, chicken was served hot and crispy. The sauce was a blend of sweetness and spiciness but more spicy than sweet. The sesame seeds gave the otherwise normal dish, extra fragrance. 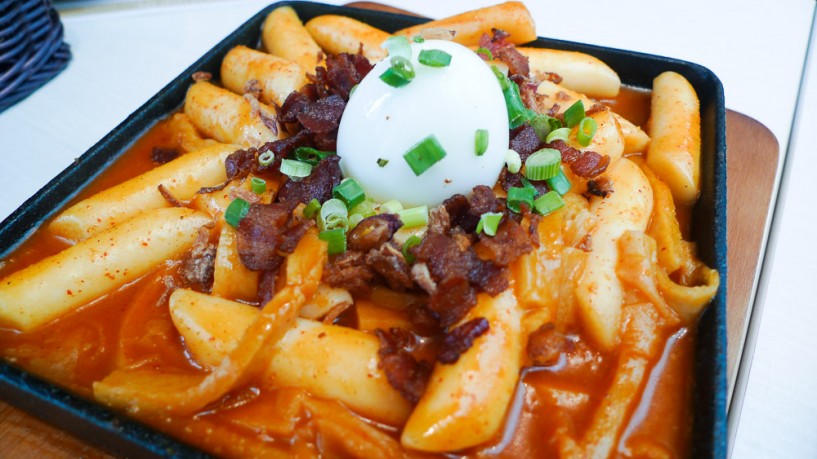 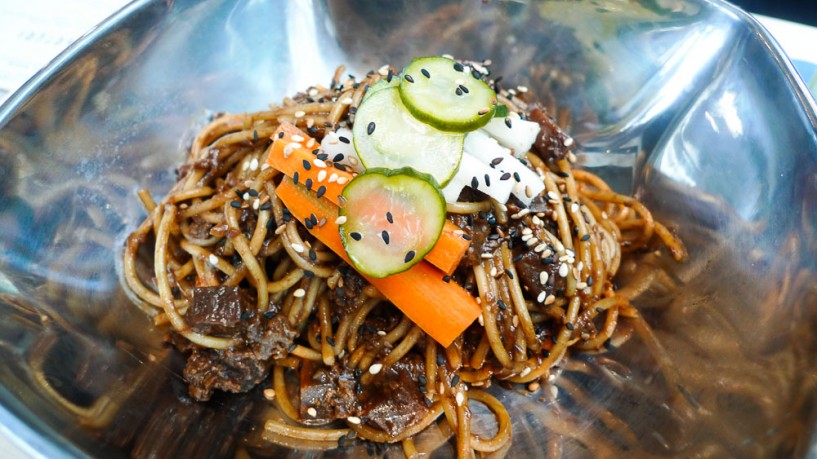 Ja Jang Myeon ($12.90). Unlike the usual ja ja myeon most of us have tried, the noodle used here is spaghetti. So in terms of noodle texture, this version is somewhat thinner and firmer which pasta lovers will enjoy this. The overall taste of this dish is sweet, evidently brought about by the black bean sauce. 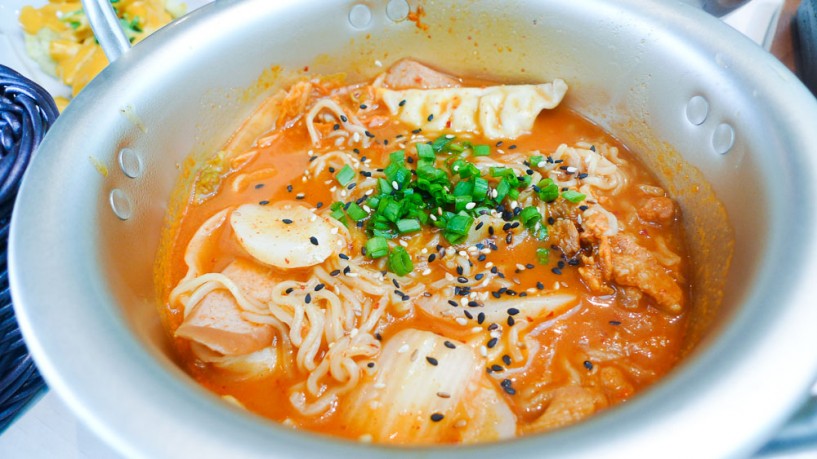 K Stew ($14.90). Otherwise known as the army stew (Budae Jjigae), history has it that after the Korean war, food was scarce and some people began incorporating surplus foods like hotdogs from US Forces into a traditional spicy soup flavoured with gochujang (red chilli paste) and kimchi.

Sync’s version included pork belly, rice cake, gyoza, hotdog and cabbage. The stew itself was delicious – thicker and more concentrated than usual, although on the spicier side, pork belly was tender. I believed we polished the entire bowl. 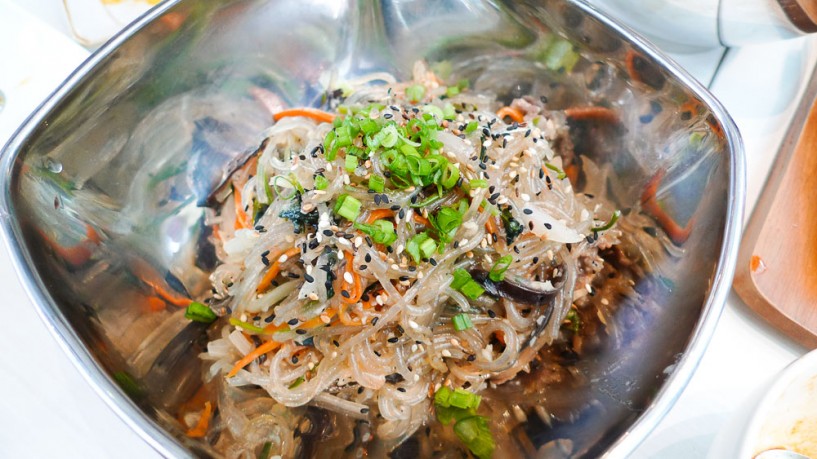 Jap Chae ($11.90). Served in a silver bowl, we were surprised to find out that its served warm instead of the usual cold ones that we have had. The sweet potato noodles is stir fried with seasonal vegetables in Sync bistro’s own special sweet savoury sauce. Sesame oil was also added to give it that extra fragrant.

This dish is slightly sweet and although tasty, we still prefer our jap chae served cold. The option of adding meat is available with additional charges. 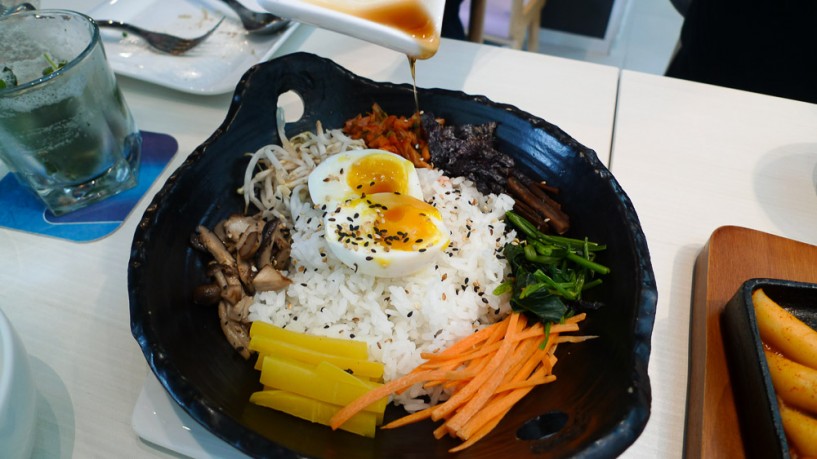 Bibimbap ($12.90). Toss together rice, seasonal fresh vegetables, soft boiled egg, gochujang and sesame oil and you might have made yourself Sync’s version of the bibimbap. This rice base dish is not served in your usual hot stone bowl though.

With all that is added into the dish and after a good mix, the rice dish is fragrant and slightly sour and although the ingredients were generous, we would have preferred our vegetables julienned thinner for a crunchier texture. 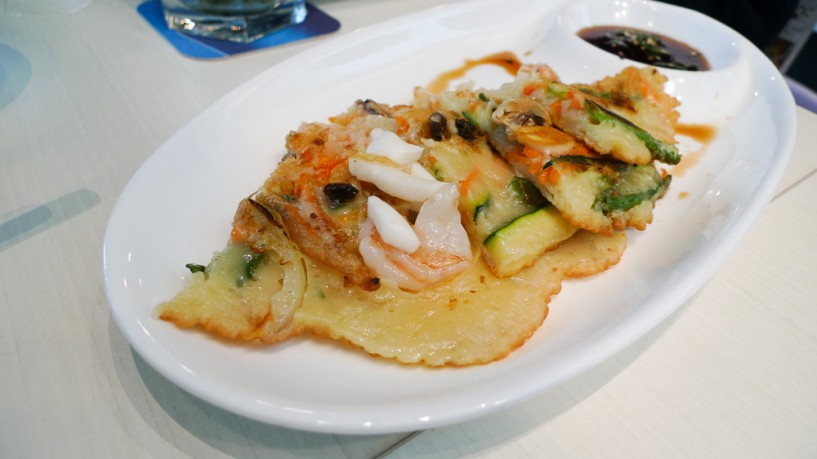 Pajeon ($7.90). We had our pajeon (Koean Pancake) with seafood and the dish was what I would describe as interesting. The pancake somewhat resembled our local ‘orh-jian’ with its starchy texture. The accompanying soy dip was nice and gave the pajeon added flavours. We would have liked it better if the seafood was well spread out among the batter rather than just being in one area. Hotteok ($9.90). Cinnamon and nuts encrusted in a chewy pancake like shell, this warm dish will be a hit with sweet lovers. The chewy pancake reminded us of a chewy, nuttier and less oily churros. The combination of warm pancake and cold ice cream hits the spot everytime.

Both the pancake and ice cream sits on top a black sesame chantilly, adding extra fragrant and nutty flavour. I thought there was a bit too much dominating flavours going on though, like red bean, cinnamon and sesame with their distinct taste which might not be complimentary. 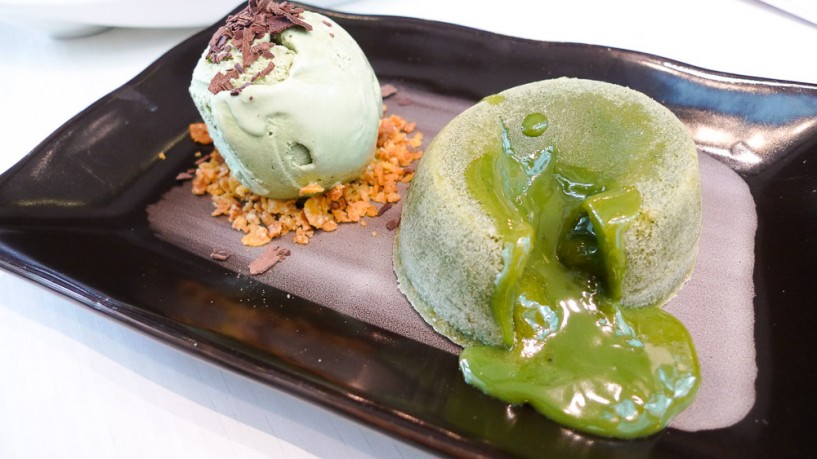 Matcha Lava Cake ($7.90). Up to this point, trust me when I say that we’re full to the brim. However, looking at the lava cake, I don’t think anybody would reject a bite of it. Once broken, matcha lava ooze out of its cake shell. Well baked and not too sweet, again the combination of hot and cold never goes wrong. The matcha flavour was intense and I loved every bite of it.

For the yam lovers, you’ll be glad to know that they also serve a yam version of the lava cake and it tastes like “orh-ni”, which is an Asian favorite as well. 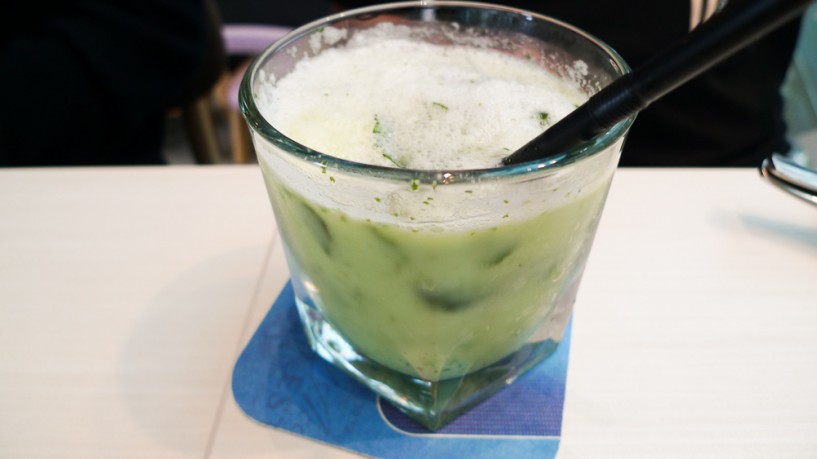 Soju Mojito ($9.90). Aside from food and desserts, SYNC also boost a very interesting alcohol menu. The mojito is served looking slightly cloudy because instead of lime juice, they used lime sorbet. Mojito lovers should give this a try!

Sync Korean Fusion Bistro attempts to bring an interesting take on traditional Korean dishes, with fusion elements such as bacon and eggs. The basic Korean taste is present all around, with my favorites being the thick K stew (Budae Jjigae), and the Matcha lava cake. The portions are also considered generous given its pricing and worth a try if you’re in the area for some casual dining.