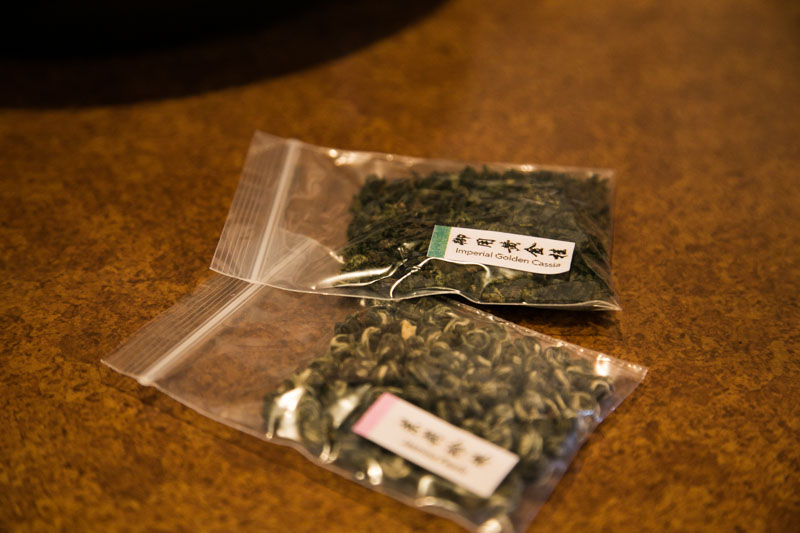 It seems to be the norm to pay more attention to English teas than Chinese teas. It’s always Earl Grey, English Breakfast, Chamomile, etc. It’s rare to hear someone talk about Pu-erh, Silver Needle or Tie Guan Yin, and I think it’s time for a change.

We should shift a bit of our focus to Chinese teas and start appreciating them, before it becomes a lost art. And what better way to start than to attend Tea Chapter’s Chinese Tea Appreciation Workshop, where you get to learn from highly skilled and knowledgeable staff.

We’re talking about all aspects of Chinese tea – the history, brewing techniques, the different types of tea and so on. Besides, it makes for a great couple activity! 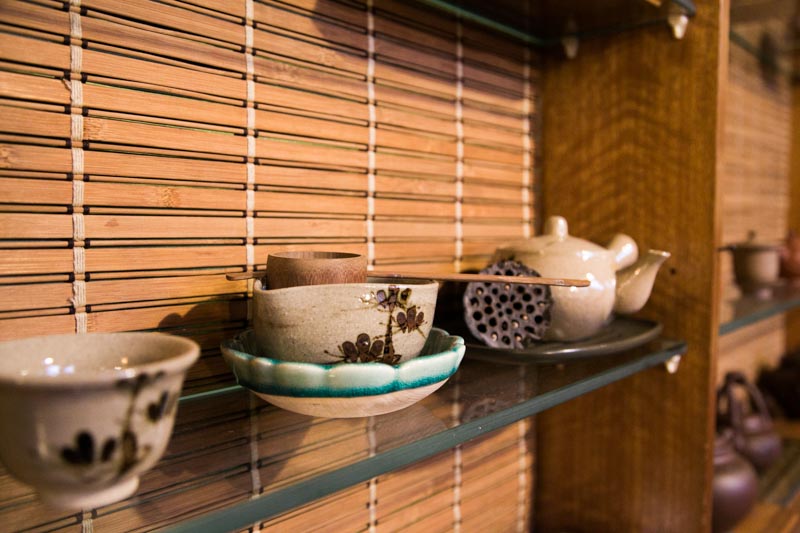 Located along Neil Road, you’ll catch an aromatic whiff of herbal tea eggs before spotting Tea Chapter. On the first level you’ll find the retail stall, where you can purchase any of your favourite Chinese teas, porcelain tea pots and many other tea-related items. 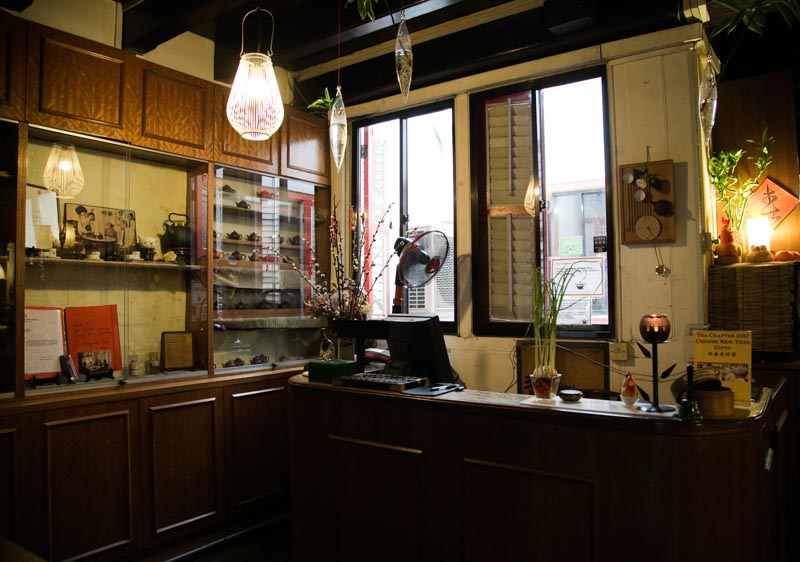 Make your way up the stairs and you’ll be greeted by traditional decor and wood furnishings, providing a respite from the hustle and bustle of the Tanjong Pagar vicinity. 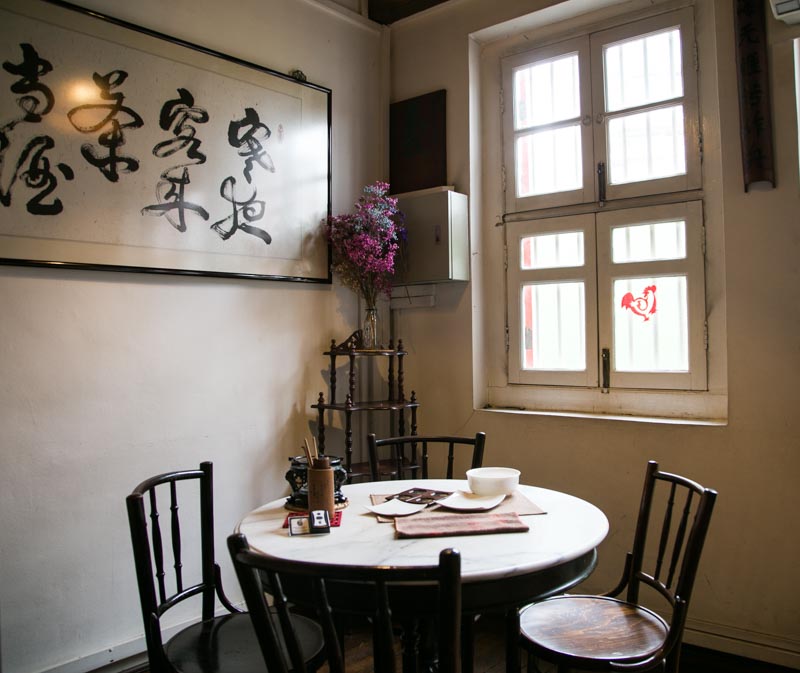 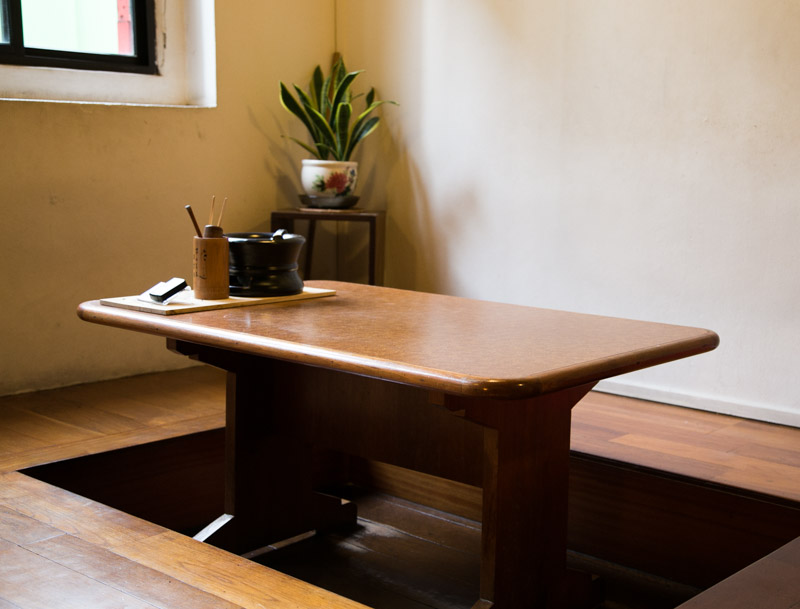 The second level is split into two sections, with one side being a more Chinese-style layout and the other, heavy with Korean influences. 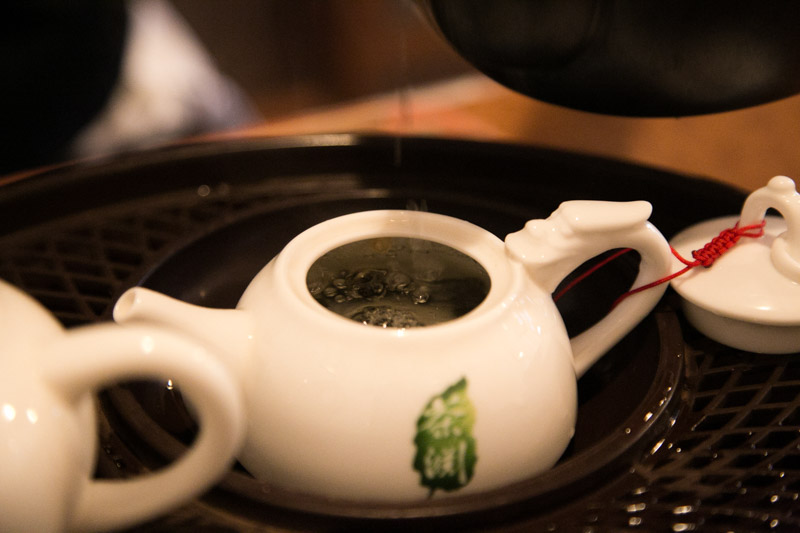 The Chinese Tea Appreciation Workshop starts at $35 per person and a minimum of two people is required per session. It touches on the seven different types of teas: green, white, yellow, red, black, blue and floral.

Tea connoisseurs will educate you on the different fragrances and aromas first, before teaching you how to brew and appreciate the various teas accordingly.

We were pretty excited for the workshop and it started with a comprehensive run through of the history of Chinese Tea, from the legends to the evolution of the different tea drinking methods. 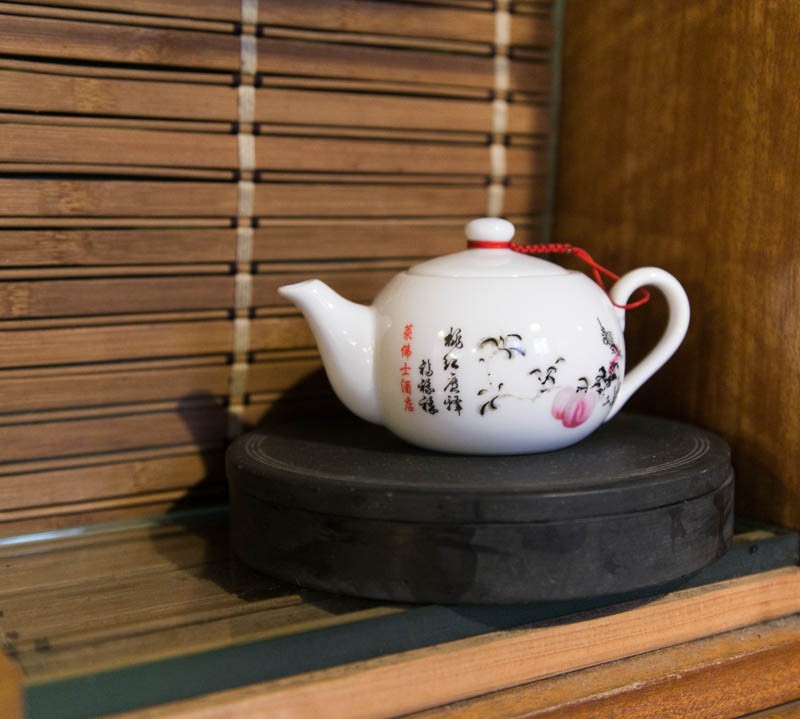 The staff that attended to us were very enthusiastic and passionate about Chinese teas, educating us on what it meant to the common folk then and now.

Chinese tea was exceedingly popular with poets back in ancient China, and served as an alternative to alcohol for inspiration. They needed something they could get ‘high’ on without compromising on the quality of their poems, and Chinese tea allowed them to achieve some form of zen. 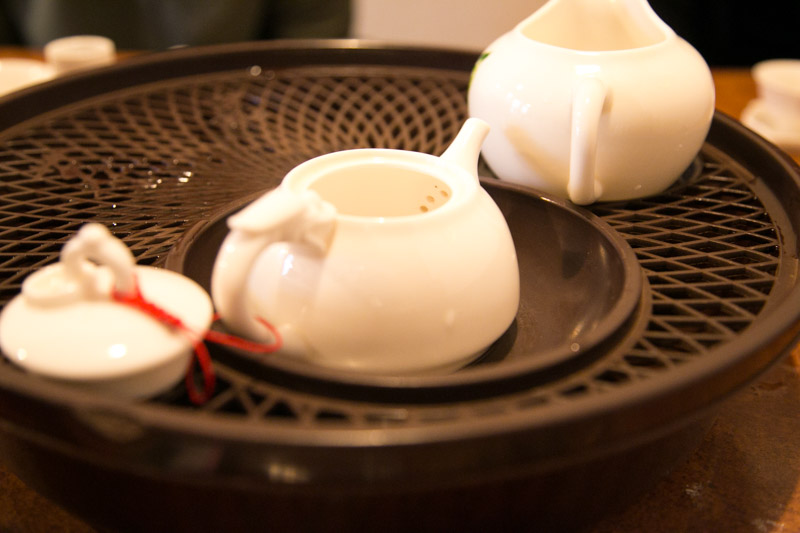 As Chinese tea increased in popularity, the ways in which they were consumed constantly evolved and at some point, teas were ground into powdered form and prepared in the same way as matcha. And no, the Chinese did not steal it from the Japanese, it was simply a case of the Japanese adapting the methods used then in Chinese Tea drinking.

It happened when Buddhism was really prolific and monks from Japan would go all the way to the Chinese Mountains and drink tea before meditation to keep awake. They then brought the concept back and adapted it.

Instead of us revealing the entire history here, you should definitely go down and have a listen for yourself. It was really intriguing, interwoven with historical moments such as the beginning of the Silk Road, the overthrowing of excessive dynasties and more. Our guru also introduced us to the seven types of tea and described how the lighter the colour of the tea, the more caffeine it has because it’s less processed and fermented. Such teas also require a lower temperature to brew.

So, when it comes to Pu-erh, a really fermented dark tea, a high temperature is needed and the longer it is left to age, the better the quality.

A really intriguing tea was the yellow tea, which was meant only for the Emperor back then. It consists of Yellowed Peony, Yellowed White Needles and other flowers, which can still be found today.

But the demand is low and it proves to be a rather hard tea to brew. Too high a temperature and it becomes bitter, too low and the aroma of the tea doesn’t comes through, which explains the lack of appeal.

Our current tea drinking methods are closest to the Qing Dynasty and there are five steps involved: The first step is to boil water, followed by the second step, warming the tea set. She first showed us how to hold the tea pot made of Purple Sand – a porous clay material that shines over time with tea poured over it. 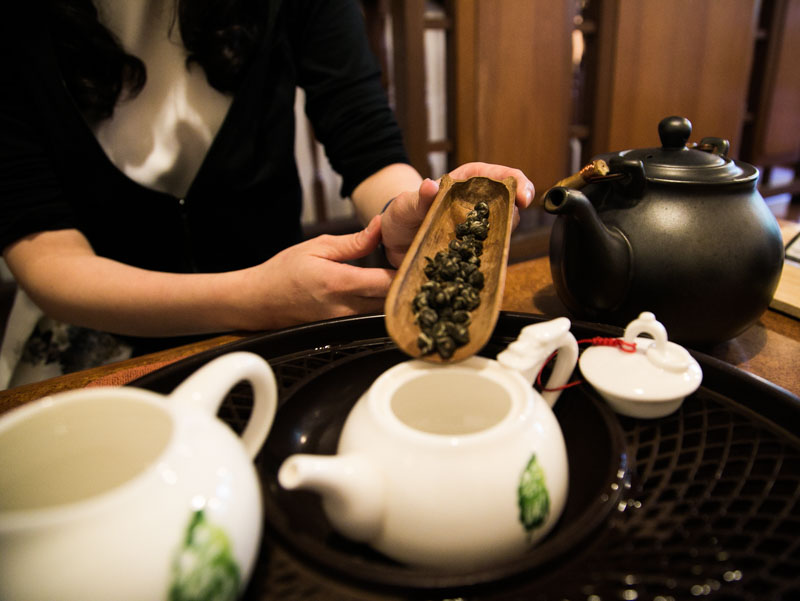 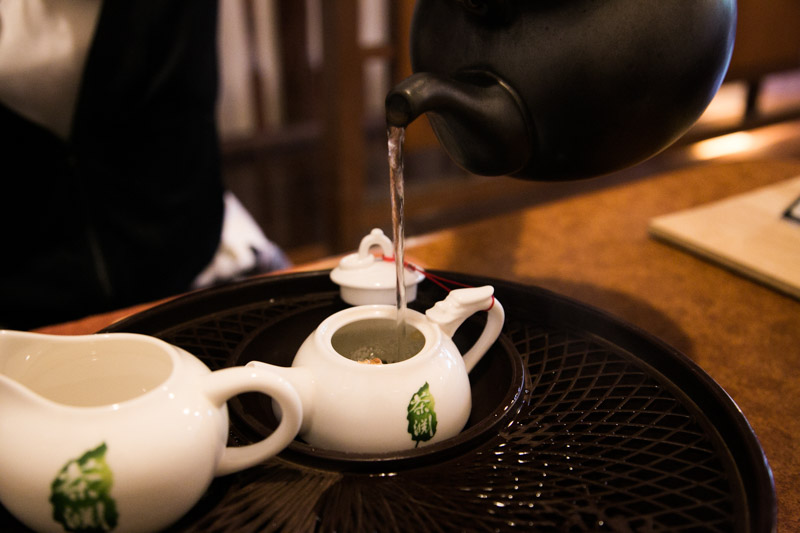 The first brew with one spoon of tea leaves is used to wash the Purple Sand tea pot. The third step is to brew the tea again, and this time round the tea is poured into the control pot before serving. The reason being to ensure a consistent strength of tea served to all parties. The fourth step is to pour the tea three quarters full into a small cylindrical cup and serve. You’re then supposed to take a whiff of the tea, to enjoy the aroma and notes.

Then pour the tea into the other cup provided and before drinking it, take another whiff of the empty cylindrical cup. You then cool it by rubbing it between your palms before taking another whiff of the cup when it’s colder, to note the difference in aroma. 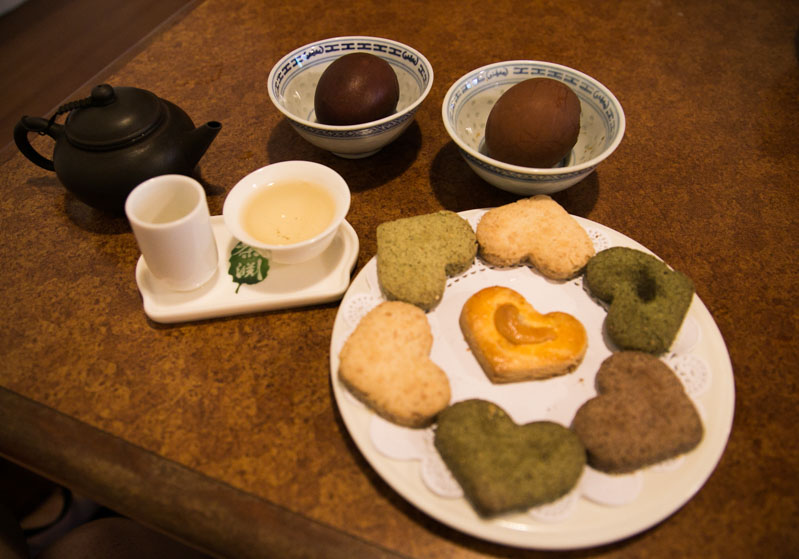 Drink three sips of the tea and enjoy with the complimentary tea snacks provided, which includes tea cookies and fragrant herbal eggs.

After learning how to brew the tea, you can try your hand at it and enjoy the rest of the day there, chit chatting over tea and cookies. By the end of the session, we did feel more at ease without even really noticing the gradual change in mood.

Brewing and appreciating Chinese tea in such a tranquil environment slows down your thoughts and pace, allowing you to fully immerse yourself in the process and reach a calmer state of mind. It also widens your knowledge of Chinese tea and the beauty behind it.

All of which is an experience that everyone should try at least once.

Previous articleGastroBeats @ i Light Marina Bay 2017: 8 Food Stalls With Delicious Food That Will Light Up Your Taste Buds
Next articleRoom4Dessert Takes Over Studio 1939: Don’t Miss Dessert & Cocktail Pairings By Pastry Chef Will Goldfarb From 10 – 18 Mar ’17