When we think of the word “bar”, we usually associate it with finger food like spam fries, truffles fries and popcorn chicken. While the concept of pairing alcohol with Indian cuisine is not uncommon, it doesn’t really cross my mind when I’m looking for bars to chill at. But a recent trip down to The BAR Station at Arc380 taught me how to spice up (literally) my drinking experience with some charcoal-grilled naan, butter chicken and more. Whether you have kids, or you’re a kid at heart, The BAR Station is where you can enjoy a session of darts or play a round of air hockey. 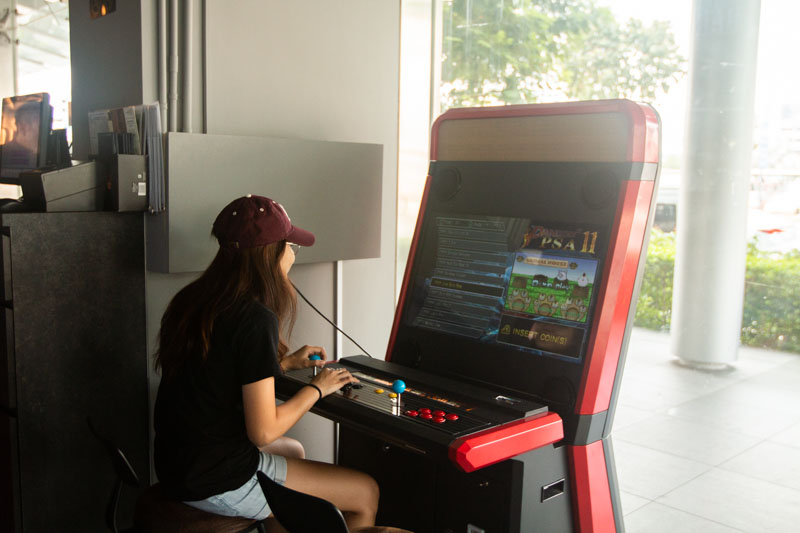 And yes, they even have an old-school arcade machine. Perfect for reliving your childhood, or maybe taking an Instagram shot or two. 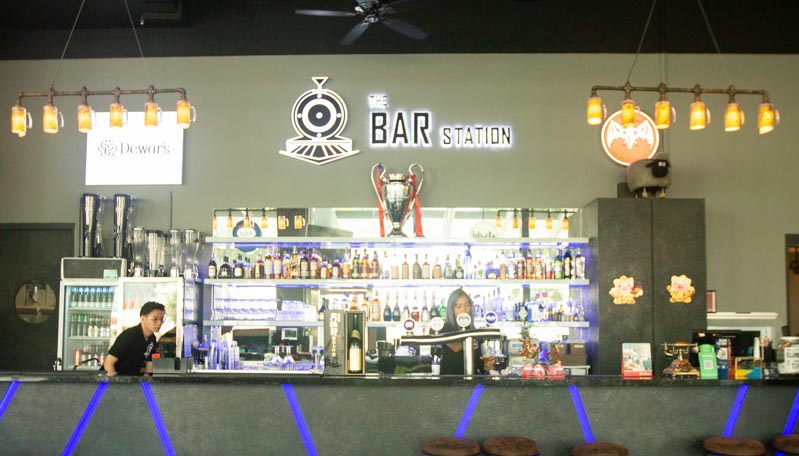 The bar offers a variety of alcohol promotions, like their happy hour deal—on Saturdays and Sundays—for all beers on tap.

We decided to settle in with some beers that were on tap, and were recommended the Asahi Dry (S$8) and Kronenbourg Blanc (S$8). During happy hour, the beers are priced at S$9 instead. 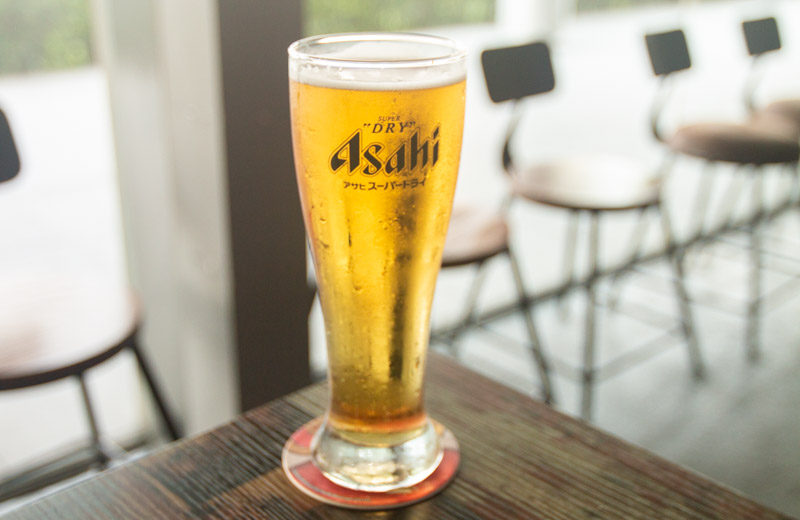 If you enjoy the crisp taste found in certain German beers, Asahi Dry is the drink for you. It wasn’t too malty or heavy, unlike typical beers. For those who don’t enjoy the prominent taste of malt, Kronenbourg Blanc is a suitable option. While the hoppy flavour is still very much present, the sweet fruity element in the beer helps to balance it out slightly.

I also like how the drink goes down the throat smoothly without that burning sensation. 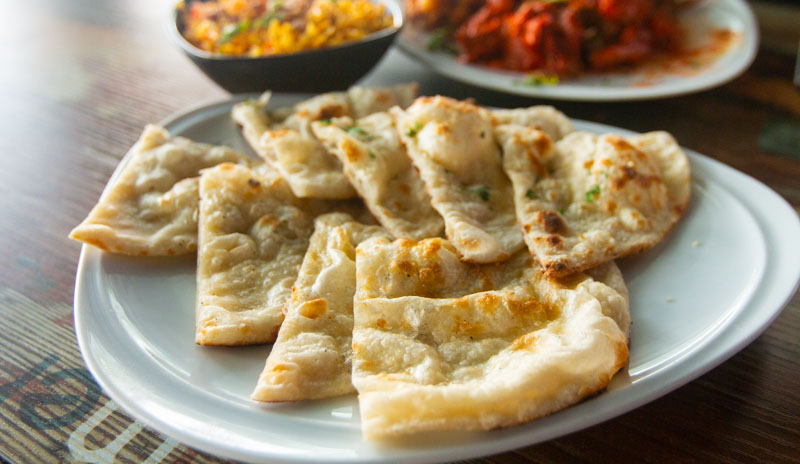 We started off our meal with none other than some naan, which they cook in a traditional charcoal oven. 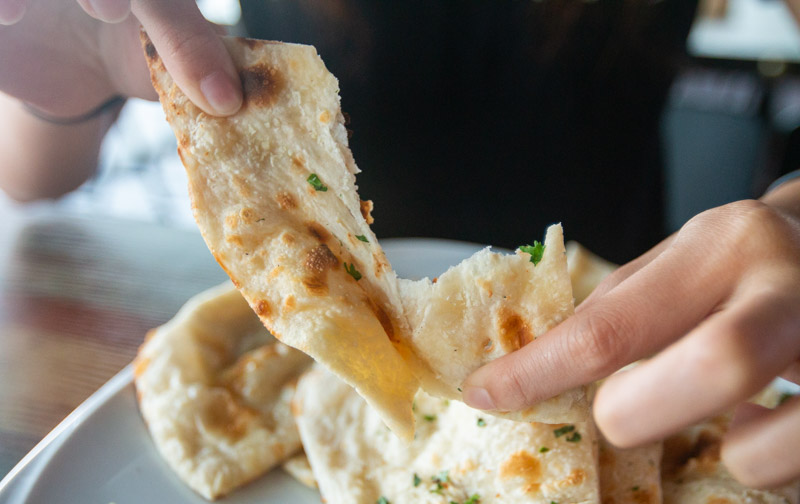 My expectations were deflated when I noticed their naan came thinner compared to some other places, which serve it thicker. Sadly, biting into a piece felt more like a crispy prata instead, and I would have enjoyed it just a bit denser.

While I could taste the wash of garlic on the Garlic Naan (S$4), I would have liked a stronger coating of it for a more obvious flavour. 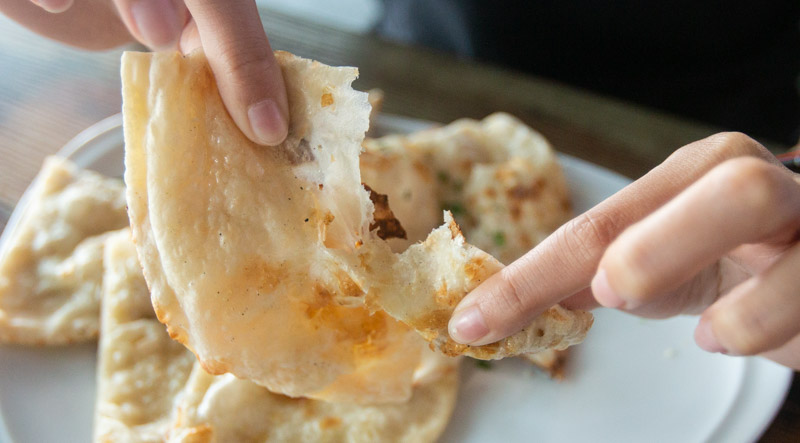 It was a pity that the Butter Naan (S$4) did not fare so well either. The buttery taste was very faint and resembled more of plain naan. If only there was a thicker slab of that buttery goodness melted into the naan!

Thankfully, the rest of the dishes we ordered were able to make up for the slightly disappointing start to our meal.

The great thing about dining at places that offer Indian cuisine is the availability of vegetarian options. We picked the Aloo Gobi (S$10), which is a cauliflower and potato dish. The cauliflower was easy to bite into, with a good crunch to it. The potato was firm but soft, and when eaten with the cauliflower provided a tasty combination of textures in my mouth.

It may seem like a fairly plain dish, but it was a refreshing salad that kick-started my appetite. 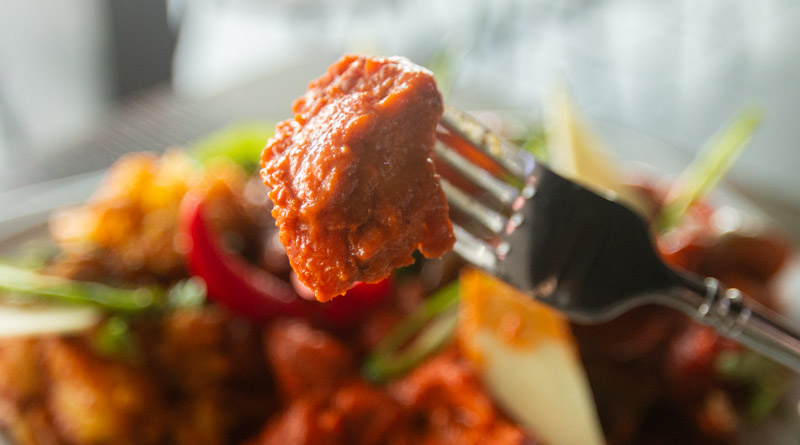 Moving on to the more savoury side, we got the classic Butter Chicken (S$S14) to try. The chicken was tender and meaty, with a nice amount of fat for some juiciness. 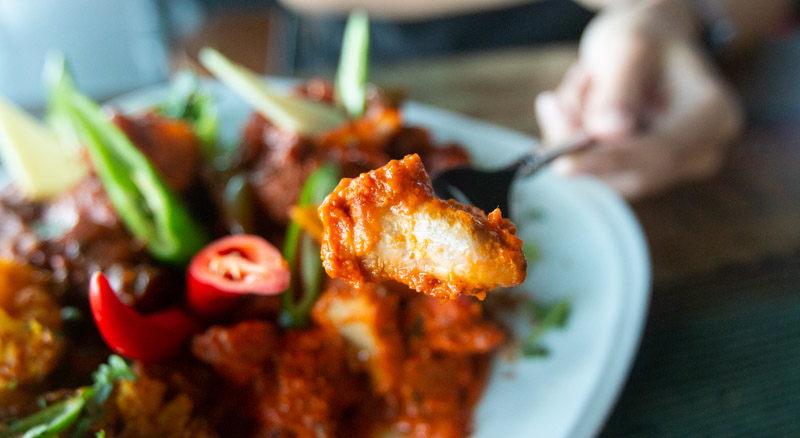 The creamy tomato-based sauce used was tangy and sweet, which helped to further whet my appetite. It was mildly spicy—just enough to make my tongue tingle. Great for people like me who have a low spice tolerance! The next staple Indian dish we got was the Mutton Vindaloo (S$15). The mutton had a slightly tougher texture, but was still fairly easy to chew. 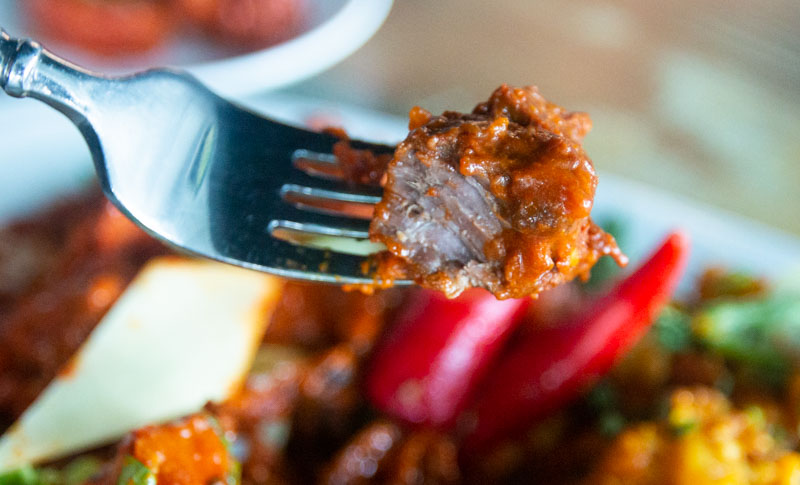 The lamb had a pretty strong gamey taste, which I personally do not enjoy that much. The chunky yet soft potatoes in the mutton gravy helped to distract me from it though. 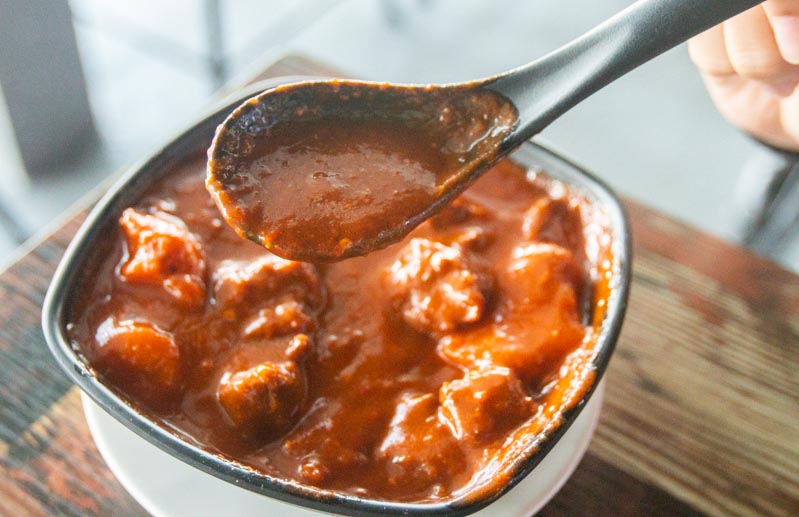 While the tomato-based gravy also contained a gamey flavour, it reminded me more of beef stew gravy, which my taste buds were somehow more in favour of compared to lamb meat.

I liked the sweetness from the tomatoes, but my enjoyment was quickly interrupted by the spice, which sent me scrambling for iced water. 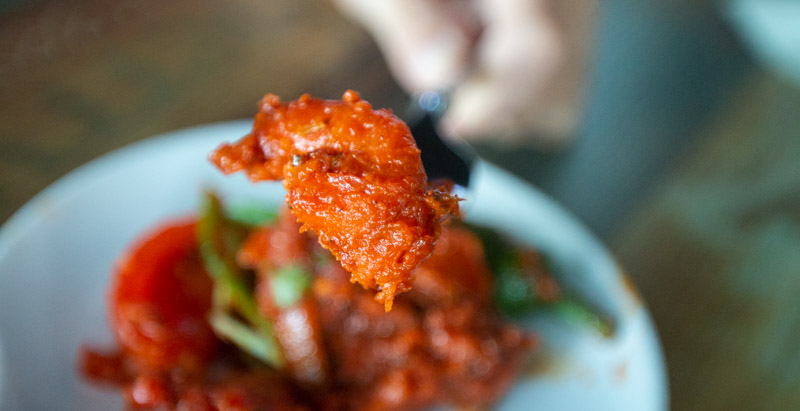 While the spice from the mutton hit me straight away, the heat from the Chilli Prawn (S$18) took a while to creep up on me. The tiger prawns were coated in a sweet and sour chilli dressing, which helped to mask the spiciness. 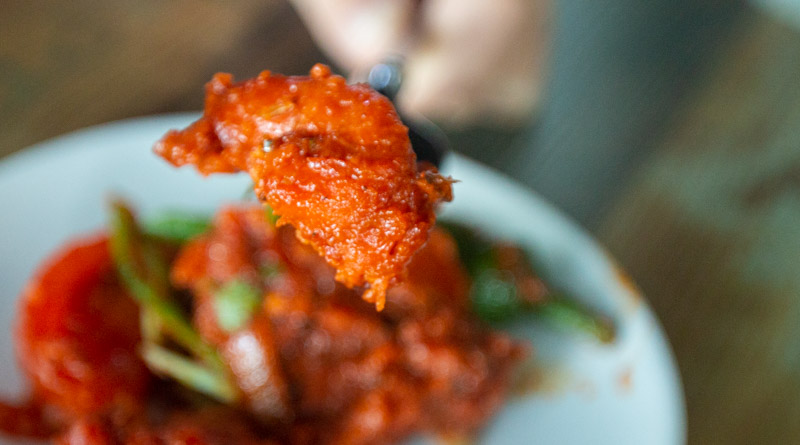 The prawns came de-shelled, which I greatly appreciated. Another plus point of having them de-shelled is that they are able to really absorb the sauce for better flavour in the meat.

Chewy with a bite to it, I found myself taking bite after bite, which was probably why I didn’t notice the spice kicking in. 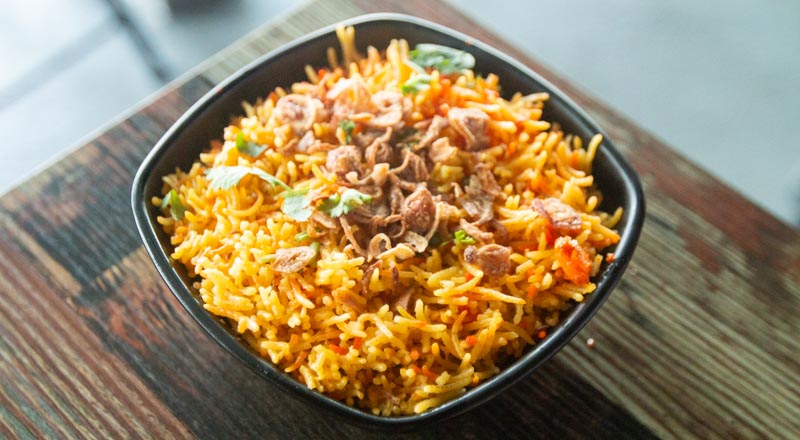 With all that spice having a party in my mouth, I was thankful for a bowl of vegetarian Briyani Rice (S$13), which helped to mellow out the heat. 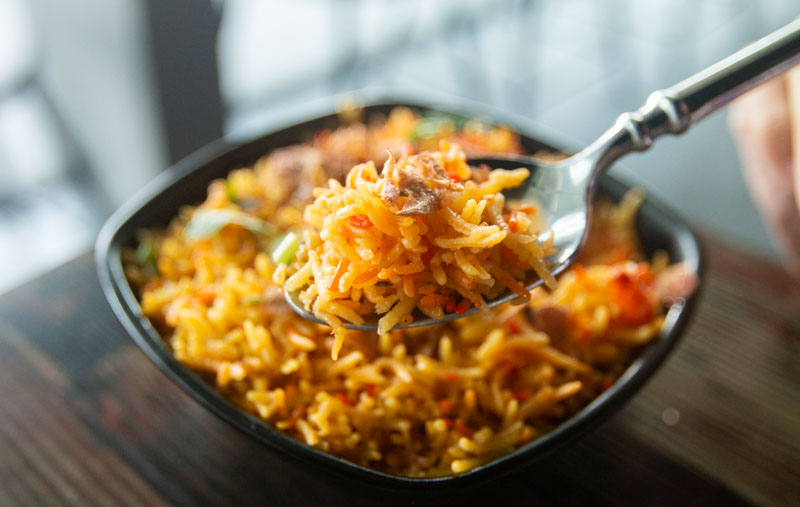 The rice was soft but still textured, and the herbs added an aromatic, medicinal fragrance to it.

The fried onions also provided a nice crunch with each mouthful of rice. My only gripe was that I could not justify paying over S$10 for the rice, which I could easily get for cheaper at other places.While I wouldn’t exactly categorise the prices of the dishes under affordable, I think the casual and chill atmosphere of the place makes it worth the occasional re-visit.

I don’t think I would order the naan again, but I wouldn’t mind going for the various meat options they have. They also offer a ton of Western delights, like pizza and pasta, which I might give a try next time!

The next time you have a chill night out, consider switching up your popcorn chicken for some butter chicken instead at The BAR Station (Arc380).