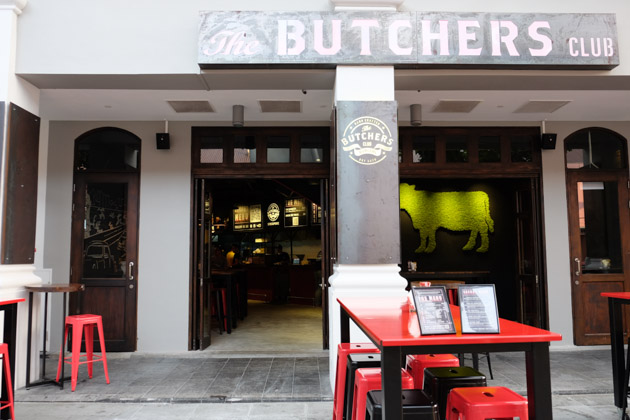 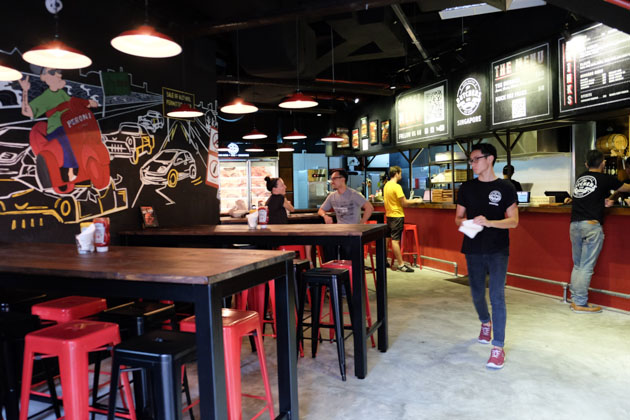 What started as a butcher shop and private dining room in Aberdeen, has now flourished into a burger joint that is presently in Hong Kong, Bali and now, Singapore. The Butchers Club Burger is situated in The Cannery, a sure destination for all locals or tourists looking to refuel on food, drinks and nightlife.

In the Hong Kong branch, butchery and sausage lessons are available, a concept the team hope to bring to Singapore. Though not materialised yet, this is certainly something we can all look forward to. The Butchers Club Burger really do care about what goes into your patty and they have a mission of promoting nose to tail butchery. While the primary cuts are used for their signature dry-aged steaks, the secondary cuts from the rump, brisket and chuck are dry-aged before being grounded into the juicy patties for your enjoyment. The dry-aging process ranges from 7 – 30 days and is done in-store. It’s a labour-intensive process, but it’s certainly worth it in our view – the flavour of the meat is outstanding. Aside from meat, the team have also thought carefully about their fish suppliers. All fish is freshly caught in New Zealand and air-flown the same day to maintain quality. The team only order what is needed, making the seafood menu limited but very, very fresh. 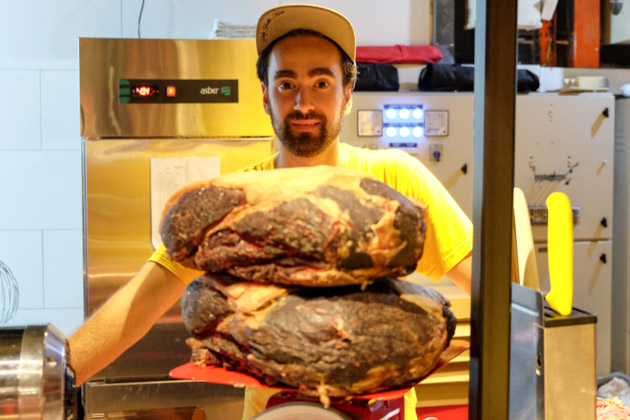 Meet Matt, the head chef of The Butchers Club Burger. He is your go to guy for the patties and yes, very appropriately positioned behind the chunky slabs of cuts. Alcohol wise, they serve exclusively Peroni beer whilst Bourbon lovers will be spoiled for choice. The selection of bourbons is vast and range from $10 to $20 a glass. There is really no better pairing for a burger than a good pint of beer or glass of bourbon, somebody should make it illegal not to do so.

The Butchers ClubB urger only has ‘The Burger’ on their menu but there is a QR code in-store for the secret menu. The idea behind that is to spur their customers on about being more inquisitive about what they have and what they do, increasing interaction and creating a better experience at The Butchers Club Burger, rather than it being merely another burger joint. 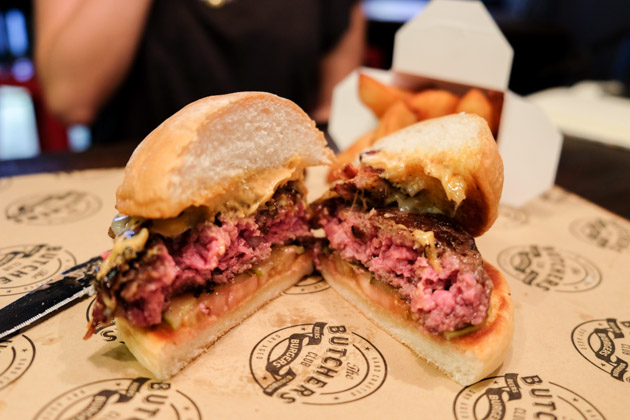 The Burger ($20). Yep, we are on it. Being the staple of The Butchers Club Burger, it is a traditional cheeseburger with bacon strips, tomatoes, pickles, english white cheddar and of course their very own patty, drizzled with a special sauce. Hands down one of the best burgers I’ve tasted. I am not exaggerating one bit.

With absolutely no marinade, just secret seasoning, the patty is nicely grilled on the outside, medium rare on the inside, and retains its delicious angus beef flavour. The patty is juicy but not overflowing such that it would ruin the whole experience.

The burger buns are baked in a french bakery using a secret formula, ensuring they remain fluffy, unlike others that turn soggy after a while.

Pairing very well with their special sauce that enhances the tender patty, this is topped with all the quintessential ingredients of a cheeseburger. The pickles give it a hint of tanginess while the cheese and crispy bacon adds to the amazing decadence. Sold.

The duck fat fries are piping hot, chunky and very fragrant in flavour. Do ask for a side of their caramelised onion sauce for dipping purposes, trust me you won’t regret it. Also, finish the fries fast because they should not sit for too long and really, you don’t want to share this with anyone. 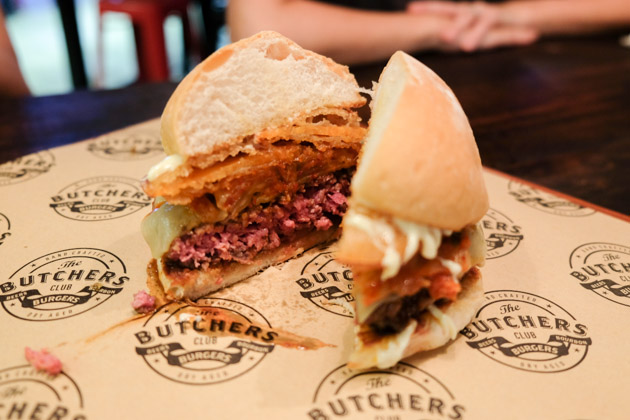 I have never tasted kimchi with beef patty and Matt did let us know that his inspiration was from the pairing of bulgogi beef and kimchi, which makes so much sense and gave a sour and spicy layer to its flavour.

The tempura added a crunchy texture and remained crispy throughout, refusing to soak itself in the patties juices. Kewpie mayo, the holy grail of all mayo, makes it all the more creamy and fragrant. 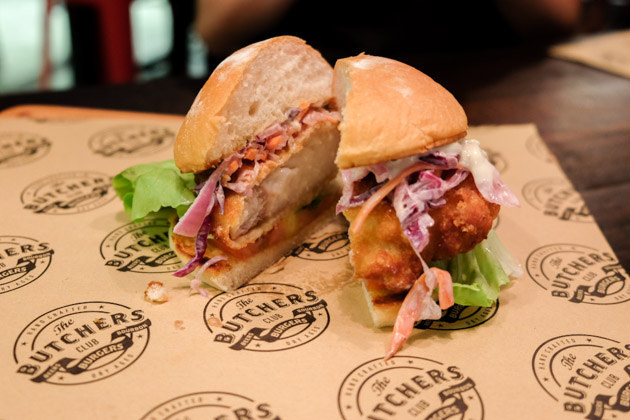 Captain Ahab ($24). Instead of the panko breaded barramundi, we got a panko breaded ling fish fresh from New Zealand. I was surprisingly pleased with this fish burger. In most burger joints the fish option doesn’t get much attention but this one deserves a shout out and definitely holds its own against the beef counterpart.

The patty is made up of a good chunky fillet of ling fish fried to the right amount of crispiness on the outside, and remaining creamy and fresh on the inside. The fillet is not oily at all and extremely delectable. Paired with in-house tartar sauce and spicy coleslaw, this fish burger should not be overlooked.

Do check out their other burgers such as the Double Happiness ($38) and Red Eye Reduction ($28). The former embodying ‘bigger, better, faster’ real well, it promises double of everything while being sandwiched between cheese buns.

The latter is certainly your hangover cure and is only available on weekends for now. It has a slightly thinner patty to go gentle on your abused stomach but also loaded with hash brown, bacon and eggs topped with hollandaise sauce because we all know the craving for oily decadence on a hangover is a real situation.

Vegetarians fret not as there is also a vegetarian burger, What Food Eats ($23) that consists of a chickpea patty, fried halloumi, lettuce tomato and topped with spicy greek yoghurt.

I had a really good time at The Butchers Club Burger and could tell that Matt and his crew are very serious about the quality of burgers served. They are all about sourcing the freshest ingredients, preparing them according to orders, seasoned and grilled properly. They even thought about the buns. Talk about true dedication.

One final interesting fact for you – Matt was previously a music journalist back in Toronto, so he hand picks all the songs on The Butchers Club Burger’s playlist. I had to stop someone mid speech to ask for the song’s title when even Shazam couldn’t recognise it.

Food and drinks, check. Music, check. Atmosphere, check. The Butchers Club Burger is certainly worth every bit of a visit. So go on down and reward yourself.