The Coffee Roaster: How One Man’s Devotion To Coffee Went From Opening A Cafe To Conducting 100 Pax Workshops

It’s not every day I meet someone who has a story that is so inspiring and of true tenacity and devotion.

When I met Ang Swee Heng, owner and founder of The Coffee Roaster at NUS and learnt about his journey, his endearing story laid heavy on my heart. 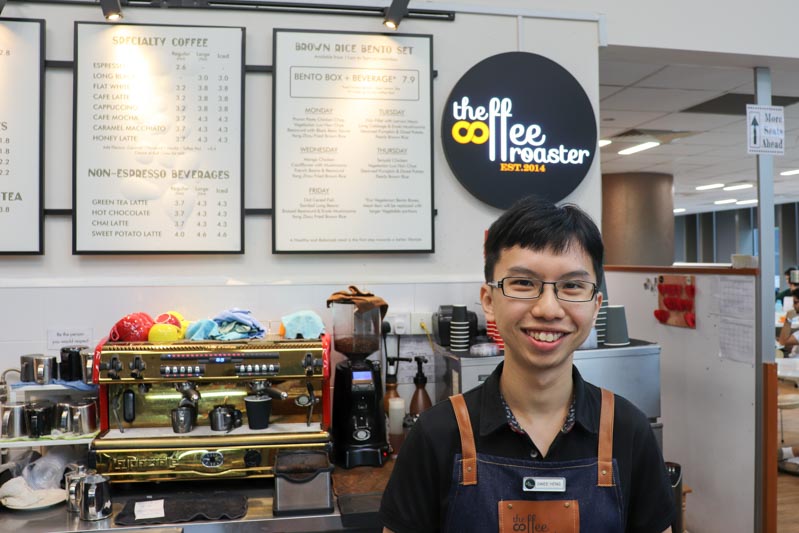 Established in 2014, the then-university freshman pieced his profound attachment towards entrepreneurship and his unending love for coffee to build The Coffee Roaster. If juggling an education with a social life wasn’t already tough, this man challenged himself to run a business on top of that. 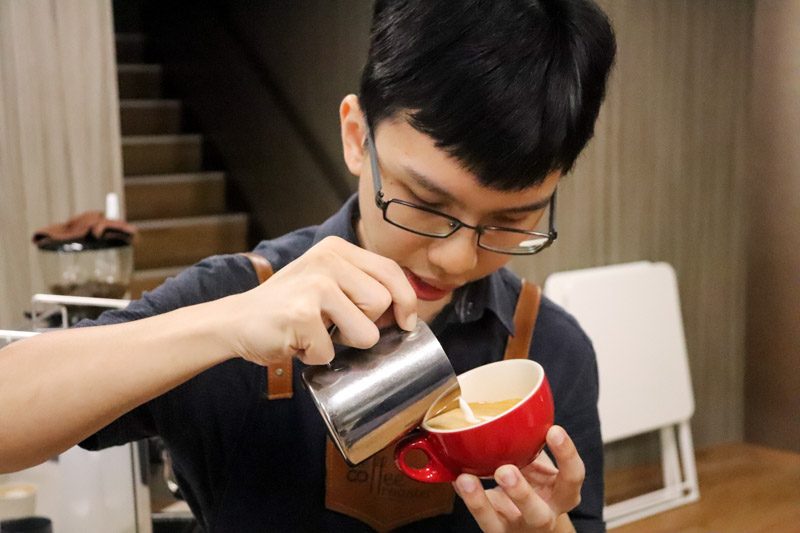 What intrigued me the most was how far Swee Heng took his budding interest and turned it into fruition. The Coffee Roaster started as a humble cafe serving up cups of coffee to university students. Yet time proved to be no obstacle for the determined young man.

Now, Swee Heng manages an academy and runs workshops for corporate teams, schools and the general public – up to a whopping 100 pax. As Managing Director, Head Barista and owner of The Coffee Roaster, Swee Heng has also earned the title as an inspirational figure for many. How so? Well, I had the honour of attending one of Swee Heng’s classes and snuck a peek at The Coffee Roasters’ workshop curriculum. It was humbly mesmerising with every segment I witnessed the coffee connoisseur in action and I was all too eager to get started.

Coffee Appreciation: The Different Categories And Characteristics Of Coffee

Swee Heng and his mother established their first branch at Tanjong Pagar in 2014. His unending love for coffee proved no obstacle for them when they first commenced, yet good times didn’t last long. Revenue was low and soon the end of their lease had them at the crossroads. What was to become of this fruit of labour by the mother-and-son duo?

Yet, it was but a crucial lesson to work harder for the endearing leader. When a rental space opened up at his school,  he brought work closer to school and continued the business. From there, The Coffee Roaster became more than just a school cafe, it became a learning institution for students, staff and the public to develop and expand their knowledge on coffee and all it entails.

The academy at The Coffee Roaster is run by the man himself and as an NUS Business graduate, Swee Heng intertwined his education takeaways into his business model to produce a well-rounded curriculum. His workshop begins with Coffee History And Appreciation, ensuring his students and clients grasp the concept before doing any hands-on activity. 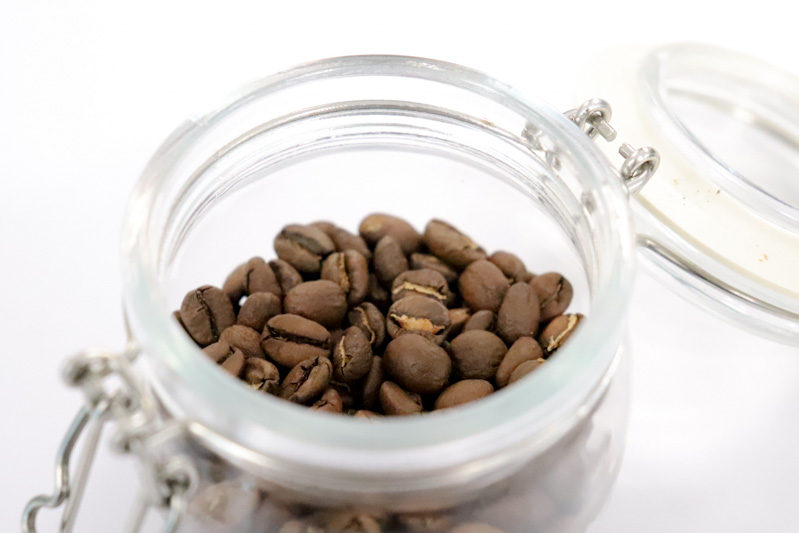 The Coffee Roaster serves a mighty 500 to 600 cups of coffee a day and you can rest assured that Swee Heng and his team are deemed fit to conduct his coffee crash course.

Swee Heng held a composure that of any leader that was passionate and all enthusiastic about teaching the ways of coffee, one bean at a time.

We were first introduced to two different types of beans: Robusta and Arabica. The former has is more complex, with fruit, chocolate and caramel notes, which is more commonly used in cafes. The latter has an earthy note and sometimes described as burnt because of their heavy-bodied character, and often found in our regular Singaporean kopi.

By first identifying the types of beans that fall into our daily cup of coffee, it simulates an awareness into the next step of the workshop which most of us were most looking forward to — Latte Art.

More often than not we think our cuppa is no more than coffee grinds, water, milk and sugar, but the steps of coffee making considers each and every component to be of high and equal importance. 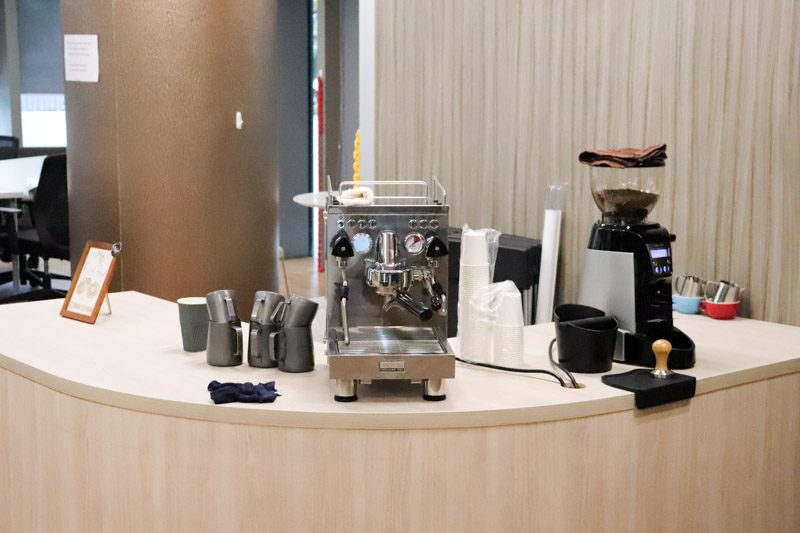 Now, onward to the nitty-gritty ways of coffee-making. For this practical session, Swee Heng and his team members conducted it on a smaller scale, with only four attendees in the comfort of their home ground, The Coffee Roaster at NUS.

We first had a crash course on the stations and steps to follow, then had our go with each station to serve up that perfect cuppa. 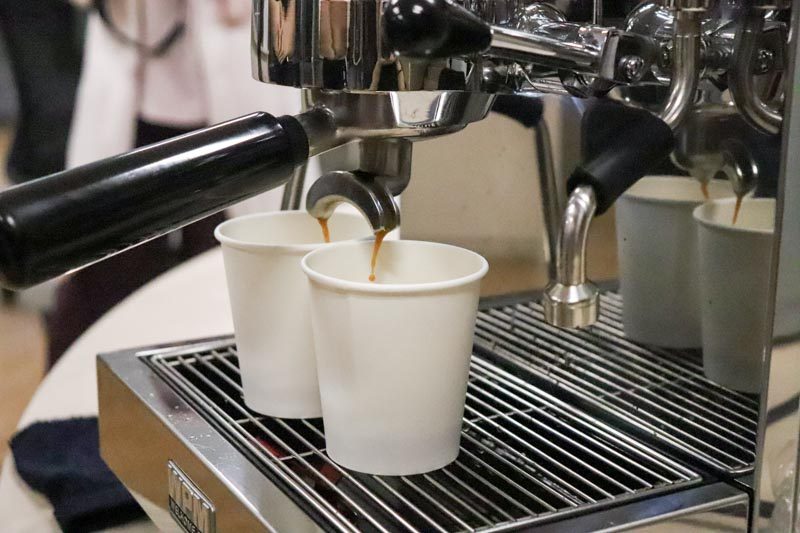 From bean to cup, every step is of utmost importance. As a daily coffee customer, the sight set before me had never been so complicated yet so alluring.

Depending on the number of shots, the dosage of the beans has to be of the correct weight and extracted over a fixed time. The size the espresso beans are ground have to be monitored as well to ensure a consistent extraction, lest you find your drink too bitter or even sour. 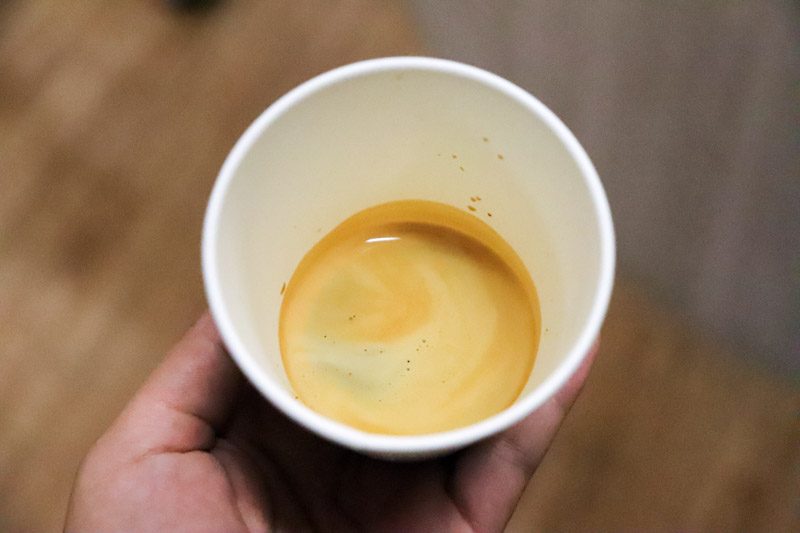 You know that tan-coloured foam that lays atop a freshly pulled espresso shot? It’s called crema, which is something I learnt was important to nail to get a fuller flavour. Plus, it is a striking factor to measure the barista’s skills. A quality shot has a thick layer of crema that leaves no trace of the dark espresso that lies beneath it.

With his years of experience of coffee-making, Swee Heng and his apprentices found it a breeze to achieve while us first-timers struggled to attain it. But of course, practice makes perfect. 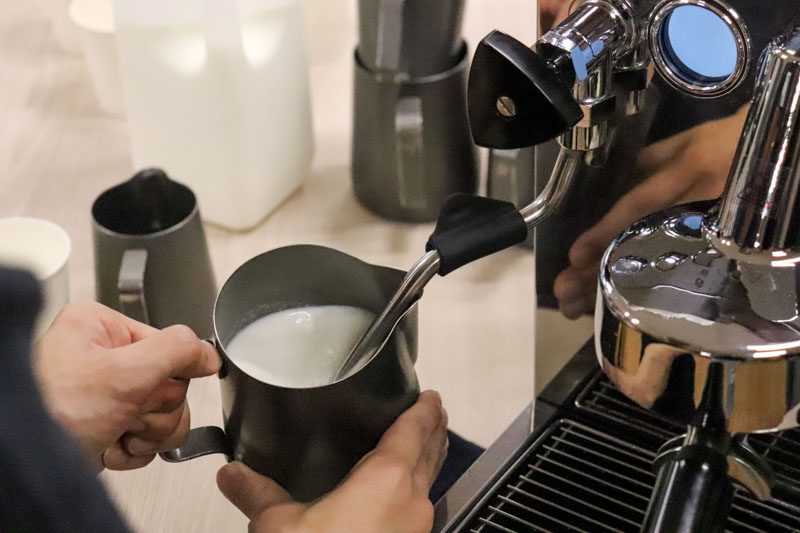 Frothing the milk was no walk in the park too. The steam wand is to be held at a 45-degree angle and accurately placed in cold milk to reach a consistency that won’t coagulate the milk from overheating. 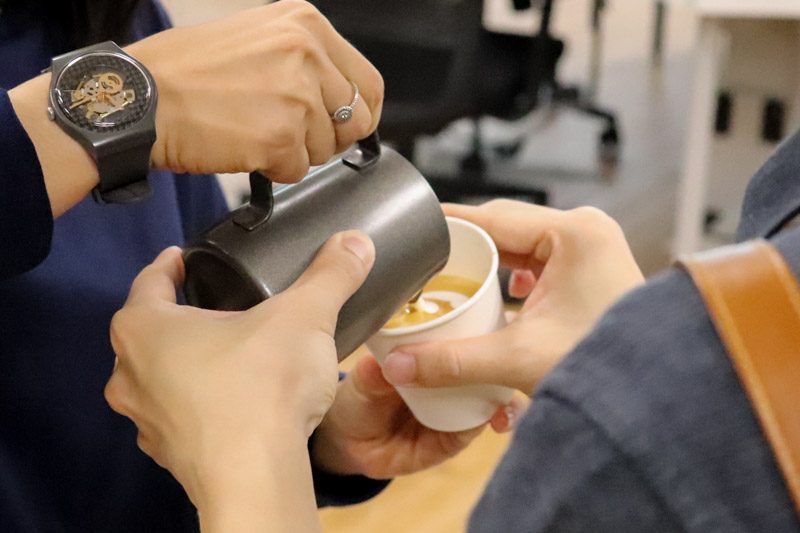 I always thought the art of pouring the milk into the espresso could be grasped easily just based on watching my coffee orders being prepped every morning. Boy, was I wrong.

The height that the pitcher is held adjacent to the cup mattered as heavily as every other component. Latte art was a whole other aspect into this cuppa and in a mere half-hour, I was wholly convinced coffee-making was more than just mixing two liquids.

After a first few messy cups (and a huge embrace of my inner wannabe barista self), there was finally some result! Voila! This first experience only marked the beginning of my coffee-making journey and through the tedious steps it took me to get here, I truly embraced The Coffee Roaster’s passion for coffee to delve deeper. There’s a first for everything, right? 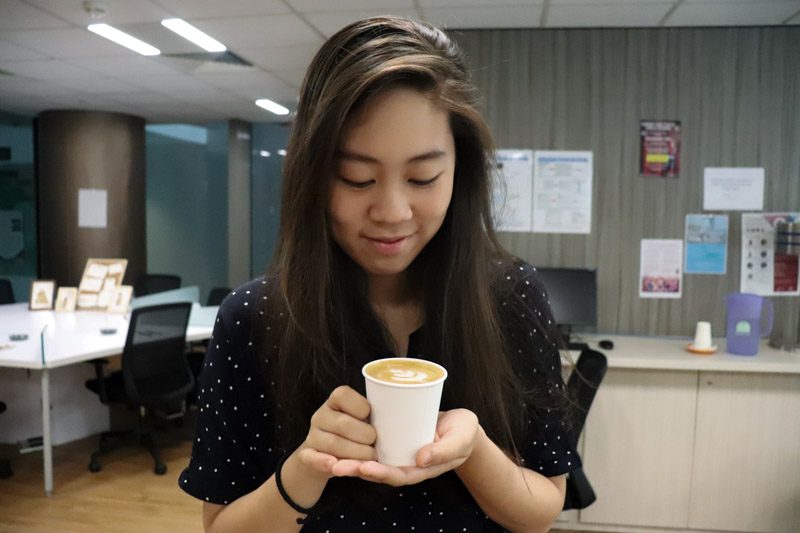 I also got to take an image with my first pour and despite my shaking hands which resulted in a rather terrible pour, this memory will definitely remain etched in my mind. It was enjoyable how the team at The Coffee Roaster made the experience so personal and one can’t help but feel all warm and fuzzy from the welcoming atmosphere. 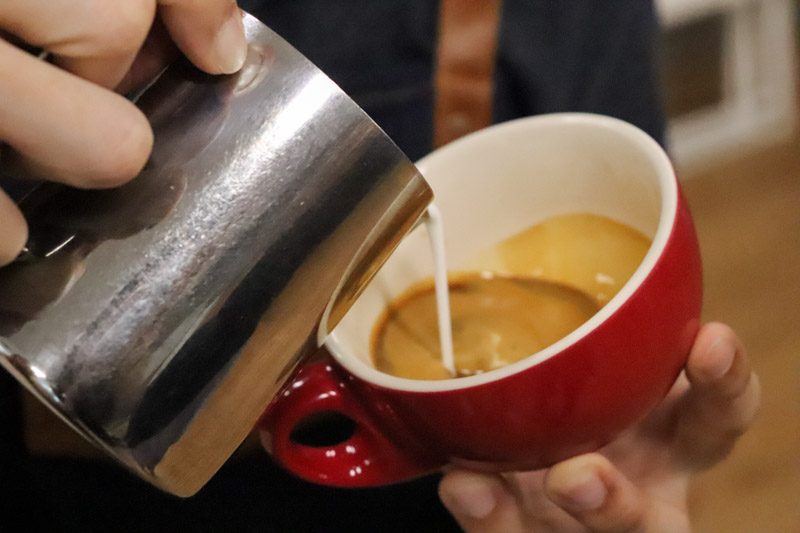 Swee Heng showed us a few of his moves and emphasised that his expertise didn’t just happen overnight, yet took time, effort and drive to reach such a skilled level. 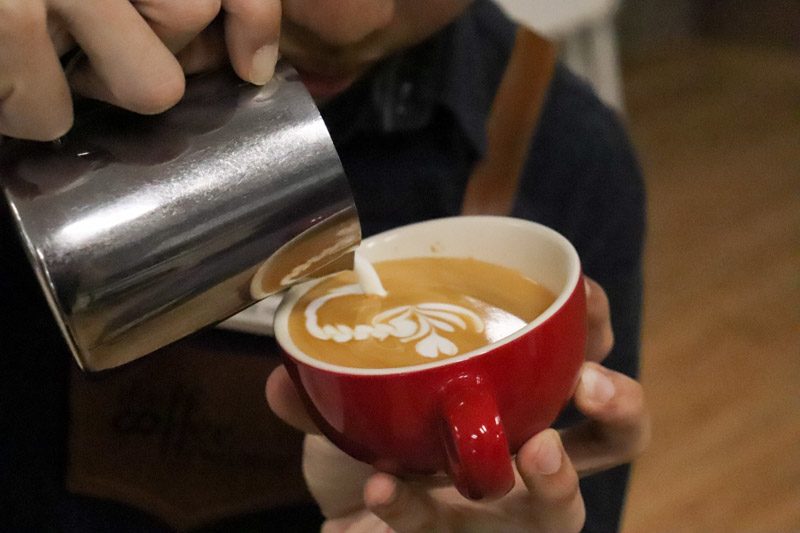 “As a young entrepreneur, I think this generation focuses a lot on impact and making a difference. These workshops are programmed not just to drill technical knowledge and skills but rather, engage them with a syllabus that piques their interest and deliver a five-star experience,” he quipped. 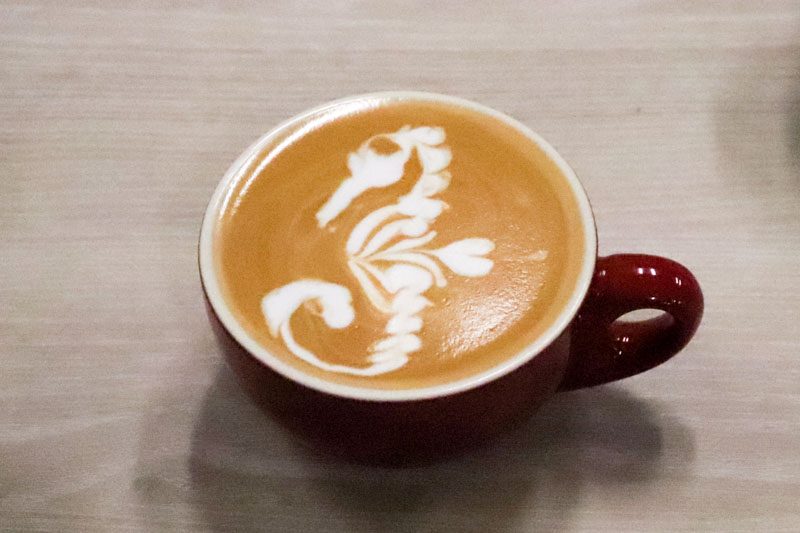 The latte art expert served his first cup of coffee with a seahorse piece he did in the Singapore Latte Art Championship.

I’ve seen baristas whip up a design as wicked as Swee Heng, but none quite with the same enthusiasm and concentration as him. 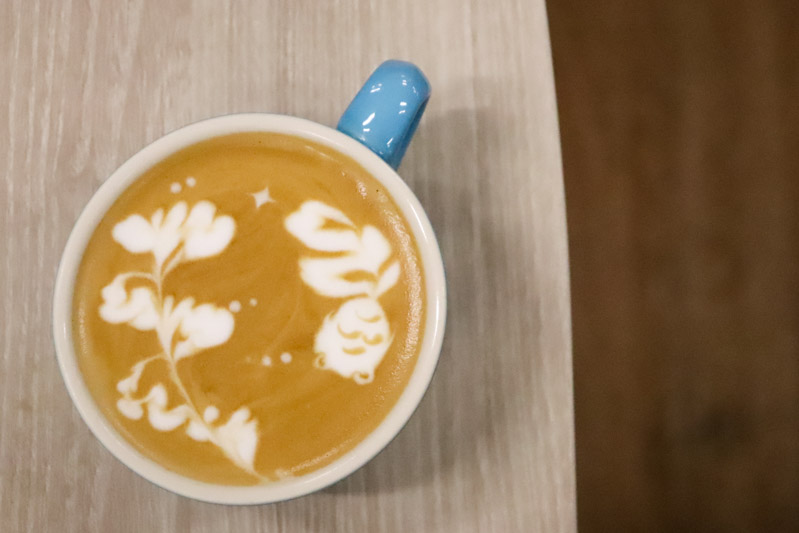 Another stellar piece he did was that of a goldfish in a fish tank. Don’t be fooled by the mere visual appeal it exudes, for it’s more than just the pitcher and milk that goes into it. Swee Heng showed us the cautious techniques that goes into this work of art.

And of course, this wouldn’t be possible if it wasn’t for his sheer dedication into refining his skills. It’s more than just practice; it’s having the right mindset to practice continuously.

Coffee Painting: The Therapeutic Art Stemmed From A Sustainable Effort 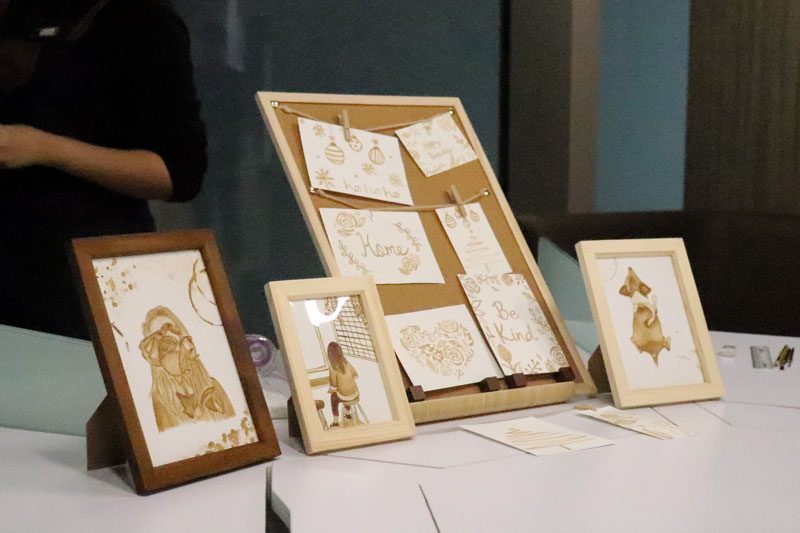 The last segment was Coffee Painting which is the first of its kind for Singapore. The therapeutic practice stemmed from an afterthought regarding environmental sustainability effort which prompted Swee Heng to consider how he could use his one favourite item to do his part.

Instead of throwing out expired instant coffee sachets, he emptied the grounds into a bowl, mixed it water and started painting. 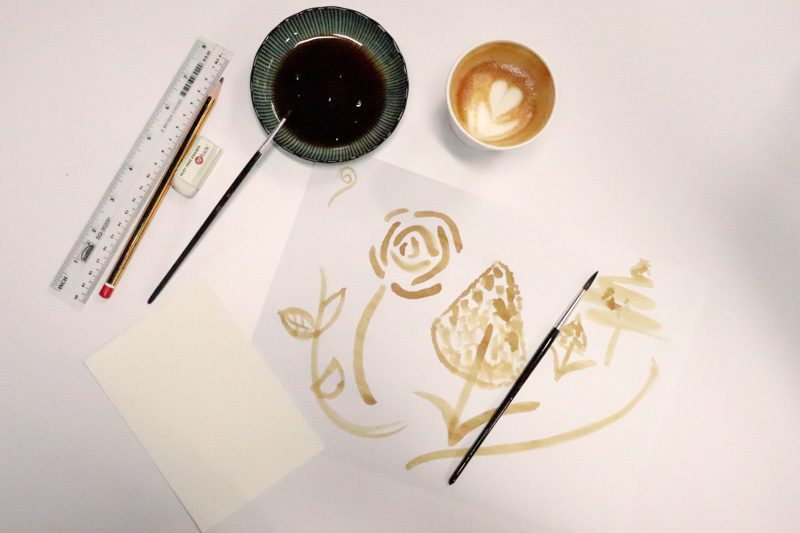 With some classical tunes, we were guided by our instructor to start with simple strokes. The mono-colour drawings may seem dull on first look but the concept behind this initiative goes beyond sight. 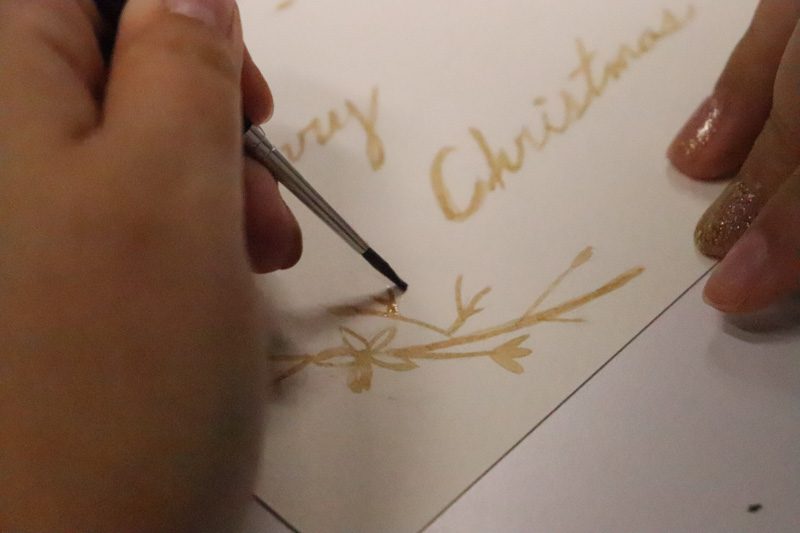 Sipping on the cup of coffee we made earlier from the previous station, it was truly an experience to get hands-on with coffee through these different practices. Sip, paint, sip, paint. And the cycle goes on.

I started to ponder on the many forms of art and how it remains an ever-versatile notion. There is more to just the intrinsic use of coffee beans and this relaxing course had well-ingrained the calibre of taking the time to understand and discover the nitty-gritty aspects of coffee. 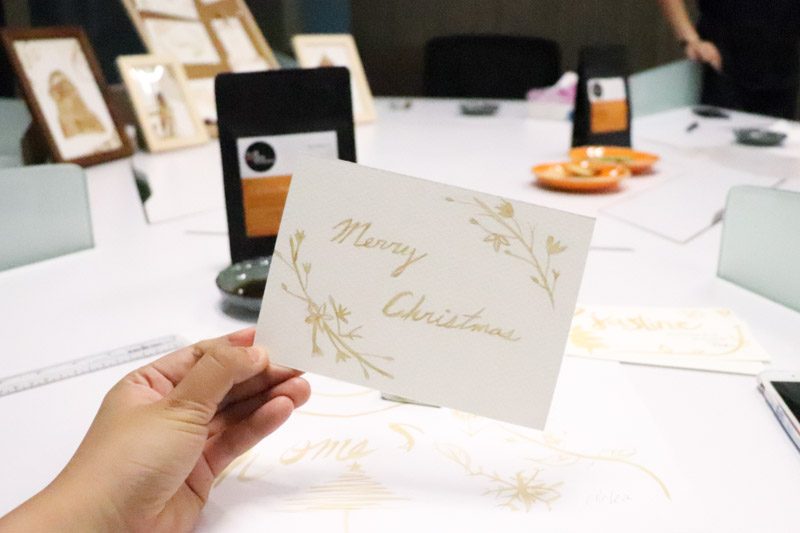 If it wasn’t already ingenious enough for Swee Heng to go beyond the basic fundamentals of a coffee appreciation and latte art workshop, he has ultimately pushed it to the limit by conducting these two-hour curriculums, for 100 pax. The session is no different from what I had experienced and no less of the guidance I received.

The Coffee Roasters’ clientele ranges from renowned hospitals, schools and other major companies. With various stations manned by skilled instructors, it’s inspiring to see how Swee Heng’s devotion surpasses all potential challenges. It’s in the quality, not quantity.

And he still makes it work. 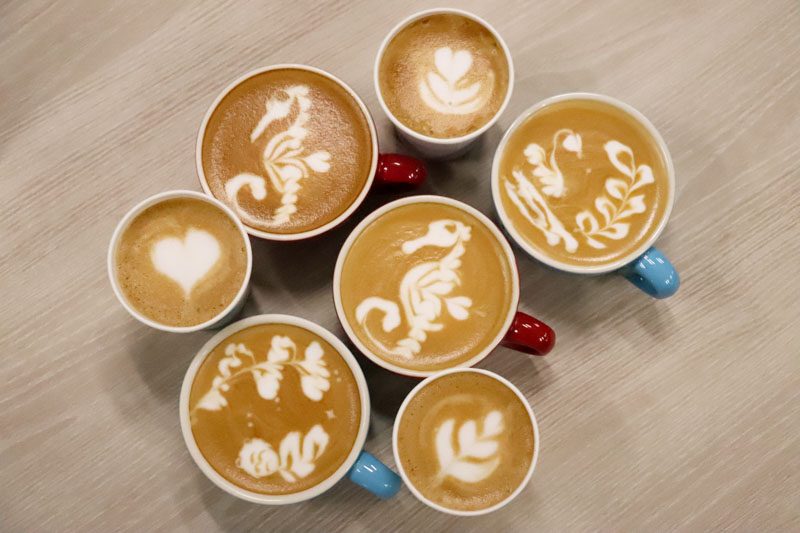 The journey Swee Heng embarked on was one that he derived solely from his passion; one that had no clear promise of success at the road. Yet, his devotion proved to be bigger than the challenges and risks at hand.

Does it matter if his efforts towards society are recognised, appreciated or rewarded? For Swee Heng and The Coffee Roaster, there are more imperative priorities. As long as hearts are earnest to learn, he’s sure his story will do its part in encouraging budding individuals out there. habitat by honestbee: Go Cashless & Shop + Dine At This...