I must admit something I have taken for granted pre-Circuit Breaker is the ease of heading over to my favourite neighbourhood cafe for a dessert fix.

Seeing as there are still a couple more weeks of Circuit Breaker left and my major sweet tooth demanded desserts, it seems like  Three’s A Crowd was the answer. 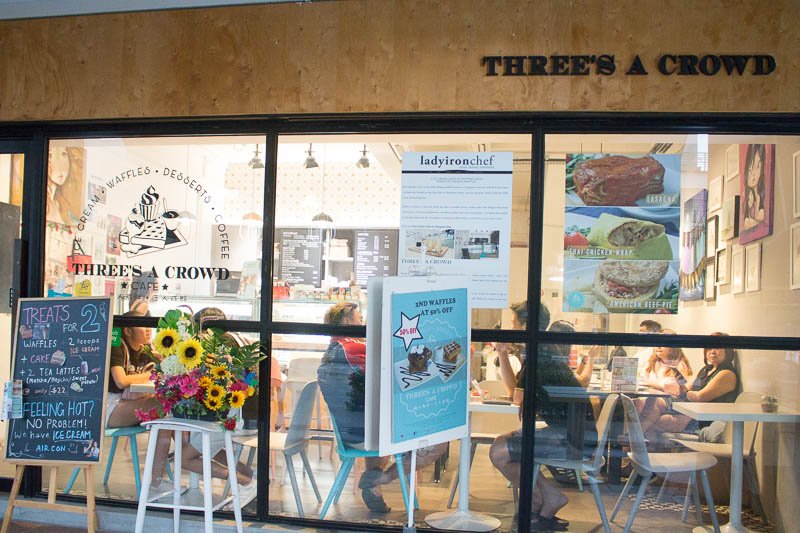 Located at Tampines West Mrt, Three’s A Crowd is pretty accessible and has been a long-time heartland favourite.

Since we are all on #tapauplease until the Circuit Breaker ends, I ordered some of Three’s A Crowd top hits including their waffles and ice cream. We can’t go to cafes right now, but why not bring the cafe to you? 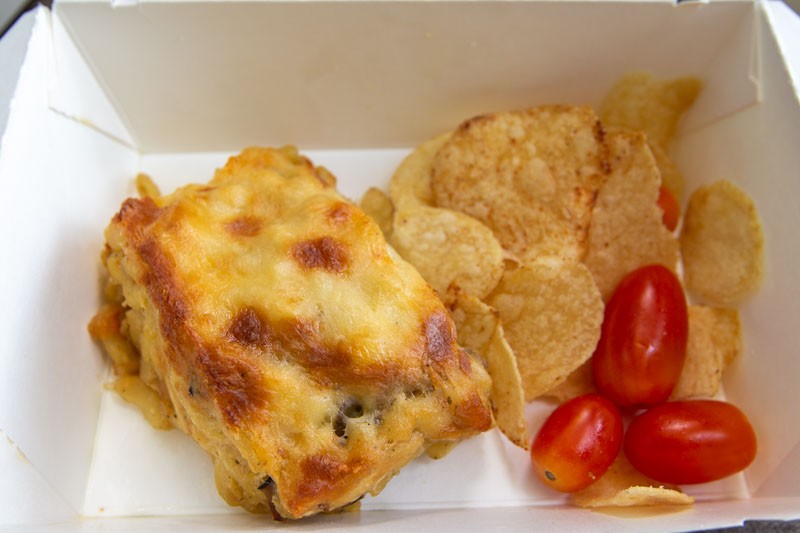 Like any good cafe romp, we shall begin with something savoury. There is nothing more satisfying than Mac N Cheese (S$11.80) and Three’s A Crowd knows that.

What you get is a thick, hunky, and slick Mac & Cheese with a side serving of chips and cherry tomatoes. 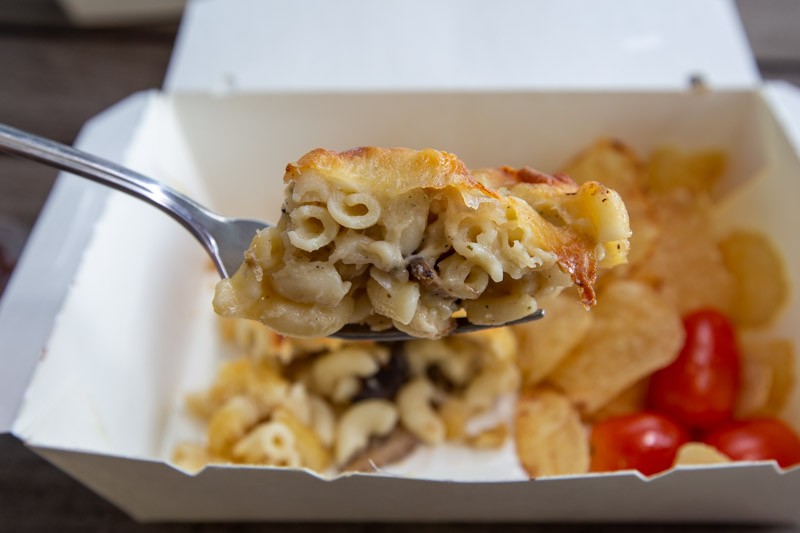 The Mac N Cheese might have cooled down a little during transit, so I suggest heating it up just a smidge. This way, you get that melty gooey goodness as you would in a cafe. In between those layers are moreish slices of mushrooms for both flavour and texture.

While each cheesy forkful was perfectly adequate, the Mac N Cheese lacked some oomph that would have taken it to the next level. Nevertheless, this will still make for an excellent lunch. 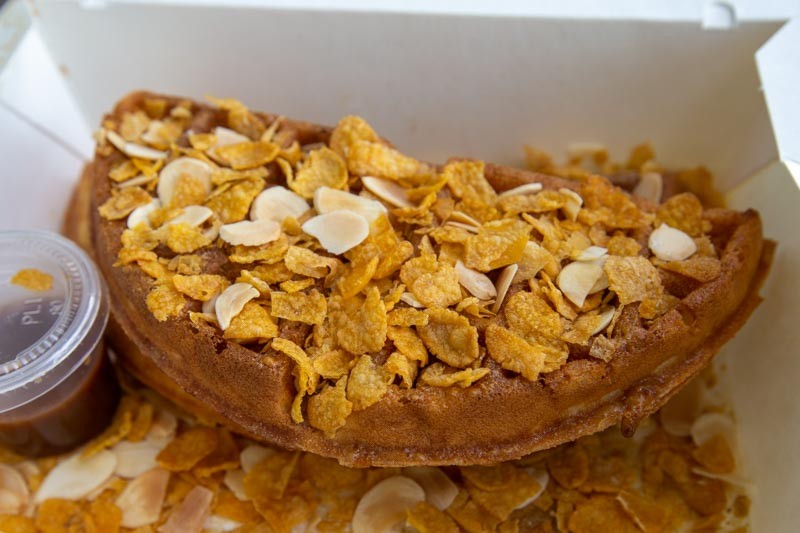 Now, onto the main event: the waffles and ice cream. The first on the list was one that Three’s A Crowd was well known for: the Horlicks Waffle (S$9). This came showered with corn flakes, slivered roasted almonds and a dusting of Horlicks powder. For those a huge sweet tooth, Three’s A Crowd has got you covered. A tub of salted Horlicks sauce awaits.

Waffles are the ultimate Sunday brunch item and you should expect your waffle to be crisp but with an irresistible pillowy centre. 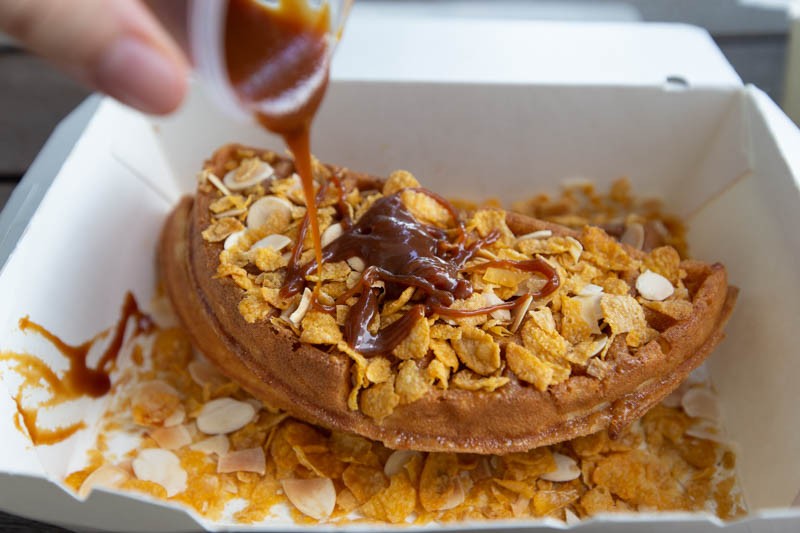 As one does with waffles, I drizzled the thick treacly salted Horlicks sauce the best I could on top of the waffles.

The Horlicks in the sauce was more subtle than expected, and the sauce bore a similar flavour to salted caramel. 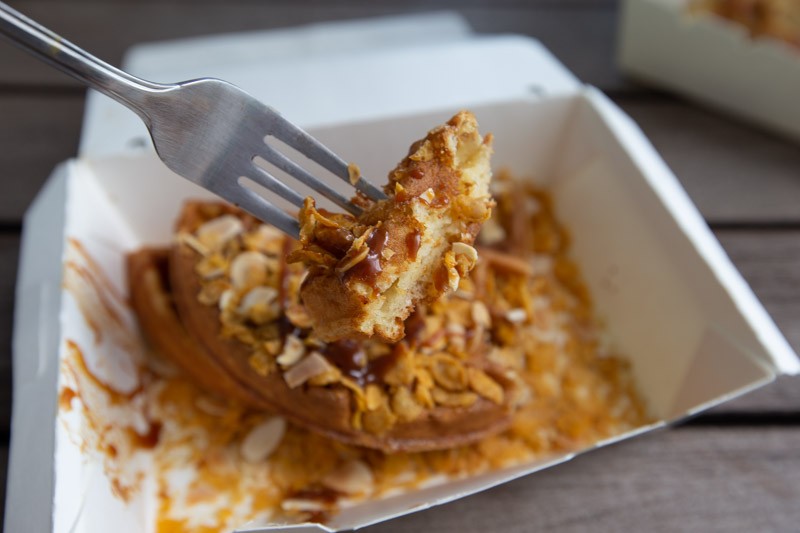 Well, Three’s A Crowd certainly did not disappoint. Their waffle was toasted on the outside, but soft and flavourful in the centre. I dare say, it was good enough to eat sans all the toppings. Of course, the toppings only made the waffles even more palatable.

The malty Horlicks was more apparent here while the cornflakes provided good crunch and added to the nostalgia. A hot cup of Horlicks and bowl of cereal always reminds me of bleary-eyed mornings in primary school where mornings were absolutely brutal (they still kinda are now).

I enjoyed the Horlicks waffles and liked how the different textures played with each other. An excellent choice for brunch if you would like to #tapauplease. 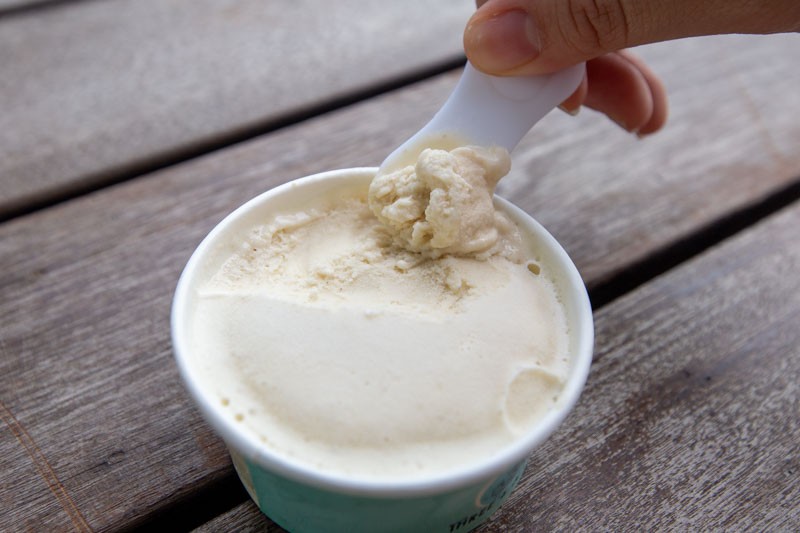 It was recommended that I complete this Horlicks trifecta with a scoop of Three’s A Crowd’s Salted Horlicks (S$4.50). Even though the ice cream hit the mark for me—seeing as it was thick and creamy with just the right amount of Horlicks—I felt like the ice cream was best enjoyed on its own.

The slightly salty ice cream contrasted the sweet malty Horlicks quite nicely; I was all for this local take on ice cream. 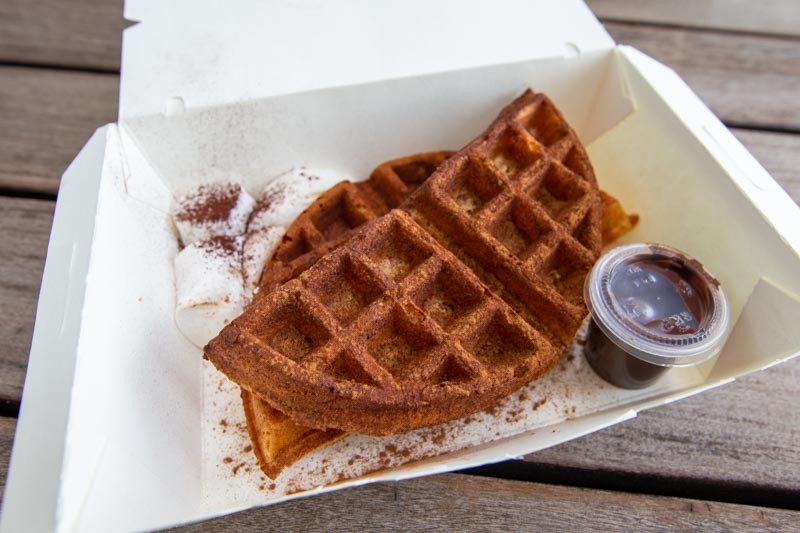 If Horlicks isn’t your thing, then the Churros Waffles (S$8) should tickle your fancy. This one came with a thick cinnamon blanket, a side of marshmallows and chocolate sauce. It is my opinion that anything with a chocolate sauce should be used as liberally as one can. I was expecting an overly saccharine chocolate sauce that completely mars the flavour of chocolate.

But luckily, this was one was surprisingly well-balanced, rich and velvety.

Just like the one before, this waffle was light and airy with that gratifying crunchy surface. Not overly sweet and with a healthy dose of cinnamon, this was in the churros family, alright. 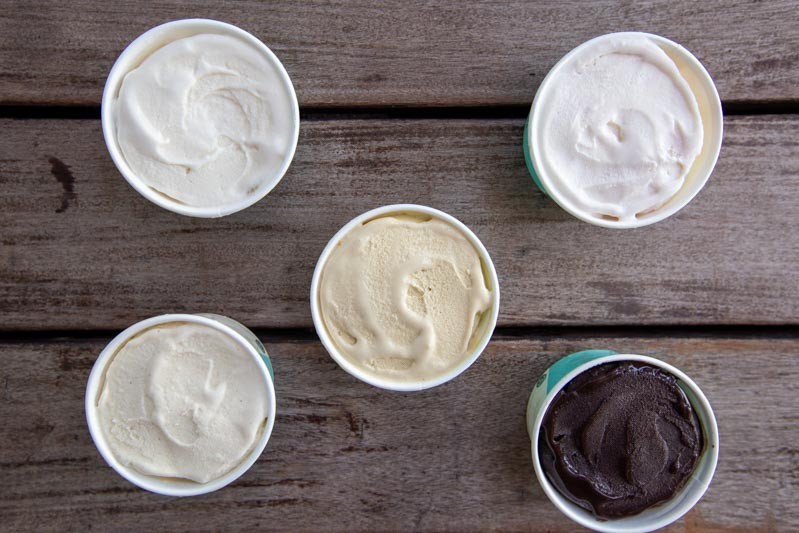 One thing Three’s A Crowd is known for is also their ice cream. These are tasting portions, so fret not, when you do order from Three’s A Crowd, you’ll be getting a more substantial serving. As a bona fide chocoholic, I knew I had to begin with Leegacy (S$4.50). No, that’s not a spelling mistake. Three’s A Crowd specially made this flavour in honour of the late Mr Lee Kuan Yew.

While this ice cream delivered those chocolatey notes, I would have liked the ice cream to have been thicker and richer. I was pretty impressed with Three’s A Crowd version, creamy and chock full of pistachios. Balanced and just the right amount of sweet, I couldn’t help but go back for another spoonful. For something a little lighter, the Honey & Vitamin C (S$4.50) would cool you down without being too cloying. A special flavour that’s part of Three’s A Crowd’s Leegacy Club, this ice cream was light on my palate and clean tasting. The texture was particularly light fluffy so this was a lovely midday snack. If you’re lounging around at home and find yourself hit with the munchies, Three’s A Crowd has a bunch of seasonal cookies that will curb those cravings. For cookie flavours, you can expect coconutty Ondeh Cookies (S$22), buttery Pineapple Tarts (S$22) and Sea Salt Dark Chocolate Cookies (S$18).

My favourite has to be the Sea Salt Dark Chocolate Cookies (S$18). These chocolatey pebbles were crumbly, airy goodies that were nicely tempered with a good sprinkle of salt. Pre-order your cookies by 24 May 2020 on Three’s A Crowd website.

There’s a comfort in neighbourhood cafes like Three’s A Crowd that promises a sweet treat with a little dose of nostalgia. Three’s A Crowd’s goodies are available for pick-up and delivery. All you have to do is contact them at +65 9819 5887 and you will have waffles in no time.

It only gets better. Three’s A Crowd is offering 10% off their ice cream and all you have to do is use the code SETHLUI on their website. All the more reason to #tapauplease!