UsQuBa Singapore: Sip On The Finest Scotch and Dine Like A True Highlander 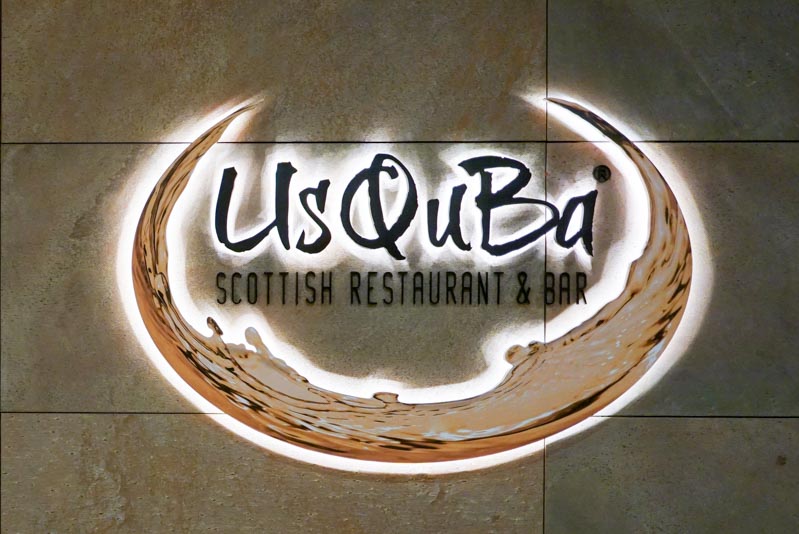 UsQuBa — I’ll admit I had a little difficulty grasping the restaurant name when I first saw it, almost mistaking it for an odd spelling of the lovely meaty dish Ossobucco. As I was later informed, the Scottish restaurant’s name has nothing to do with veal shanks. Rather, it is a catchy, shortened form of the Gaelic word ‘Usquebaugh’ that means whisky. 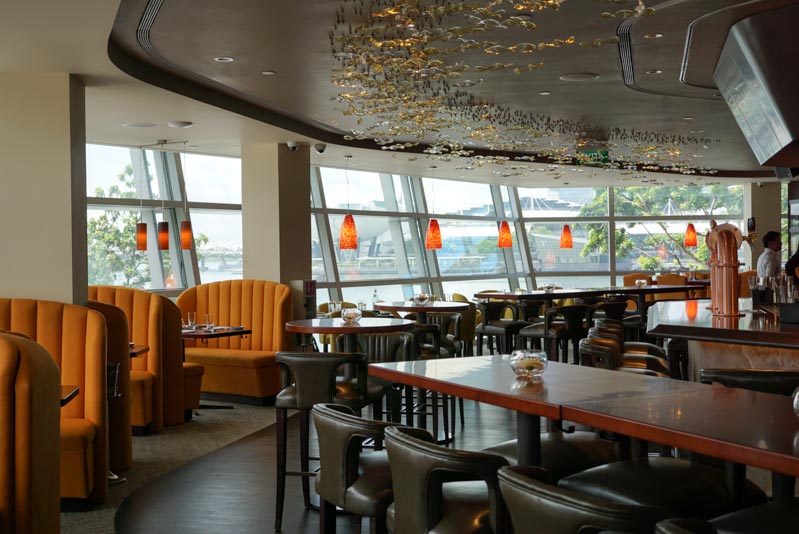 Only very recently opened, UsQuBa occupies a large portion of the second-floor space above One Fullerton that many people may remember as the old Butter Factory. The spacious, 160-seater restaurant has been refurbished in orange and rose gold tones, exuding much warmth.

An elaborate glass feature hangs from the ceiling of the bar, each constituent piece handmade and imported from India. When light hits the glass, it refracts out in a golden, whisky-like hue. UsQuBa’s long bar is well-stocked with a curated selection of whisky, handcrafted gin and beer. They have a whopping 70-80 expressions of whiskey, from both independent and official bottlers, and are also the first place in Singapore to have Scotland’s iconic Tennents beer on draft. 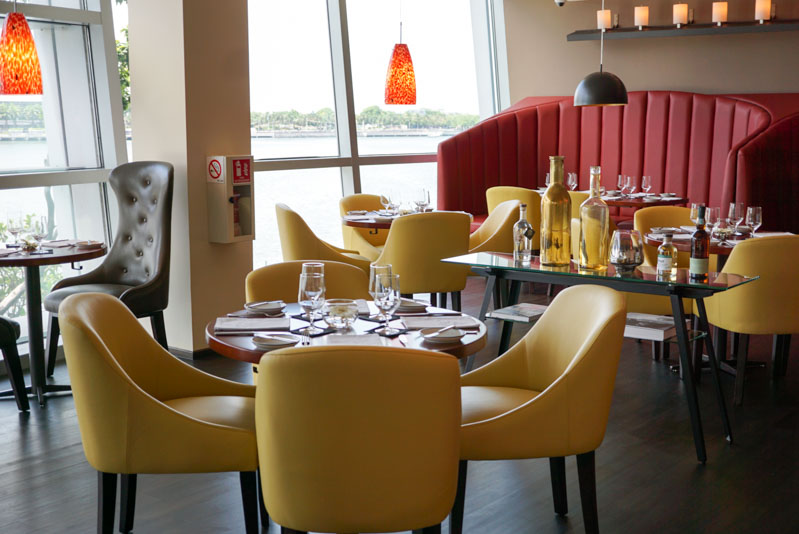 The restaurant, unlike many others, does not offer private dining rooms. Instead, it is very subtly divided into smaller cul-de-sacs such as The Den (pictured above) for hosting larger parties. UsQuBa may be a fine-dining establishment, but the whole restaurant isn’t over-the-top ritzy or unnecessarily ostentatious. This deformalised setting definitely makes the whole ambiance more comfortable. 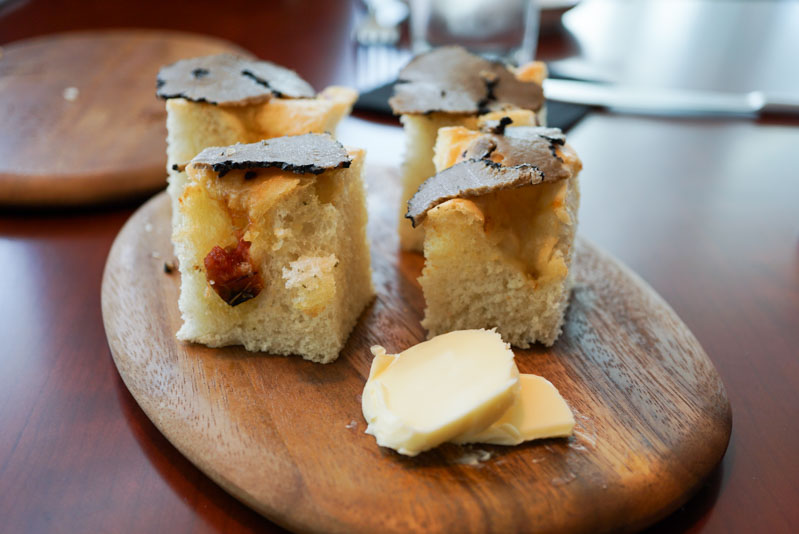 UsQuBa’s Executive Chef Guven Uyanik has an impressive history working in a host of Michelin-starred restaurants and alongside famous chefs. This time around, he brings natural produce from Scotland with him into the Singapore kitchen and reprises award-winning French cooking techniques in his delivery of New Scottish cuisine.

To start our meal, we had Chef Guven’s handmade Tomato Foccaccia with Scottish Butter. The savoury, herby bread, tartness of the dried tomato and earthy truffle were appetite-whetting, especially enhanced by the rich, smooth butter. A trio of starters followed the bread. I was quite delighted by the gorgeous Orkney Islands Scallop Ceviche ($25). The scallops were startlingly fresh, sweet and delicate; the sea urchin was creamy, melting as it met the warmth of our tongues. Compressed cucumber and apple added some acidity to the dish, but not enough to convince me of this dish’s ceviche title. 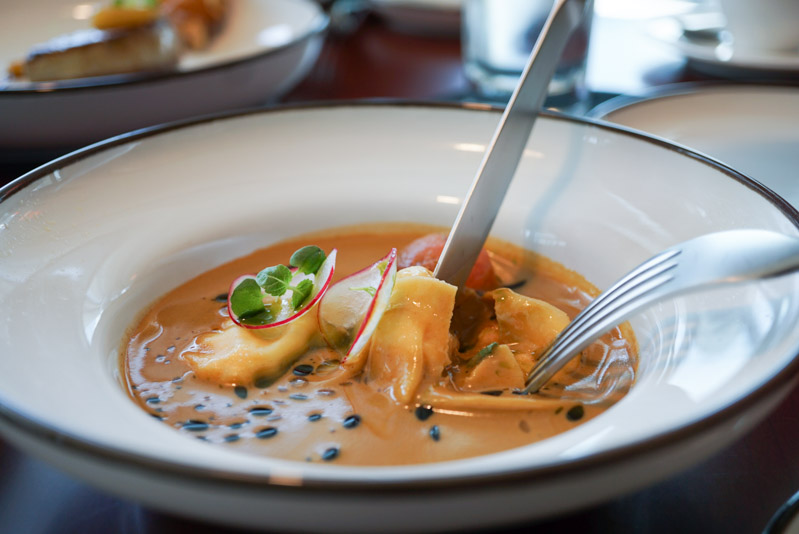 I can’t relate every detail of Chef Guven’s pasta-making process (they lost me after the first few steps), but the gist is: a lot of effort is put into it. The result is a silky-smooth ravioli, stuffed with sizeable lobster chunks. The soup had a nice, rather classic seafood-bisque flavour. I liked this very much. 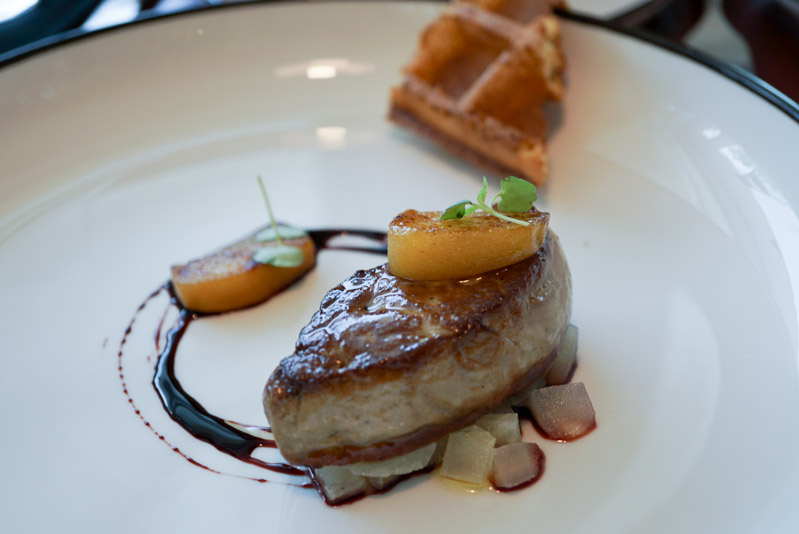 Seared Foie Gras ($21) made me very sorry thinking about the particular goose that laid down its life for this dish, because the wedge of liver on this plate was the largest I’d ever seen. Gloriously velvety and characteristically earthy, the Foie Gras went superbly well with the zesty flavours of the spiced persimmon and apple.

The crisp malted waffle that came with the dish seemed rather out of place to me at first, but when had with the buttery Foie Gras — it all made sense. 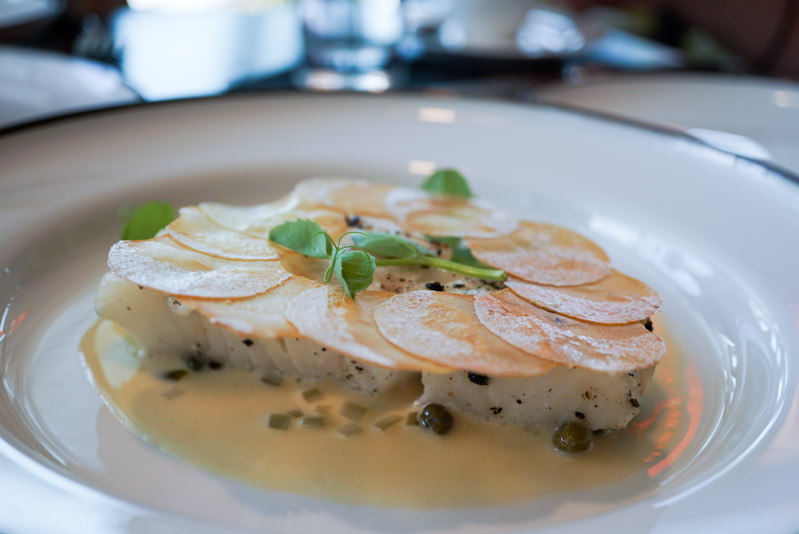 Of the two mains, the Duet of Aberdeen Angus Beef ($56), a grilled tenderloin and a braised short-rib with plum jus, fared much better. The braised short-rib definitely stole the show — sous vide for 24 hours, the beef was lusciously soft and tender, with a concentrated flavour uplifted by the tangy tomato and plum jus. The pureed potato was on the side was also delectably smooth and seasoned to a tee. 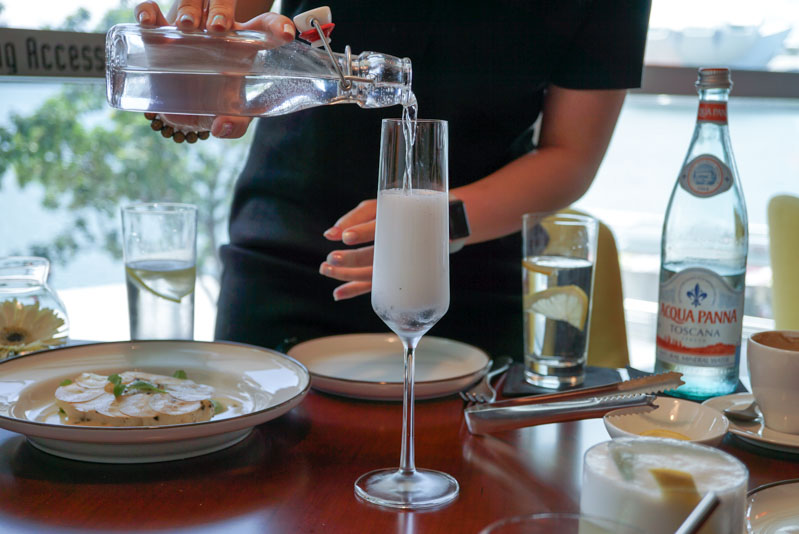 We tried a few of UsQuBa’s drinks: a Negroni ($28), Whiskey Sour ($26) and their signature B.O.B the G.O.A.T ($32). As expected, their drinks were well-crafted, finely balanced and packed a real alcoholic punch.

I liked the B.O.B the G.O.A.T most, a dressed-up gin and tonic with black pepper and blue berries for extra kick. I won’t spoil the experience for you by elaborating on the acronym, but I will say that I had quite a laugh when the name was explained. Dessert came in the form of the Chocolate Delice ($15), a compact slice of chocolate ganache, bailey’s ice cream and mixed berries. The ice cream melted pretty quickly, though I hear this is due to the absence of stabilisers and additives. This seemed like quite a simple dessert, but the pairing of dark, mildly bitter chocolate with tart berries was faultless. 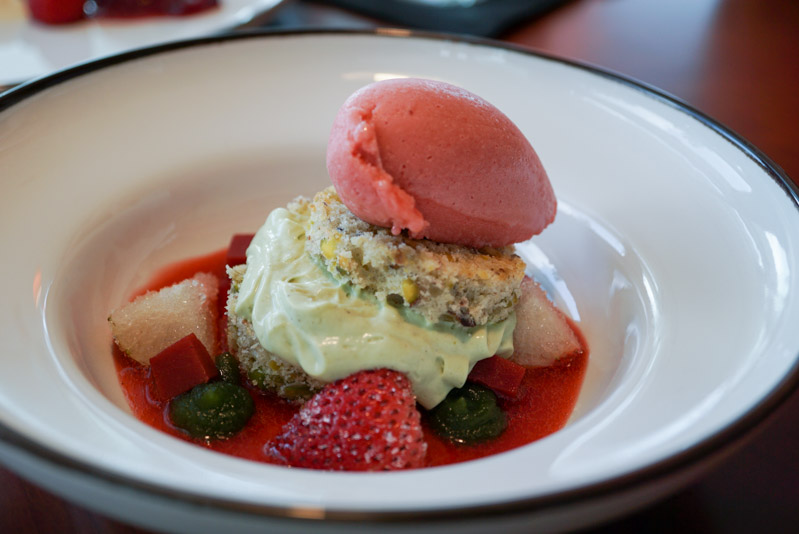 I preferred the softer, more feminine Tastings of Strawberry ($15). The pistachio flavour was quite strong in this dessert, featuring in the cream and crumbly, cake-like biscuit. It was well-balanced by the tangy Strawberry sorbet and slightly sour strawberries. To finish off our meal, we shared a Cheese Platter ($24 for three cheeses) of Caboc, Dunsyre Blue and Arran Cheddar Cheese. My favourite was the Caboc (apparently Scotland’s oldest cheese!) a soft cheese, rolled in oats, that has the texture of fine butter. Paired with a sweet Hungarian Dessert Wine ($30/glass), this platter was sublime. 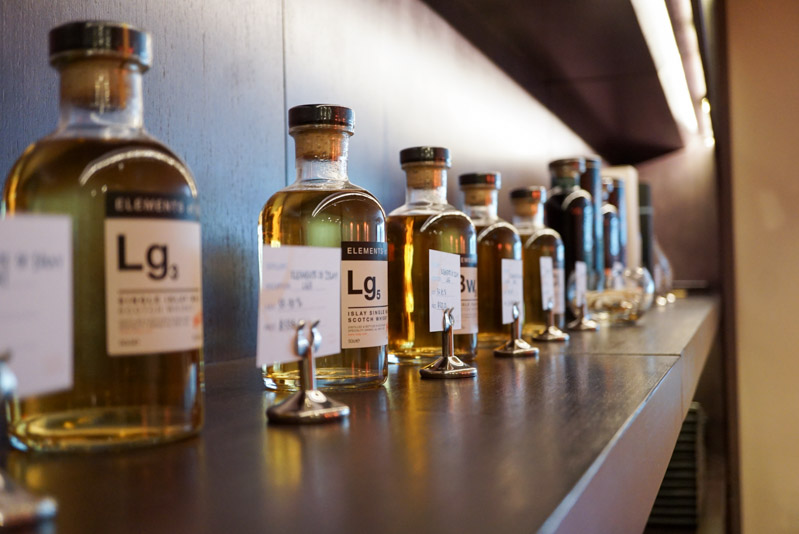 If you’re a whisky afficionado, then you’ll be happy to know that UsQuBa has a retail corner nicely stocked with fine whisky, craft gin, and other unique Scottish products. 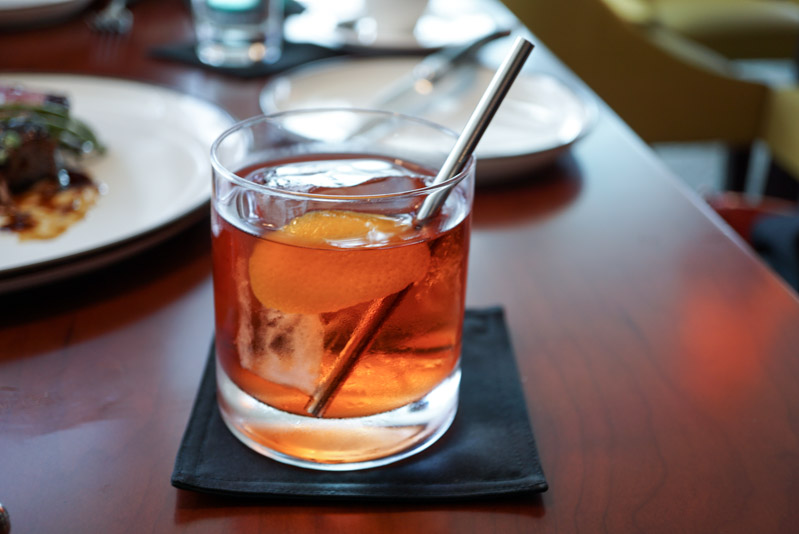 When I first thought of Scottish food, I anticipated more traditional dishes like Haggis. Thankfully, UsQuBa served modern and delicious plates that I honestly enjoyed.

I think UsQuBa is a nice place to savour a meal or a tipple without the stiff setting of other fine-dining establishments. It goes without saying that superior quality of their items entails a steeper price tag.