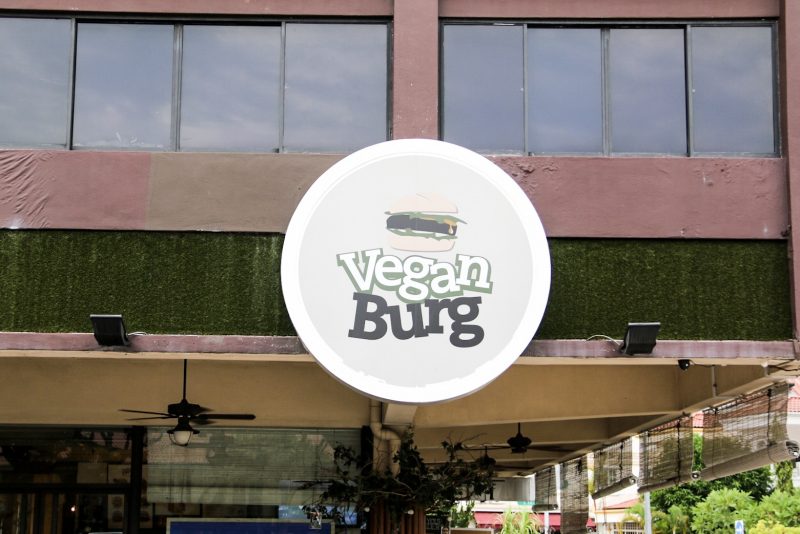 Vegan burgers are on the rise in Singapore, given the new craze of Impossible meat and Beyond meat. But have you tried out the world’s first 100% plant-based burger joint? Launched in 2010, Veganburg opened up the topic of plant-based diets in Singapore.

It now stands to be one of the most popular vegan spots for both locals and foreigners and is situated in Eunos. 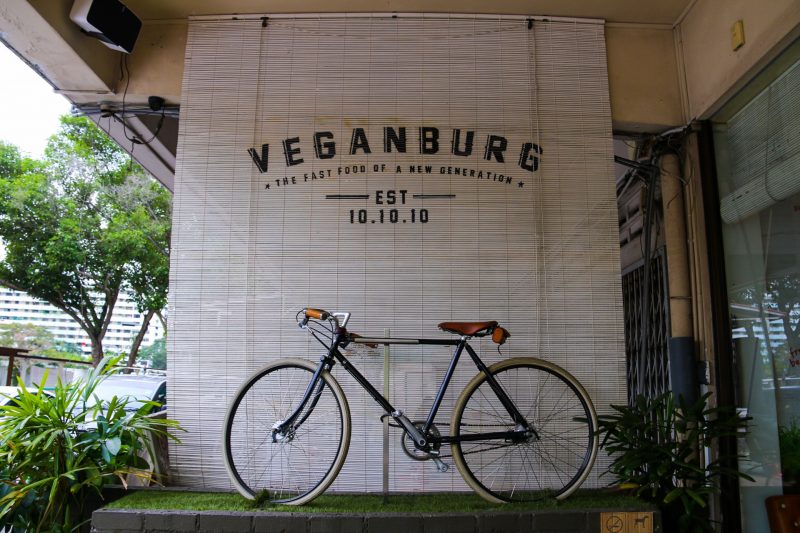 I decided to give vegan burgers a try and made my way to the far East.

The shop has both an air-conditioned and an al fresco dining section. All their tableware is made of recycled wood—another way Veganburg promotes the environmentally-friendly concept.

I had the good fortune of trying out three of their best sellers, namely Tangy Tartar, Smoky BBQ and Chili Krab. I started out with the Tangy Tartar burger (S$9.90). This burger was created to mimic a fish burger, especially with the tartar sauce. Since fish is not vegan, the creators substitute the protein with tofu. I honestly thought I was eating a fish burger. The bar was set high with this burger, and I could not wait to dig into the others. 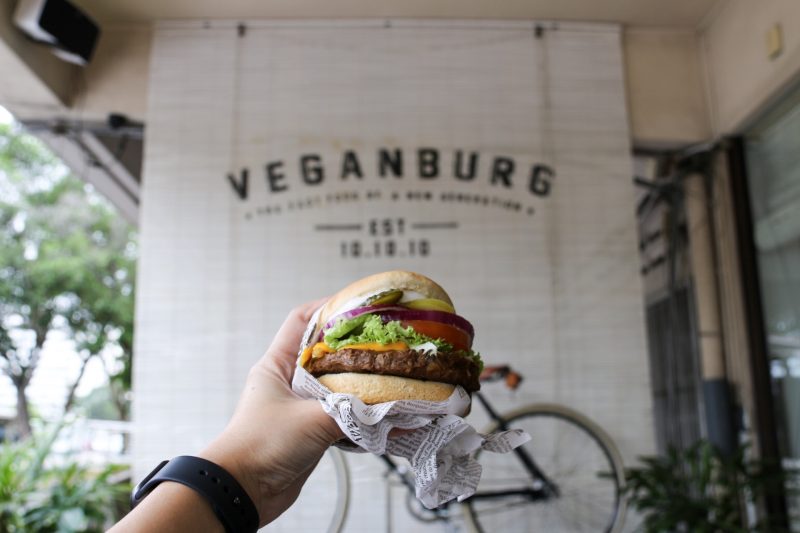 The next burger that I dug into was the Smoky BBQ burger (S$11.90). Similar to a cheeseburger, it has every single component except for the beef patty. To replicate the flavour, looks and taste of beef, the creators came up with a mushroom-based patty.

Unlike the conventional portobello mushroom as a vegan alternative to beef, this is a combination of a variety of mushroom grounded and made into a patty. As such, it creates a more dense and meatier taste. Definitely, it does not exactly mimic the texture of beef, but it did simulate a similar aftertaste.

To those who are passionate lovers of cheeseburgers, give this a shot! Don’t brush it off until you try it. The final burger is what I believe to be the best creation, and that is the Chili Krab (S$11.90). The Chili Krab burger was a creation that was only intended for Singapore’s recent 54th National Day.

Thankfully for us, it became a burger to stay. Made with konjac, the “crab” meat patty is so juicy and had the consistency of actual crab meat. Had I not known that it is a vegan cafe, I would not have believed that it was not crab meat. 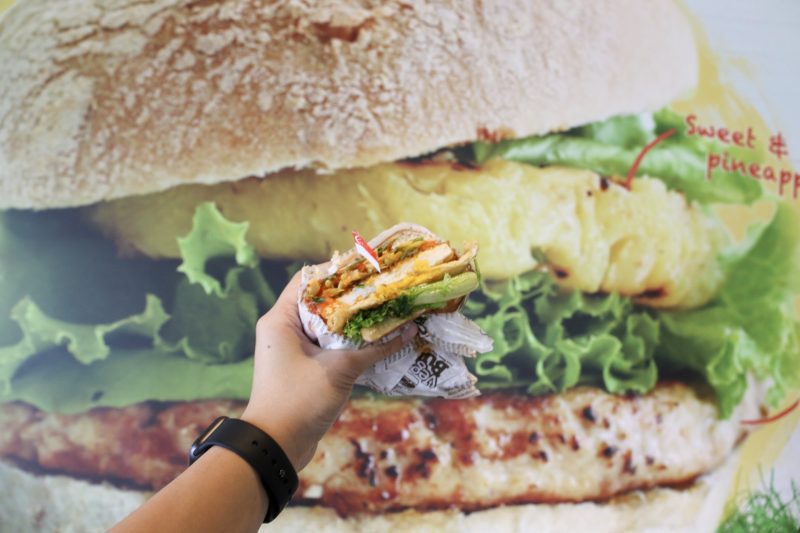 The chef decided to throw in a special bonus for me—a vegan egg. My curiosity was piqued, and I was shocked at the consistency of the “egg”, considering that it was not an actual egg to begin with. The “egg white” was made of beancurd skin, giving it the crisp of an actual egg.

What really took the “egg” to a whole new level was the consistency and texture of the “egg yolk”. The “yolk” is made up of carrots, mung beans, vegan cheese, and soy. I only have one word to summarise the burger—egg-cellent! One of Veganburg’s popular sidekick is the Shrooms Pops With Sambal Mayo (S$5.90). At first glance, it resembles chicken karaage, a popular Japanese fried chicken dish. The batter is made up of cornflour and cereal, which gives each Shroom Pop the crispy texture that fried chicken has.

If you are a fan of sambal, you will love the sambal mayo. The spiciness and creaminess of the dip just gave the whole burger an extra kick. Of course, a burger is not complete without fries! I tried the Loaded Shrooms Fries (S$5.90 for regular, S$9.90 for large). Topped with onions, garlic, mushrooms and aioli, the fries had a deeper depth of flavour that I truly enjoyed.

If you are not a fan of mushrooms, there are other alternatives like White Truffle Fries, or Creamy Garlic Fries. 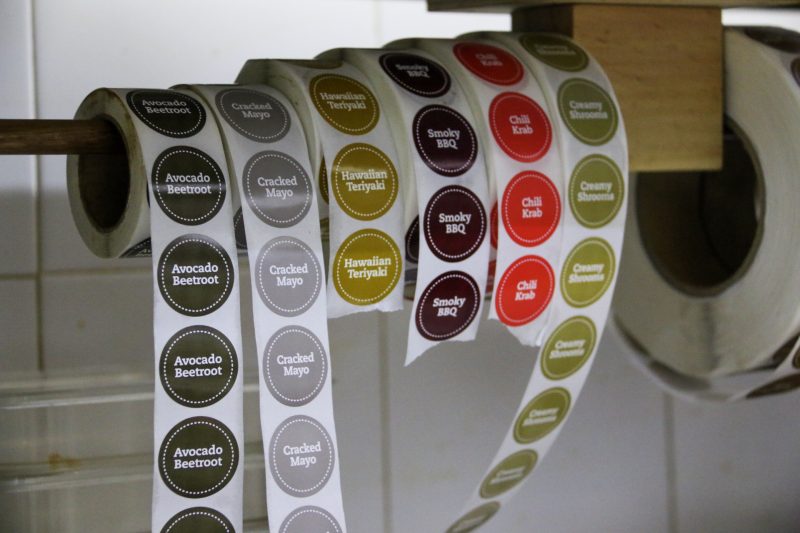 I was fortunate enough to talk to the chef and manager of Veganburg. The creators of Veganburg came up with the concept of having plant-based burgers as they had a vision 10 years ago that one day, the world will run out of meat and it would, therefore, be deemed not a sustainable source of protein.

Even though the concept of veganism was considered unaccounted for 10 years ago, it has grown apparent that the world is changing and with global warming approaching, the world can potentially run out of meat.

In fact, one can step towards a more environmentally-friendly lifestyle by using bio-degradable bags, or reduce their use of plastic straws. Every utensil in Veganburg is made of corn; the straws made of potato starch, and to reduce the use of plastic or paper containers, the burgers are served in nest tins. Every little step counts to creating a happier Earth and a more environmentally-friendly Singapore.

After the meal and the inspiring conversation, I have decided to try out more plant-based options. Just like how the creators of Veganburg believe that every meal is a contribution to a better world, I hope to step towards a better world a meal at a time!

What about you? Have you tried Veganburg? Give it a try today and see if it changes your mind!