Many say kampungs may have disappeared in Singapore, but its spirit remains very much alive in our local hawker centres. Truthfully, I’ve never really felt much about this statement, not until recently when I stepped foot into Circuit Road Food Centre for lunch at Victor Veggie.

80’s Hokkien songs were playing on the radio as I neared the stall and saw a group of uncles and aunties crowded together chit-chatting and laughing as they skilfully wrapped otah and threaded satay skewers. 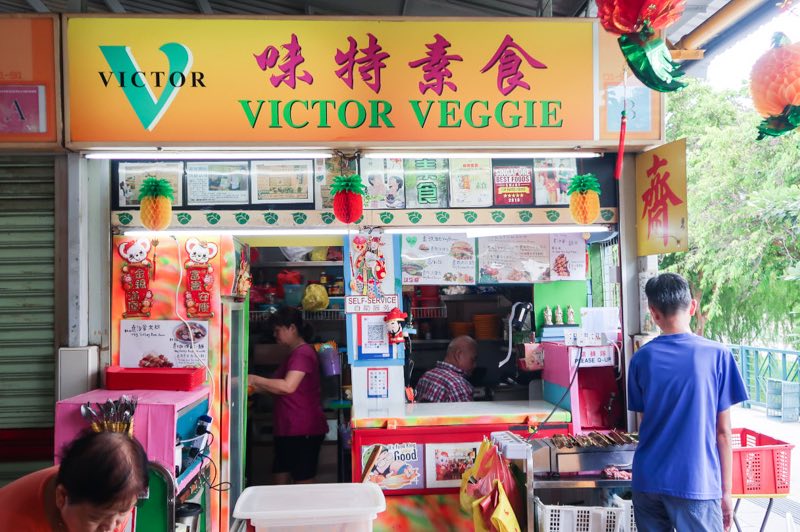 Just as I found a seat, an uncle holding a tray of freshly cut watermelon came to me and asked “Xiao mei, you want watermelon?”. Shy and slightly surprised, I politely declined as I walked up to Uncle Victor to get my orders in.

Mock meat was never my cup of tea as I have had really bad tasting ones over the years. However, I’ve heard so much about Victor Veggie, I knew I had to try for myself. Helmed by Uncle Victor, whom I really thought looked like a smiling Buddha, Victor Veggie has been in business for more than 40 years selling vegetarian hawker fares.

Initially a vegetarian due to his religion, Uncle Victor started his business as a hawker when he was 24 years old. Since then, he has been advocating vegetarianism in Singapore, more importantly for sustainability and environmental reasons. Thus, in an attempt to make vegetarian options more appealing to the locals, Uncle Victor started researching and re-creating food that is familiar to our palates. 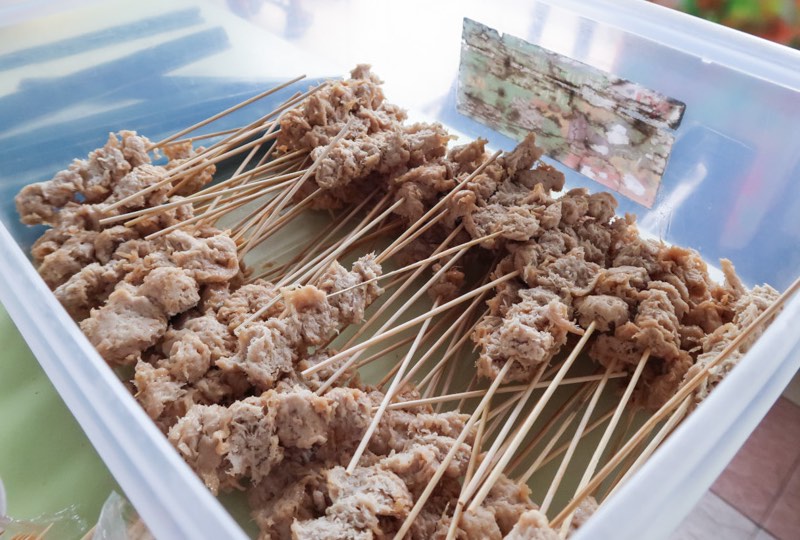 Proudly known for their Vegetarian Otah (S$0.80 each) and Satay (S$0.80 per stick, min.10 sticks), which are usually sold out by dinner, both these snacks were wrapped and skewered on the spot, then freshly barbecued a la minute after being ordered. 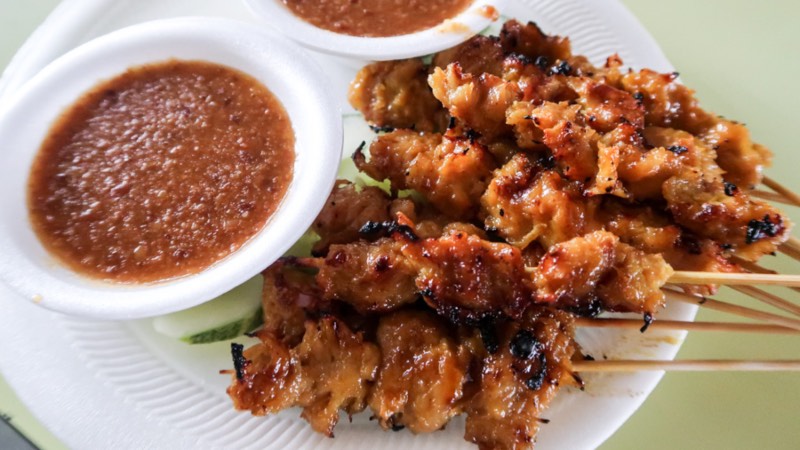 Upon receiving my plate of satay, I was in shock as I totally could not tell that the skewers were not made of meat. The “meat” had charred burnt bits on its sides, giving the satay a delightful burnt crunch. Texture-wise, its chewiness and mouthfeel were closest to chicken, probably even more tender than the real deal. 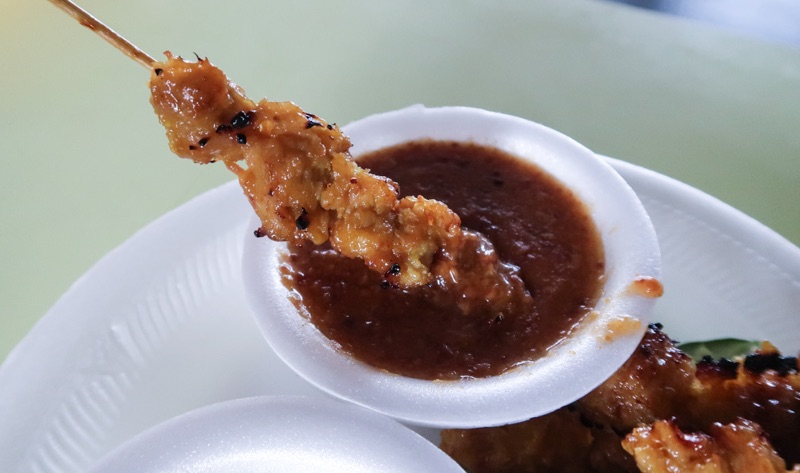 The satay at Victor Veggie had a nice smoky sweetness making it tasty even when eaten alone. Its flavours were further enhanced by the nutty peanut sauce that when paired together intensified its richness. Made with soy protein, there was certainly a difference in the aftertaste. Yet, I was somehow not affected by it. In fact, I fell in love with the Vegetarian Satay so much that I even ordered extras for takeaway. I prefer my otah to be spicy and of a denser texture. That’s probably why Victor Veggie’s otah did not impress me as much. To those who dislike otah for their strong fishy taste, this will be perfect for you. 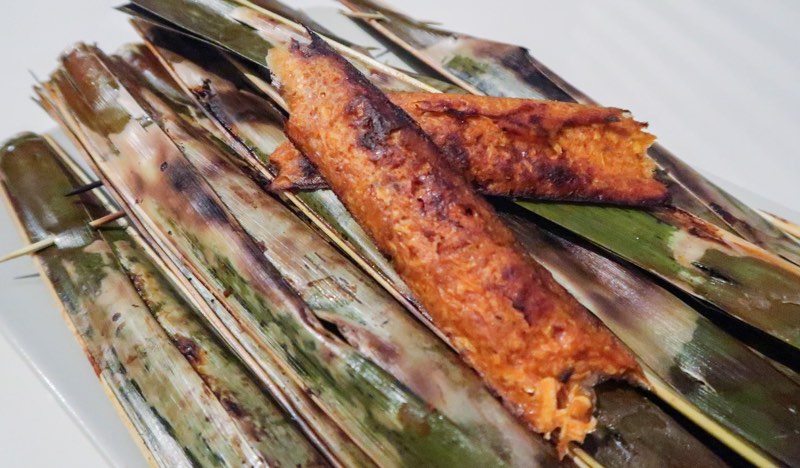 Despite not being made out of real fish meat, there were chunks of soy protein scattered amongst the otah paste, giving it a very similar mouthfeel to regular otah. Nonetheless, I would still prefer it to be a tad bit spicier for that extra oomph. Thankfully I managed to get my daily dose of capsaicin from the bowl of Curry Noodles (S$4) which Uncle Victor mentioned was his new creation alongside the Vegetarian Bak Kut Teh (S$4.50). 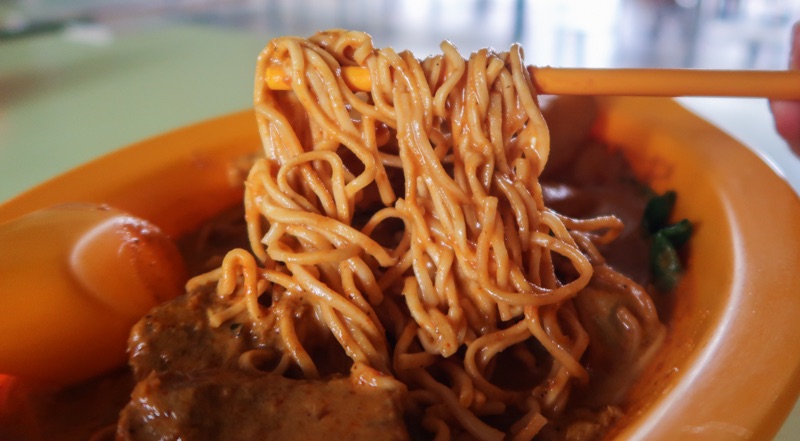 My bowl of Curry Noodles was almost filled to its brim with wedges of potatoes and mock ribs. Having set aside for at least 15 minutes, I was glad the gravy did not dry up. Although the noodles were a little swelled from soaking up the gravy, there was still a decent amount of curry in the bowl that I was able to enjoy as I slurped on the noodles.

The curry sauce had a combination of savoury and sweet notes from the use of turmeric, cumin, cinnamon, and cloves. Besides that, a higher ratio of chilli mix to coconut milk also resulted in a gravy that was more piquant and less creamy. 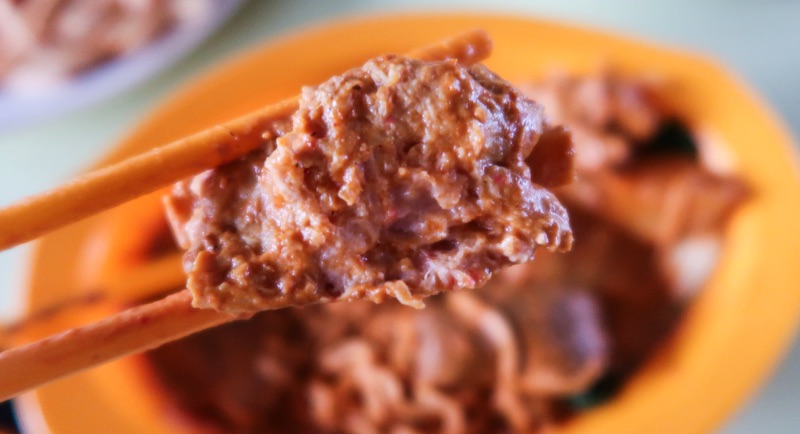 If you are hesitant to try mock meat made from soy protein, yet curious about its taste, I would recommend you to try the mock ribs together with the curry sauce. The heat and spices from the gravy were able to successfully mask the aftertaste from the soy protein, yet the texture remained, making it a weird but delectable combination when eaten with the noodles. 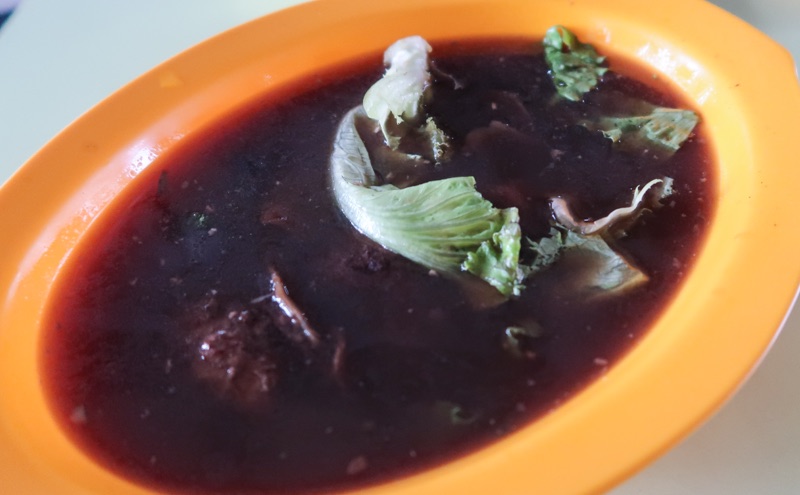 Finally, I ended my meal with the Vegetarian Bak Kut Teh soup. This bowl of soup might seem mediocre and unappetiz=sing at first. However, beyond its looks was a hearty bowl of herbal soup that warmed me from the pit of my stomach.

Bak kut teh lovers will know that garlic is an important ingredient that completes the dish. Uncle Victor, however, does not use garlic or onions in his dishes due to religious purposes. Therefore, in order to re-create the authentic taste of bak kut teh, he uses several herbs and spices to give the soup its fragrance and wholesome taste.

Without the use of pork ribs, the Vegetarian Bak Kut Teh was less oily and had a cleaner flavour.   Its herbal nuances were subtle, with dry and sweet notes (what Chinese would describe as gan tian) that I very much enjoyed. 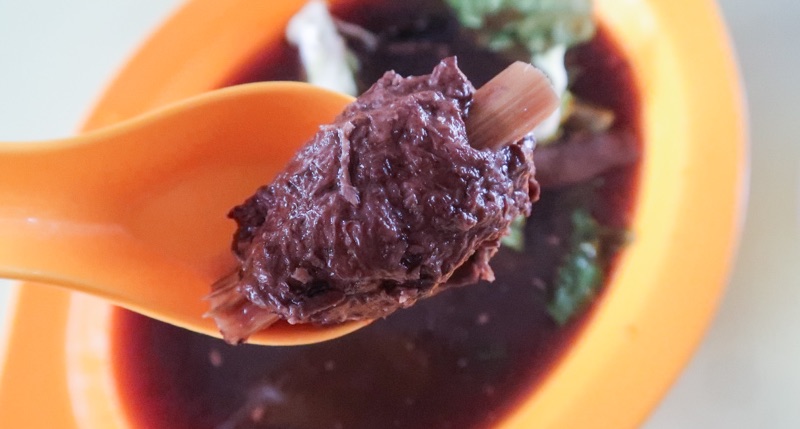 Representing the renowned pork ribs found in every bowl of bak kut teh was Uncle Victor’s very own interpretation—mock meat wrapped around sugar cane. “Sugar cane represents the bones. Ours more special; can be eaten and it’s sweet”, commented Uncle Victor, smiling proudly as he watched me suck on the sugar cane. The sweetness paired with the mock meat was somewhat unusual but with that being said, I also applaud Uncle Victor for his creativity and attention to the slightest detail. Just as I was ending my meal and preparing to leave, an aunty from the opposite stall, Yu Long Vegetarian Food, handed me a plate of vegetarian Fried Guo Tie (S$7). Uncle Victor smiled at me as he told me to try the gyozas whilst they were hot. Apparently, Uncle Victor was the one who taught Aunty Yu (owner of Yu Long Vegetarian Food) how to make the vegetarian dumplings and encouraged her to convert her shop to sell vegetarian food when her previous fish soup stall wasn’t doing well.

The gyozas were pan-fried to a nice crisp at its end and when bitten into, juices of the mushroom and black fungus mixture oozed out, filling my mouth with its earthy fragrance. When paired with the sharp, slightly pungent black vinegar, a nice tangy acidity pierced through, resulting in a delectable snack. 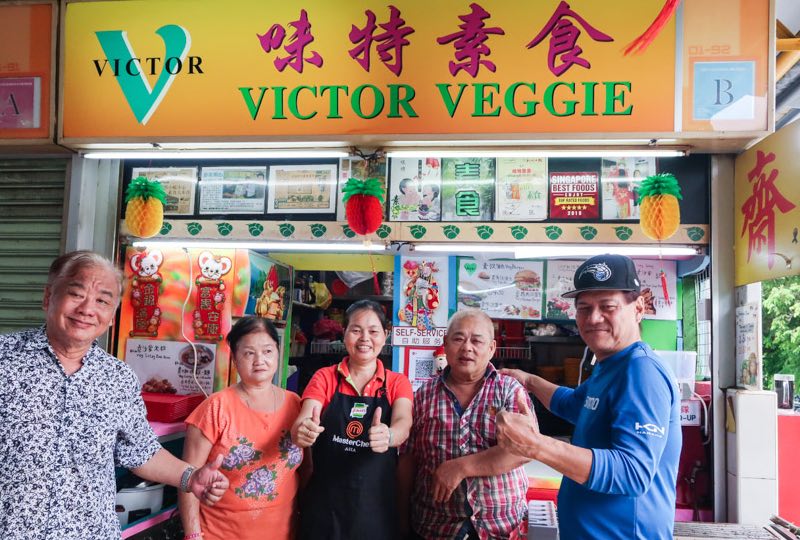 Vegetarian food might not be appealing to many and the dishes at Victor Veggie are certainly neither fancy nor over the top. However, I truly agree that Uncle Victor’s stall is a cut above the rest in terms of making mock meat taste real.

The food (aside from the satay) might not necessarily leave a lasting impression, but trust me, your trip to Victor Veggie will be worthwhile especially when you get to interact with Uncle Victor and his friends! New in town: By Xuan, Geylang Road — Chinese food with...