Something about having a belly full of steaming hot congee and entering a blissful food coma on a lazy Sunday afternoon makes me feel really satisfied. If you’re like me and you appreciate a solid bowl of porridge, you’ll love Weng Kiang Kee Porridge. Tucked away in a corner of Chinatown Food Complex, this stall is run by Chef Charlie Chang, an ex hotel-chef who has worked in five-star hotels both locally and internationally. Some of these hotels include Mandarin Oriental, Ritz Carlton, Setai in Miami and Grand Millenium in Beijing, in which he sought to introduce Asian regional dishes at a global level.

His decision to open this stall came after Joe Pork Porridge, the original owner of the unit he now occupies, announced that it was closing. Being an avid fan of Joe’s porridge, Charlie wanted to continue its legacy in the same Hainanese style and decided to bid for the stall. A few months later, Weng Kiang Kee Porridge was born, run by Charlie and his wife Philo. At Weng Kiang Kee Porridge, they use premium rice grains to make their signature thick porridge, and the couple comes in at 5am every morning to make the porridge base. Each bowl of fresh porridge is individually prepared in its own pot over the six stoves in their stall. Philo told me that they always sell out by around 1pm even before their closing time, since they cannot keep their porridge for the next day.

The stall is located in the Green Zone (幽灵山庄), and I can’t deny that it was quite difficult to find. This also means that they don’t get much business after the lunch crowd leaves, which explains their short opening hours from 7am – 2pm. When I arrived at the stall at 9am, there weren’t many customers at the time. I noticed that most of the crowd seated around that zone were mostly the elderly, enjoying a leisurely breakfast with their partners over a bowl of warm porridge. 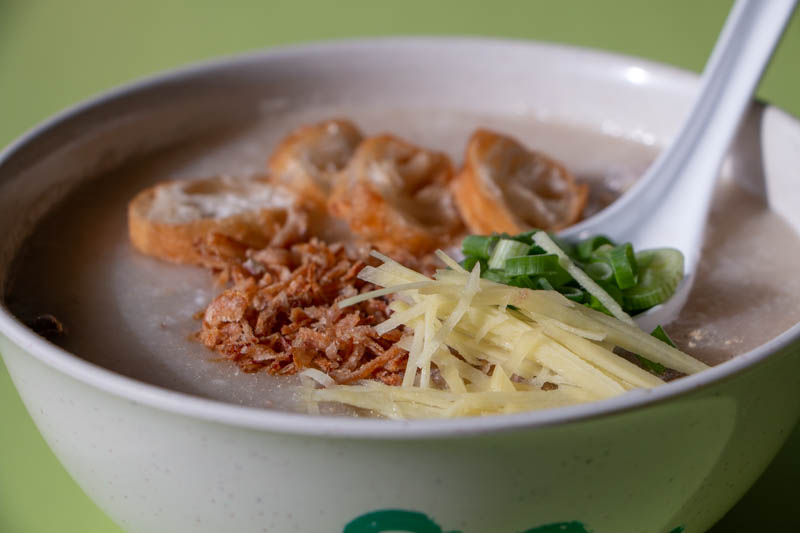 I eagerly dug into my first bowl—their Signature Porridge (S$4.50) with Egg (additional S$0.50). At first glance, there didn’t seem to be much to the slightly off-white porridge, except the usual garnishings of ginger, spring onions, you tiao and fried shallots. Oh boy, was I wrong.

This porridge was bursting with so many ingredients under the surface, it was hard to keep count. Before eating, I stirred the porridge to break the egg and mix it well with the different parts inside. The richness of the porridge filled my mouth with the first spoonful—flavourful and savoury with the aftertaste of egg. The consistency was perfect; smooth, not too thin or thick, and each mouth left me craving another spoon. 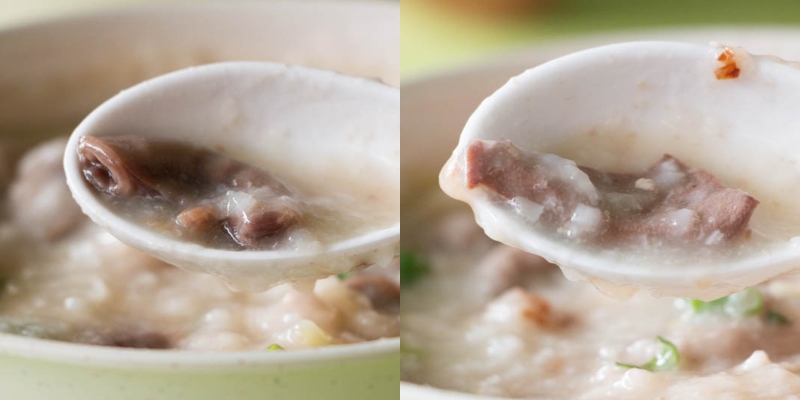 Here’s what went into this hearty bowl: mixed pork with sweet intestine, liver, fish, cuttlefish and century eggs. The pork meatballs were tender and substantial, leaving a slightly salty but not gamey taste on my tongue. The lean meat was sliced thinly and it was softer than I’m used to—not dry at all and very tasty. The fish chunks were well-seasoned and succulent, along with the skinny cuttlefish pieces that added extra texture and chewiness.

The intestines were clean, subtly sweet and addictive. The liver was a muted dark pink, slightly tough and chewy, accompanied by that strong flavour unique to liver. The mouthfeel created by the combination of these ingredients just in this one bowl of porridge—grainy, rough, smooth, soft, springy, chewy—makes me crave it even now while I’m writing this. 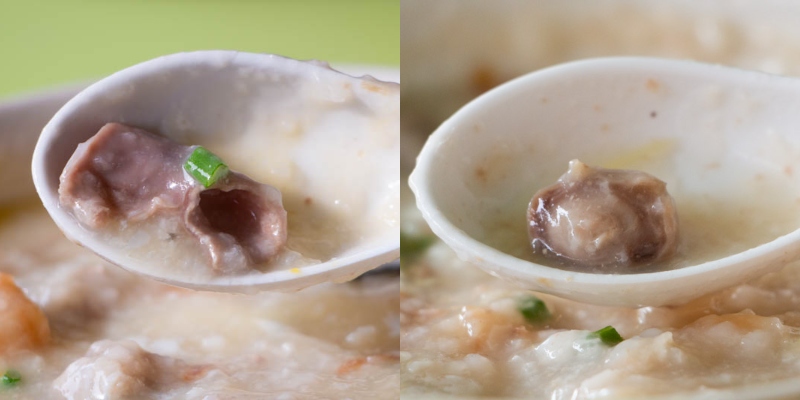 Now, imagine what the Premium Porridge (S$5.50) tastes like, which has all the same ingredients as the Signature but with additional ‘birth intestines’ (fallopian tubes) and abalone.

The birth intestine was very soft and pillowy, yet firm enough that it didn’t lose its shape. There was a slight crunch when I bit into it, and it was somewhat sweet and clean-tasting. The abalone was tender and chewy, with that distinct salty flavour. 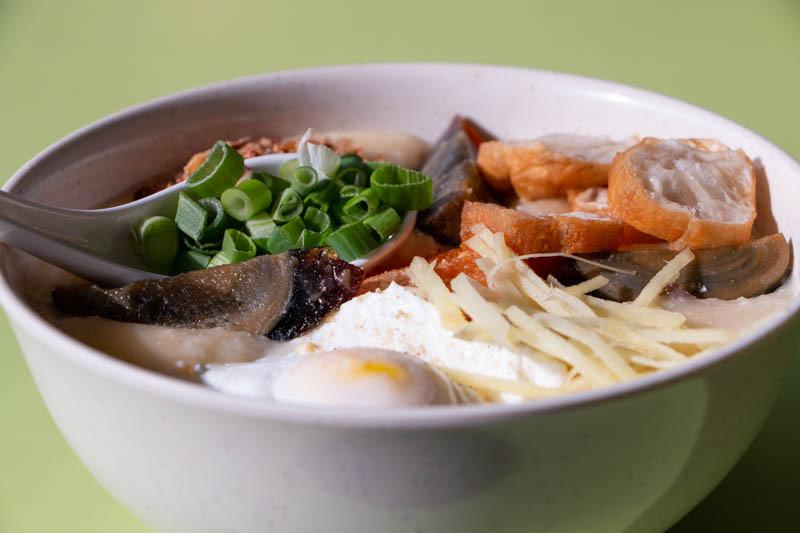 Another one of Weng Kiang Kee’s trademark porridges is their Triple Egg Porridge (S$4); as its name suggests, it features three different types of egg—poached egg, salted egg and century egg. The eggs are used to decorate the surface of the porridge, creating a tri-colour treat that caught my attention. 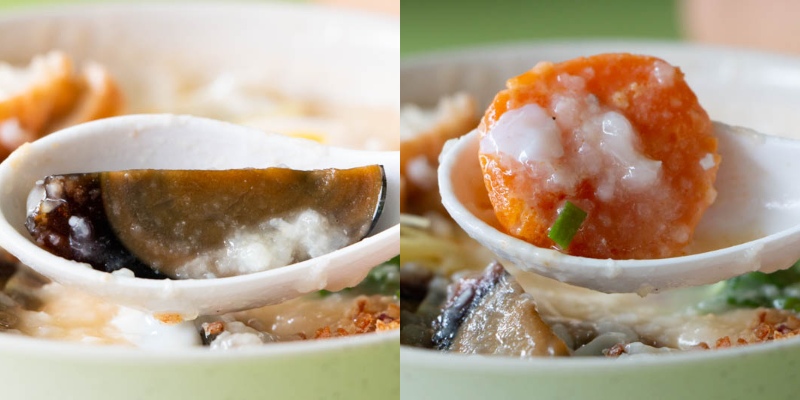 The century egg was presented in large slices instead of small chunks within the porridge, and its bold and pungent taste cut through the thickness of the congee. The earthy flavour profile of the century egg was emphasised by the contrast of the creamy porridge when the poached egg was mixed in. The bits of salted egg scattered within the porridge also helped to create more distinct flavours with its unique salty and sharp taste. Lastly, I tried the Century Egg With Lean Meat Porridge (S$4), which was as simple as it sounds with only those two ingredients, and I noticed that the consistency of this porridge was thicker compared to the other bowls I had tried. A generous portion of century egg and lean meat was served and I thoroughly enjoyed every bite of the porridge with how tender the meat was and the boldness of century egg.

The combination of fresh, unique ingredients and rich congee made for an extremely satisfying and filling meal, and the savouriness of each component was offset by the creaminess of the porridge. My favourite has to be the Premium, with its perfect consistency and liberal ingredients, for such an affordable price of S$5.50. I would definitely suggest adding an egg (S$0.50) to your porridge for extra creaminess.

Previous articleDIY Your Own Cocktails at Home With Rojak & Chendol Gin From COMPENDIUM
Next articleFusion Dumplings: Hearty Beef Dumplings & Other Authentic Russian Food in Maxwell Chambers