Nowadays Korean chicken wing outlets are everywhere. Tired of the same few flavours? What do you do when you still really want to eat chicken, but not in the usual soy garlic or yangnyum marinate?

Perhaps it is time to switch up – try something different like American wing flavours. How about the infamous buffalo wings or some lemon pepper seasoned wings for a change? 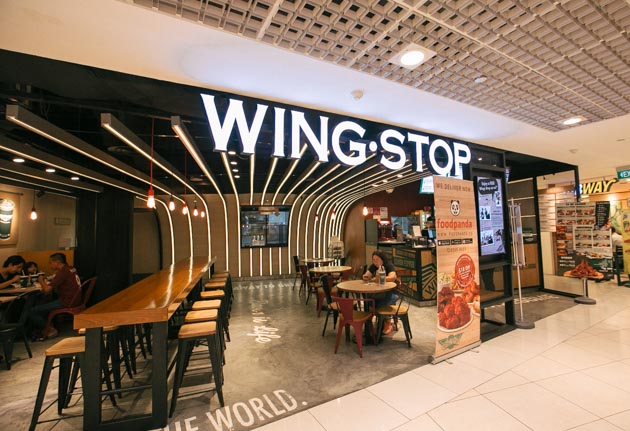 America’s current number 1 Chicken Wing restaurant chain is here to give you and your chicken-loving asses, 11 different flavours to indulge in. The Americans really adore Wingstop. How do I know?

Wingstop is one of the fastest growing brands in the restaurant industry in the U.S, according to Nation’s Restaurant News. Armed with flavours like:  Atomic, Garlic Parmesan, Original Hot, Louisiana Rub, Hickory Smoked BBQ, and Hawaiian – Wingstop aims to take Singapore by storm too.

Though fast in its expansion, Wingstop isn’t fast food!

Wingstop holds freshness and quality food as their pride. All their wings are only cooked upon orders so you can be guaranteed fresh, piping hot wings straight from the kitchen to bring justice to your chicken.

And no, don’t worry, they’re not double fried or heated up just when you want it, Wingstop fries all your wings from complete rawness to crispy goodness only when you order. 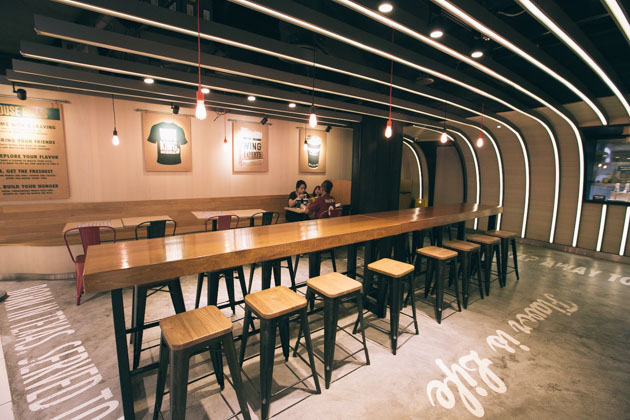 So if Wingstop isn’t fast food and neither is it a full service restaurant…what exactly is it?

Wingstop brands themselves as a fast casual restaurant, where they deliver the same high quality food as full-service dining, without having to take the same amount of time to be served. So we were invited to have a taste of this fairly new concept in Singapore that proved extremely effective in the U.S and see if this self-proclaimed “Wing Expert” is worthy of that title. 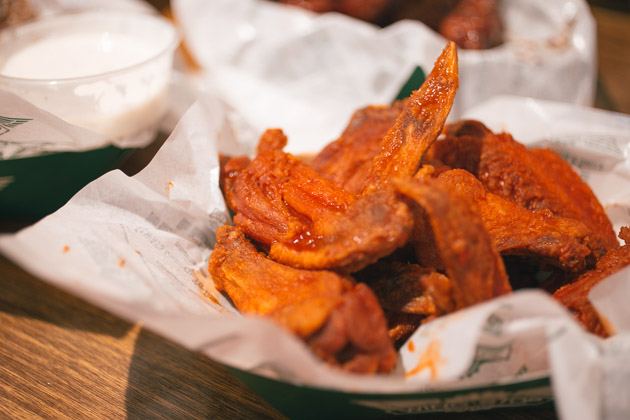 A Best-seller in the U.S, you know this buffalo wings recipe is legit with that biting vinegary and peppery taste.

This however, is a very enjoyable plate of buffalo wings not spiced at a murderous level. Their Original Hot is only at Level 2 of their spiciness chart, hence it was a walk in the park for my taste buds and a relief for the pain receptors in my tongue. Apart from wings, Wingstop offers boneless chicken wings, great for people who don’t want to get their hands dirty. The Hickory Smoked BBQ Tenders was Juicy Boneless Chicken thigh meat slathered in that familiar smoky intoxicating BBQ sauce. Something very familiar to most of us. 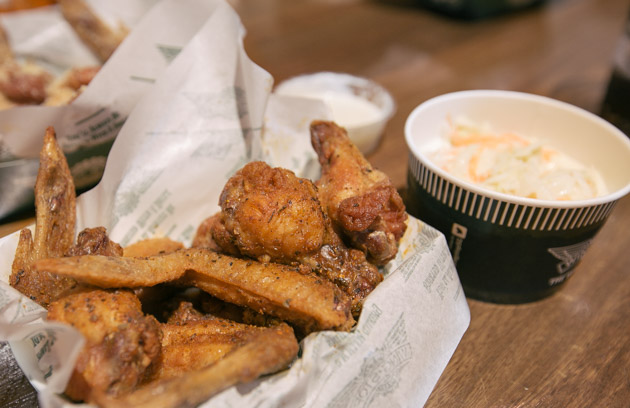 One of Wingstop’s best sellers in Singapore, the Louisiana Rub uses a clever combination of Cajun Spices and other seasonings to dry-rub the chicken after deep frying it. The end result is crispy golden brown wings coated with an interesting blend of flavours.

Despite the deep frying, Wingstop’s chicken are not that oily because the meat is not battered up before frying unlike many other places. Hence, without the extra layer of flour absorbing the oil, their chicken is less oily. You can also forget about that sickening sensation after ingesting too much oily batter. (Whew thank goodness!) 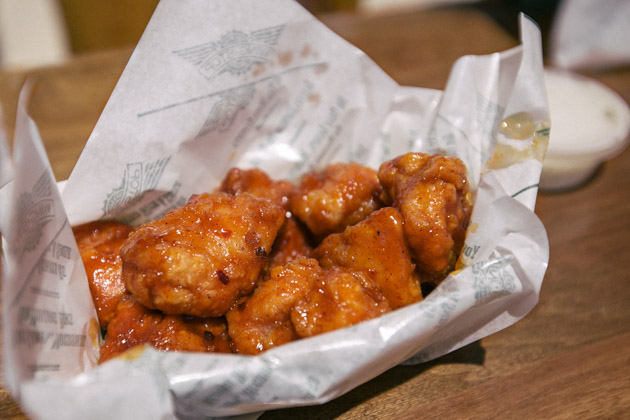 Anything mango probably wouldn’t go wrong and precisely nothing was wrong with this saucy flavour. Except maybe the seemingly unending masochistic need for us to put our tongue through pain.

In the Mango Habanero, taste sweet lovely mangoes from the tropics then, the fiery kick so slyly hidden in that innocuous mango flavour ambushes you. At level 4 of the spiciness scale, it was making me break out into sweats. Needed many gulps of my iced drink to soothe the heat.

It was at that exact desperate moments that I was suddenly regretting agreeing to try ‘Atomic’, which is at level 5, Wingstop’s spiciest flavour.

To prep myself Atomic and also take a break from an unending series of wings, I decided to cleanse my palate of all sorts of spiciness with some sharing sides. 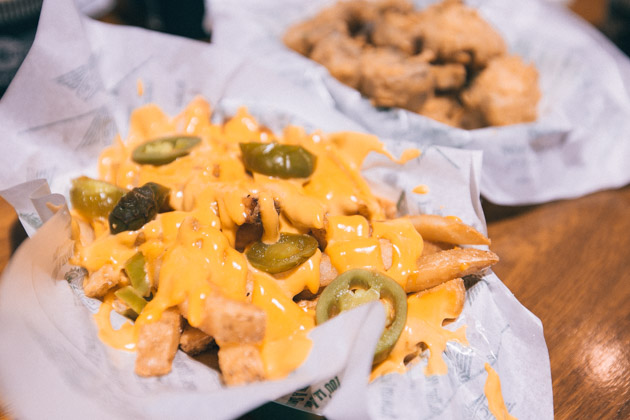 Shiooooook. The load of cheese sauce was savoury and sweet, working perfectly with the zesty and tangy jalapenos. Would be heavenly if the fries were crispier but still, was a super delish side. I mean duh, it’s cheese fries….. Definitely better than KFC’s. 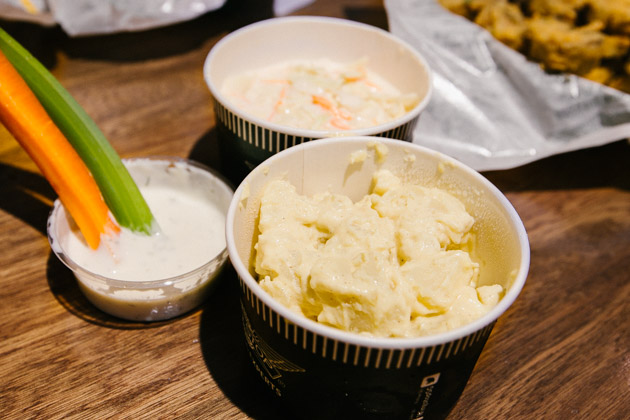 These cooler sides will be the most effective edible fire extinguishers you can find on Wingstop’s menu. So you might want to keep them close at hand when attempting higher level spicy flavours like Mango Habanero and Atomic.

Alternating between one wing flavour and fresh vegetables to another flavour is advisable since the raw freshness seems to refresh your taste buds and prevent overlapping tastes.

Would recommend at least one of these so that it kinda, hopefully, balances out the guilt from your wings indulgence. Dine like yin and yang, so please eat your vegetables. 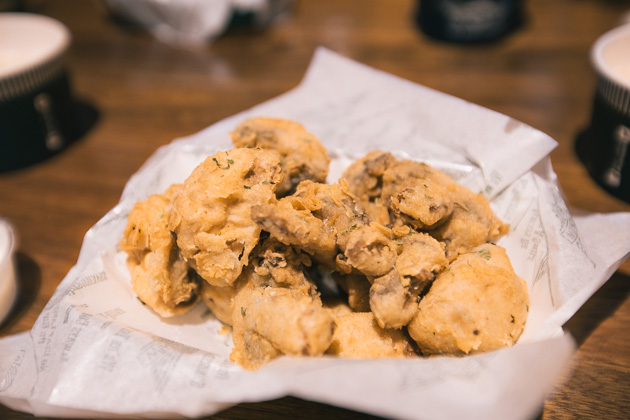 As someone who typically doesn’t enjoy mushrooms, these still had me continuously stuffing my face with it. Not because they were fried I swear! The mushrooms were round and juicy without that overbearing mushroom odour while the lightly salted batter adds a layer of fragrant crisp to it. 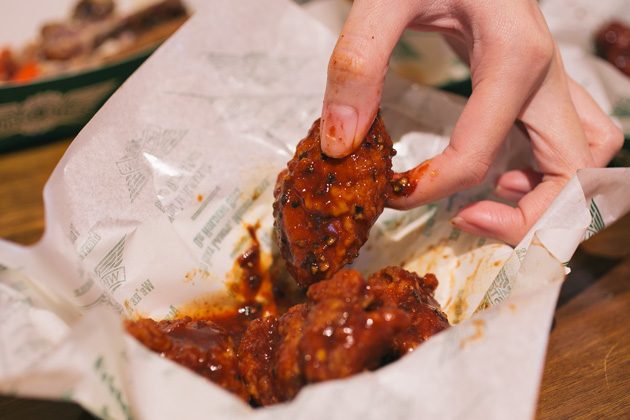 So after the prep and washing my palate of previous spiciness, I embarked on the Atomic experience. Take a minute to admire that deep rich shade of red that’s ready to murder in about a few seconds. With visible flecks of chili and big beads of pepper, it looked hella intimidating.

The Atomic, at level 5 on the spiciness level, is the spiciest flavour Wingstop has created. Wingstop usually actively discourages first-timers or people whom are not used to spicy food from ordering it before they taste a sample of the sauce.

That’s how confident they are of their Atomic flavour. Atomic is so infamous that there is actually a challenge for it. Many people on YouTube take part in the Wingstop Atomic Wings Challenge, where they attempt to eat as many Atomic wings they can in 10 minutes, similar to the Korean spicy noodle challenge.

The Atomic sauce was a straight up knock out; didn’t manage to taste much before the fire kicked in. It was slightly vinegary and very peppery and….. that’s all I could get before my taste buds died momentarily for about 15 minutes. Yes, this takes about 15 minutes for your mouth to recover.

Although it wasn’t as spicy as some of the ones I’ve had at Korean wing restaurants, it was still immensely formidable.  People who enjoy ridiculously high levels of buffalo wings or the korean spicy noodles, you’d probably enjoy this too.  Probably the first time and last time I’d try it and one piece was definitely enough. 8/10 on the murderous scale. 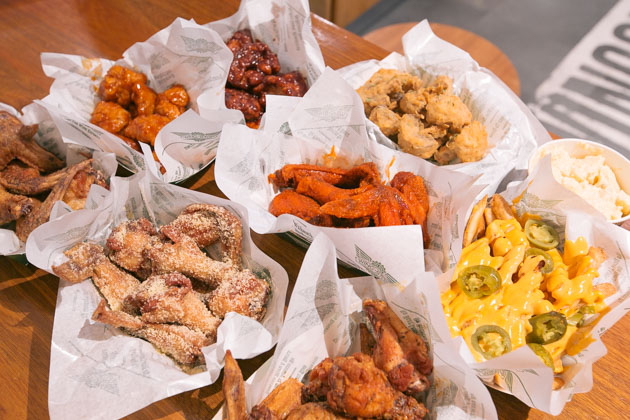 Wingstop is definitely different from the majority of wing specialist stores out there with their large variety. From their origin, multitude of flavours  and dedication towards serving piping hot food, they set themselves apart.

They also have many different deals, there are bundle sets excellent for sharing as they are  much more valuable. For those who prefer their wings with carbs other than fries, Wingstop offers Wing Burger Combos and Rice Box Combo –  for when you’re feeling especially Asian.

On Weekdays from 11 am – 2pm, you can get free upsizes for both your beverage and side. What’s more, Wingstop even has a Happy Hour session for their boneless wings! With so many great deals, just grab your chicken-loving friends and head down to Wingstop. You can even take on the Atomic Challenge with your friends. Knock yourselves out at Wingstop!

Wingstop delivers to your home! Check out our Deliveroo Promo Codes.

*This post was brought to you in partnership with Wingstop