A pioneer in the halal cafe scene, the early tales of (working title) kicked off with the cafe starting out as nothing more than a breakfast and brunch spot for guests staying at The Shophouse Boutique Hostel. With time, as tables turned, (working title) grew beyond its limitations, evolving into what it is today—(working title) Burger Bar. Newly situated just a stone’s throw away from its previous location, the burger bar is tucked snuggly beside its sister cafe, Tipo, along North Bridge Road. Decked in a good mix of eclectic and industrial decor, disparate styles and juxtaposing textures of its furniture came together cohesively to emanate a chill and cosy vibe.

With 90s music from the likes of Usher and Chris Brown playing from the stereo, this place immediately won over my heart—five out of five for ambience. 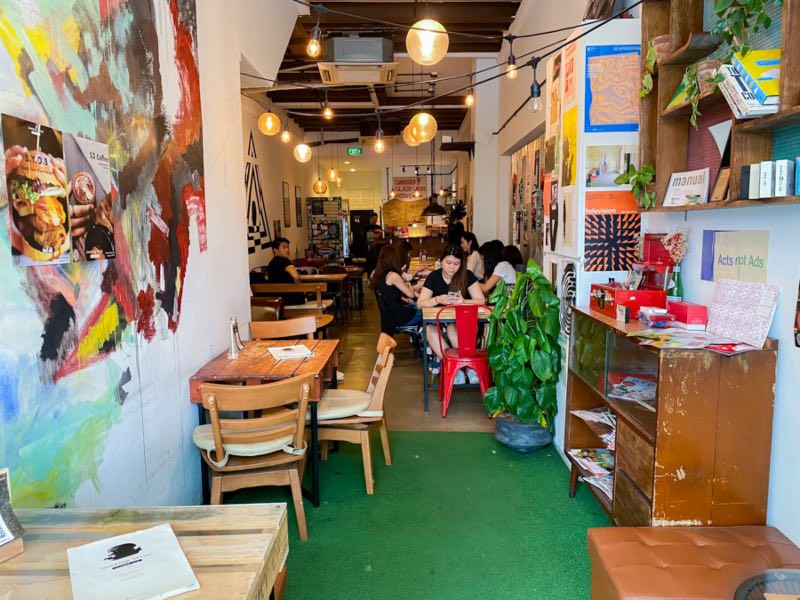 Whilst retaining some of their crowd favourites, the menu items were expanded to include a wider variety of hand-made burgers catering to burger-holics who are looking for a place to unwind and have a good time. 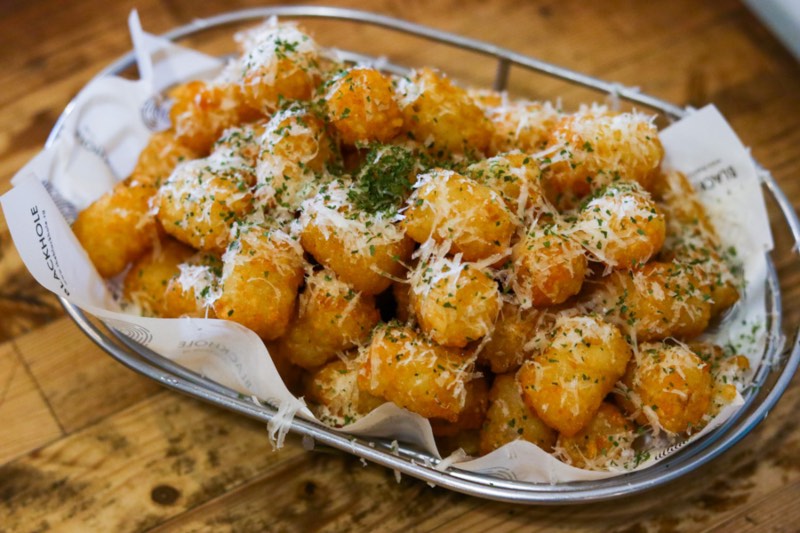 Before diving into the main stars of the burger bar, we started off with the Truffle Tater Tots (S$8.90), (working title)’s signature mini hash browns drizzled with truffle oil, topped with shaved parmesan. 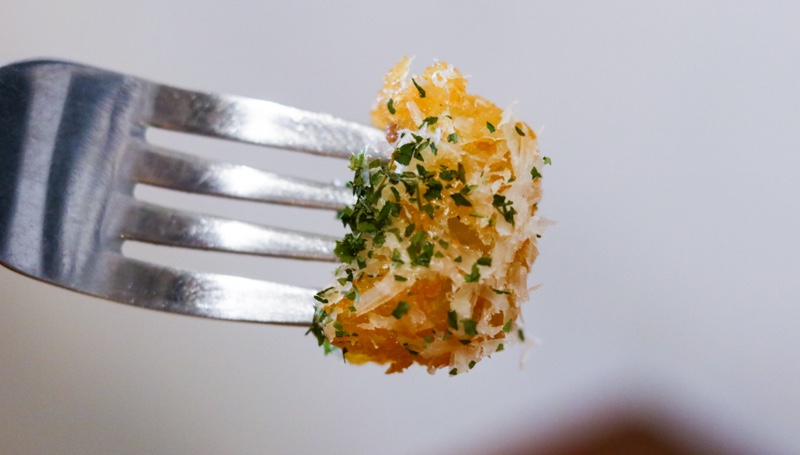 A safe option that will never go wrong, the tater tots exuded the fragrance of truffle oil even before the dish arrived at our table. I was pleasantly surprised that the earthy truffle flavour turned out to be more subtle than I expected, which was in my opinion, a good thing since it was not too overpowering.

Crisp on the outside, yet soft inside, these mini hash browns were so light and addictive, making for an ideal conversational snack. Having had Ribena almost every day growing up as a kid, the child in me beamed with excitement when I saw Ribena Wings (S$9.90) on the menu. (working title) Burger Bar’s rendition of this childhood drink-inspired dish was chicken drum sticks coated in spiced batter before being deep-fried and drenched in Ribena reduction. 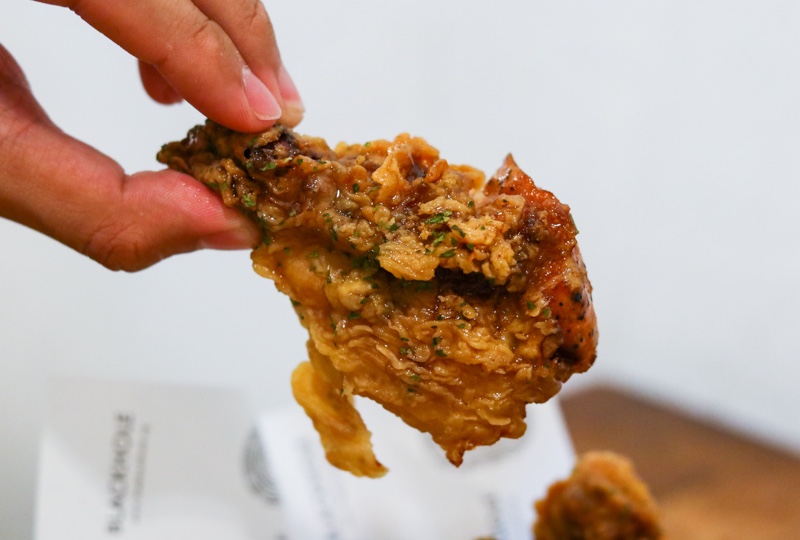 Instead of smelling like the blackcurrant drink itself, the Ribena reduction gave off a hellacious artificial sugary scent (think Fanta Grape) that was a little off-putting. In contrast to how it smelled, the sweetness was only limited to the outer layer of the chicken skin, failing to soak through and be incorporated into the meat. Yes, the meat was indeed soft and tender, but it lacked the flavours which were promised in its name.

Moving on to the main reason for our visit: burgers. We were a little spoilt for choice, having 13 burgers to choose from. After some internal battle with the greedy devil inside us, we decided to opt for three burgers with different meat options. 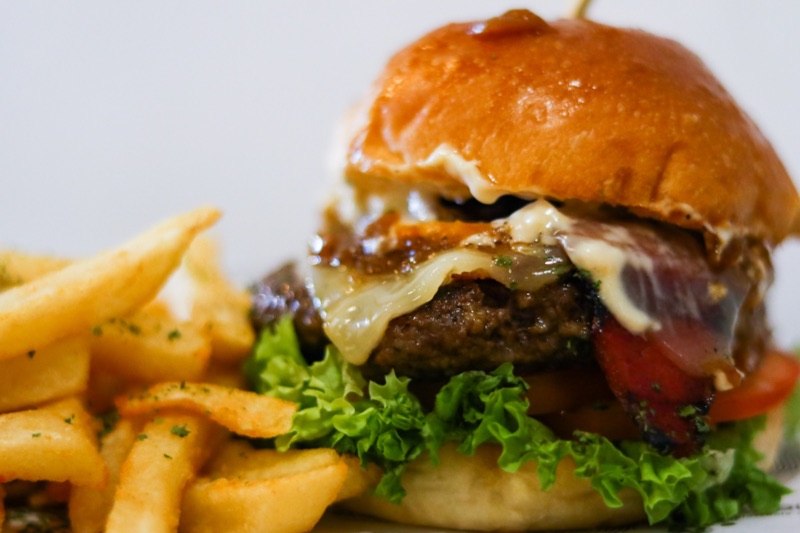 If you are one who takes your meat seriously and loves a good classic burger with little to no-frills, Beef Baconator (S$17.90) might be for you. Consisting of 130g freshly ground beef patty and beef bacon enhanced with Monterey jack cheese and caramelised onions, the Beef Baconator was itself a hearty burger waiting to be devoured. The inch-thick beef patty was only lightly seasoned, retaining the natural meaty flavour of the beef. When eaten alone, it may seem underwhelming, with its lack of taste. And that’s the reason why burgers are meant to be consumed altogether, with its juices flowing right through your fingers.

Saltier than regular pork bacon, the beef bacon was mildly smoky, intensifying the flavours of the burger. Personally, I felt that the patty was too overdone for my liking. If only the patty was grilled to a medium-rare pink, it would’ve been perfect. Of the three burgers we tried, my partner and I both agreed that Darkwing Duck (S$17.90) was our favourite. Named after Disney’s titular superhero which made its debut in 1991, (working title) Burger Bar’s Darkwing Duck was a hero on its own, made unusually attractive with the use of a dark charcoal bun instead of the regular brioche bun. Featuring a thick slice of duck sitting on a bed of crushed tater tots, topped with a perfectly shaped sunny side up, its sweet-savoury flavour from the Hoisin glaze was a good complement to the slightly smoky duck breast. Together with the piquant arugula, an additional layer of muskiness from the charcoal bun rounded out the flavours of the burger, resulting in a creation that was uniquely charming and delectable. 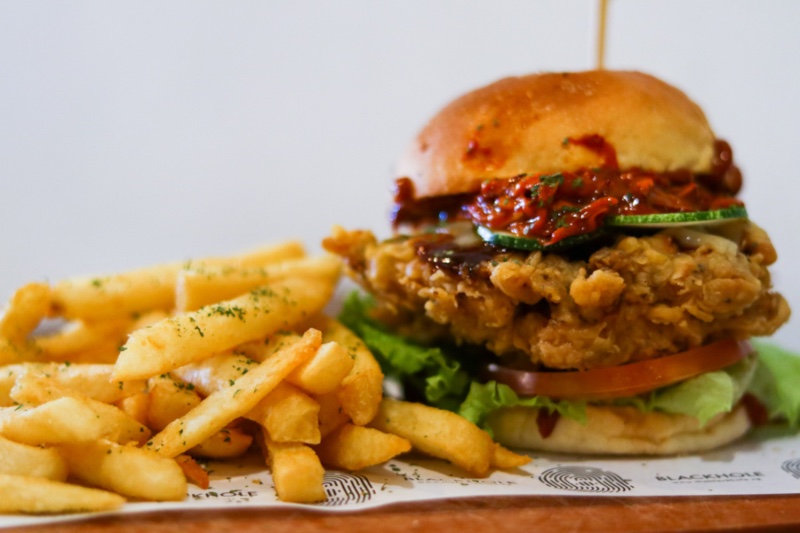 Leaving the strongest flavour for last, we ended our burger journey in Korea with the burger bar’s Seoul Sister (S$15.90). Heat and fieriness came to mind after I saw at the ingredient list. I mean, what else would you expect when you see the words ‘kimchi‘ and ‘gochujang‘, right? 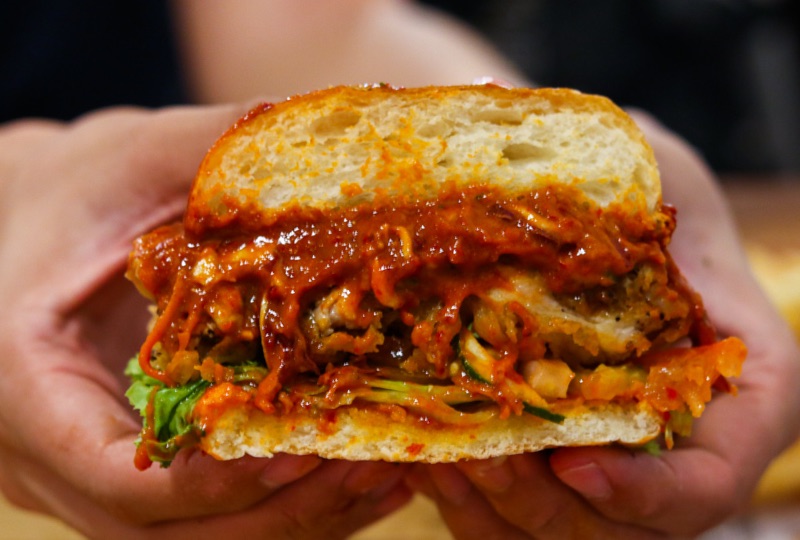 I might have set my expectations a little too high after having the Darkwing Duck, and was thus, slightly disappointed by Seoul Sister. The savouriness of the garlic soy fried chicken was subdued by the gochujang, which they were too heavy-handed with.

Not only that, I felt that the kimchi lacked its fermented sourness which was a deciding factor in korean-ising the burger itself. Though we are huge fans of Korean flavours, my partner and I barely finished half the burger as it was too salty, overall, and lacked depth in its flavours. 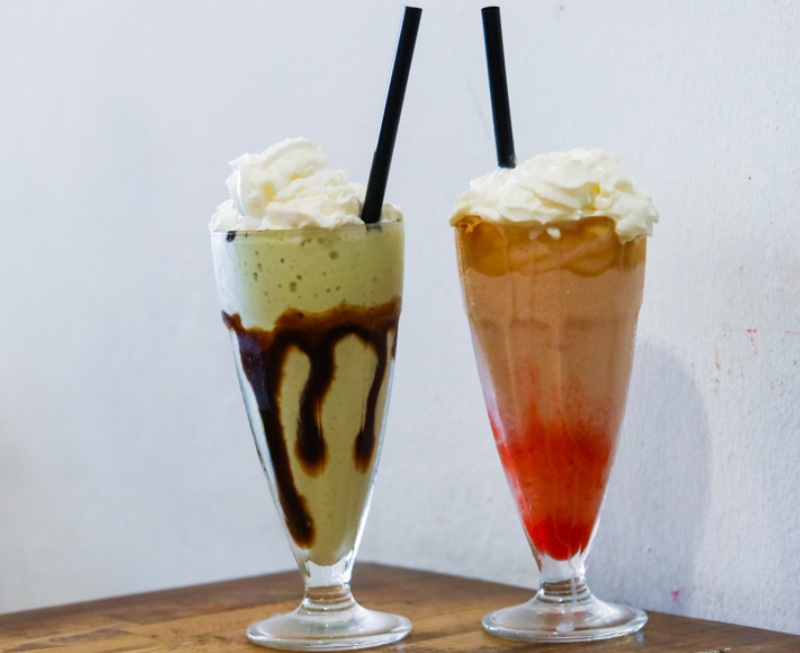 After a scrumptious meal of burger and fries, why not wash it down with some sinfully satisfying milkshakes? For just that little bit of health, try Avocado Bravado (S$10.90)—a classic avocado milkshake mixed in with chocolate drizzle. Although slightly watered down, the taste of avocado was still prominent in this milky mixture.

However, if you are going full-fledged into cheat-day mode, PBJ (S$10.90) would be your best bet. This peanut butter jelly-inspired milkshake was so rich and nutty; it was simply irresistible. With the fruity strawberry jam blended in, this cup was breakfast in disguise, in its greatest form!

With its unpretentious vibe and friendly service, (working title) Burger Bar is a great place to chill and hang out with a group of friends. All that needs to be done are little tweaks to their recipes and I think they will be ready to lead halal cafes and restaurants into the limelight!