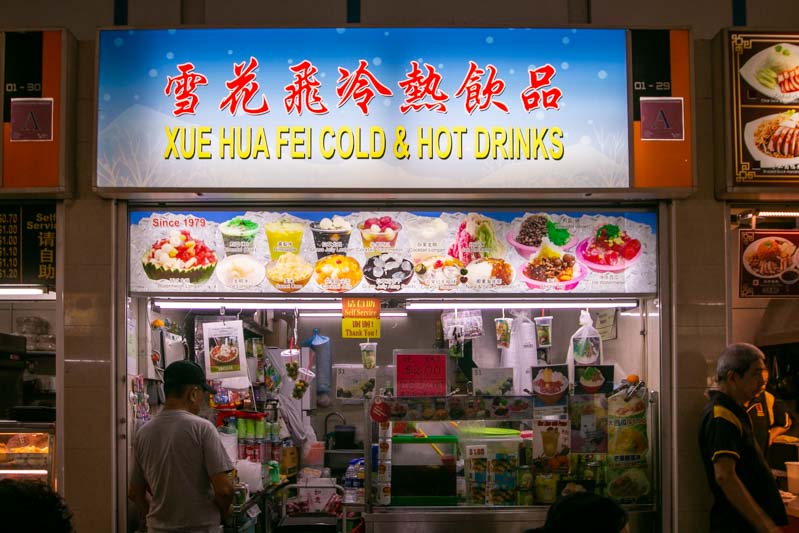 Don’t let the name deceive you, they’re not selling your standard hawker drinks like kopi or teh. Xue Hua Fei is a full-on dessert stall! The hawker centre is a mere stone’s throw away from Bedok MRT Station, so it’s the popular alternative for consumers wanting to spend less. 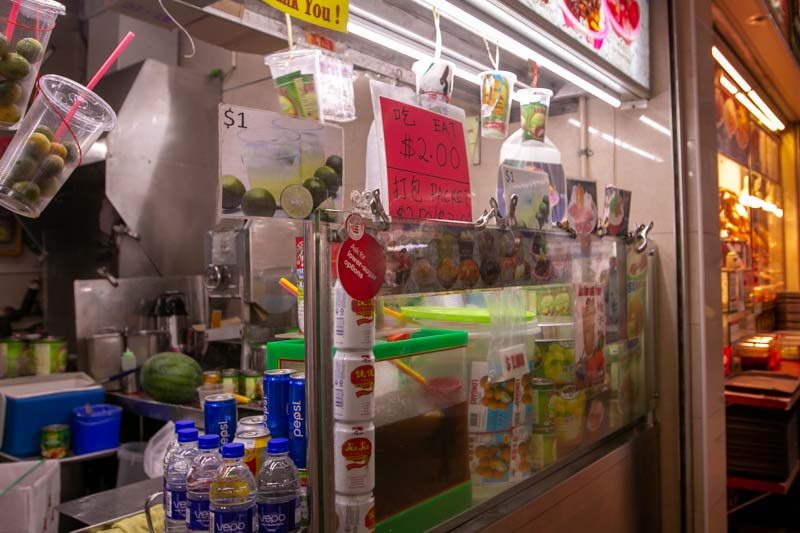 Since 1979, Uncle Teo has been selling his humble mouthwatering local desserts at cheap, ranging from ice jelly to cheng tng.

One particular item that caught our eye was the Da Xi Gua (literally meaning ‘big watermelon’). It’s not every day that I see an entire watermelon on the menu, much less devouring it on a regular basis. Da Xi Gua comes in two portion sizes at two price points, S$6 and S$8. We weren’t feeling adventurous, neither did we have enough stomachs on our end, so we settled for the standard S$6 bowl.

I had a brief chat with Uncle Teo about his watermelon creation as he prepared our dessert. “It broke my heart to just throw the rind away just like that! Plus it looks pretty to extend its usage as a bowl (after protecting the watermelon flesh),” he explained. 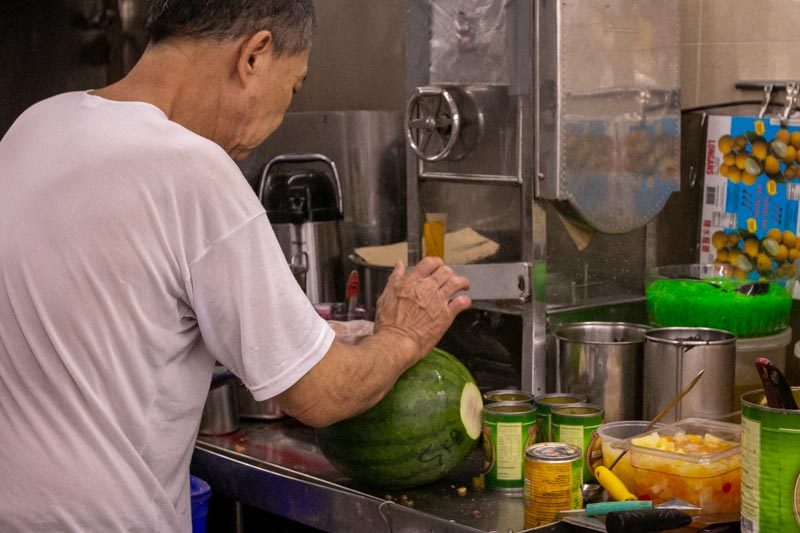 Step one for Uncle Teo is not to cut open the watermelon, but to give a few good smacks to check if it’s ripe. Not sure if that’s magic or years of experience under his belt.

It’s evident how much Uncle Teo loves his watermelons, and he takes care to ensure that each one is ripe and safe for consumption. Boom! Even jagged lines look aesthetic; maybe because the watermelon’s flesh was an enticing shade of red. 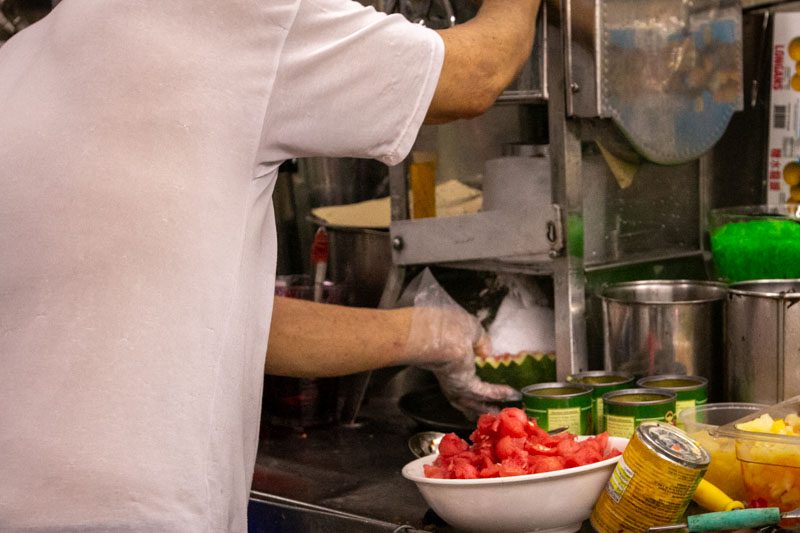 He started scooping out the flesh from the chosen half into perfect spheres and placed them in a separate bowl. Then he filled the empty watermelon rind with shaved ice.

At this point, it struck me that the watermelon wasn’t rolling around, and discovered Uncle Teo had sliced off a bit of the bottom to create a flat stand. Genius.

It’s an arduous process for one Da Xi Gua, and I reckon it took a good five minutes for him to assemble this dessert. Meanwhile, a queue started forming behind me. Sheepishly, I stood to the side and continued my conversation with Uncle Teo. 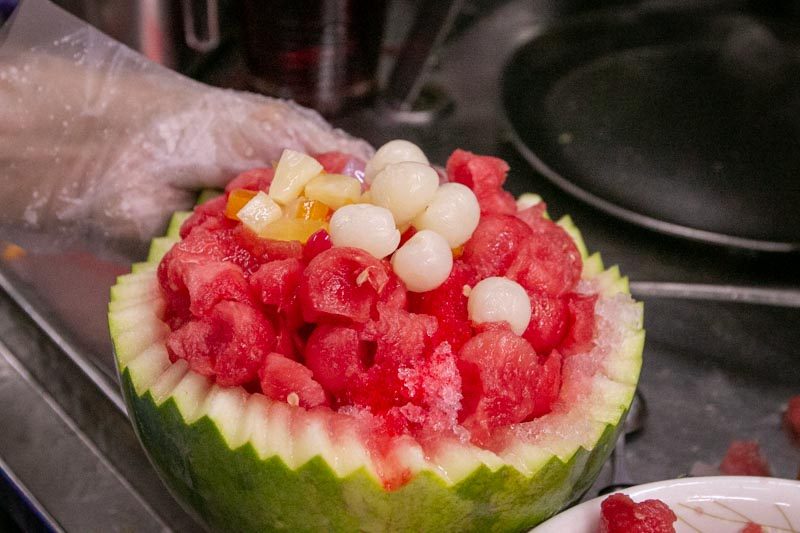 All I could do was marvel at it. Also, it was very weighty to be holding on to it for too long. Armed with a spoon and a straw each, it was time to devour the colossal watermelon bowl. Looking at it up close, Da Xi Gua is phenomenally huge. The half-emptied rind was filled to the brim. The fruit toppings not only added a touch of colour but also a tangy-sour edge that opposed the rich sweetness of the watermelon. We took a sip of the watermelon juice-cum-melted shaved ice. Ah, just what we needed to escape the heat! Digging around the bowl, we also found attap chee! It’s one of my favourite ingredients in a dessert, although I do recognise that it’s one that requires an acquired taste. 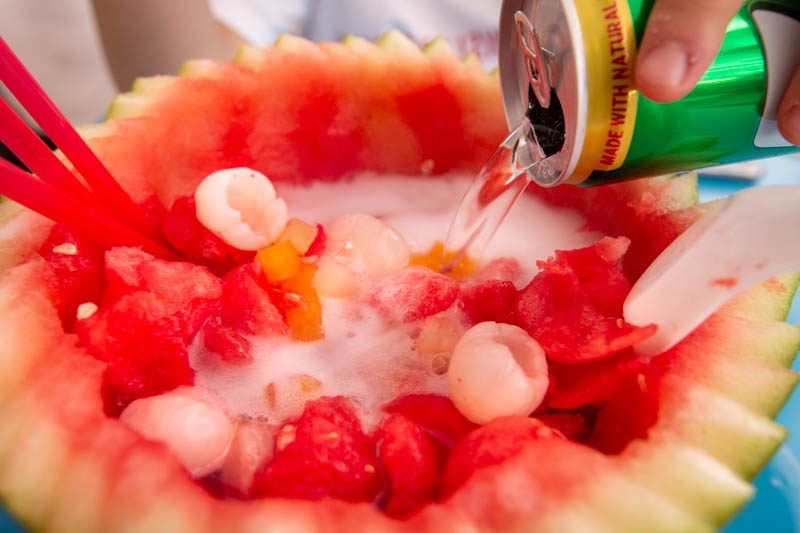 Uncle Teo recommended that we jazz up the fruitiness by pouring out a can 7-UP into our watermelon bowl. Taking a sip of this now-new concoction reminded me of a fruit syrup fizzy drink from a void deck snack shop.

It’s no wonder that Da Xi Gua finds fans in the old and the young.

After conquering Da Xi Gua, we suggest that the standard size was made for a group of three or four, whilst the upgrade might require a squad of six.

But as most of us here from SL are big eaters, you know it took only two of us to completely smash it.