Ever wondered how a marriage of durian and chicken would work out? I for one have never actively pondered that particular question, but ever since I’d heard about its existence, I have been very intrigued. 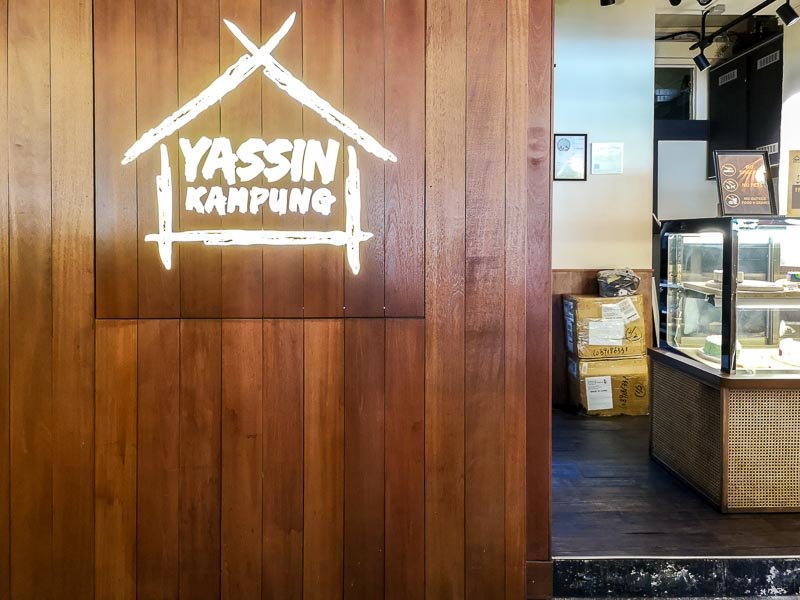 Yassin Kampung has been around since 2002, but they have successfully managed to continuously garner the support and return of diners with their innovative menu and mouth-watering recipes.

Today, they are located in Admiralty, Marsiling, Clementi, and soon, Bedok. I headed down to the Clementi outlet on a sweltering weekday to find out for myself if durian chicken is a hit or miss. 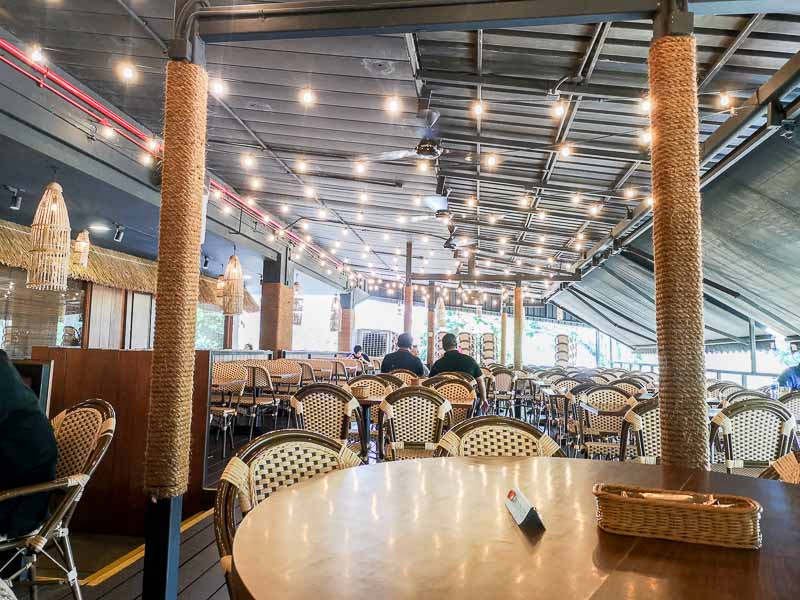 The Clementi branch is a little more special with its sheltered alfresco dining space, strewn with fairy lights and decked in rattan, wood and thick manila rope. It was pretty stuffy given the midday weather, so perhaps an evening visit would be better. 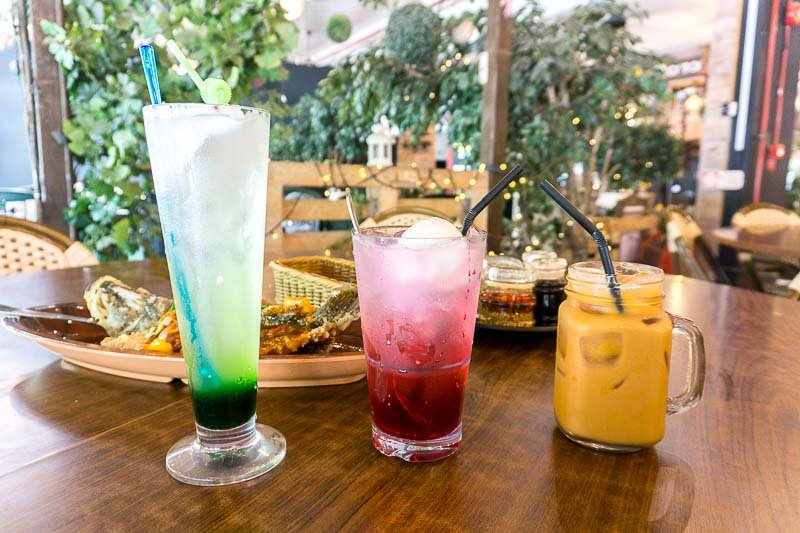 With three drinks to choose from, I was surprised to find myself really a fan of the Super Cooler (S$6). It had large shavings of coconut flesh that were a God-send for the intense humidity that day. The best part was that it wasn’t as sweet as I’d initially thought it’d be. Who doesn’t love a handful of satay? The Kampung Satay Platter (S$9/S$16) had a mix of chicken and beef, served with a handful of cucumber and onion chunks as well as nasi empit (rice squares). The chicken was the juicier of the two, as the beef was rather tough and very hard to chew. As we all know, the peanut sauce can make or break a satay dish, and the one here was disappointingly mild. It had a nice crunchy texture, but the flavour was lacking in richness. It was also a tad too sweet for my liking. 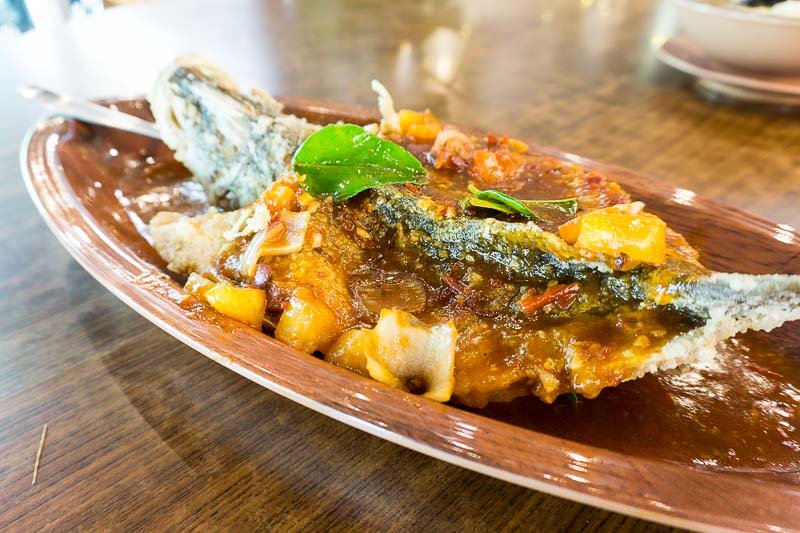 A large whole fried fish is one of my favourite dishes, especially when it is paired with a sauce that has a sweet-sour profile. Their 3-Flavoured Fish (S$35/S$45) is supposed to be a combination of three flavour profiles, namely sweet, sour and salty. 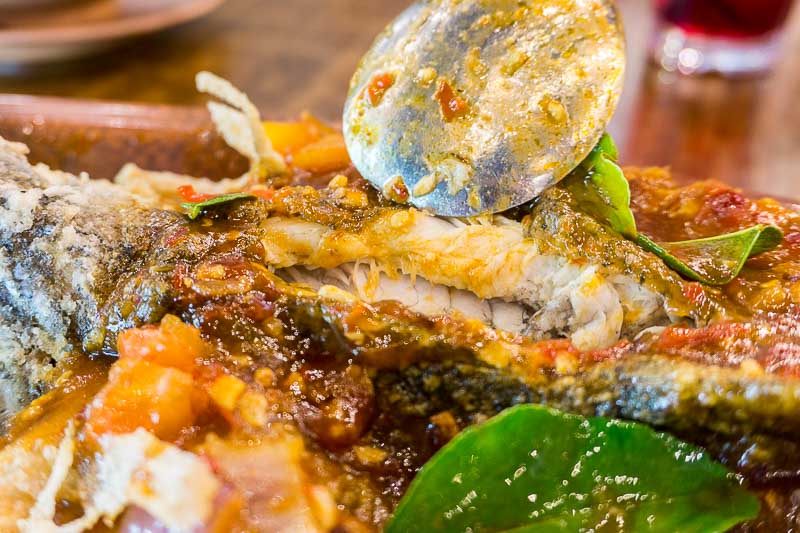 I didn’t particularly love this dish. But I was more impressed with the quality of the fish, which I still managed to enjoy despite its deep-fried state. The flesh was incredibly soft and flaky, while the skin was fried till amazingly crisp. I could’ve enjoyed this even without the sauce. 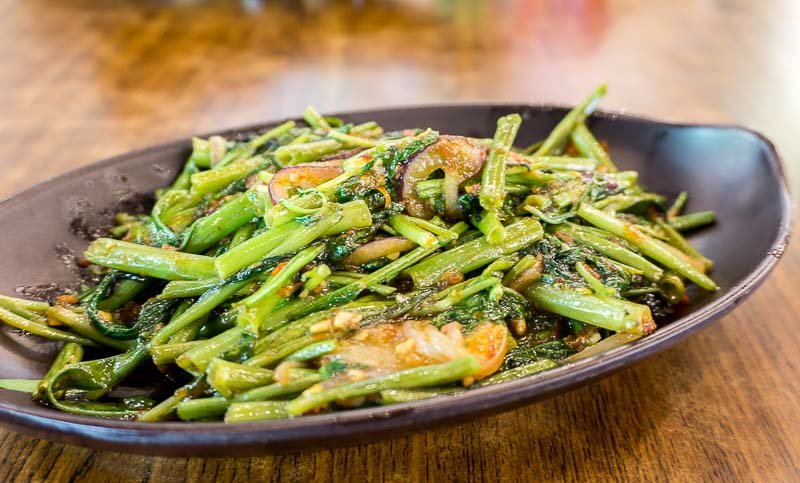 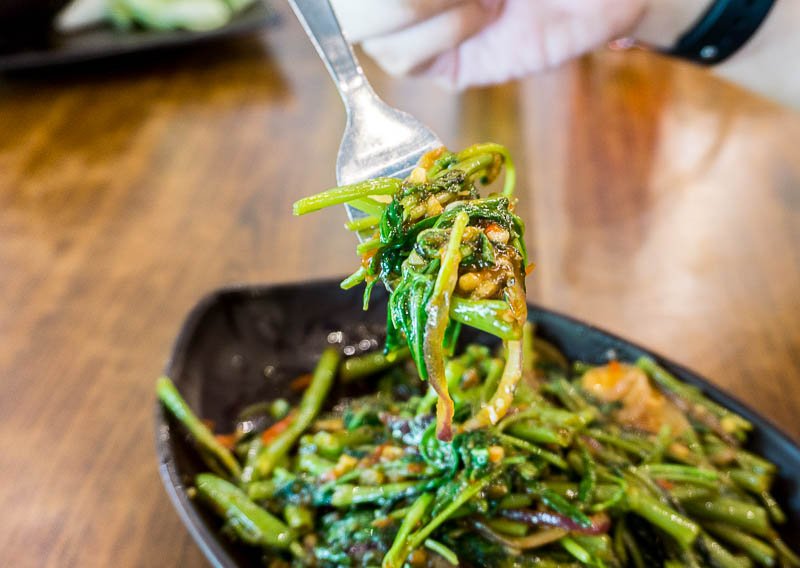 The one here at Yassin Kampung was slick and delicious, and it was one of the top favourite dishes by those around the table.

I could also detect a hint of smokiness as I took a forkful, and before I knew it, the entire serving plate was polished clean. 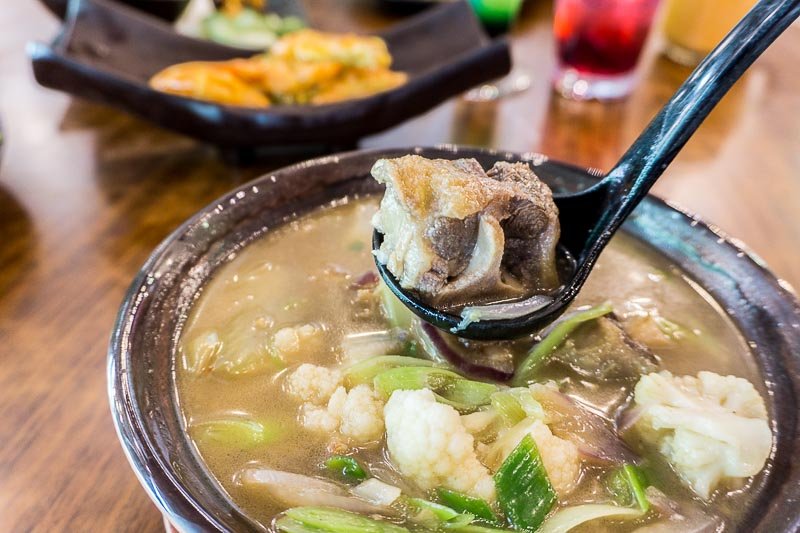 I recall a few months ago, I was in JB and I was very fortunate to dig into the best oxtail stew I’d ever had. Instantly, I wondered how their Soup Ekor (S$8/S$15) would compare. The broth itself was very flavourful, and the bowl was loaded with ingredients like celery and cauliflower.

Unfortunately, the meat was lacking and I could barely pry off any flesh or fat from the several pieces of tail parts. It’s a shame because I loved the comfort of the soup, but not having anything to really chew on gave me little reason to finish my portion. 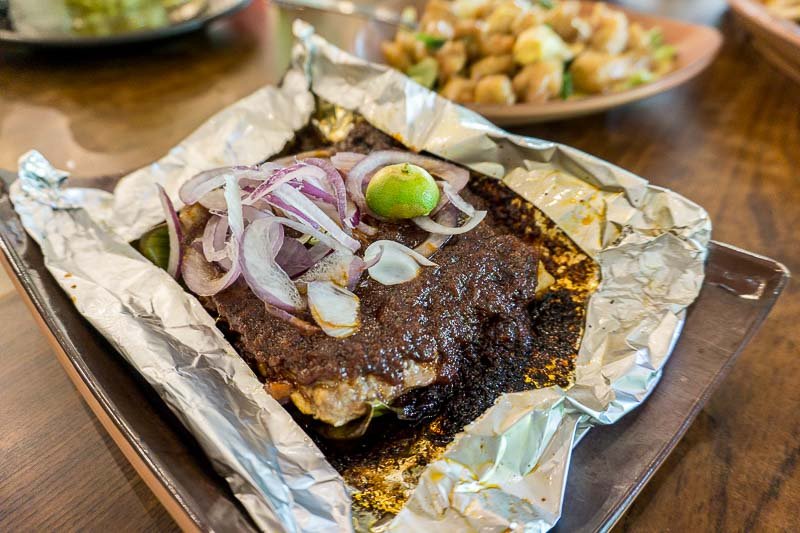 BBQ Sambal Stingray (S$15/S$22) is typically a must-order when you’re out in a hawker centre. I was excited to take my first bite of this, but sadly, it wasn’t spicy enough. The sambal also didn’t have that tang that I’m so used to tasting. 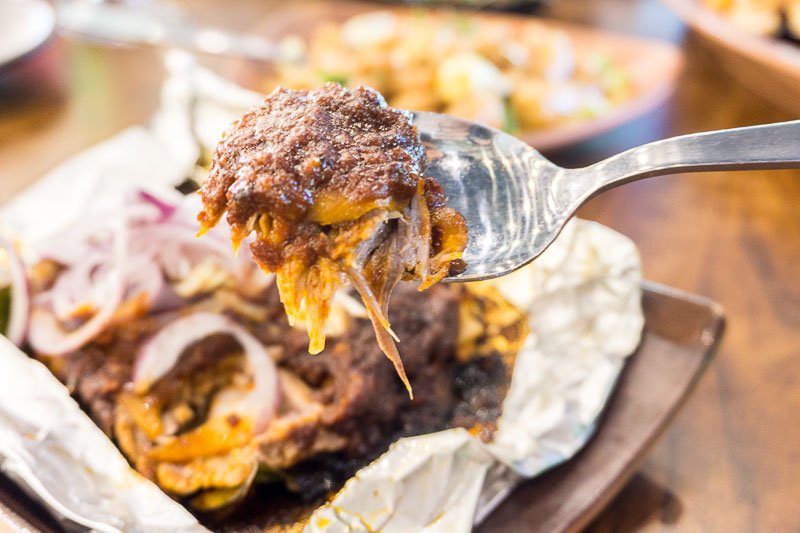 Also, the stingray meat was rather tough and stringy, unlike the melt-in-your-mouth sensation that I usually expect when enjoying grilled stingray. I wonder if it’s due to the quality of the stingray, but it wasn’t my favourite, and neither did anyone around the table fancy it. 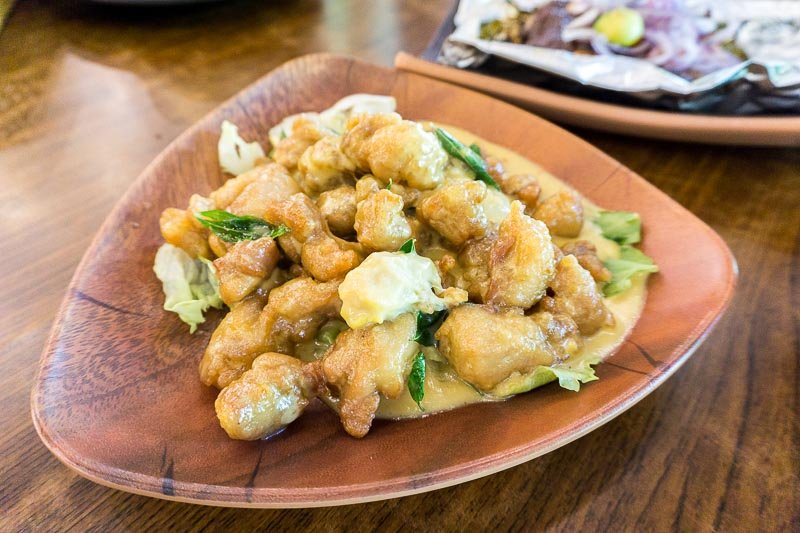 The moment we’d had all been waiting for finally arrived, and we caught the first whiff of the Kampung Durian Chicken (S$20/S$30) as it was set on the table. Not only was the aroma unmistakeable, but the sight of thick durian flesh also made me extremely excited to take a bite. 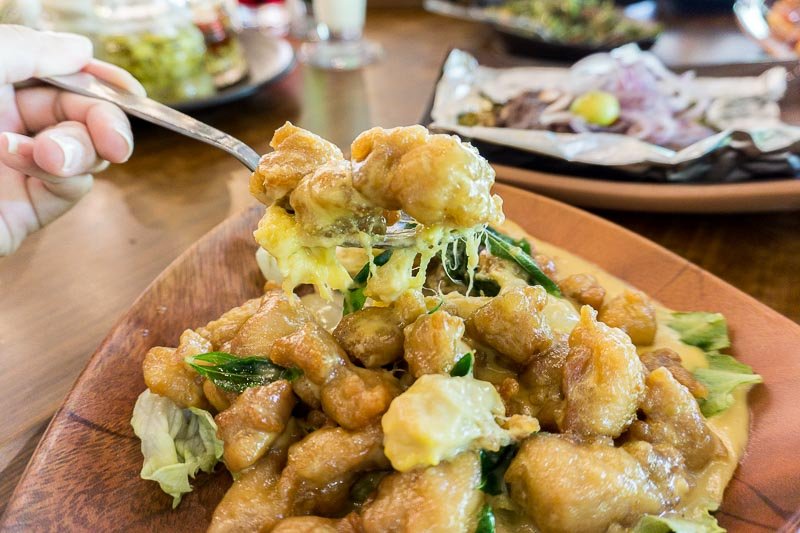 My verdict? I was on the fence about how it tasted. There was a beautiful sticky sweet-sour taste that is exactly how I love my durians, but the presence of the chicken really threw me off.

My brain was struggling to process this confusion as I shifted back and forth constantly between loving the dish and disliking it.

After having time to really reflect on it, I feel like I still prefer enjoying durian as a fruit, and not as an ingredient that’s cooked with fried chicken. I applaud their effort, but the flavours and texture profile of this dish didn’t sit well with me. 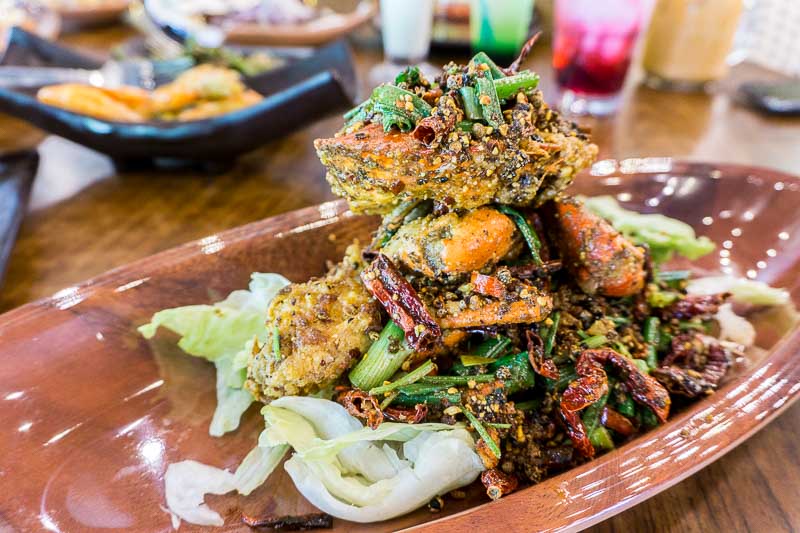 Another dish I was really looking forward to trying was their Sichuan Mala Fried Crab (S$45/S$65). Here in the office, we commonly have #MalaMondays, so my take on mala is that it has to be numbing on the tongue and satisfyingly spicy (ideally zhong la). I truly enjoyed how juicy the crab meat was, and the mala zing was honestly addictive. The spiciness danced on my tongue as my lips gradually became numb. It was no surprise that I was the one who asked if I could steal the last crab piece.

It was a solid effort from Yassin Kampung, and there were more hits than misses in my book. I would highly suggest the Sichuan Mala Fried Crab and Kang Kong Belacan if you decide to pay a visit to any of the Yassin Kampung outlets.

The more people you rally to share a meal at Yassin Kampung, the better. The menu is pretty extensive and it’s the best way to give everything a try!

Previous articleUltimate Beginner’s Guide To London: A 5D4N Itinerary Of What To See & Eat In This Capital City
Next articleJAM At SIRI House: Chicken In A Biscuit, S’mores & Other Elevated Comfort Dishes In Dempsey Hill