As someone who has attempted multiple times to go on a vegetarian diet for a day or two, I was always stumped by the lack of interesting options near me, apart from the usual hawker stalls or salad places.

Well, I was browsing through my Instagram stories, and saw a colleague eating vegetarian bak kut teh. I was intrigued. It turns out that he was at Zhenyi Veggie Place 真一素食坊, which serves up dishes like curry fish, mala and even my favourite—cereal prawns. 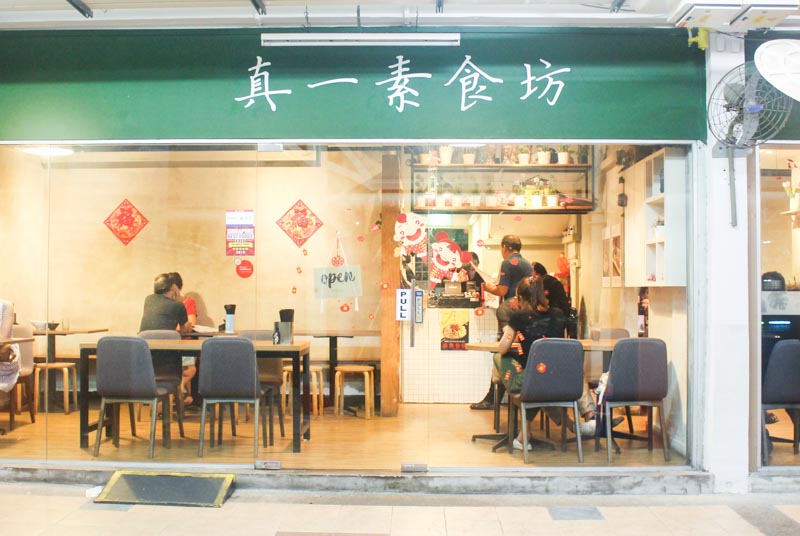 With said colleague and some other dining companions, we headed down to the vegetarian eatery which is situated in Ang Mo Kio. 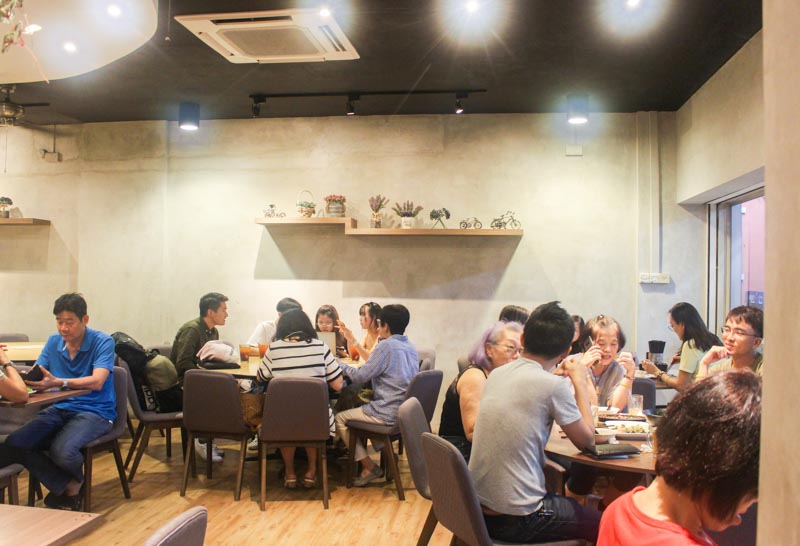 Since the place was at least a good 10 minutes walk away from the nearest bus stop, I was elated to find out that it was air-conditioned.

It was fairly crowded on a Tuesday night, with a serene and comfortable atmosphere. We promptly made our orders at the counter, and the food came to us relatively quickly. First up, their Bak-Kut-Teh (S$16 medium), which was what led me here in the first place. It also comes in a smaller bowl for S$8, which is more suitable for one or two people. Taking a sip of the deep, earthy-coloured broth, I was greeted with a distinct and fragrant medicinal flavour. While I enjoyed the slight bitterness that came with it, I noticed a sour aftertaste which I was not particularly fond of.

And understandably, it was lacking that rich gaminess that comes from pork, so if you prefer more of that in your bak kut teh, I think this version could be too medicinal for your liking. 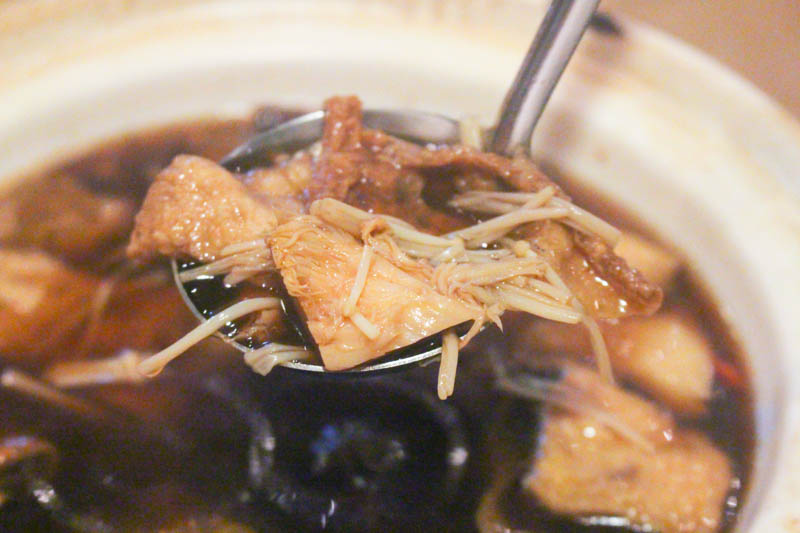 Each spoonful dug up a bunch of enoki mushrooms and thick bean curd skins.

I liked that both ingredients were cooked to a nice chewy, tenderness. My only gripe was that I wished there was more variety of mushrooms and vegetables to make up for the S$16 price point, considering it already does not come with meat. Moving on to the mock meat, I felt that it had a texture resembling a tough and firmer bean curd skin, and for a split second reminded me of actual meat. I have to say though, don’t have too high expectations for it to taste similar to pork.

And while I wished there was a peppery kick to the soup, I didn’t mind the strong herbal flavour, and found it to be a hearty dish to start our meal with. For a soup option that’s easier on the palate, you can consider going for their Fish Soup Claypot (S$18/large, S$10/regular). We got the large portion, which was good for sharing between four people.

It was an earthy and warm bowl of seaweed soup. And because seaweed is commonly used in fish soup, I could almost pass it off as the real thing. 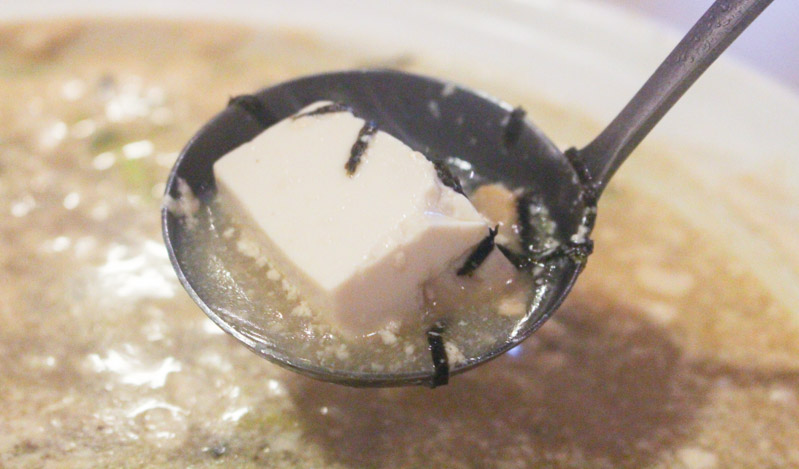 For me, tofu is an essential part of my fish soup experience. I liked that this dish offered large, thick chunks of that delicate bean curd.

While nothing special, the tomatoes, mushrooms and cabbage made the simple bowl of soup much more wholesome. 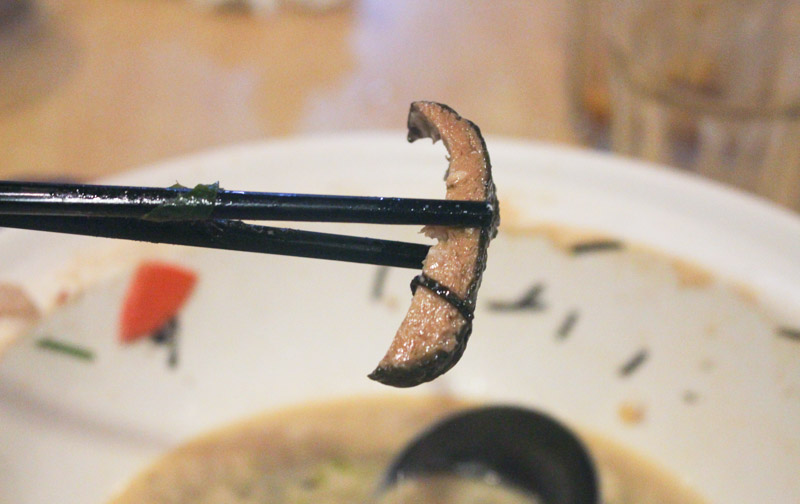 The problem with vegetarian food is that sometimes you can’t seem to identify the “meat”. I assumed that this was the mock fish, because of its “skin”. It had a typical bean curd skin-like texture, and did not have much taste to it.

I’m not going to lie, this wasn’t the most appetising-looking dish. But if you are able to look past that, then I think that it is a comforting bowl of soup you can enjoy. But I don’t think I would pay S$10 for a bowl of soup with vegetables, since I can get it for cheaper at any other hawker stall. Next on our list was the regular-sized Mixed Vege Curry Fish in Claypot (S$12 regular, S$20 large). Fish curry is one of my favourite go-to zi char dishes, so I was eager to dig in to their vegetarian rendition. 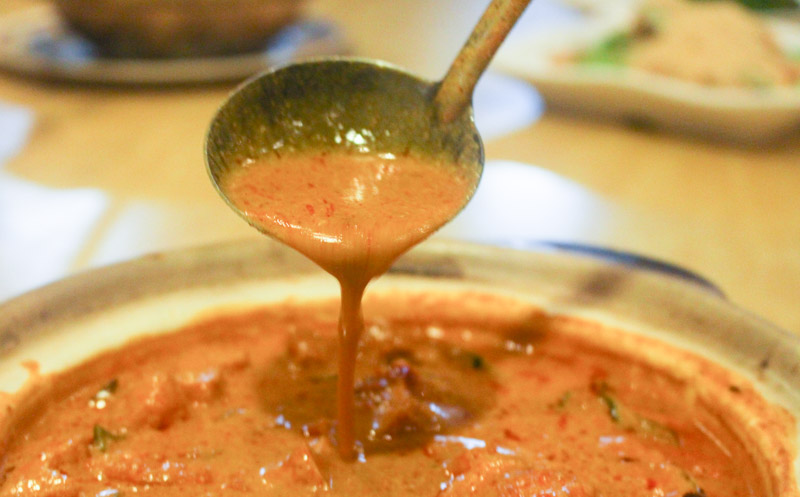 A taste of the curry strongly reminded me of the ones that you pair with prata. I thought that it had a fairly one-dimensional taste, with it being mostly spicy without any salty or sweet element.

While I enjoyed the thick consistency of the curry, I would have liked it a bit more savoury or creamy, perhaps with more coconut milk. I thought there was a good variety of vegetables, including lady’s finger, eggplant and bean curd skin, which provided some texture to the smooth curry. The tomatoes, on the other hand, added a much-needed tangy sweetness to the dish.

After rounds of scavenging for some mock fish, there was no catch of the day. I did taste a glimpse of something silky, which could’ve been the “fish” skin. My colleague who frequents the eatery mentioned that he usually finds quite a bit of “meat”, so perhaps it was just not our day. Following the theme of classic zi char dishes, we ordered a small plate of their regular-sized Cereal Veggie Prawn (S$10/regular, S$18/large) to try. 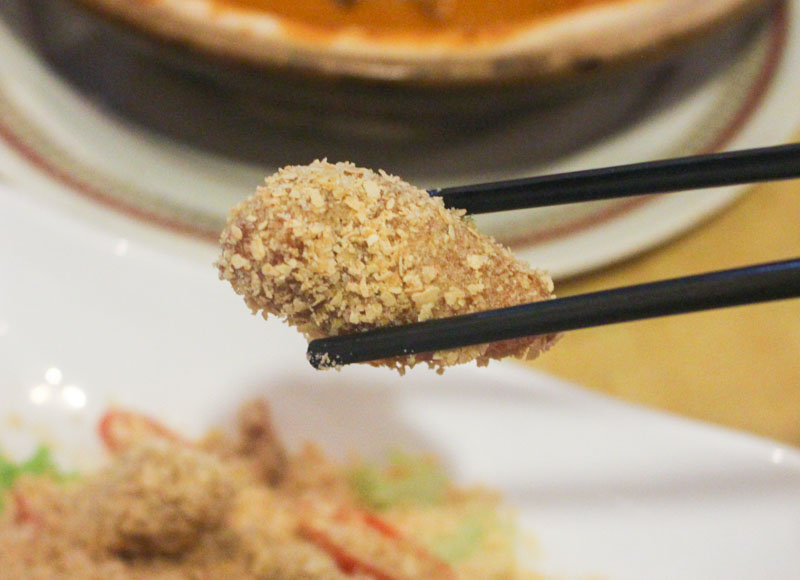 Since the “prawns” were completely coated by the cereal, I was pleasantly surprised when I chomped down on a thick layer of crispy batter.
The mock meat was firm, with a bite to it, and kind of reminded me of a much tougher fishcake. 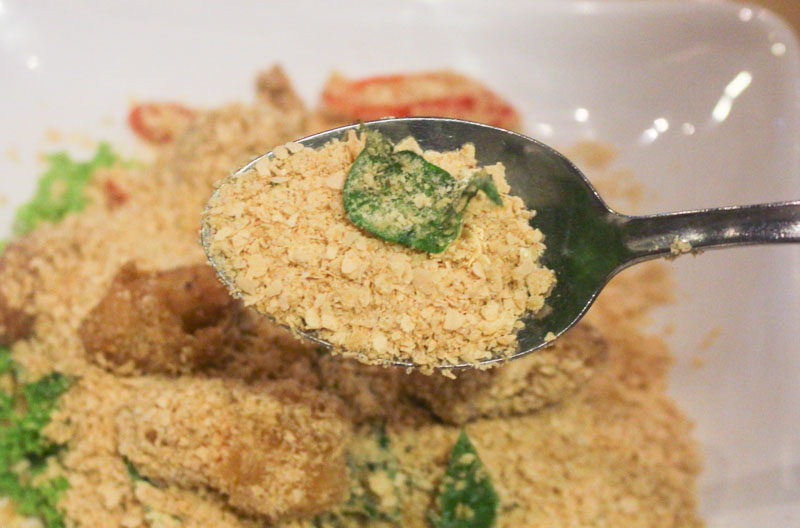 But vegetarian option or not, the cereal is where it’s at for me.
Shoving a spoonful of it into my mouth proved to be delightful. It was crispy, and delivered a combination of sweet and salty flavours.
The only thing stopping me from ordering this again is probably deciding whether paying S$10 just for the cereal is worth it.

Overall, I enjoyed the escape from the usual vegetarian stall options, especially with dishes like the bak kut teh and curry “fish”. I do think the prices for the fish soup and cereal are a bit on the steeper side for essentially what are vegetable dishes, so I probably won’t re-order them again.

If I’m bored of the the usual vegetarian stalls, I would still head over to Zhenyi Veggie Place for some comforting vegetarian food though!

If you’re looking to switch up your vegetarian options, swing by Zhenyi Veggie Place for some “bak kut teh” or cereal “prawns” with your family and friends!