Being of Hakka descent, I never had the honour of knowing what an authentic Hakka dish was as I was not brought up in a traditional Chinese home. My paternal grandmother would prepare Hakka yong tau foo once in a blue moon—it was a long and tiring process, as it took almost half a day just to prepare the ingredients. 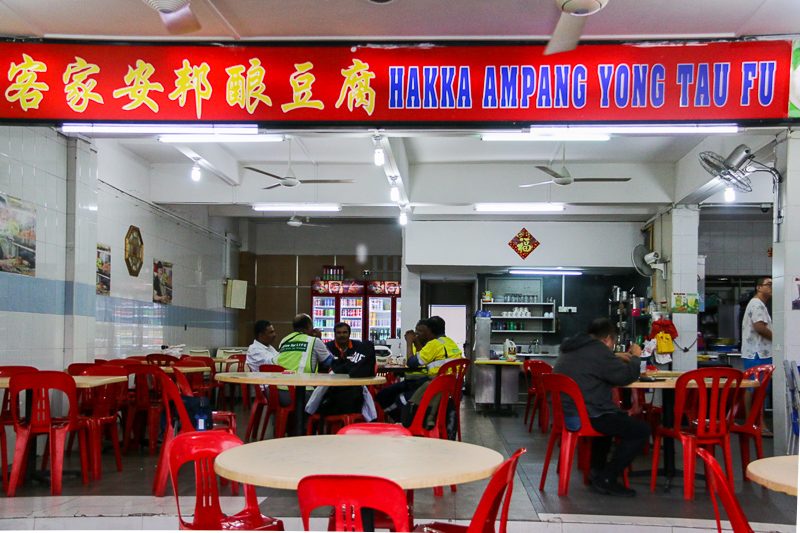 I wanted to explore my options as I knew the painstaking process of my grandmother making it and found 928 Ampang Yong Tau Foo, a stall that sells traditional Hakka-style yong tau foo.

Having been around for over 10 years, this stall is renowned to most Hakka people in Singapore. In fact, my grandfather would agree that this stall sold one of the most original Hakka dishes one can find in Singapore. 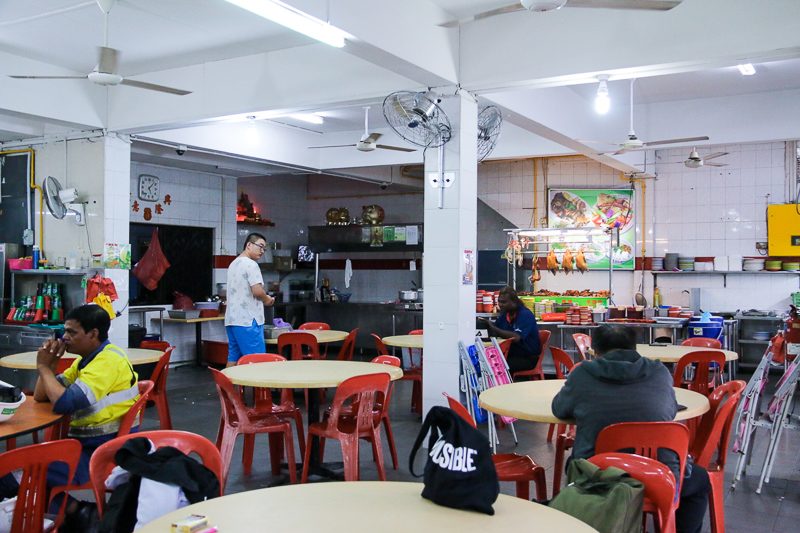 I decided to head down to 928 Ampang Yong Tau Foo located along Upper Thomson to try out. I already knew the difference between Hakka-style yong tau foo and normal yong tau foo, but I wanted to see for myself—did this stall match up to my grandmother’s cooking? 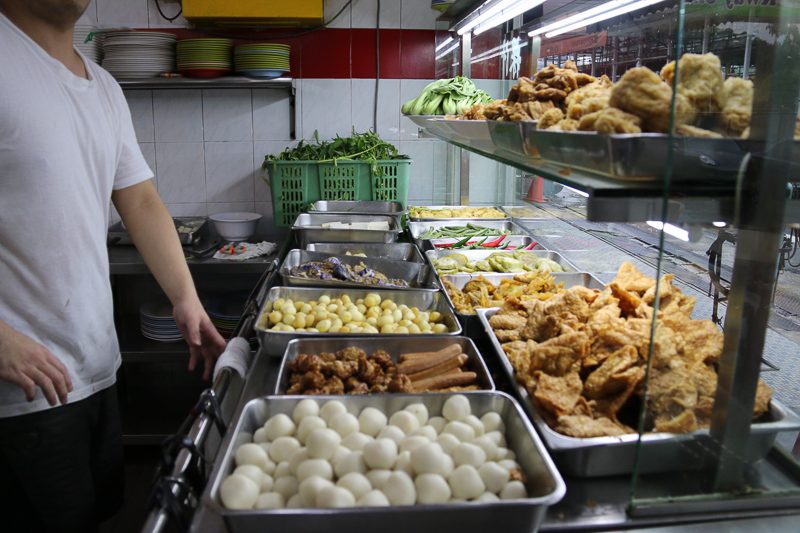 Despite going in a group of three, I made the decision to order a portion for two—I was advised by my parents that the Hakka’s were generous with their servings. 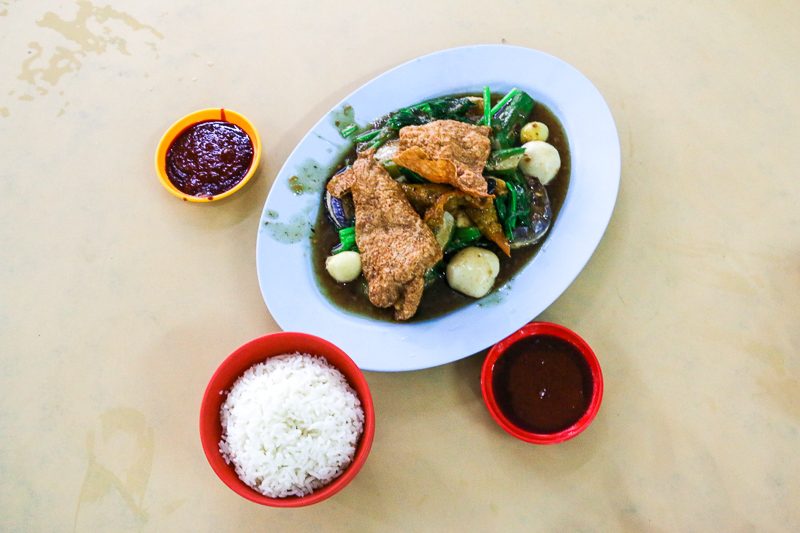 They were not wrong. For a portion for two, alongside a bowl of rice, we ate to our hearts’ content and had a satisfactory meal. On a rainy day, the dish left a heartwarming and comforting feeling that was close to my heart. 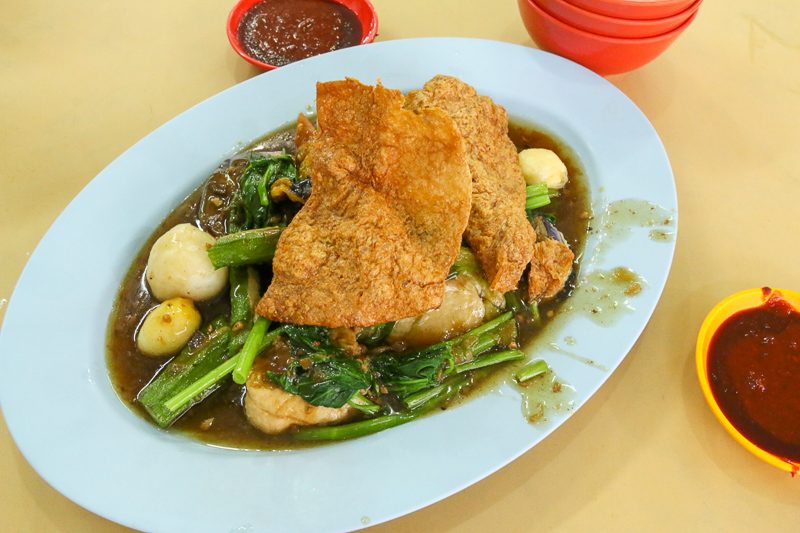 A typical portion for two comes at a humble price of S$8. At first glance, you may belittle the presentation of the dish. But never judge a book by its cover. I made sure to order one of my favourite ingredients, Tau Kee (S$0.60). Unlike the usual tau kee that has fish meat sandwiched in between, this was just fried beancurd skin. Even after sitting out for a while, the tau kee still had a crunch to it.

Every bite had the crisp sound of the crackling skin. Fried to golden perfection, this ingredient was most definitely not on the healthy list. But do not skimp on this, indulge in it and you will not regret it! 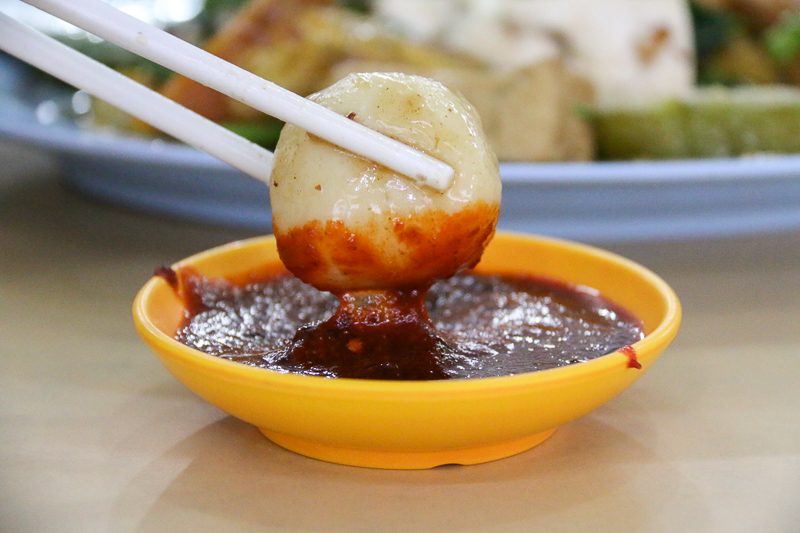 Next up, another mandatory ingredient was Fish Ball (S$0.50). It had a soft and silky texture that was smooth to the bite. For someone who was not a fan of fish ball, I enjoyed this. It did not have the fishy aftertaste that many store-bought fish balls had.

To enhance the taste, I highly recommend dunking the Fish Ball in the house-made chilli sauce. Despite it being spicy, a hint of sweetness pulled through at the end. 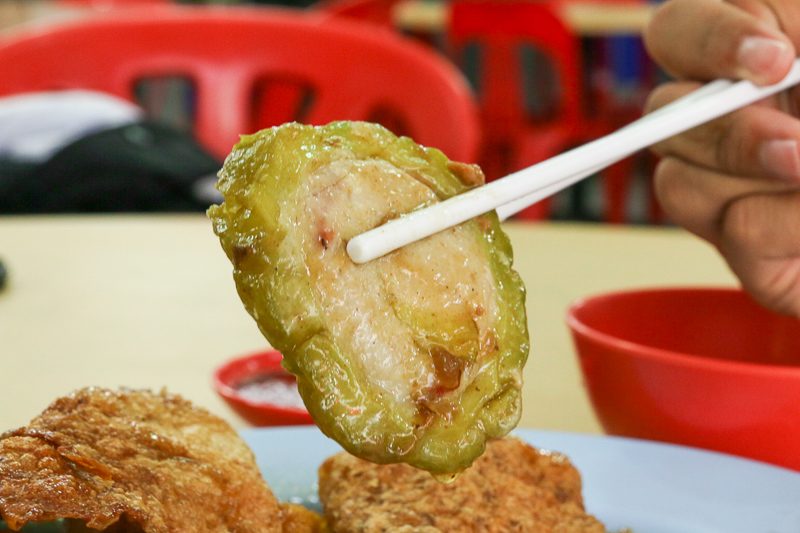 Now, Bitter Gourd (S$0.50) as the name suggests, are renowned for its harsh flavour. However, the chefs were able to incorporate the perfect sweetness in the fish meat to balance out the bitterness of the ingredient. If you love bitter gourds, you gourd to try this one out. 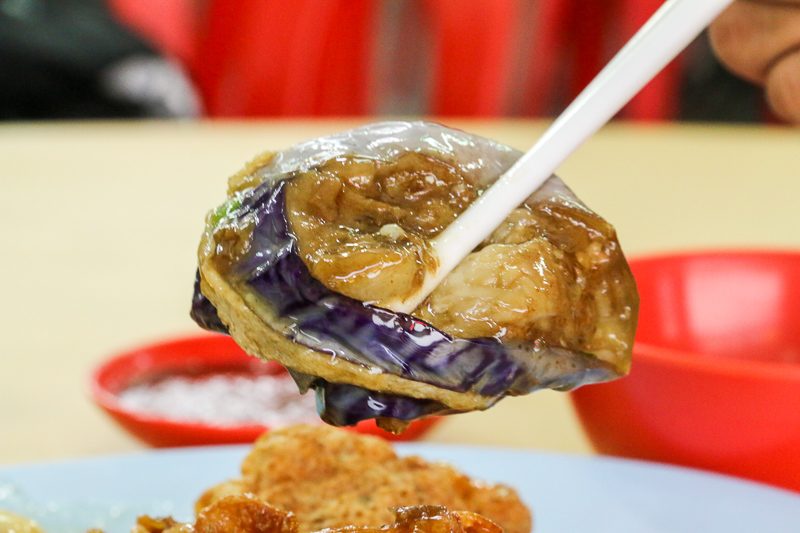 My personal favourite was definitely Eggplant (S$0.50). I loved the mushy texture of an eggplant, and combined with fish meat, it gave the entire ingredient a variety of texture and consistency. I know many people dislike the texture of eggplants, but do try this one out with the fish meat.

It may change your mind about this ingredient! A common ingredient found in yong tau foo was also Beancurd (S$0.50). The stall served the beancurd either fried or steamed, and my suggestion would be to have both versions. Soft and decadent, the beancurd melted in my mouth like butter. Dip it in the chilli sauce and it’ll go perfectly with rice. The serving came along with Green Chilli (S$0.50 – S$0.70), which was charged according to size. Even though it’s chilli, it did not have the spicy kick that I expected as the seeds were removed. 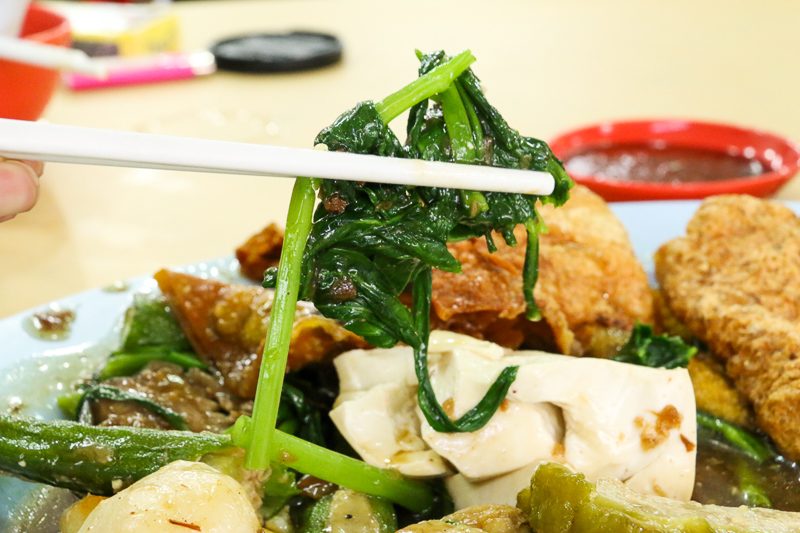 Kang Kong (S$3 for portion of two), also known as morning glory, is also a popular ingredient unique to Hakka yong tau foo. Cooked slightly in boiling water, the vegetable still had a crisp bite to it which was definitely refreshing as many places that sells yong tau foo often overcooked their kang kong. The crown jewel of the entire dish was definitely this unique bean sauce. Thick and gelatinous, this sauce went perfectly with the bowl of Rice (S$0.50).

It was an enjoyable meal, and I felt reconnected to my Hakka roots once more. I might not speak the dialect, but I undoubtedly love the cuisine.

What about you? Which dialect group do you belong to? Do you know any other Hakka recommendations? Let me know in the comments below!

Previous articleHave A Slurpin’ Good Time With 1-For-1 Ramen At Ippudo Singapore From 16 – 18 Oct
Next articleGorilla Curry: Curry Rice With Salted Egg & Taiwanese Braised Pork for S$5.50 in Bukit Batok 6 Restaurants With The Best Fresh Oysters In Singapore