When I heard that a stall in Maxwell Food Centre sold soupy bak chor mee for just S$2.50— not to mention in a claypot— I thought it was too good to be true, and decided to check out Ah Gong Minced Pork Noodle for myself. 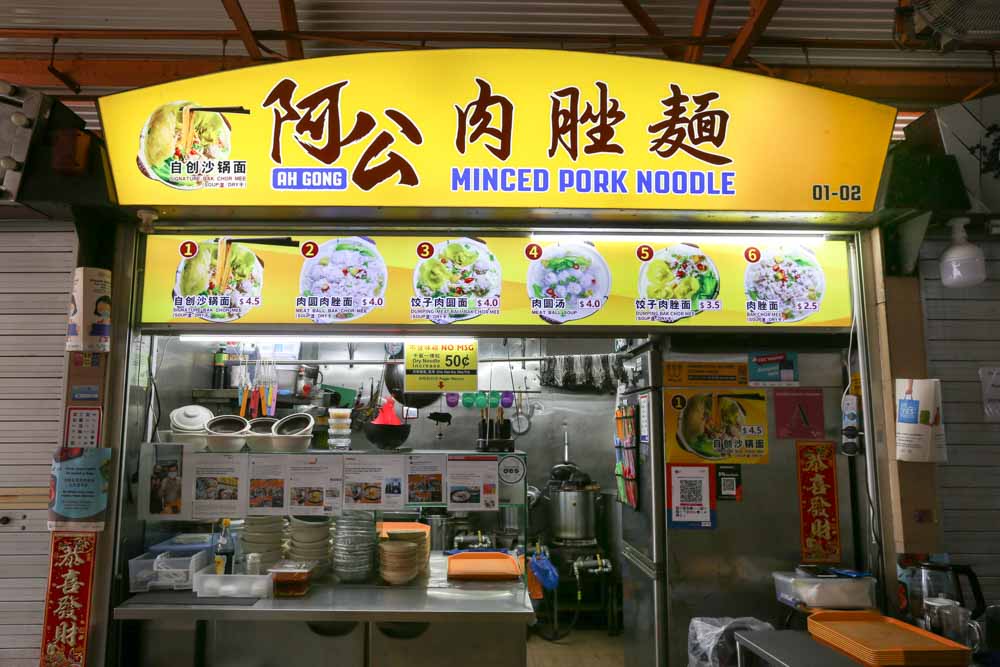 Given Singapore’s rising inflation rate and the hoo-ha with Malaysia’s chicken exports, I arrived at Ah Gong Minced Pork Noodle fully expecting to find that they had revised their prices.

After all, nobody would blame them for raising their prices. Rising food costs and an increasingly competitive market has resulted in plenty of hawker stalls closing down, including the viral 543 Laksa and more recently, San Hu Bak Chor Mee, which was opened by Ah Girls Go Army rookie actor Jasper Choong.

Yet, there it was— S$2.50 soupy bak chor mee that was cooked and served in a piping claypot!

What I tried at Ah Gong Minced Pork Noodle I started out with the dish I came here for: Bak Chor Mee (Soup) (S$2.50). Each order is made fresh upon order, so you can watch as the uncle and auntie in charge of the stall whip up your orders on the spot by cooking it in individual claypots, similar to claypot rice.

Do note that while this dish is available in both soup and dry versions, you’ll have to top-up an additional S$0.50 for the dry version. To keep it within S$2.50, we went ahead with the soup version and asked for mee kia noodles. While the S$2.50 Bak Chor Mee came with your usual ingredients, such as noodles, minced pork, lard, a couple of cabbage leaves and shallots, the first thing that I noticed was the heaping amount of noodles that practically took up the entire bowl.

Slippery and slurp-worthy, the mee kia noodles did its job in filling me up, though I wish that they had been eggier and springier. Plus, the overwhelming amount of noodles soaked up the soup faster than I expected.

It’s really a double-edged sword that left me confused as to whether I should be appreciative that I had been given more noodles or not, especially given such a low price point. The auntie told us that their soup is made with zero MSG, so you won’t feel thirsty after.

Indeed, when I tasted the soup, I noticed immediately how fresh, light and sweet it was, with a nice full-bodied savouriness from the tee poh and pork bones that had gone into the stock. There was none of that artificial saltiness that typically comes with dishes laden with MSG.

It was comforting and soothing, with the lard adding a pleasant roasted smokiness to each sip. Plus, the claypot retained heat well, and my soup remained hot even after a good 15 to 20 minutes. While the minced pork and lard gave a nice texture to the dish, I was left wishing for slightly more ingredients (such as meatballs) to complement the noodles. Despite that, this was still a really satisfying dish that I still couldn’t believe only cost S$2.50. We also decided to get Ah Gong Minced Pork Noodle’s Signature Bak Chor Mee (S$4.50), and topped up S$0.50 to get the dry version with mee pok noodles. The noodles had been tossed in a tomato and chilli sauce mixture, creating a tangy yet mildly spicy mix of flavours. It was drier than expected, so we added a couple of spoonfuls of soup to loosen up the noodles, which was springy and bouncy. What I enjoyed most about the Signature Bak Chor Mee were the ingredients, which included dumplings, meatballs, crispy lard, shallots and beancurd skin. While the silky dumpling skins had fallen apart, leaving behind the fillings, the rest of the meaty and crispy elements were savoury and substantial, making it super enjoyable. For just S$2.50, the soupy Bak Chor Mee is a real steal. Not only are you getting a substantial portion, the soup was a clear winner and I could tell that a ton of effort had been put into it. Full-bodied, sweet and with none of that overly salty MSG flavours, Ah Gong Minced Pork Noodle’s soup is something that I’d come back again for.