I absolutely adore Peranakan food. They are always so hearty and homely, giving off a comforting vibe. The cuisine tends to be full of rich and complex flavours, yet they go together well for a very satisfying meal. When I heard of Baba Chews, which is located at the heart of Katong, I had to check them out. 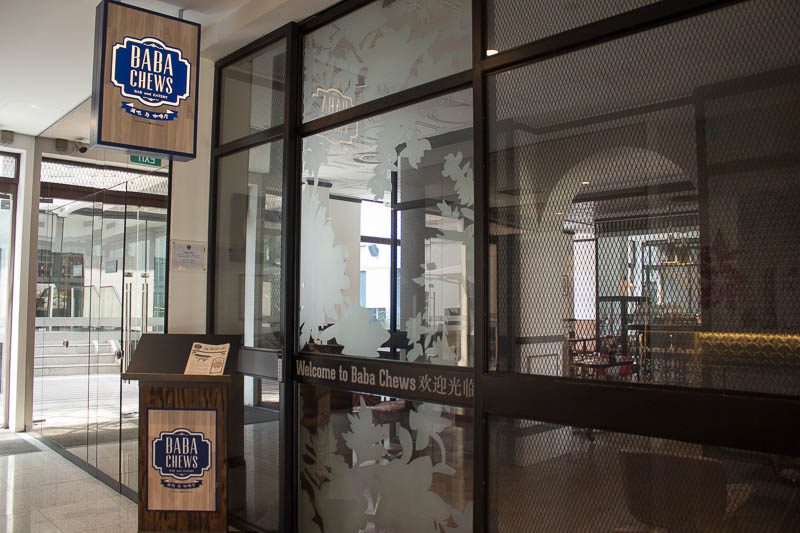 As I did my research, I realised they changed about 80% of their menu in February with several new Peranakan fusion dishes. Mod-sin foods have been all the trend recently so I decided to head down to try them for myself. 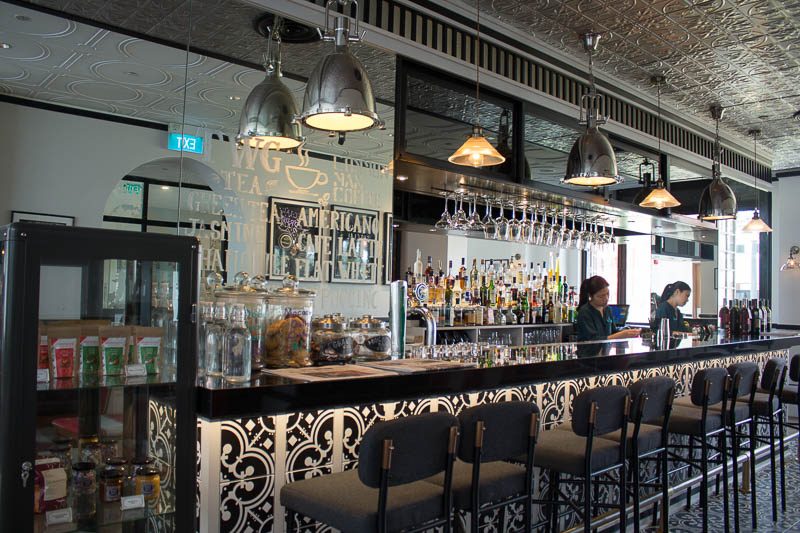 The decor of the place itself was mostly modern, with a bar counter that allows diners to overlook the restaurant floor and idly people-watch. Albeit the contemporary vibe, there were elements of traditional Peranakan style such as the geometric tiling and wooden features. To start off, we got the Otah You Tiao (S$12), which was aesthetically-pleasing with its contrasting colours. A slab of otah was sandwiched between two pieces of charcoal you tiao. I was slightly dubious of this pairing, as I have only known to have you tiao with soybean milk. 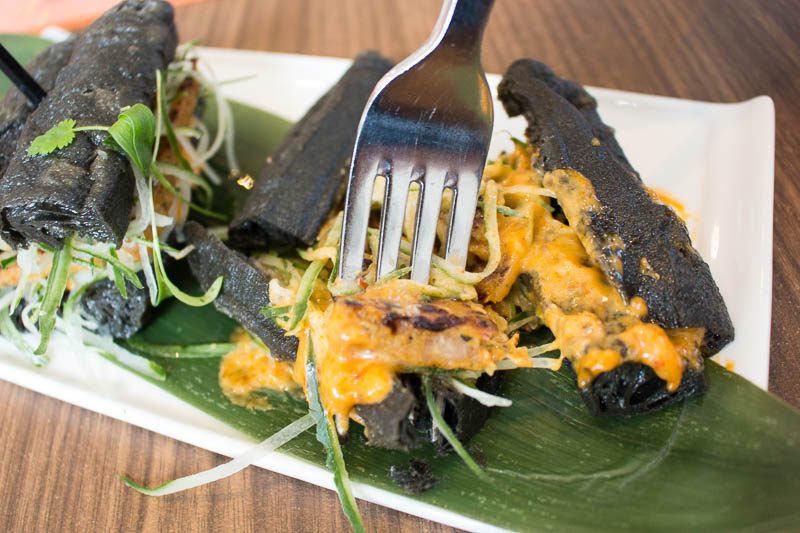 As I bit into it, I was pleased that the otah was springy and fresh. Due to the fact that it was homemade, there were chunks of fish within instead of a paste-y texture which I liked. The pairing of cucumbers gave it a touch of freshness which complemented the sambal sabayon.

It was light, yet slightly creamy and spicy. While the fillings went well with each other, I felt the you tiao was out of place. Perhaps it was to provide a crunch factor but it was way too tough that I had problems biting into it. 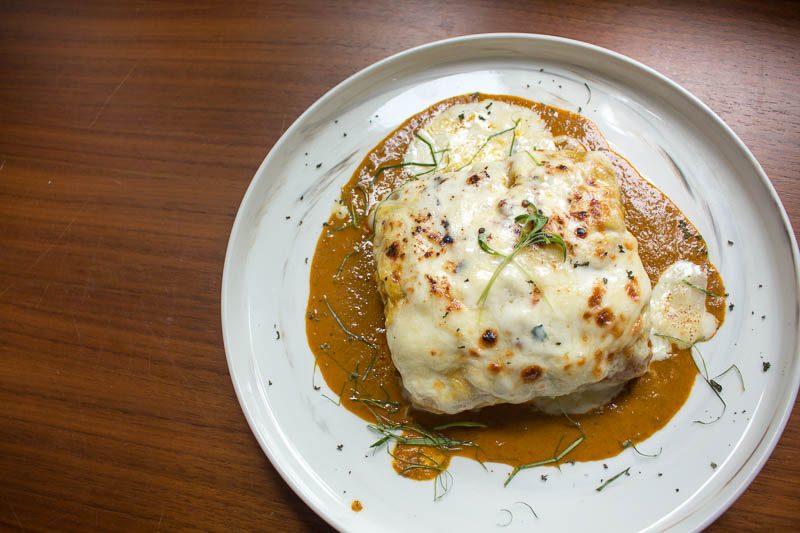 We decided to get a variety of mains, the first being the Chicken Rendang Lasagne (S$18). It was plated beautifully, and I was recommended to have it while it was still piping hot to relish it in all its goodness. 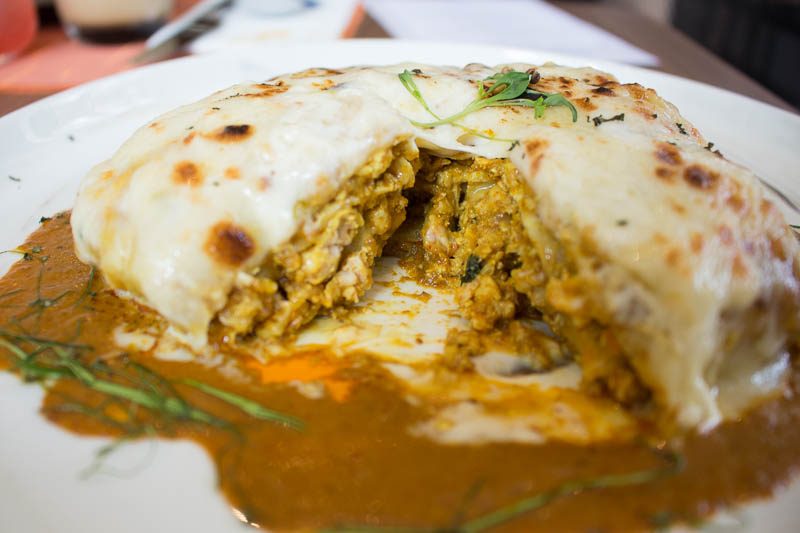 As I cut into it, I could see the multiple layers of pasta sheets and minced chicken. The combination of aromatic rendang and savoury cheese actually works. The cheese helped to mellow the heat from the rendang.

It also added a dimension of creaminess to the dish. Both flavours were distinct without overpowering each other. However, the minced chicken was kind of dry, making it less enjoyable than it would have been. Nonetheless, it is a good twist on the classic and the rich spiced gravy was a nice touch to add more dimension to the dish. 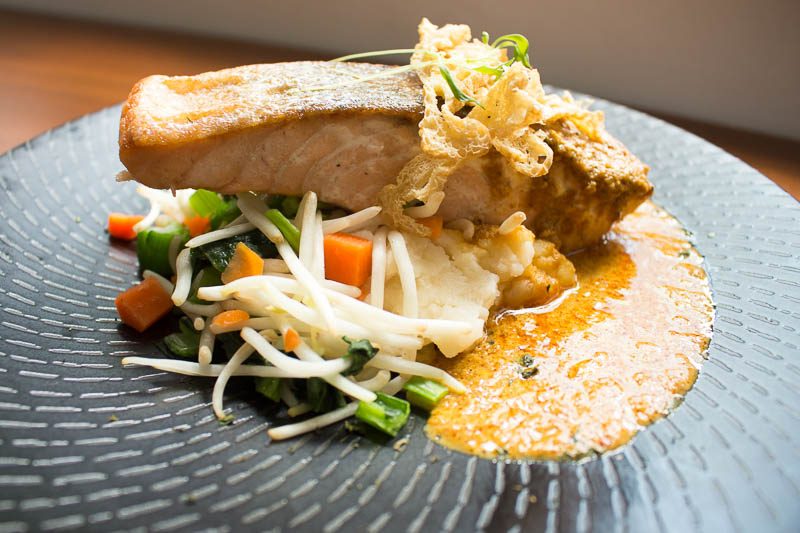 The Laksa Salmon (S$26) was another dish that was a stunner, I think y’all get the drift by now that all their dishes are definitely instagrammable. This is a safer option for those who are dipping their toes into Peranakan cuisine. 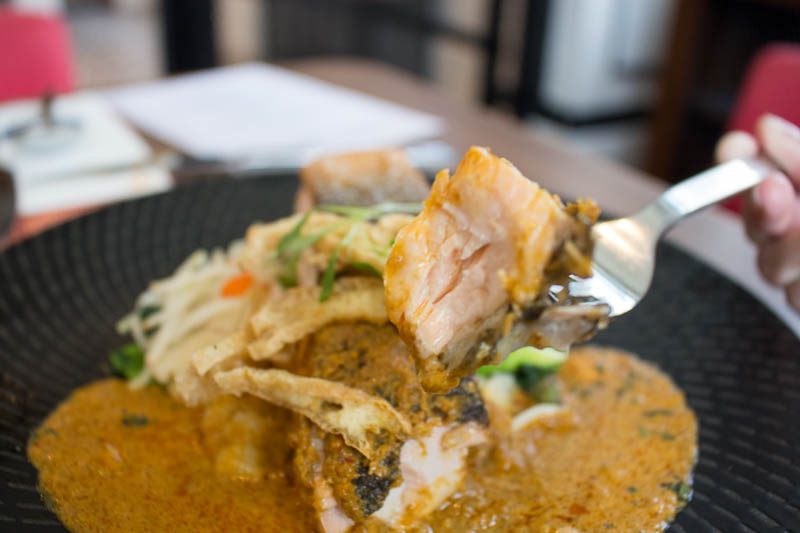 The huge slab of salmon was fresh and flakey, with a subtle sweet aftertaste. It went in harmony with the laksa sauce that was both creamy and coconutty. The spices made it very fragrant as well, which enhanced the flavours of the greens on the side. The beancurd puff did not add much to the dish but it was a nice touch to the laksa element. 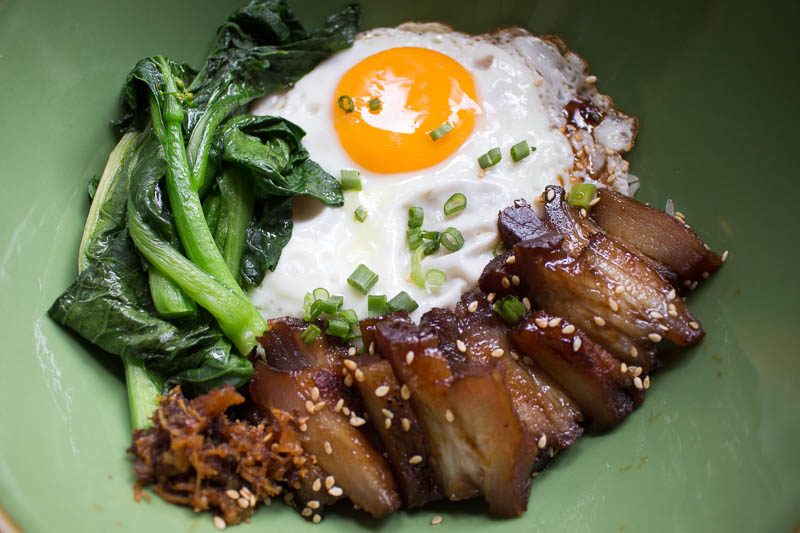 The last was the X.O Pork Belly Char Siew Rice Bowl (S$19). It came highly recommended as it was one of their customers’ favourites. As I caught a whiff of the fragrance from the rice (thanks to the shallot oil), I could not wait to dig in. As I broke into the yolk, I was glad it was oozy and runny. It acted as a binding agent to integrate all the ingredients of the bowl together as one. It coated the fluffy rice well and enhanced the flavours in the bowl with its extra richness. I also appreciated the greens that made it a well-balanced meal. 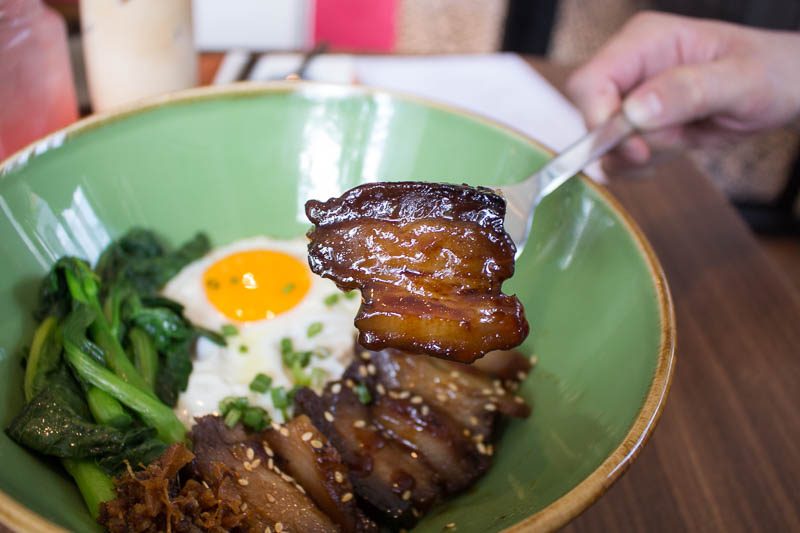 The thick-cut char siew looked promising with its glistening well-charred exterior. Unfortunately, the lean parts were a tad too tough. But luckily, the ratio of lean meat to fats was on point, which made it salvageable.

Dip it in the X.O sauce on the dip to further elevate the flavours of the char siew. Overall, it was still a relatively decent dish that I enjoyed, especially the rice that was well prepared. 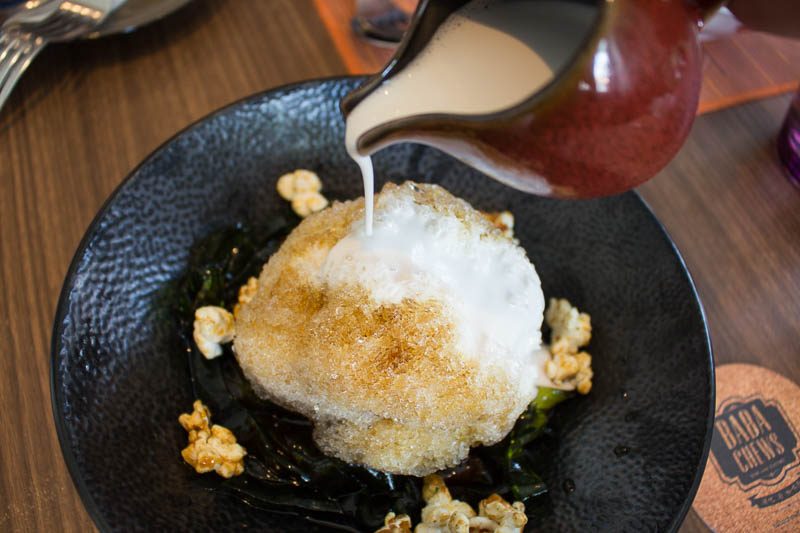 We also got some desserts to round up our meal, starting with Baba’s Chendol (S$10). Chendol is one of Singapore’s well-loved desserts and I was looking forward to seeing Baba Chew’s take on it. It was served with chopsticks, but we will get to that. I poured over the coconut milk that was served on the side and dove into it. 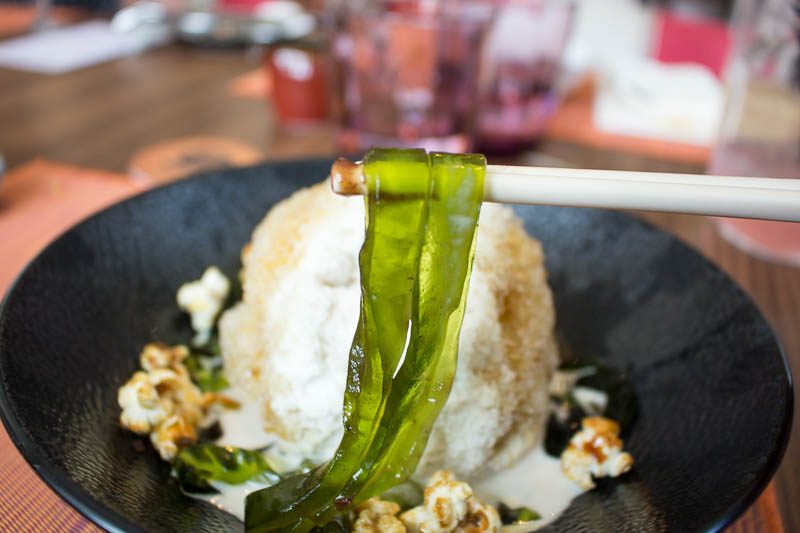 These bright green worm-like strands were unlike what we usually see in Chendols’, warranting the use of chopsticks. It tasted different to; silky smooth but still retaining a nice bite. The usual ones are way too floury for my liking. The red beans were also made into a mousse, with the right amount of nuttiness and grittiness.

However, I did feel that there was too little gula melaka and too much coconut milk. This could be on me as I added almost all the coconut milk they gave me. Oops. Also, the gula melaka popcorn felt extra as it did not bind well in my opinion. 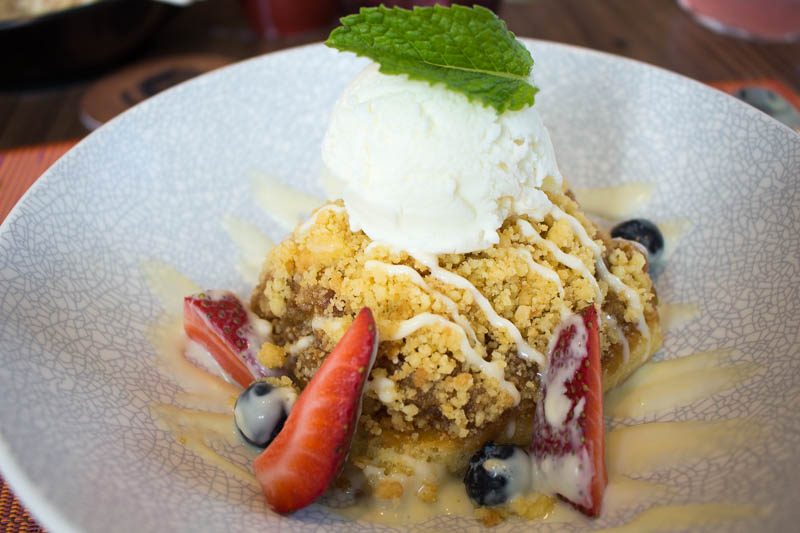 The second dessert was the Warm Apple Crumble (S$14). To be honest, I did not have high hopes for it since it was not a Peranakan dish. I was proven wrong as it turned out to be the best apple crumble I’ve had. It’s a classic done right. 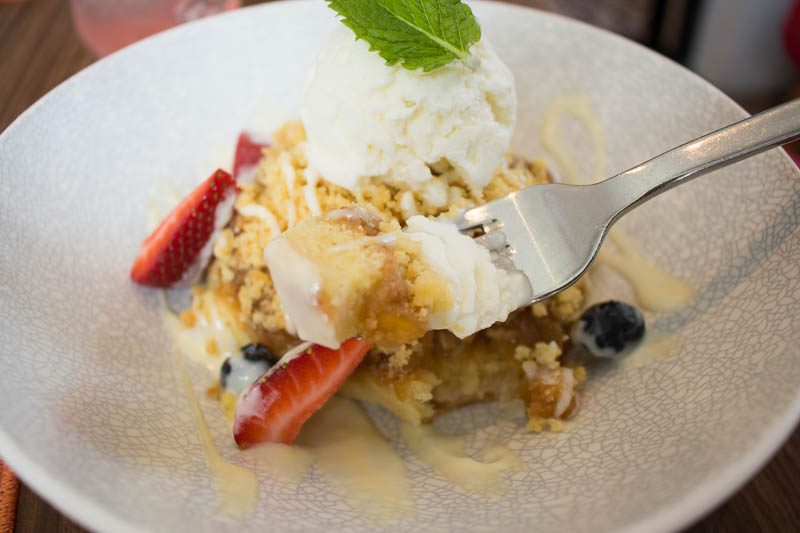 The biscuit base was moist and buttery, which went perfect with the sweet caramelised apple and raisin mixture. It was appropriately mushy with delicious chunks, topped off with almond crumble for a nice crunch.

The vanilla ice cream was smooth and soft, with fresh berries for a tangy touch. The varying textures and tastes came together perfectly in one bite and I couldn’t help myself for seconds, even thirds too. I’m not sorry — it was that good. It was a perfect balance between warm and cold, sweet and savoury. 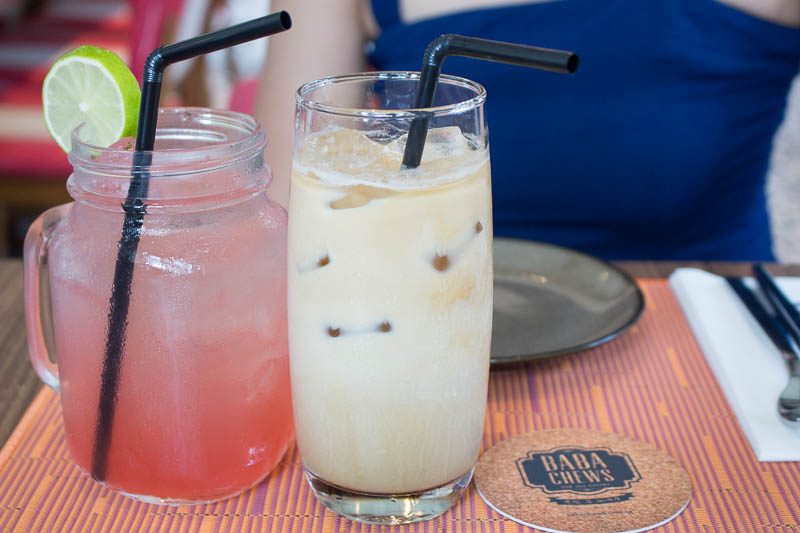 The food at Baba Chews is definitely of good quality and the portions are pretty decent too. We also tried their drinks and they were up to standard. The coffee beans come from Common Man, and they concoct their own sodas too.

I do think the new fusion menu is approachable for those who are unfamiliar with Peranakan food. With the combination of Western food, it is more palatable to a wider audience.

However, I personally would rather have my Peranakan food the traditional way. It is a good effort from Baba Chews to be inclusive towards all diners of various tastebuds. If you love both Western and Peranakan food, Baba Chews may just be the place for you.