Ah, frogs. They’re my least favourite amphibian from how they look, but that won’t stop me from having delicious frog legs in Singapore.

The older generation will list the benefits of frog meat, like improved vitality and toxin removal. But I know what the health-nut millennials really want to hear: frog meat is a finer choice of meat, having less fat than chicken breast for the same amount of protein, minus the dubious steroid injections.

Singapore frog porridge is generally served in two ways. The first is a simpler, unembellished version in which the frog is boiled directly in a pot of plain porridge. The second involves cooking the frog in a dense soy sauce, flavoured with assorted items like dried chilli or ginger and spring onion, then having it with a separate bowl of porridge.

My love is reserved for the second style, with its glorious combination of savoury gravy, sticky porridge and the unique, springy texture of frog meat. (It also really helps that I suppress all memory of what a bullfrog looks like when I eat.)

I really jumped right into compiling a list of Singapore’s best frog porridges. 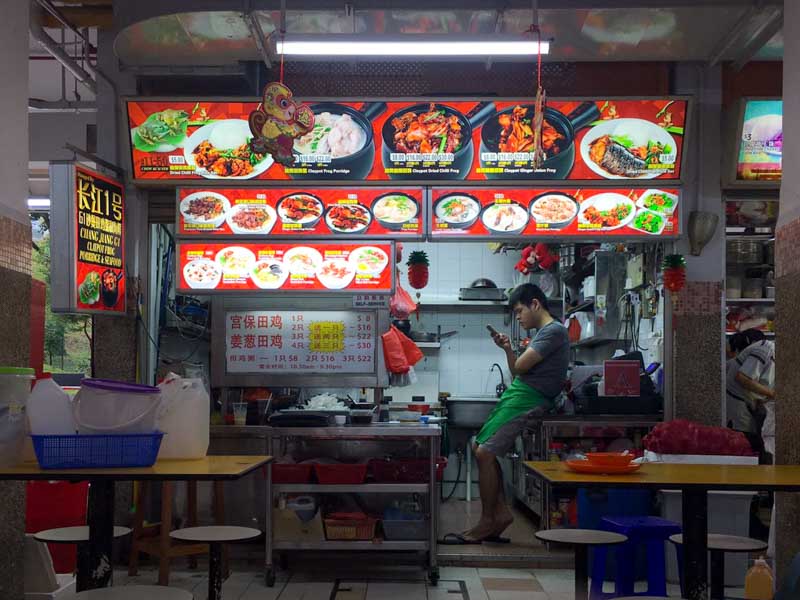 Located conveniently within walking distance of Chinatown MRT, Chang Jiang G1 ought to be everyone’s go-to frog porridge. What I find great about Chang Jiang G1 is their individual portions of frog porridge, priced at an unbelievable $5! Their gravy was dark and spicy, and stirred into their plain porridge, was truly a delight to eat.

You’d expect a stingy amount of frog for such a pricetag, but Chang Jiang G1 was extremely generous — I found 4 frog legs in my bowl and a number of other froggy parts. This was the most affordable frog porridge I found. 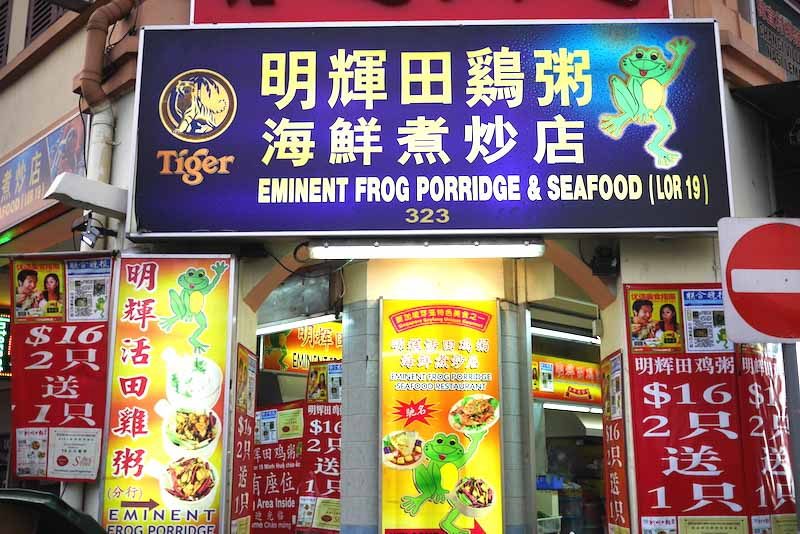 Eminent occupies a special spot in my heart, having been the stall that served me my very first bowl of frog porridge when I was little. I love that Eminent’s frog porridge is consistently on point, delivering velvety porridge and tender frog meat every single time I’ve visited.

What’s more, their porridge is also relatively affordable as they run a Buy Two Get One Free promotion that increases with the number of frogs you buy.

Eminent also has a number of unique offerings that can only be found here, such as Special Frog with Garlic and White Pepper and Homemade Chilli Frog (both $8/$16/$22). I had the latter once, and the flaming hot chilli-crab style sauce that came with the frog was so shiok. If you’re looking for frog porridge, you’ve got to try Eminent. 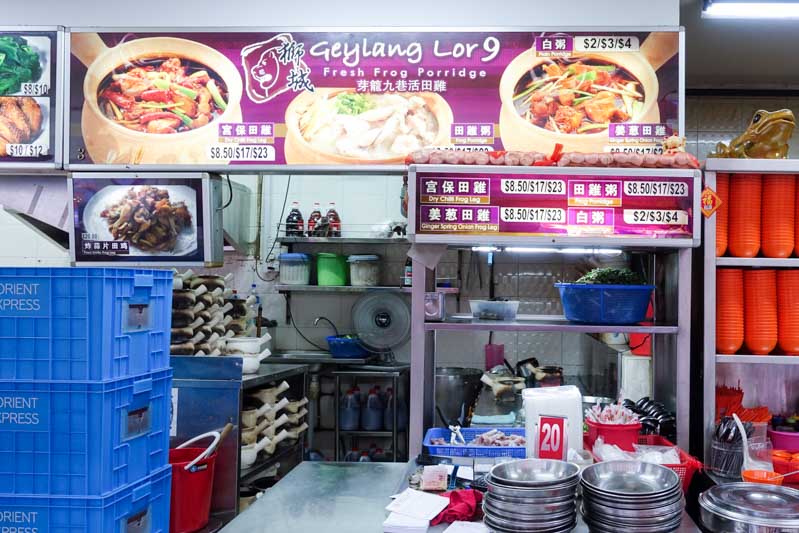 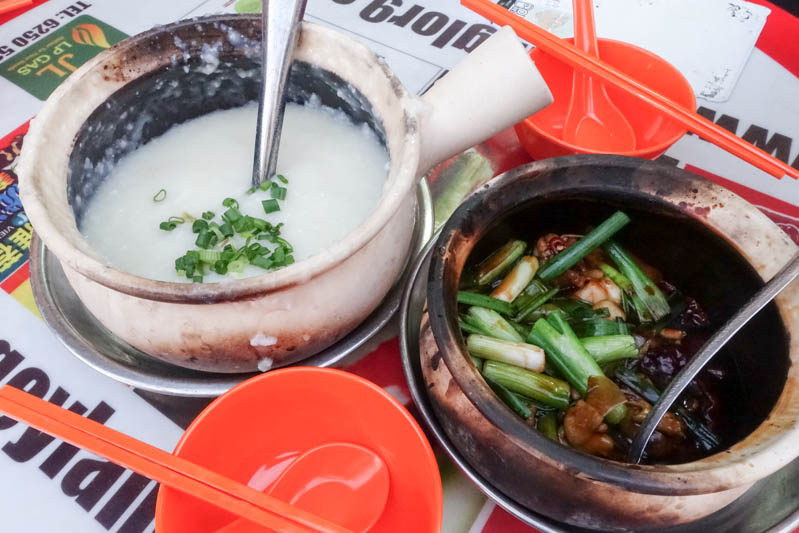 Lion City Frog Porridge lies along the never-ending Geylang Road stretch, and is the perfect late night supper spot. Of all the stalls I’ve tried, Lion City errs on the pricier side, but makes up for the cost by delivering a solid, dependable bowl of frog porridge. Their frog meat is quite tender and the rich and spicy Gong Bao sauce goes exceptionally well with the thick, grainy porridge.

Funny story, I spent half an hour trying to find Shi Cheng 狮城 Frog Porridge after my visit to Lion City, only to realize the two different names refer to the same place. So if you’re looking up frog porridge online, don’t be misled into expecting two stalls at Geylang Lorong 9 – there’s just one, and a real good one at that. 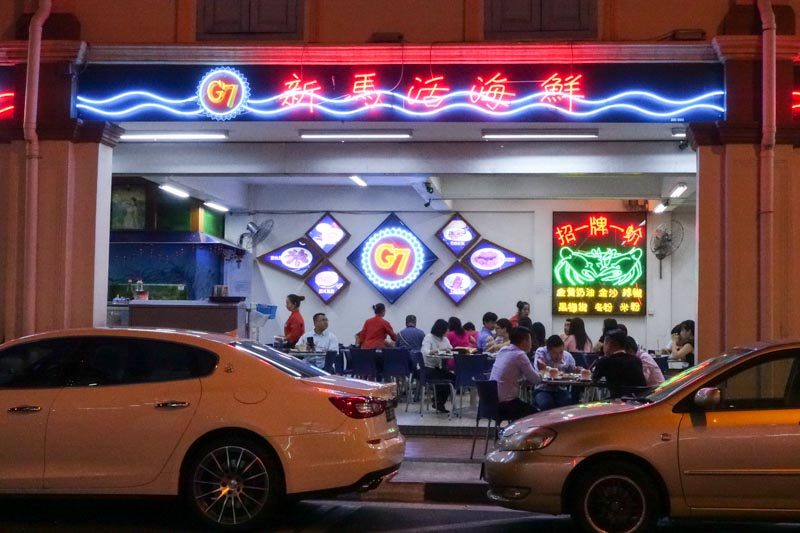 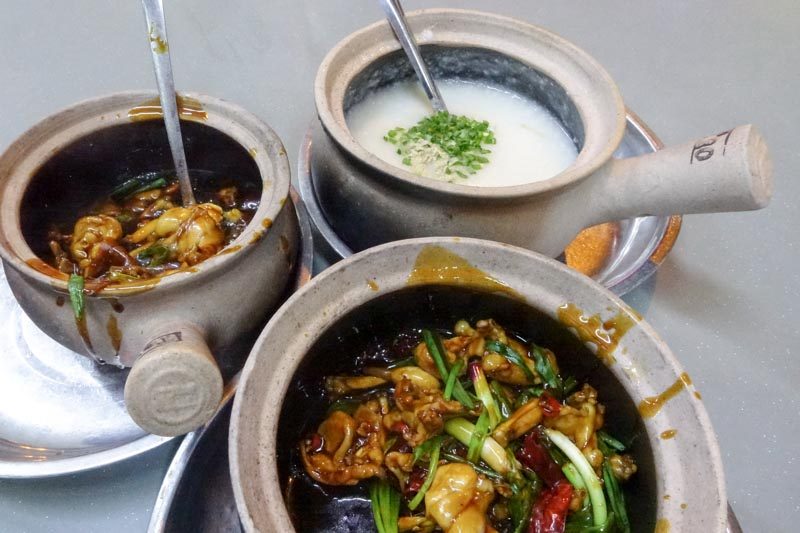 G7 Sin Ma Live Seafood Restaurant is a rather popular spot for frog porridge. I visited this place on a cold evening and oh, it brought me unspeakable joy with its bubbling hot clay pots and smooth porridge. The gravy itself was rich and not too spicy, although a tad salty for my liking.

G7 Sin Ma is absolute value for money if you’re planning to share. A single frog is priced at $8. If you get two frogs, they’ll give you one for free. Buy three and they’ll throw in two frogs AND porridge. Yada yada, you get the idea: MORE FROGS FOR LESS. I had 5 frogs done two ways for only $23.50! (G7 Sin Ma does charge GST, don’t be a miser.) 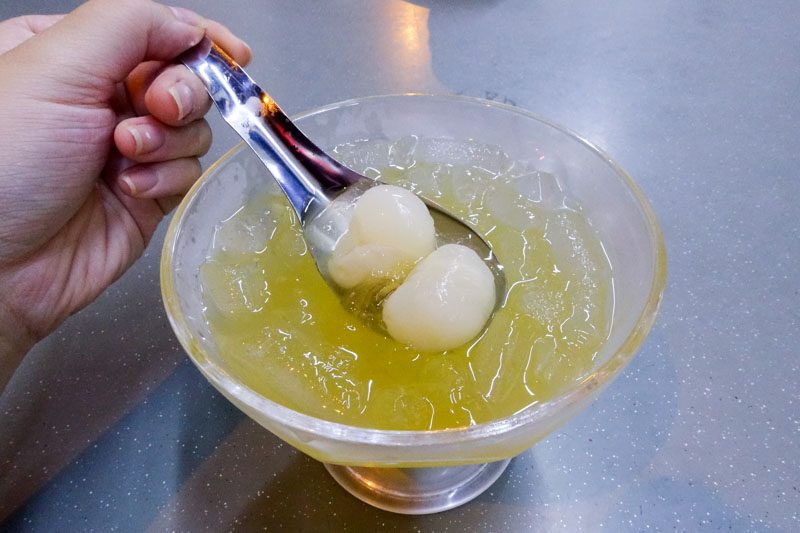 Also, they serve Honey Lemon Ai-Yu ($3.50) drink, basically a pimped up version of my childhood favourite drink with longans and wobbly jelly cubes — a great refresher after a heavy meal. 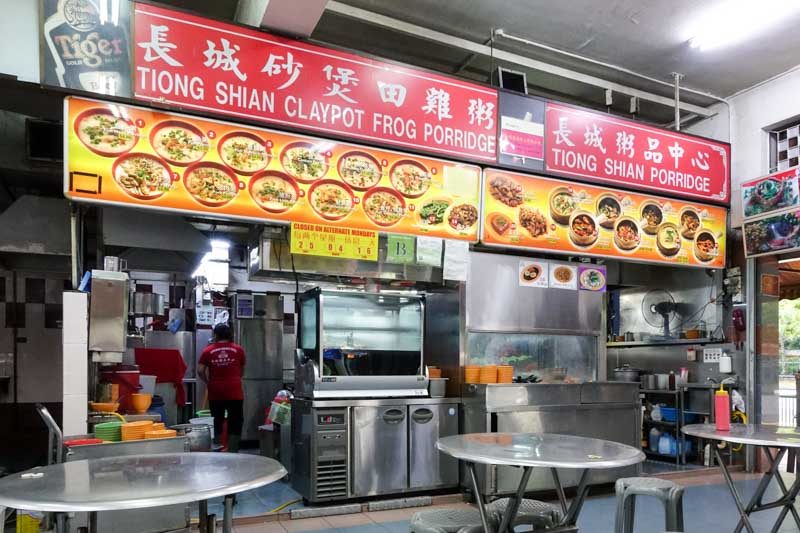 Like its name suggests, Tiong Shian Porridge Centre offers an extensive list of porridges. I was pleasantly surprised by their Claypot Frog Porridge, which came with large cuts of spring onion and frog meat.

The porridge base itself was starchy and well seasoned enough to hold its own without the assistance of any other sauce. I detected a hint of cooking wine in the porridge which gave it a rather nourishing, homely feel.

If you’re feeling indulgent, you have the option of adding on a Braised Egg (滷蛋) to your porridge for a dollar or so. 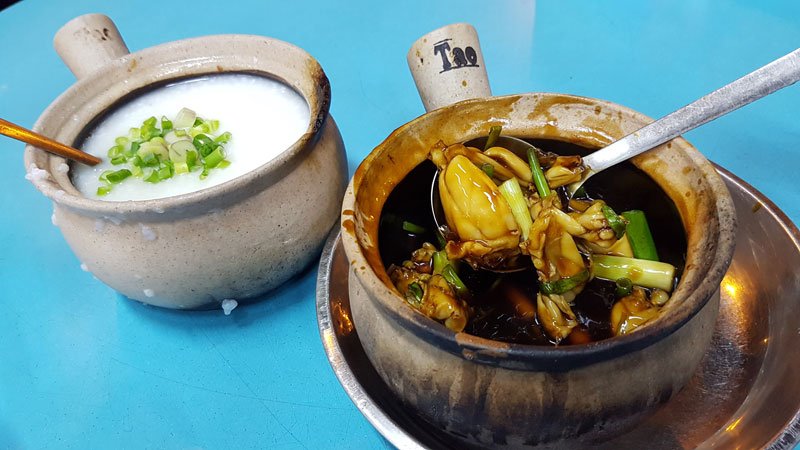 Hong Chang is an old favourite that I frequent en-route to my Grandmother’s place. It’s a quaint little eating house in an unassuming corner of Braddell Road, but it’s a gem not to be missed. They stir up a very fragrant Ginger Claypot Frog Leg, that pairs wondrously with thick porridge. I like that their sauce is thinner and lighter in flavour, so the original taste of the frog meat isn’t lost.

Not just known for frog porridge, Hong Chang also cooks up a mean Sambal Stingray and assorted zhi char dishes so you’ll be spoilt for choice.

Sheng Ji is located in the newly revamped Bedok Marketplace, so it boasts a quirky and stylish setting on top of good old hawker nosh. I think Sheng Ji is the perfect spot for people who want a bowl of frog porridge but don’t fancy the rowdy hawker ambiance typical of other stalls, so give it a try. I’ve heard great things about their Dried Chilli & Spring Onion Claypot Frog.

The self-proclaimed “Porridge Specialist” Sin Heng Kee offers more than 20 varieties of porridge. I was truly spoilt for choice, and eventually I chose the Dry Chilli Frog Leg ($8/$15/$22/$26) with a side of Sliced Pork Porridge ($3.50). The frog was fresh and good, but it was definitely the creamy consistency of the porridge that took my meal to the next level.

If you do visit Sin Heng Kee, get yourself a serving of Fried Dough Fritters (油条) ($0.80) as the crispy and crunchy fritters go unbelievably well with the salty porridge.

This one is for the Westies. JW 491, formerly Sixties Frog Porridge, offers a decent frog porridge at very economical prices. I had their Dry Chilli Frog Porridge one evening, and quite enjoyed it. Their frog meat had a good bite to it, and the gravy was satisfyingly savoury, with just the right amount of heat. 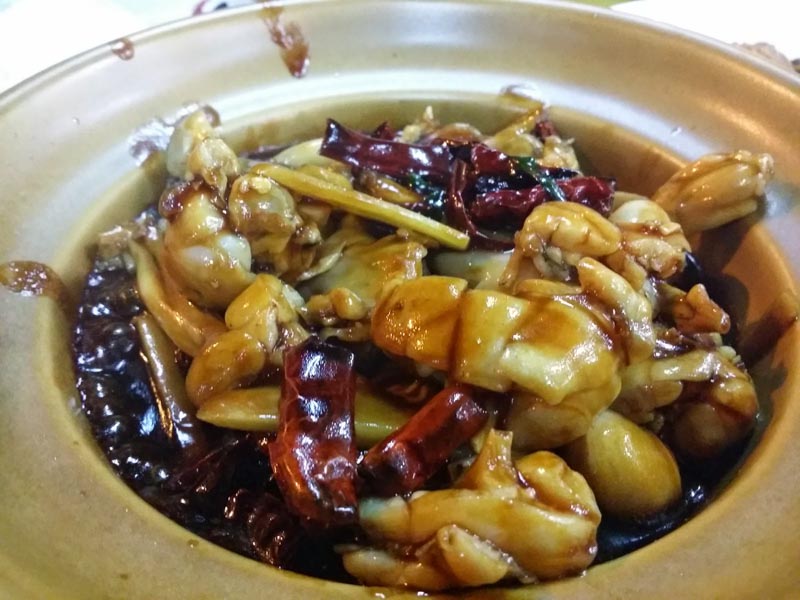 Wong Chiew Eating House’s frog meat was fresh and sweet, though I thought the gravy could’ve used more seasoning. That being said, Wong Chiew’s appeal lies in its 24/7 operating hours, so of course I had to add it in the list for anybody stricken with a massive craving at an ungodly hour.

At $18.90 for their Claypot Dried Chilli Frog Meat and $4.90 for a claypot of plain porridge, I’d be lying if I said A-One was an extremely affordable option. Still, I added A-One into my list of frog porridges because it brings something else to the table.

A-One Claypot House offers a more upmarket, restaurant-style frog porridge, so I’d recommend it to anybody looking to celebrate an occasion or have a bowl of frog porridge in a comfortable, air-conditioned setting.

Previous article5 Reasons Why Drinking Momo Juice is as Good as Being in Japan
Next articleGrandma’s Daily Pot: Classic Claypot Dishes in Maxwell Food Centre