Kaya Toast is a classic Singaporean breakfast, especially when served alongside a cup of kopi and two soft-boiled eggs. An oldie but goldie. There is good reason for the sustained popularity of such a simple sandwich: the sweet, pandan flavours of kaya (coconut jam), salty pat of butter, and mouthfeel of white bread make quite an irresistible combination.

Traditionally, kaya is served on thin, well-toasted slices of bread for a very crunchy, coffee dunk-able bite. However, there are many new renditions of Kaya Toast, usually swapping out the crispy toast for different breads: steamed, thick toast, french toast, crackers. You get the gist.

In this list, I have compiled some of the best Singapore Kaya Toasts that I find quite spectacular. However, I have omitted big, established kaya toast joints for the reason that they are so commonly known, I see no need to mention them any more.

Without further ado, a toast to kaya toast. Tucked away in Upper Boon Keng is Man Lai Kopi. Over here the Kaya Toast is only S$1. For that, you will receive a well-stuffed toast coupled with creamy kaya and melted butter. The result? A sublime kaya toast, marrying the traditional fluffy yet crisp, white bread.

Add S$0.80 to pair your kaya toast with quite possibly the best teh in Boon Keng. As their kaya toast are apparently quite popular with the customers here, be sure to get here early to get your kaya toast fix.

For a total of S$1.80, you’ll receive a full breakfast which is pretty affordable if you ask me. Besides, Upper Boon Keng Food Centre also has a wide variety of breakfast options to add to your kaya toast set. When I first heard of BABBA, I thought they were just another establishment trying to make it in the food scene with the false promise of authentic Peranakan food. After two visits, I can safely say how they execute their day and night menu amazes me!

I had to order the Homemade Kaya Butter Toast & Eggs (S$12) for the sole purpose of adding it to this article. And as a person who usually avoids having kaya toast at restaurants due to their hefty price tags, the one over here comes highly recommended (by me).

Expect to find Brioche buns that are toasted to golden brown perfection and filled with generous slabs of homemade kaya and French butter. If you want to know what love is, hop on over to BABBA for a quick kaya toast brunch today!

If you don’t already know, YY Kafei Dian is a retro Hainanese coffee shop with a subtle modern flair. It sells a range of old school favourites at affordable prices, and is known for baking their bread in-house. The traditional atmosphere is not one to be missed and is also air-conditioned making dining a breeze.

Over here, their Kaya Bun (S$1.20) is a must-try and is also dubbed as one of the best in Singapore. Why? Well, firstly, their buns are baked in-house and are incredibly soft and squishy. Secondly, the buns are stuffed with a generous spread of kaya and a slab of butter which makes the simple meal extremely enjoyable. Thirdly, did I already mention that fluffy buns are used?!

P.s. Their freshly-baked, old school sugar doughnuts are a worthy mention too. Pair the soft, fluffy, and sugary doughnuts with the Kaya Bun for an optimally nostalgic experience! Another contender worthy enough to be included in this list is none other than Traditional Delicious Food. Like Man Lai Kopi, they are located at the obscure Upper Boon Keng Market & Food Centre.

What makes them special is their Rainbow Kaya Toast. Yes, you read that right. Imagine a soft and fluffy rainbow bread, slathered with generous amounts of kaya and butter for breakfast. Pretty to the eyes and tasty to the mouth.

Personally, rainbow bread beats any other kind of bread; especially when paired with indulgent spreads. Tong Ah has been around for quite some time, but I only recently paid it a visit. The simple Chinese restaurant looks rather out of place along the hip, nightlife-rich Keong Saik Street, but is a welcoming sight to those seeking local flavour amongst all the Western.

Their homemade kaya had a dubious grey tinge to it and a runnier-than-normal consistency, perhaps for purposes of dipping your toast in it. If you’re able to look past appearances, the kaya has a strong coconut flavour and has just the right amount of sweetness to tingle your taste buds. It’s been more than two years since Chin Mee Chin closed down and Singaporeans had to bid goodbye to their old-school-style kaya buns and bakes, but clearly, their legacy has withstood the test of time.

Reserve the highest of hopes for Chin Mee Chin’s Toast (S$2.20) which blew me away completely. We’re talking soft brioche toasted over a charcoal fire, upon which the velvetest homemade kaya rests along with a perfect square of slightly melted butter. You might call me melodramatic, but if the toast asked me to elope in Las Vegas, I’d gladly accept.

It may not have the original vibes as it used to, but the outlet still exudes a nostalgic old school feel. I’m confident that they’ll be able to hold their own in the East’s saturated food scene. 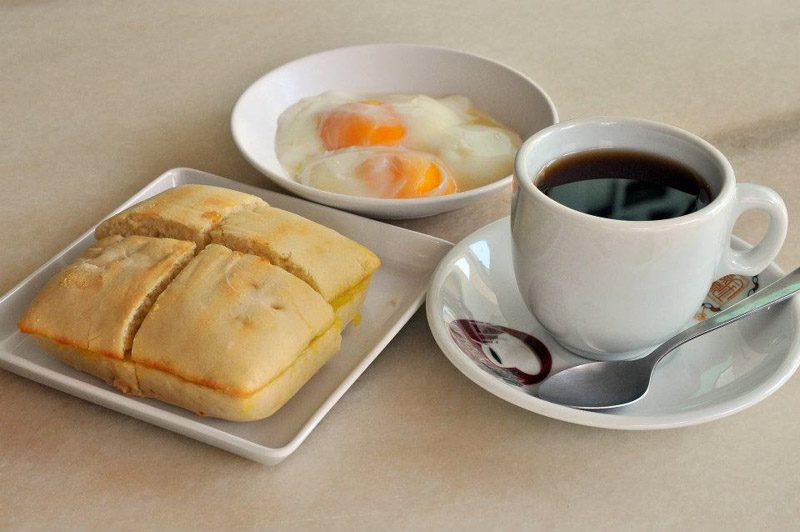 Their flagship store at Telok Ayer has closed down, but you can still enjoy Good Morning Nanyang Cafe‘s Kaya Toast at Maxwell Chambers or Far East Plaza.

I visited the one at Maxwell Chambers and had the most creative Kaya Toast on this list, the Orange Peel Ciabatta Kaya Toast (S$2.70)— the zesty bits of caramelised orange peel baked into the thick bread gave the whole sandwich an interesting fragrance that I liked.

There could have been more kaya or perhaps more layers cut into the ciabatta, though, as I found the bread-to-kaya ratio was rather imbalanced in favour of the bread.

Heap Seng Leong is an archetypal 70’s kopitiam that evokes all sorts of nostalgia in those belonging to Generation X and before. The coffeeshop is simple and understated, but exudes a certain charm or glory that I like because of its long history.

Prepared by the owner, an elderly man, a slice of Kaya Toast and a glass of traditional Kopi made using a coffee sock (!) will only cost you S$2.10. The Kaya Toast here is freshly made over the stove, and served warm and fluffy. I like the way the bread is done here, lightly toasted with a fat dollop of sweet kaya, instead of reduced to a thin crisp. 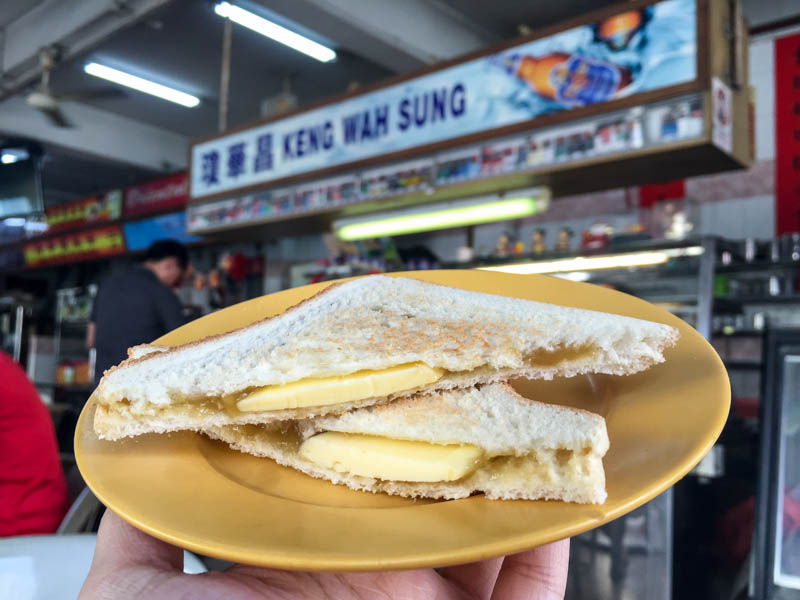 Set in a casual neighbourhood kopitiam, Keng Wah Sung is a humble drink stall serving ridiculously affordable Kaya Toast ($0.70 for two triangles). Visually, I wasn’t impressed when my order arrived as the bread used for this Kaya Toast was toasted sandwich bread, with all its crusts on.

However, its simple, basic look was more than made up for by its interior: a generous amount of thick, homemade Hainanese kaya and a large square of butter on BOTH halves of the sandwich— so much so that I was actually terrified for the woman after me who ordered her kaya toast “keh gu you” (with extra butter).

Cheap, with no-frills, and so, so delicious. Keng Wah Sung is definitely an underrated place for kaya toast. You can also take home their Hainanese kaya by the bottle if you can’t get enough of it.

With a slew of awards and media features behind it, Ah Seng (Hai Nam) Coffee is definitely worth visiting for kaya toast. On occasions when I visit Amoy Street Food Centre, I’ll always stop by Ah Seng for its Kaya French Toast (S$3.00) which is charcoal-grilled for extra aroma and Hainanese authenticity.

The French Toast is served with a double dose of rich, pandan-fragrant kaya: between the slices and with a dollop on the side. Admittedly, this isn’t a breakfast you should be having every day because it’s quite indulgent (as my doctor says), so you can opt for their Traditional Kaya Toast (S$1.60) instead, on a daily basis.

11 exotic dishes that can be found in Singapore