“The coming of Spring” Tucked along the seemingly long row of shophouses, we find ourselves at the doorsteps of Chikusen; an 80-seater restaurant which is headed by Chef Fabio which has more than 25 years of experience in the Japanese culinary scene in Singapore. 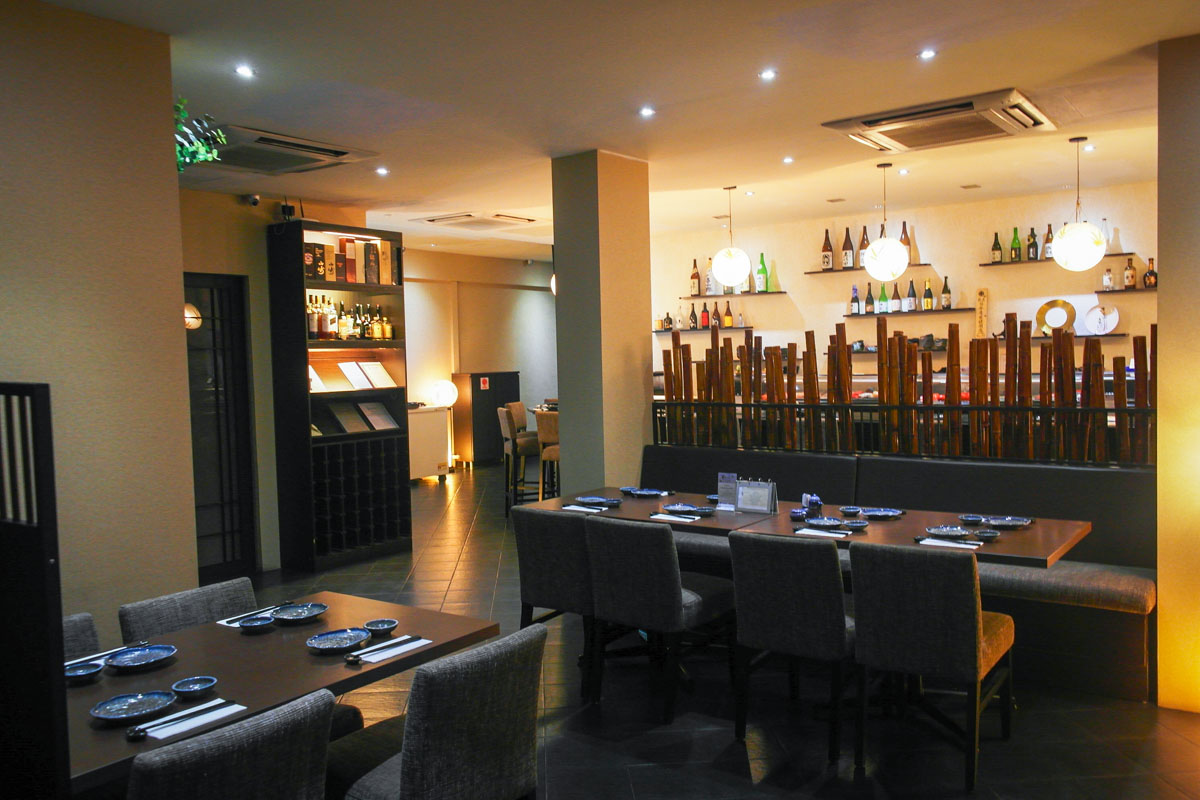 As we step into the restaurant, we were greeted courteously by the waiting staff which readily showed us to our seats. The general ambience of the restaurant was nice and cosy as the servers were very attentive which made me feel right at home. Additionally, I couldn’t help but notice that they had a good base of regulars as some of which were addressed by name. 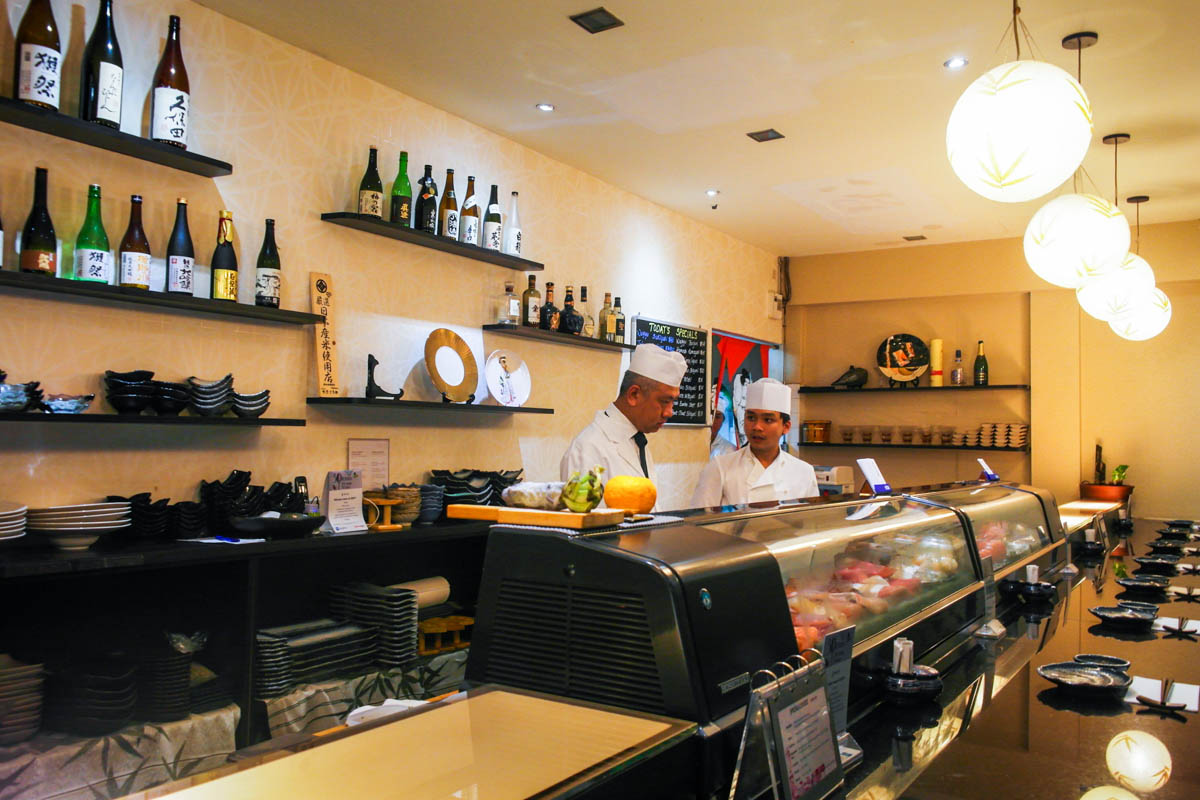 Ushering in the new season, Chikusen has unveiled its very own 7-course Spring menu which will be available from now till June 14. The following dishes will be a sneak peak to what’s available for this menu.

Priced at $138++ for 2, the reasonably priced 7-course meal also comes with a complimentary 300 ml serving of Sake; Kato Kichibee Junmai Daiginjyo Gold “Born”, for reservations made at least one day prior to your visit. 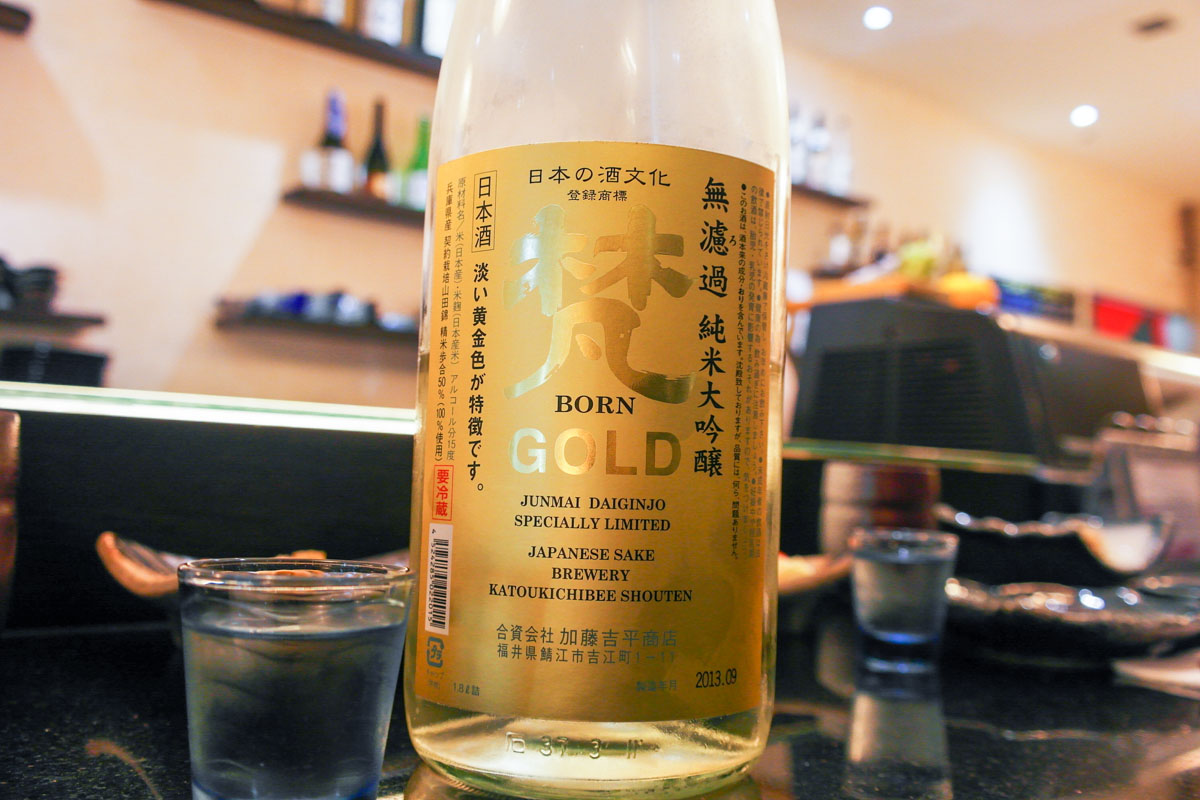 This cold sake is sweet, smooth and very easy to drink with your meal. Definitely recommended for sake fans. Starting off, the waitress brought us both the Nanohana; young spring shoots of the rapeseed plant which is best served in spring whilst its buds remain closed, and Freshly Grilled Bamboo Shoots which tasted nothing comparable to the ones that can be found in supermarkets.

The simple appetizers were subtly pleasant and refreshing as it allowed us to ease into our big meal ahead. Scarlet red and looking freshly crisp, the Momotaro Tomato is known as one of the most popular variants of Japanese tomatoes known for being sweet and rich in flavour. While the tomatoes are nothing short of perfect on its own, the tangy wasabi yuzu dressing on the side further enhances its succulence in more ways than one. 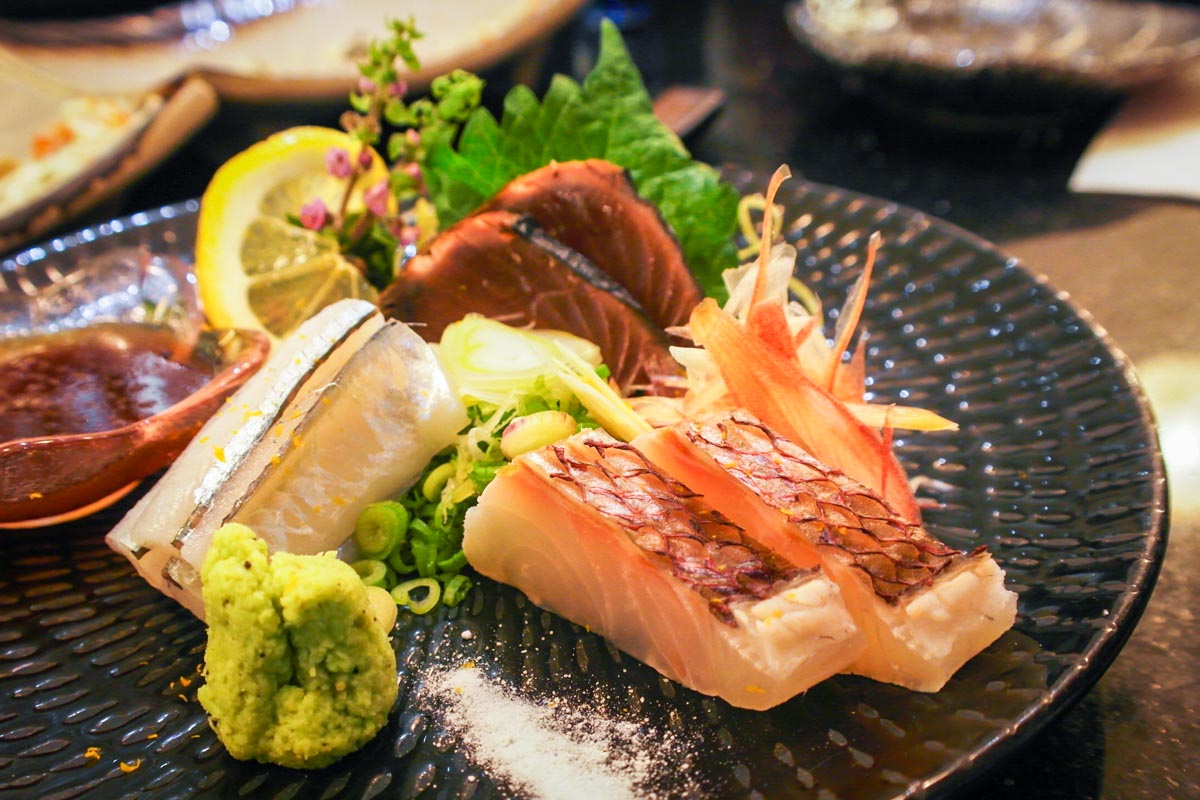 The Bonito-Sayori-Tai combination was one an interesting one as it provided a good range of flavours between the richly tasting Bonito and Tai and the subtle yet refreshing Sayori.

Belonging to the same family of fish as the Mackerel, the flavour and texture of the Bonito resembles tuna; retaining a dark red core with shades of grey under the skin which is left on since it is another tasty element of the Bonito.

The Sayori on the other hand is a smaller species of fish compared to both Bonito and Taii and was sliced into thin silvery-grey strips. Personally, i enjoyed this the most as it was more subtle compared to the other 2, and dipping this into the wasabi yuzu dressing made it tastier

Accentuating streaks of red on the whitish pink hued Tai was soft and tender and delightfully favourable. 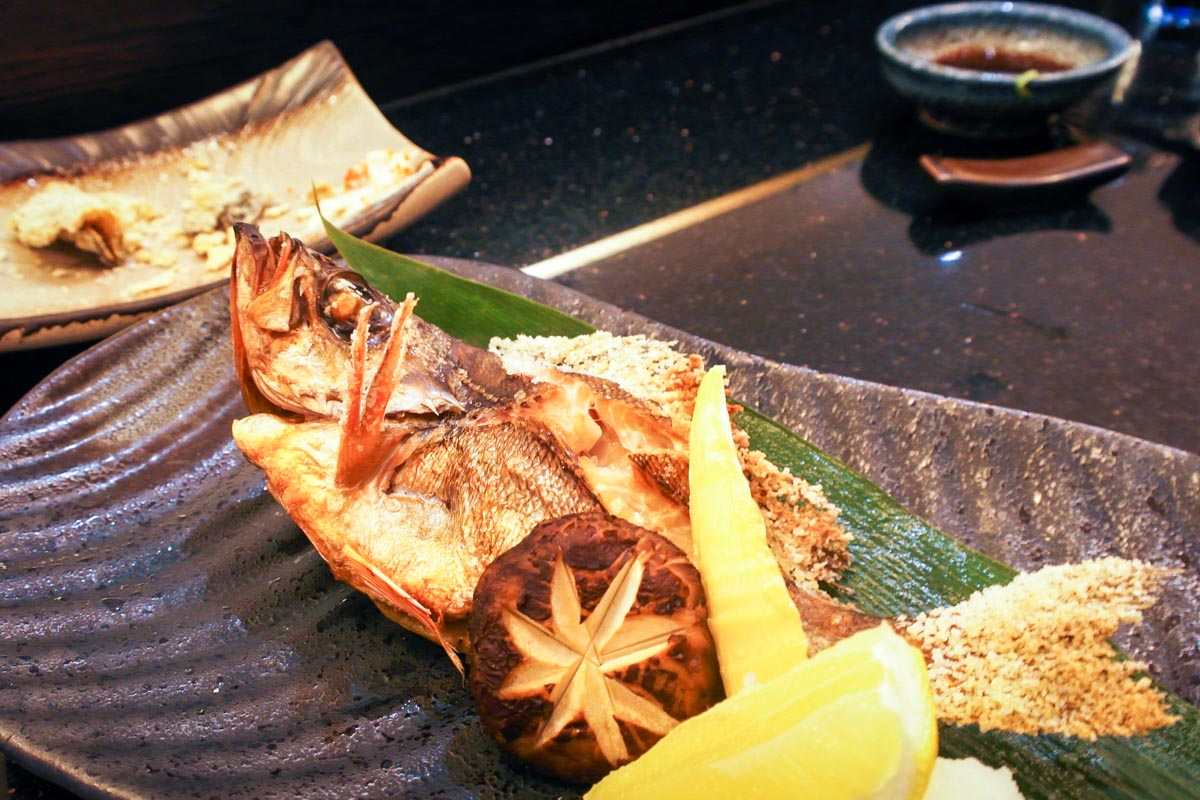 Certainly not the prettiest fish on the block, the looks of the Mebaru doesn’t do its taste justice at all. A nip at this left me a little surprised as there was a tinge of sweetness in its flesh. Oyster Shooter. Half way through the meal, Chef also let us try his oyster shooter which is similar to a Bloody Mary oyster shot- Tabasco flavours, a bit of sweet, sour and spiciness with the succulent oyster. 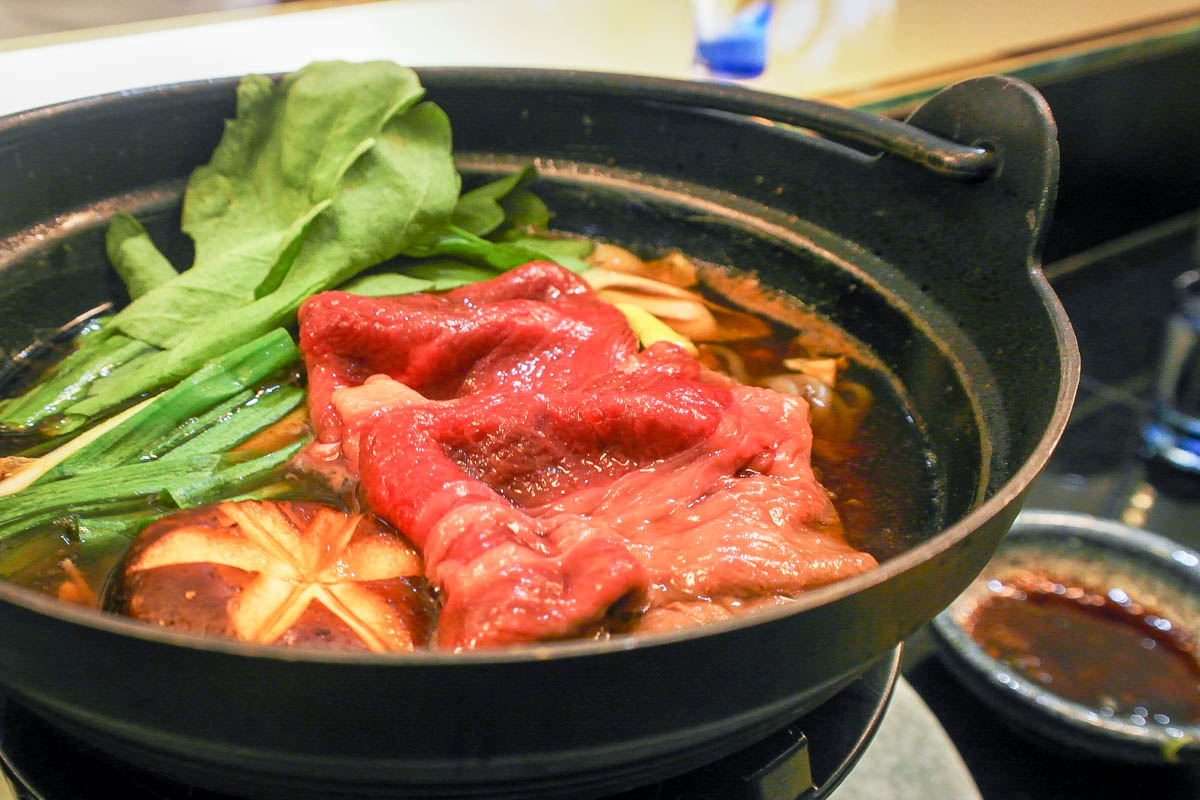 This was certainly the highlight of the meal where one would have the to choose between the Wagyu Beef or the Black Pork. Both options have their merits as the wagyu beef was really tender and went well with the Sukiyaki broth while the Black pork on the other hand was savoury and had a tad of fat which made it even more enjoyable. 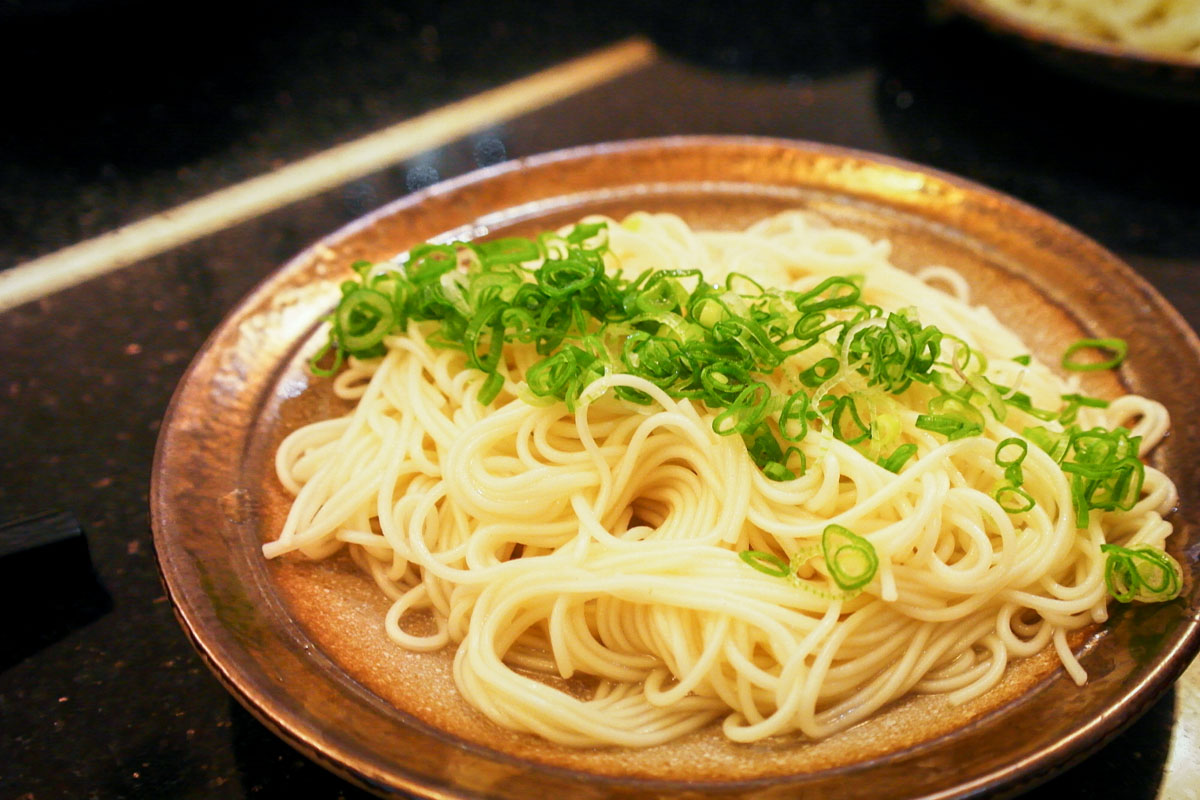 Less is more. In this case, the Yaki Somen is first boiled, then stir fried in fish stock and garnished with spring onions. Very fresh, clean yet tasty. 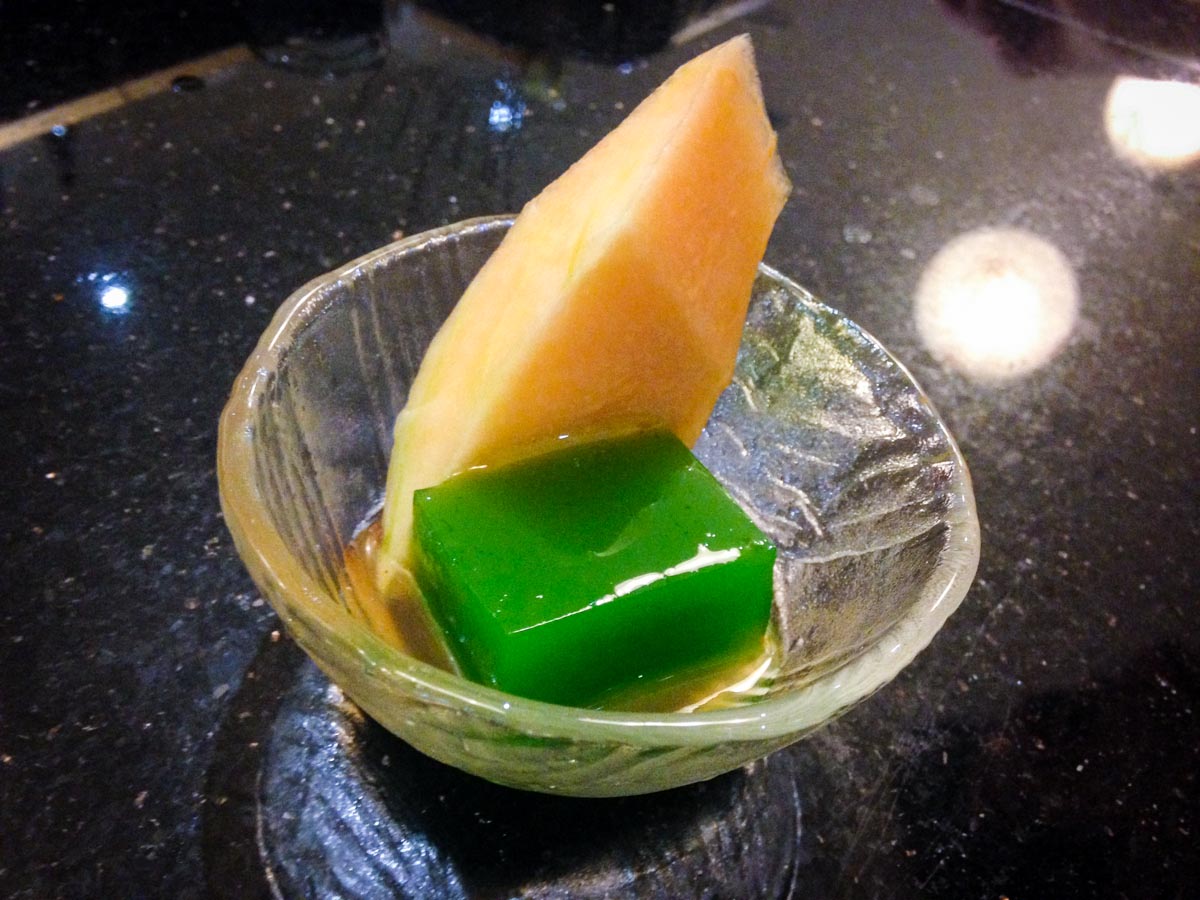 As far as the Ume Jelly was concerned, there was definitely more to it than meets the eye. Bringing the meal to a close perfectly, it was quite amazing that there was a perfect balance between how concentrated the plum flavour was and yet at the same time it did not come across as being too sour. 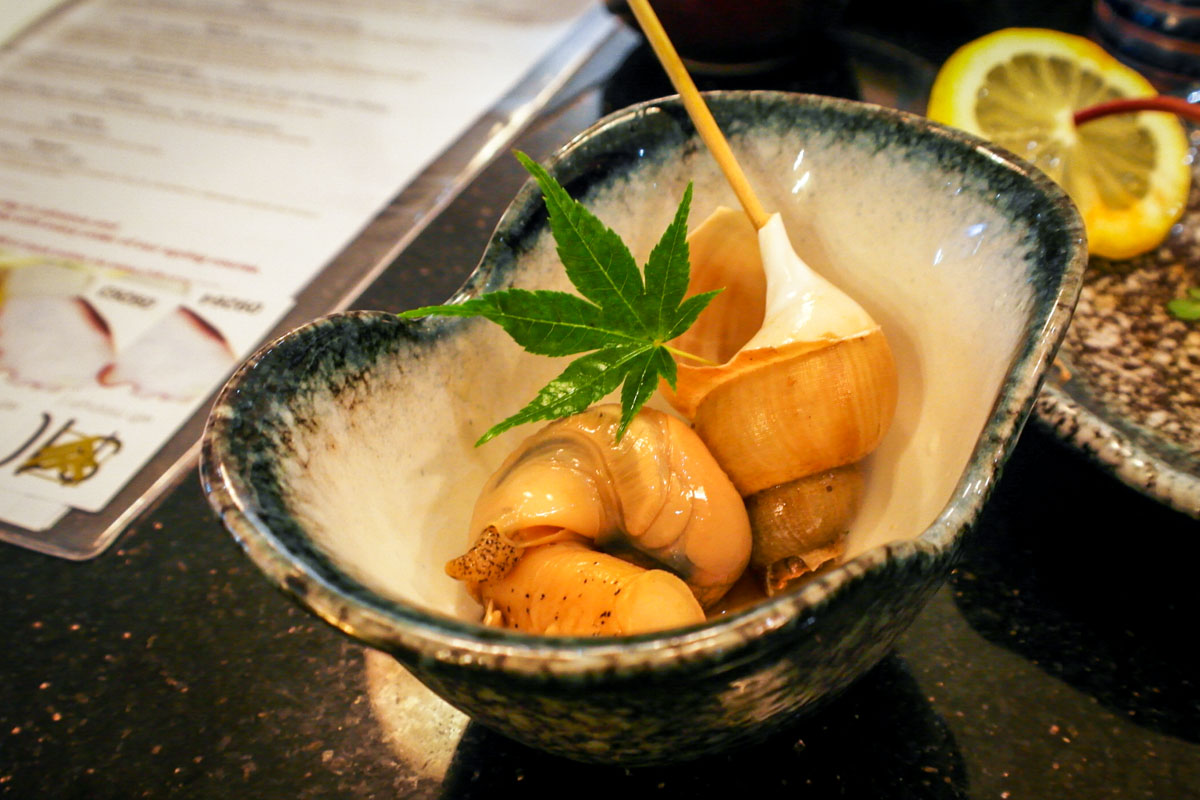 Chef also let us try some of his a la carte specialties like this boiled, fresh water snail. Meaty but certainly quite subjective in taste. 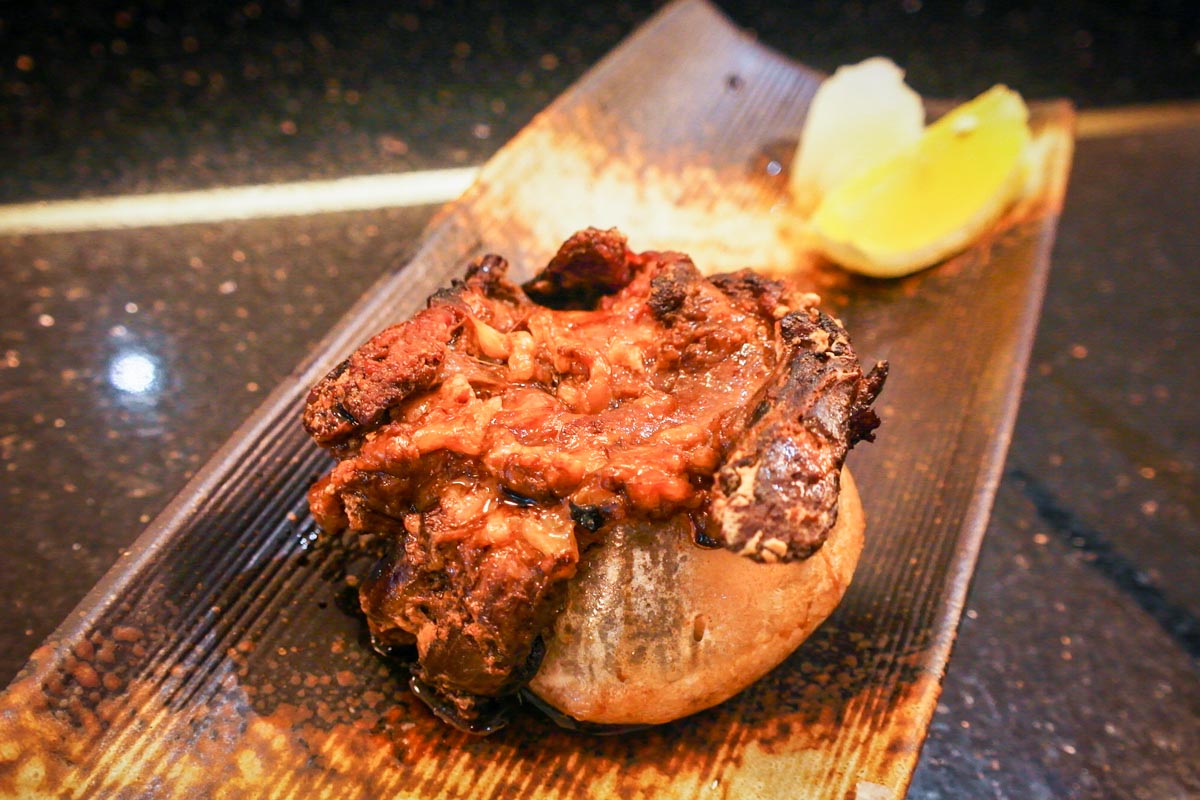 Bluefin Tuna Eye. If you thought things couldn’t get weirder, chef also has this huge DHA-fueled Bluefin tuna eye which might gross out some people. Lots of soft tissue all around for the connoisseurs, and after eating the insides, the socket is then deep fried to fully utilize every portion of the fish.

An excellent spread of Japanese dishes, Chikusen manages to keep their diners fascinated with varied and exotic items that are found often in Japan itself. Service was excellent, and Chef Fabio is definitely an amiable fellow to chat with over the counter.