Even though Chuan Heng Fish Ball Minced Meat Noodle singles out bak chor mee as its title dish, I’ve read raving reviews about its unique Beef Stew Noodles (S$5) and knew I had to give it a try. 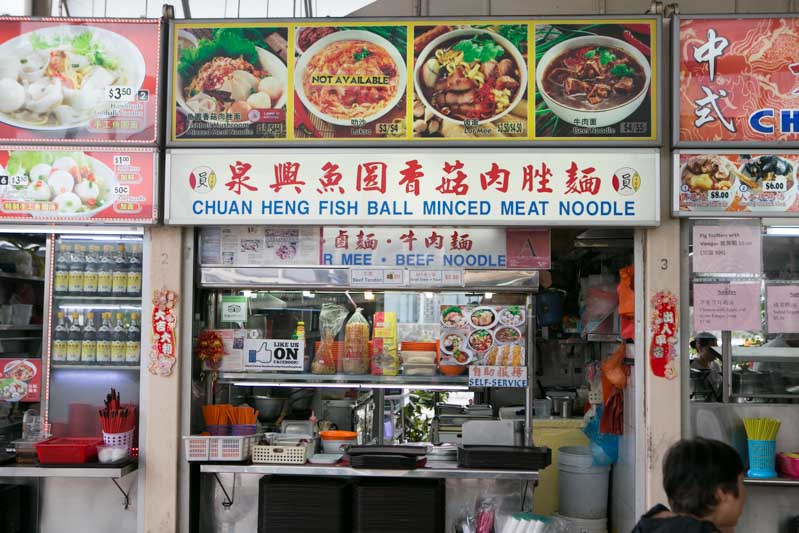 Nestled in Serangoon Gardens Market & Food Centre, this hidden gem has been around for more than 12 years.

It first started out as a humble stall in Ang Mo Kio Industrial Park 3, serving fishball noodles and laksa, before moving to Serangoon and adding more dishes like Beef Stew Noodles and Lor Mee to its menu. I ordered the Beef Stew Noodles (S$5) and asked for thick bee hoon. However, you can also ask for white rice, thin bee hoon, kway teow, or yellow noodles. The beef had been stewed for at least four hours, so it was definitely going to be tender and juicy.

My first impression of the beef noodles was that it resembled Japanese curry. The gravy was thick and had a slight orange-brown hue, and it was topped with coriander leaves, potatoes and bean sprouts. 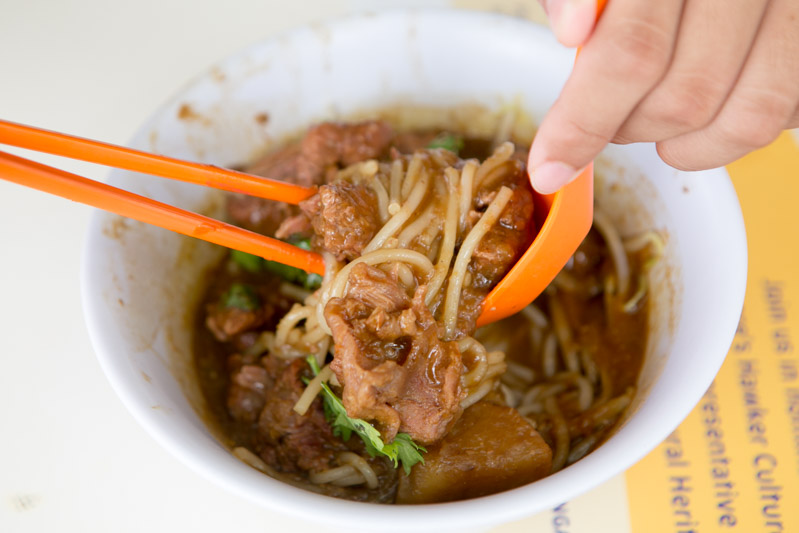 The beef came in large cubes and the stall owner was incredibly generous with the portions—I spotted at least eight to 10 beef cubes in my bowl alone. What a steal! 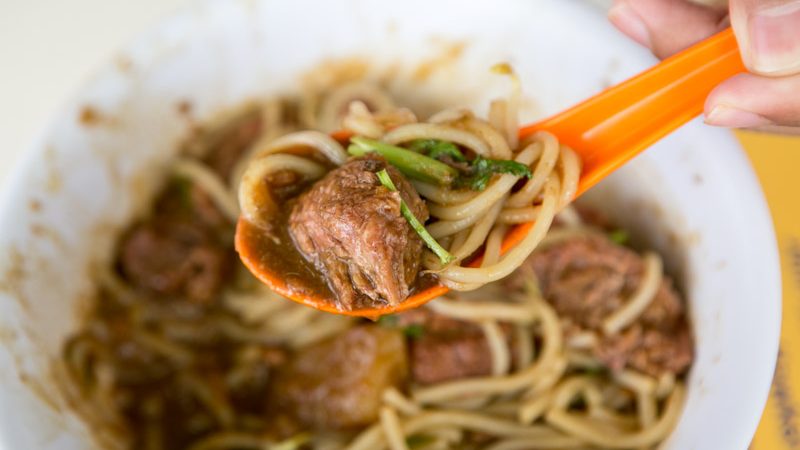 This was an absolutely delicious bowl of beef noodles. The gravy was smoky, rich, and meaty, just like beef stew, and I couldn’t stop slurping it up together with my thick bee hoon. Though the beef had been stewed for four hours, each cube was firm and retained its shape when I lifted it up with my pair of chopsticks. However, when I prodded at it with my utensils, the meat split apart cleanly, like an egg that had been cracked open.

The beef was incredibly juicy and soft, and I loved that Chuan Heng had used large beef chunks rather than thin slices of beef—it was super shiok to pop each cube into my mouth and enjoy the earthy and savoury flavours as the meat melted in my mouth. Mmm. You know how some bowls of lor mee have really watery gravy, such that it separates cleanly from the noodles when you slurp them up? Chuan Heng’s was the complete opposite—I got yellow noodles with my lor mee, and I loved how the thick, luscious and sticky gravy coated each strand of noodle really gorgeously.

Despite its stellar texture, I was a little disappointed because the lor mee was more sweet than acidic, and I couldn’t taste the zest from the ginger nor the spice from the chilli. I wished more vinegar had been added so that it’d be sharper and more tangy. 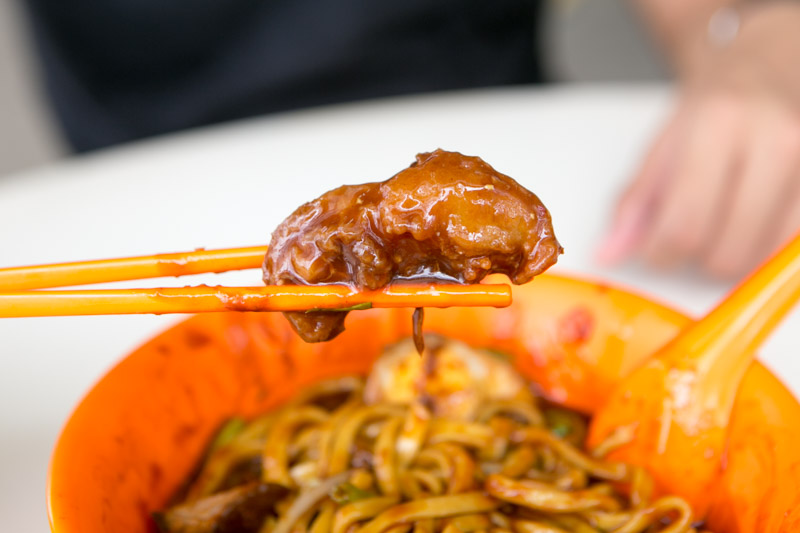 The one thing I enjoyed most about its lor mee was the fried fish.

Despite being soaked in the thick and sticky lor mee gravy for a good 15 to 20 minutes, the fried fish was still crispy and I heard an audible crunch when I bit into it. The fish batter was crunchy and salty, and the fish meat was soft, flaky, and sweet.

It was so good that I wished there was had been more fried fish in my lor mee—I counted only two pieces—but considering each bowl cost S$4.50, I’d say it’s still a reasonably generous serving. 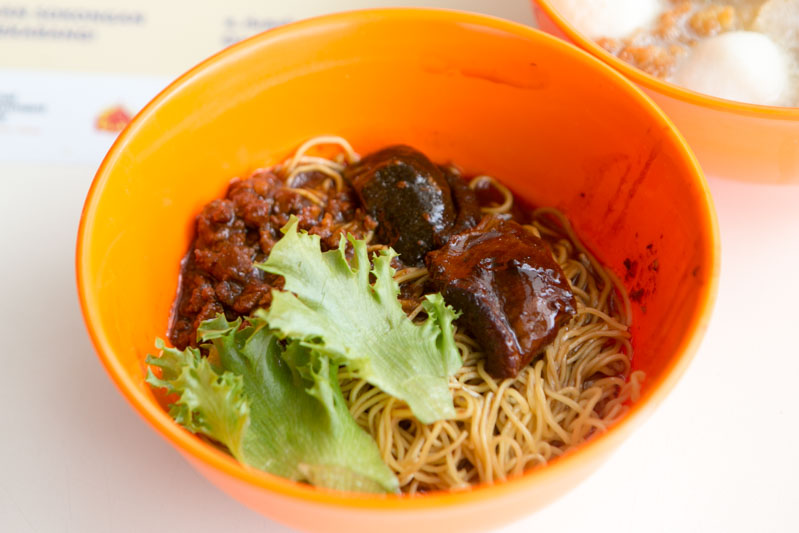 The Signature Noodles (S$4.50) came with a bowl of braised pork rib noodles and a separate bowl of soup.

When I asked the stall owner what exactly made this bowl its “signature” dish, she replied cheekily: “We created this dish from scratch, so it’s very unique. We wanted to make something like Mini-Wok Noodles, but include our braised pork ribs.” 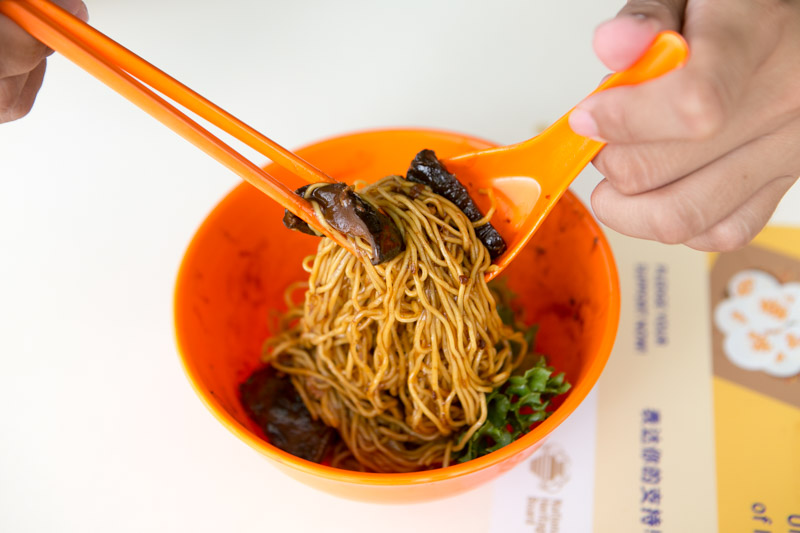 I expected the braised pork ribs noodles to be savoury and meaty, but it was surprisingly zesty and tangy because a good amount of vinegar had been added.

As I continued eating, I could taste a mellow sweetness, as if Chinese cooking wine was used. It gave the dish an extra fragrant oomph, which was complemented by the earthiness from the shiitake mushrooms.

Chuan Heng is such a hidden gem. All the dishes are below S$5 with incredibly generous portions, and the noodle dishes are all flavourful and delicious.

The Beef Stew Noodles was comforting, the Lor Mee was sinfully indulgent, and the Signature Noodles was savoury and piquant. If I had to pick one dish out of the three that I tried that day, I honestly wouldn’t be able to give you an answer!