When trawling the streets of Syed Alwi Road, you’d expect to see a plethora of Indian restaurants. From North to South Indian cuisine, you’re pretty much spoilt for choice. But what Copper Chimney offers is a slight deviation from all that. 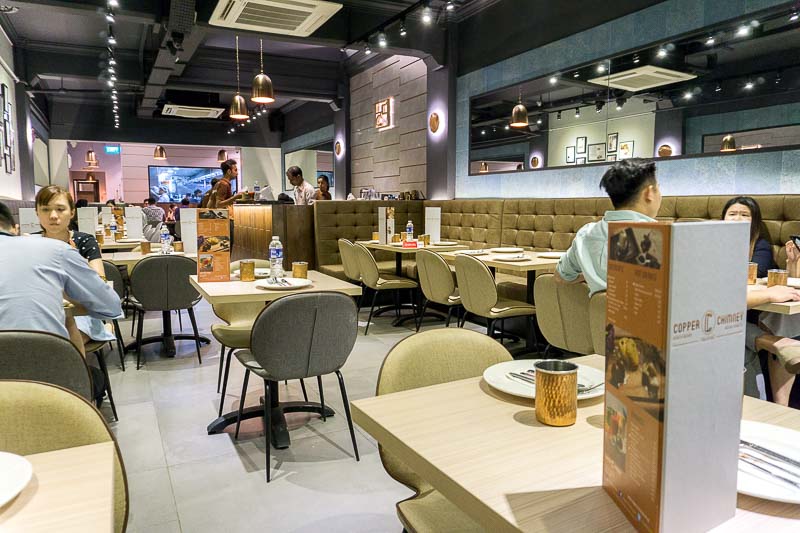 What’s more, it recently attained halal certification along with a new menu, so there’s no better time to pay it a visit than now! Start your meal off with Mango Lassi (S$7.35) and Mint Calamansi (S$6.30). Between the two, the latter won me over. I really enjoyed the bright, light and refreshing notes of the mint that readied my palate for the decadent meal ahead.

The Mango Lassi was great in that it wasn’t too thick nor too cloying. But if you drink a lil’ too much before you even start eating and you’ll end up being too full to be able to enjoy the feast that awaits you! When the Masala Roomali (S$8) arrived, everyone at the table turned their attention to this massive thin bread. Littered with onions, tomatoes and masala seasoning, it’s baked till crispy over an inverted oven. 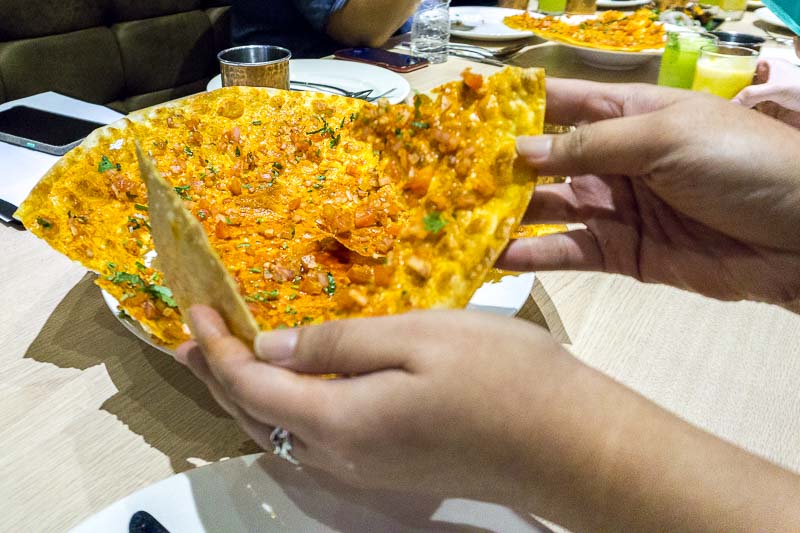 We were shown how best to enjoy it: folding it several times to form beautiful uneven cracks, making it perfect for sharing. Given its thinness, it was so easy to enjoy and was probably the only bread all evening that we finished.

The use of tomatoes and onions really added a good touch of zing to the peppery masala seasoning, and we couldn’t keep our hands off of it. 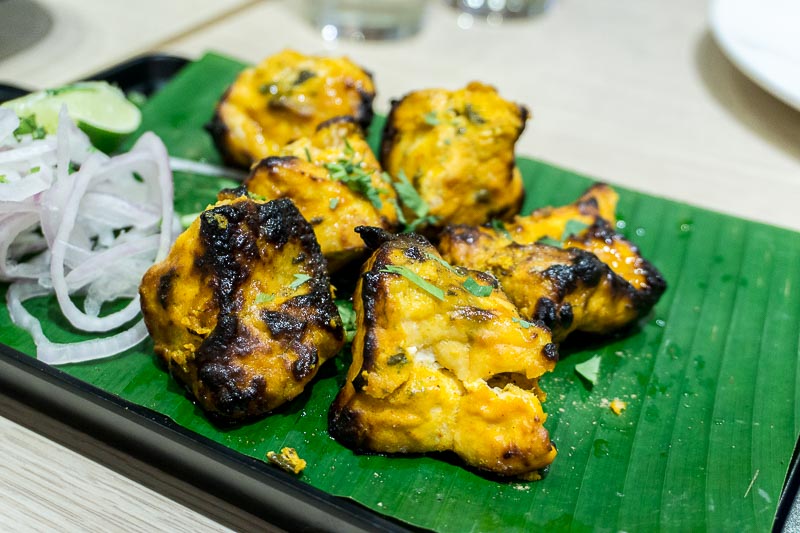 I love a good fish dish, and I was elated to see the Salmon Fish Masala (S$18). Made right in the Copper Chimney’s custom-made tandoor, the salmon broke apart in my mouth with little effort.

The charred ends were my favourite bits and the flakiness of the fish signalled succulent flesh. 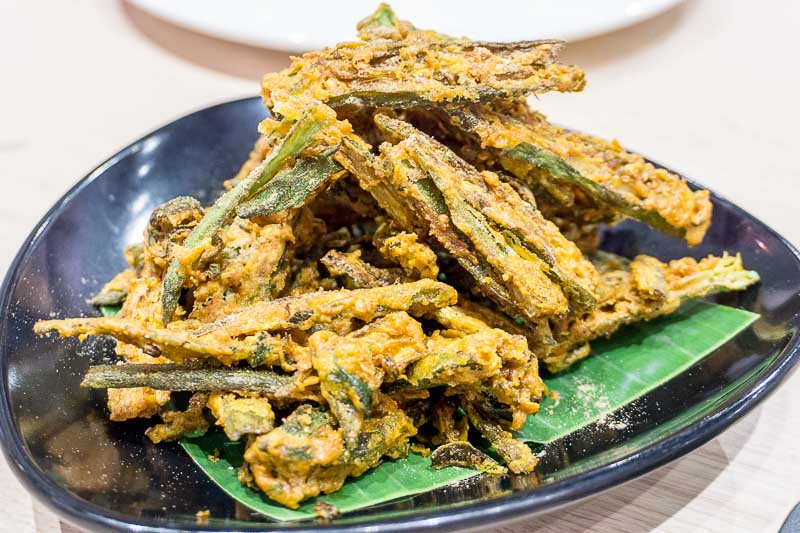 I’m normally not a fan of okra—in fact, I really dislike it—but their Kurkure Bhindi (S$5) was nothing like I’d anticipated lady’s fingers to taste like. It was crisp and delicately seasoned without being oily. I kept reaching for it as I continued to enjoy the other mains. 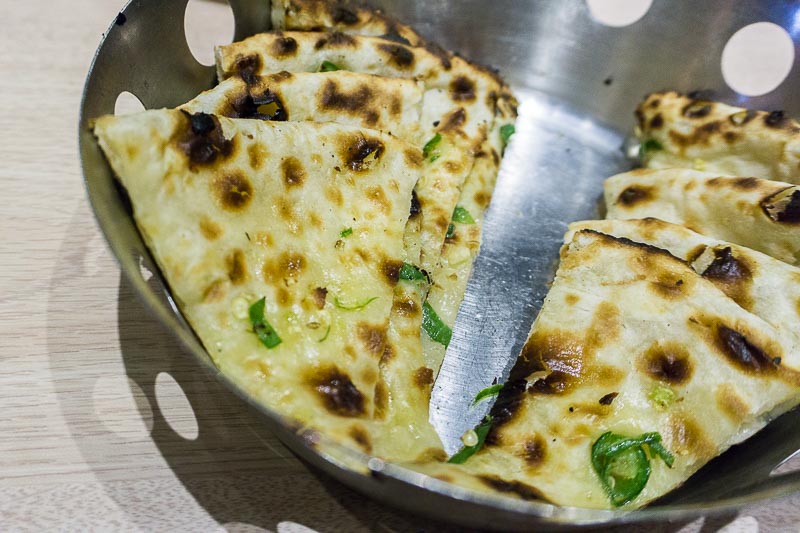 The first naan made its arrival. The Chilli Cheese Naan (S$6.50) was a spicy number, leaving a lasting tingling sensation on my tongue. I wish there was more cheese though; I reckon it would’ve balanced out the heat.

But then again, what is Indian fare without a bit of sweat? 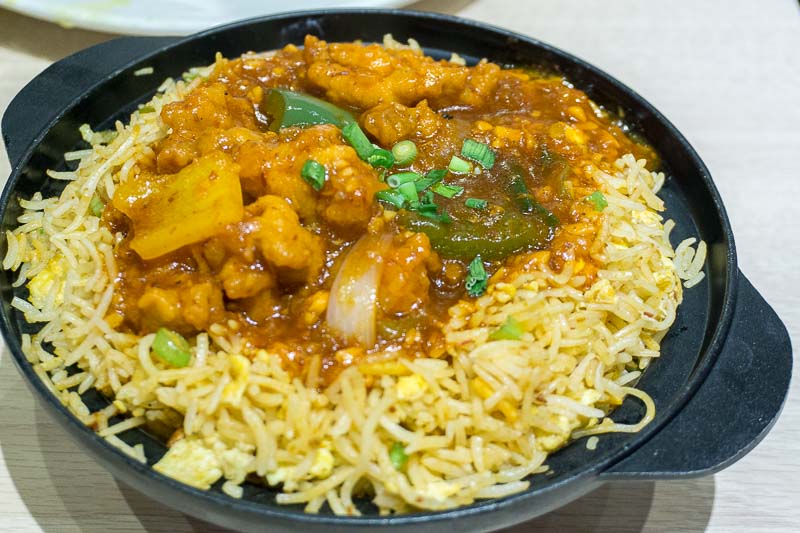 Now the Triple Szechwan Rice (S$15) (yes, it’s spelt that way) is an interesting dish. Apparently, it’s popular and common street food in Bombay and has both rice and noodles, as well as generous chunks of chicken. 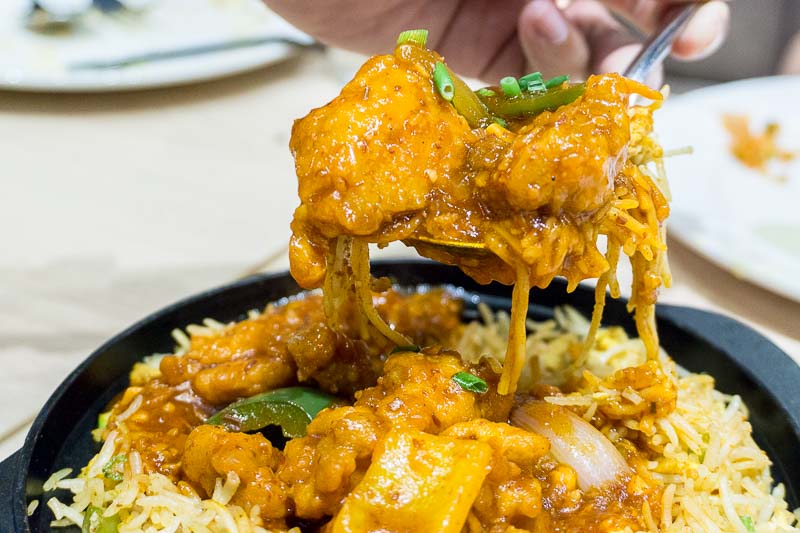 I couldn’t really grasp the novelty of this and felt like it was too mushy to enjoy. There was mild heat in the sauce but after a few spoonfuls of rice, noodles and chicken, everything tasted very one-dimensional. 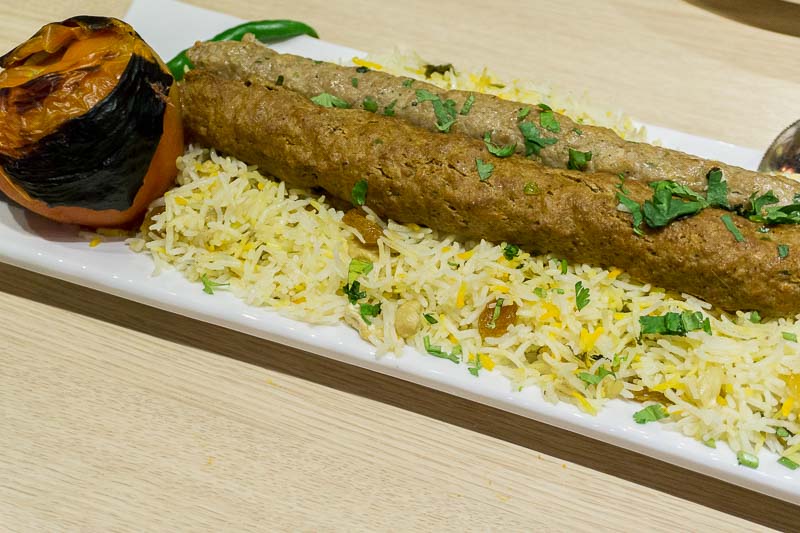 The Sultani Seekh Rice Platter (S$29) is great for sharing and comes with lamb and chicken kebabs, on a bed of basmati rice. If it seems familiar, it’s because it’s something commonly seen in Middle Eastern restaurants (which also made me wonder what it was doing in this North Indian establishment’s menu). 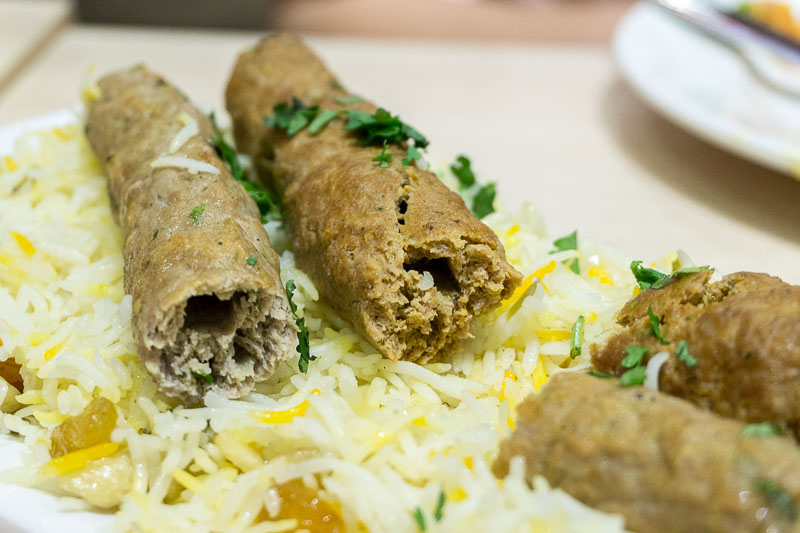 I broke those kebabs apart to reveal what looked like rather dry minced meat. Between the two, the chicken was underwhelming, while the lamb fared better in terms of taste as well as texture.

I couldn’t put my finger on what exactly was off about the chicken kebab, but I do know that for those who aren’t averse to lamb’s gamey flavour, you’ll want to focus your dining energy on the lamb instead. 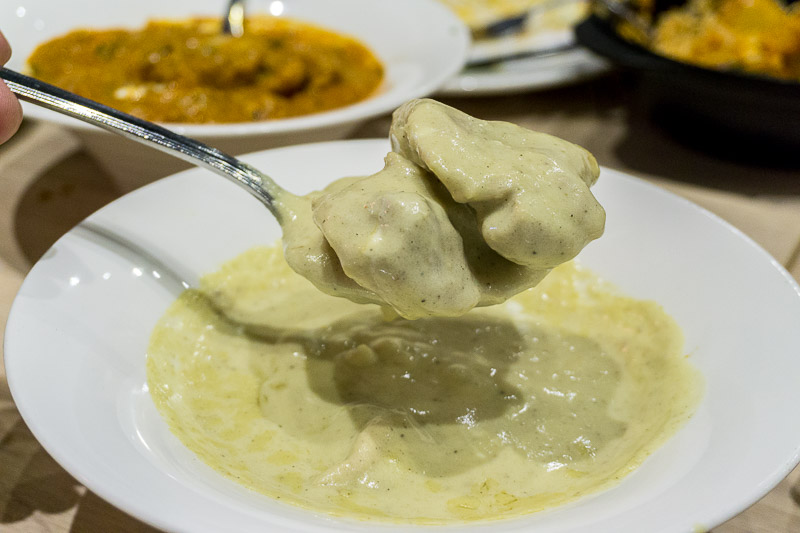 Any time I go for North Indian food, I gravitate towards a nice hefty portion of butter chicken. The Lucknow Murg Korma (S$16) is similar to that. It’s heavy-handed with its inclusion of cream, but I oddly wasn’t too fond of it.

The sauce was simply too overwhelming, and the chicken itself was nothing to write home about. There was a lack of balance in the entire dish; all I could think was ‘cream, creamy and creamier’. Respite came in the form of Masala Tea (S$4.20) and was served unsweetened. I typically don’t order sweet drinks, so this worked perfectly for me. The masala spices were peppery and did a dance at the back of my throat, while the milkiness really helped to calm my palate down after all the varied dishes. 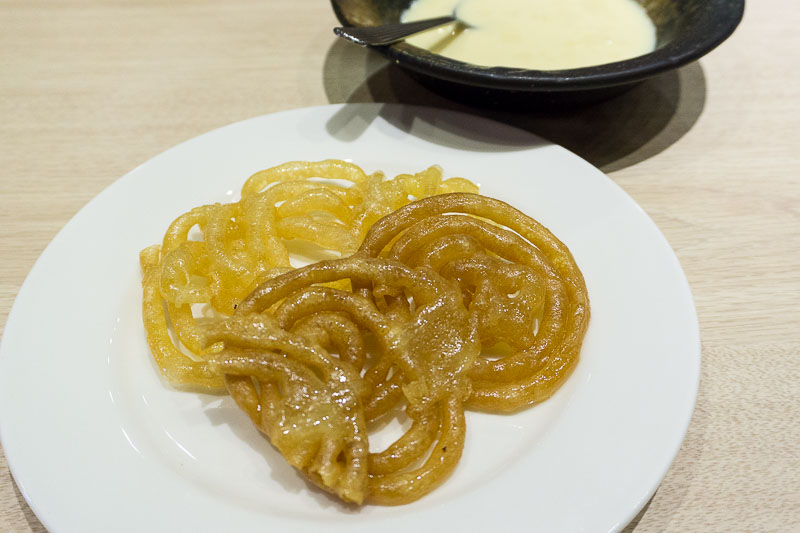 Indian sweets are known to be saccharine sweet, so I only had a nibble of Jalebi with Rabdi (S$8). It’s sticky, sweet and gives off pure candy vibes, so if you don’t possess a sweet tooth, stay far away from it.

I do like a dessert to round off my meals, but this proved to be too much and I barely touched any after a single nibble.

Come to Copper Chimney for the unusual—like the Triple Szechwan Rice and Kurkure Bhindi—but for classic North Indian cuisine, I reckon you already have your favourite spot which you should stick to. There were some inconsistencies but I have to default on a probable off night, but this place certainly keeps your taste buds on its toes.

But hey, don’t take my word for it—I could just be one of those people who stubbornly stick to what they love.

ChopeDeals: Save up to 45% at Copper Chimney >