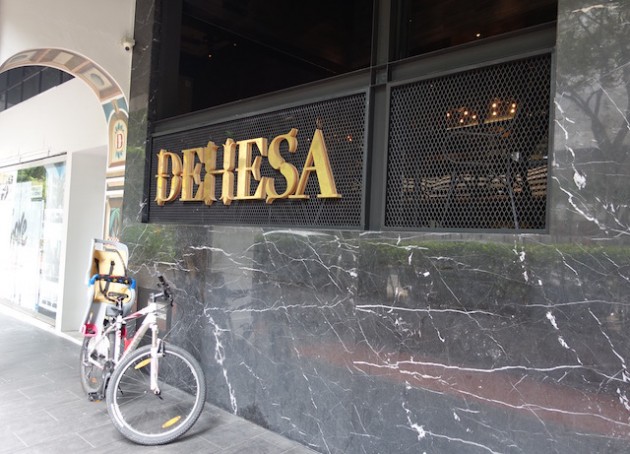 Dehesa, a whole-hog offal joint has opened its doors at the heart of Singapore’s Central Business District. The dishes served here are adopted from whole-animal-usage, consisting offal, alternative cuts as well as the classic cuts of the commonly eaten parts of the pig. Chef-owner Jean-Philippe Patruno, affectionately known as JP, conjures his dishes according to his taste and preference out of his love for alternative cuts and offal. JP had developed his passion for offal dining when he was appointed Head Chef of Quo Vaidis Restaurant in London, and was also executive chef at UNA.

Each of the dishes served are a portrayal of his creative and personalised cooking ideas.

Dehesa embraces an elegant, exquisite style of dining. The main dining hall has a layout of a lounge, with high tables and chairs surrounding an open-concept kitchen, of which diners can catch Chef JP’s culinary skills put into action. 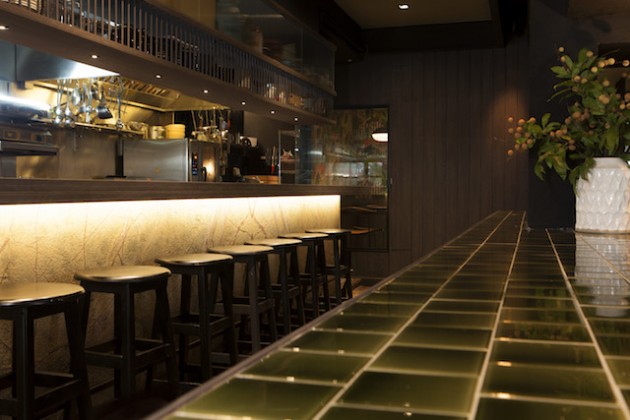 Chef JP cutting up some meaty delights utilizing the entire hog, which we will be sampling firsthand. Sliced and nicely displayed on a wooden chopping board as the presentation of the dish, this is one of the main highlights of Dehesa. This cold cut platter is made up of a variety of the different parts of the hog, including ears!

The lardo has a smooth texture and gives a slimy touch to the palate. Taste was just amazing, delightful and not overly salty. The pig’s ear was served in generous juicy slices while the scratchings were fried not too oily, giving a dry crisp that was indeed tasty.

The entire platter is made up of contrasting tastes, textures and flavours interwoven together and brings out the essence of offal dining. This dish is a perfect example from Dehesa on how to better appreciate the entire pig’s head, presented as an ingenious dish without any parts going to waste. 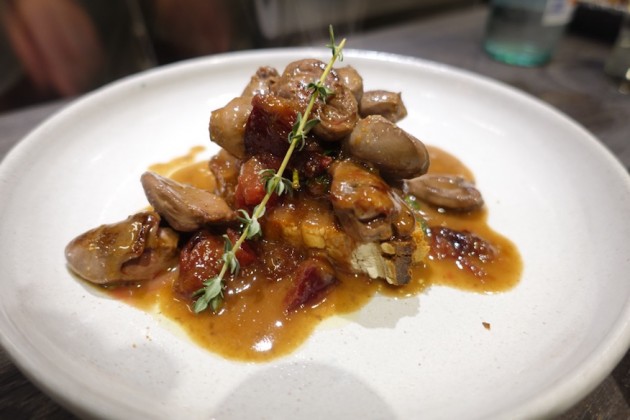 It is pleasing to know that the restaurant does not only fixate on only one particular animal for its offal dining menu. Small and dainty, the generous servings of the pieces of duck’s heart are a good combination with the sweetly flavoured toast.

The duck hearts give a bouncy, rebounding chew which shows a good degree of cook. 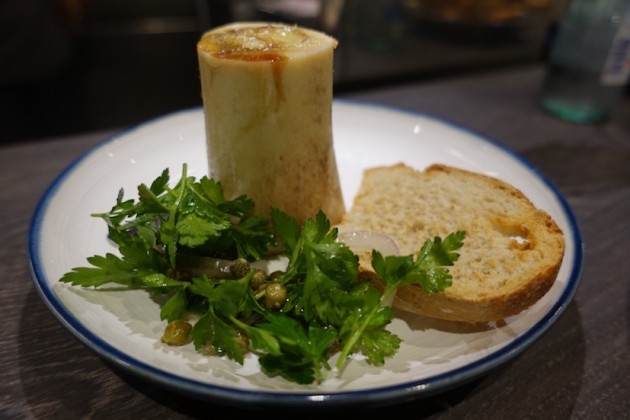 The bone marrow was contained and served straight from the large piece of bone. Accompanied with parsley, capers and a slice of French toast, the entire dish portrays simplicity.

The marrow is of a mushy but light texture. Not much of in terms of flavoured taste, but somehow gives a mellow, ripened umami feel to the palate along with the gelatinous texture. 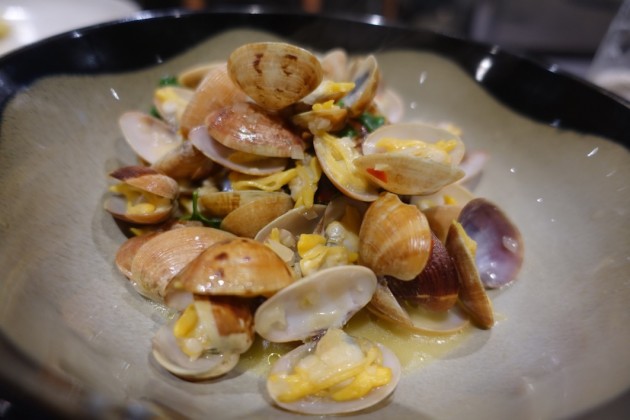 The la la (clams) here were served cold, tasted clean and wasn’t sandy at all. The meat was firm and had a not overly cooked – a cold and refreshing dish. 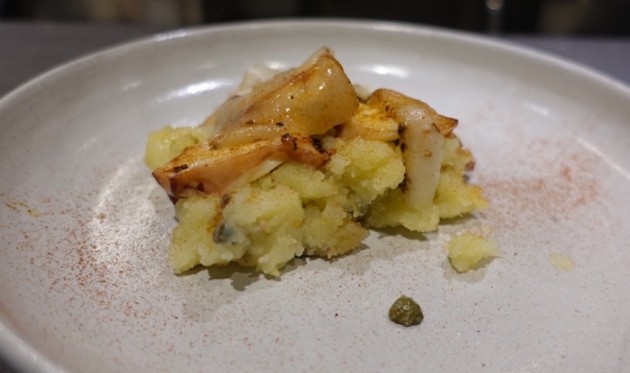 My favourite dish for the day, this was made up of a huge piece of Octopus tentacle along with strips of lardo, both topping mashed ratte potato.

Upon the first bite, the Octopus meat was thick and succulent;  it’s fresh quality was really impressive even amongst other stellar seafood dining places. The mashed ratte potato was of a supple texture, and crumbles in a pleasant manner upon biting. Structure was evident and wasn’t too dry either.

Paired with the strips of lardo, the entire dish was of a fitting combination of both taste and texture. The complementing textures of the octopus and the ratte brings out the richness of the octopus meat. 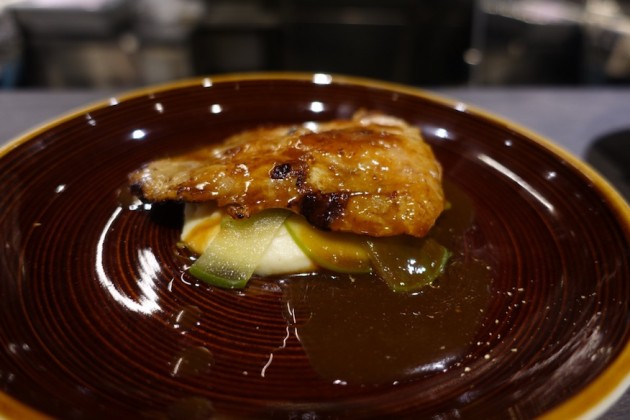 Referred to as the “secret” part of the pig, the jowl points to the area behind the shoulder and just below the back fat of the Iberico pig.

It is a secret treasure indeed, as this part of the pig is both tender and oily, but not flabby. A perfect texture.

Chef JP explains that he serves his grilled Iberico Jowl with apple as its base, as he doesn’t wish to combine a fatty taste with super equally heavy. Apple provides that light tartness to really compliment this cut. 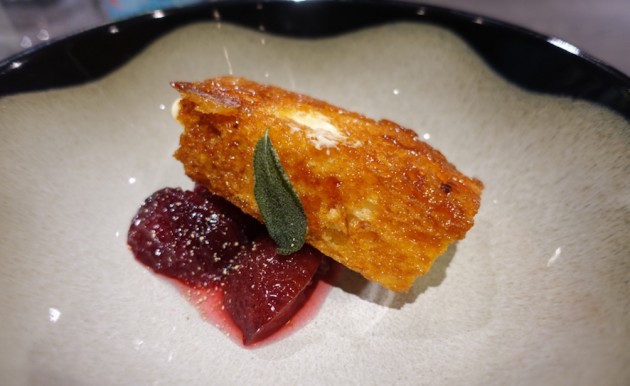 Chef JP shared that in order to defy the norm, he chose a broiche instead of French toast for his Spanish-style Torijas. The brioche was made up of a layer of crisp with Creme Fraiche as its filling. When bitten into, the cream oozes smoothly out of the layers of crisps. The plums give the lightly flavoured bread pudding an enhancement of sweet flavour.

No need to be a hardcore lover of offal and alternative meat dining, but do come by to Dehesa and experience a whole new culinary scene unique in Singapore. The flavours at Dehesa are distinctively more western and different from the usual Chinese style pork offals, which might occasionally be rougher to the palate.