Vegan ice cream? What sorcery is this!

There is already the unbeatable Llao Llao, long-standing contenders like Yoguru and Sogurt, coupled with countless ice cream stores in Singapore which I can simply come up with a list of. But here, tucked away in a corner of Yishun MRT interchange, lies Dofu. So ulu until I want to cry foul at their choice of location.

Yet, that has not deterred me from making two trips down within the same week, just for the ice cream.

Dofu, which sounds like a Dou-fu (Chinese for ‘beancurd’) stall sells no beancurd but is actually promoting a health-conscious lifestyle with their homemade Black Soy Ice Cream.

Having been opened for two months, Dofu is rather underrated in the food scene. Even not much online information is provided about Dofu, which I suppose they are still in the phase of sorting that out.

But good food will drive traffic. I kid you not and after having their black soy ice cream, you will know why. So, exactly what is so special about the ice cream from Dofu? Armed full of questions, I had a online chat with the owner of Dofu, June Lee, to get insider scoops on this!

Me: How does the concept of Dofu develop?

June:  We wanted something healthy yet appealing to the masses. It will be a selling point if people enjoy what they are eating and at a convenient level for them. That means having a light snack like Dofu’s ice cream whenever they can, be it after meals or after school time.

Me: Are you a vegetarian, hence the come-about of Dofu?

June: No. It is the belief in providing the best for the people and the support we received, especially from the vegan community, along the way that keeps us moving forward.

Me: Why in Yishun Interchange, so ulu and far from town area?

June: Simply if we can make it here, we can make it anywhere. Also, SMRT likes our idea and we are able to replace the previous tenant who is leaving. Me: What is Dofu?

June: Dofu is a premium black soy ice cream with a layer of chilled soy pudding forming the base of the cup served. Want something sweeter or to add flavours to your ice cream, we have customised versions of the parfait or just get the base and you choose your desired toppings.

Both soy puddings and ice cream are churned on the spot in the store.

Me: Who are the brainchild behind Dofu?

June: Dofu is jointly owned by June Lee, a real estate salesperson and Derrick Kuek who is a former Chief Operating Officer of an F&B company.

Me: Any meaning behind the name Dofu?

June: The Dofu logo is a combination of Japanese characters. とうふ means soya while どうmeans “tao” as in “the way”.

Together, Dofu will be a easily recognisable, remembered and pronounced name. Me: How healthy is Dofu’s ice cream?

You get a less sweet version and natural healthy fats like alpha-linolenic acid (a form of omega-3 fatty acid) that is good for the heart.

The greyish colour of the ice cream comes from the bamboo charcoal, known to improve metabolism and blood circulation.

There is also no gelatin in the soy pudding nor milk in the ice cream, which makes it perfect for vegans and vegetarians as well.

Me: The soybeans used are black?

June: Black is the new green! Black soybeans are known to be more nutritious than the normal soybeans. They function as a antioxidant and also reduce the risk of thrombise (a fatal blood clotting).

Me: Any future plans?

June: We intend to have a ice cream-only options for customers who prefer to  savour the ice cream just by itself. Expansion-wise, we are looking at East and West regions where fans of Dofu are voicing out for. Finally, Singapore is seeing a ice cream shop selling HEALTHY desserts, without the over-the-top candies and chocolates stuck onto it as toppings.

At Dofu, you can indulge without guilt, eat without being judged and probably get slimmer without exercise.

As for the pricing, the ice creams are affordably tagged and come in three sizes:

Cant decide? Don’t worry as they have in-house creations at a flat rate of $5.60. There are a variety of ingredients to choose from. Mix and match according to what you like with offerings such as kiwi, mango, low-fat granola and yogurt jellies, with choices from a myriad of sauces available. 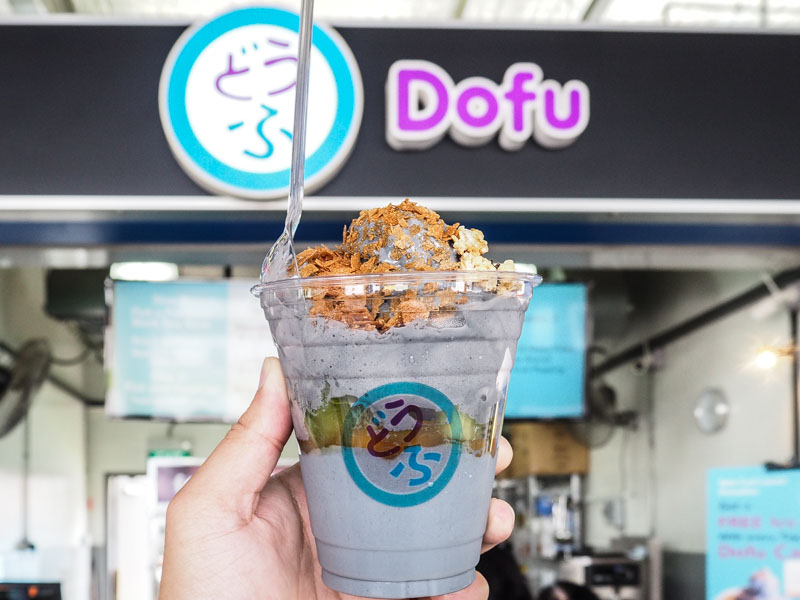 At the base is a layer of black soy pudding followed by a swirl of the ice cream. Then I get to choose three toppings which will then be topped up with another layer of ice cream. Lastly, I select another two FREE toppings to add an extra crunch to it.

Ta-dah! My healthy ice cream has become a instagram-worthy and healthy dessert.

The texture of the ice cream is creamy, smooth and almost Tofu-liked. Think panna cotta, but with a cooling and not-so-sweet consistency. Currently, Dofu has also rolled out a loyalty discount card:

The discounts are in the form of bonus dollars added accordingly to how much you top up the Dofu cards.

Subsequent top up values are:

Dofu has a lot of potential and there has been plans from the owners to go further. I would definitely love to see our local startup, Dofu, develops herself well, especially when the co-owners clearly has a direction of where she is heading to.