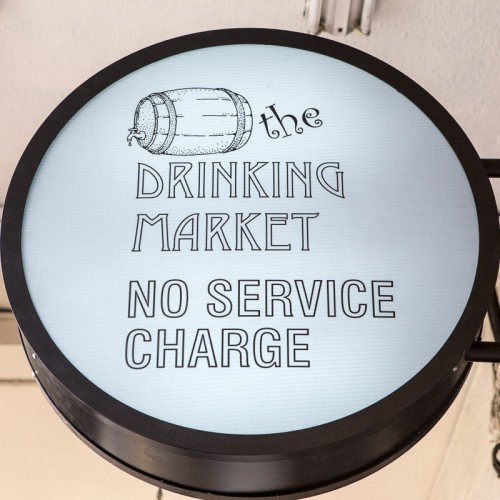 ‘It nearly could have been ours,’ says The Drinking Market Director Joel Low of a felicitous opening along the East Coast beach that never was realized for his Northern-Thailand-inspired bar. But bustling Katong, where the 2-month old gastropub currently is housed, seems to be pretty suitable for the targeted crowd as well.

Regulars at the no-frills The Drinking Market are encouraged to furnish the bar with ornaments that raises its homely appeal, which explains the enormous Sleeping Buddha oil painting that hangs near the kitchen. Ultimately, as Low shares, the bar’s philosophy is to provide good food and beer absent extravagant pricing, so perhaps he insinuates that your artistic contribution might someday win you a couple of beers. 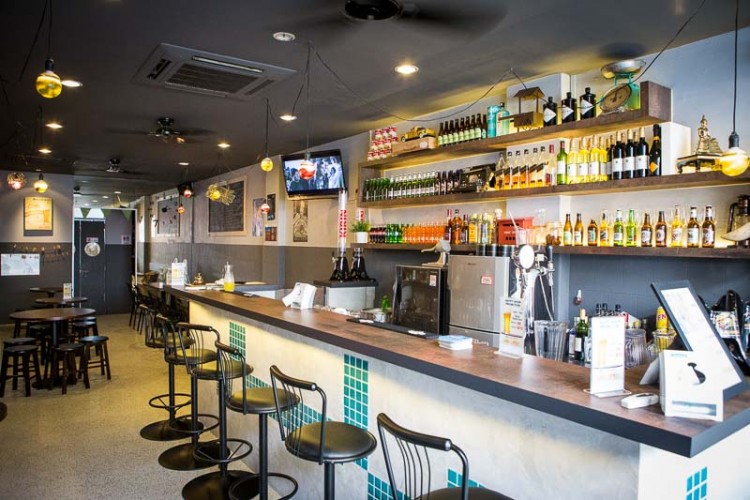 On a stormy Tuesday afternoon, three fine gentlemen sauntered into The Drinking Market to sample its bestsellers and range of alcohol including ciders and the sole Kirin on tap. 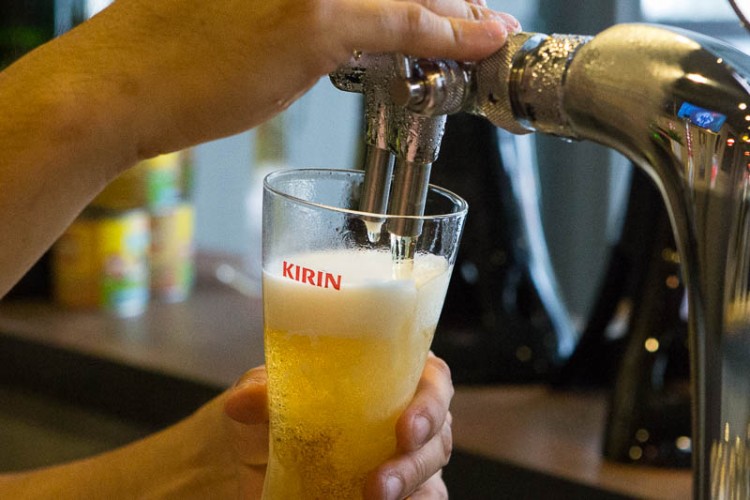 The dual-valve tap used to dispense the Kirin ($10 nett a pint at happy hour) is intriguing. With this swanky device, the layer of foam is apparently more tightly composed of small bubbles to prevent your beer from getting flat so quickly, although Kirin itself isn’t as gasey a beer. The beer head produced is very creamy too, adding another dimension to the beer. 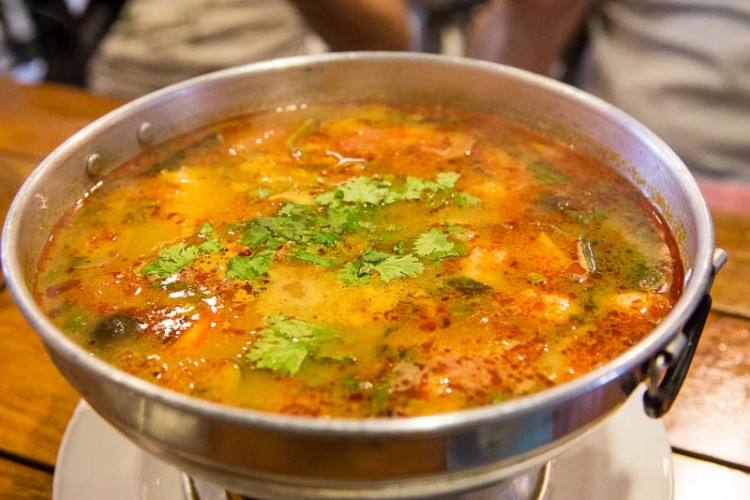 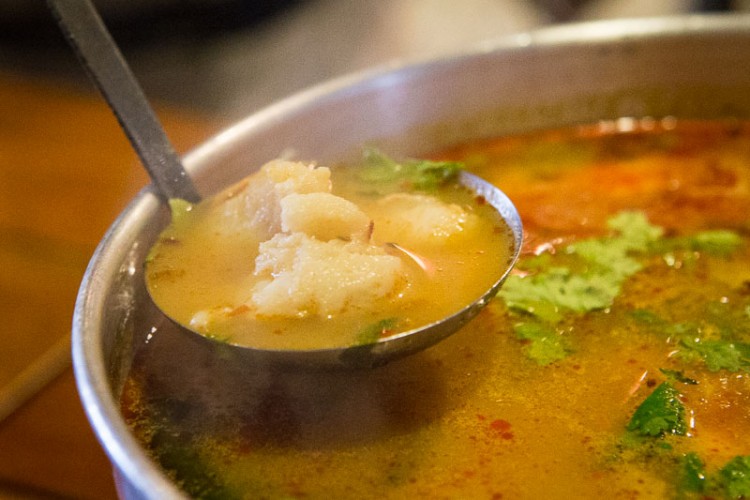 Tom Yam Red Seafood Soup ($10 | $15). It is heartening to have some hot soup in the rain, though the spicy soups might not necessarily sit well with beer. This red version though, is not as spicy as the usual variety, and is well-received by many foreigners. The clear version of this is available too, but I am admittedly a bigger fan of the more milky red, where the seafood flavour more brightly shines with more spice as well. 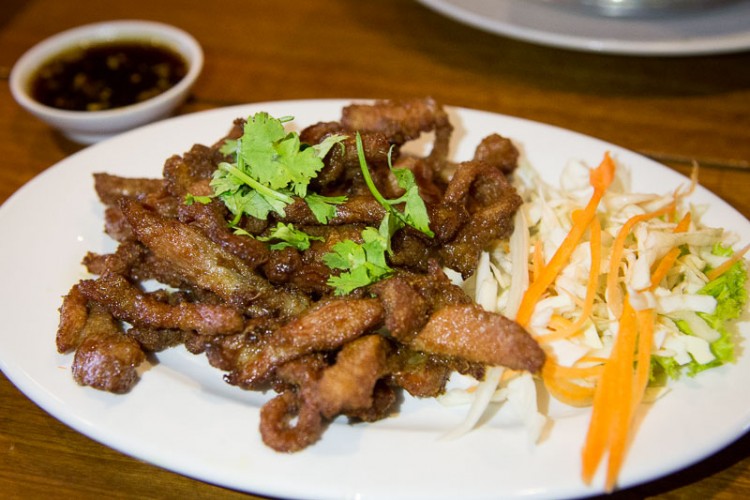 Moo Yang ($10). I like to think of this as a Thai calamari. Instead of squid, tendinous pork collar is deep fried, a local twist from the more common, authentically grilled dish. There is a fair consistency among the pieces that renders it a tasty bar snack, and goes perfectly with beer. 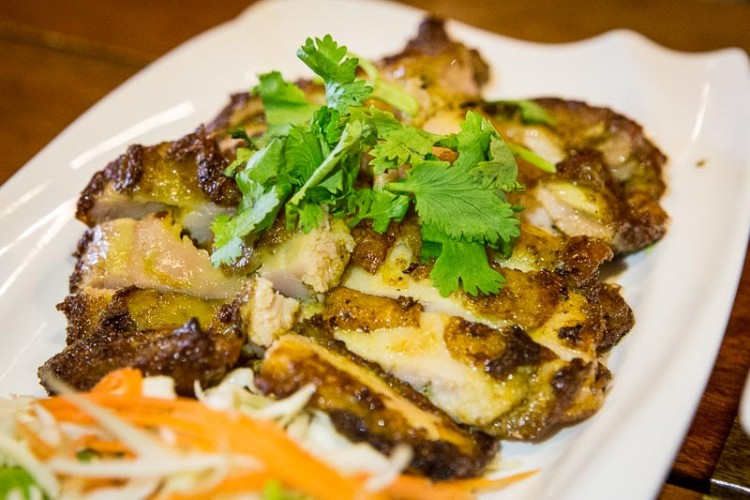 Gai Yang ($8). More filling and juicier than the pork collar is this grilled and spiced chicken that is bite-size and still sufficiently lined with tender skin. Goong Chae Nam Pla ($10). This turned out to be our unanimous favourite (apparently, most regulars share the same sentiment). Raw prawn salad, as it is called, is potently dressed with an insidious chili paste on the verge of unbearable spiciness, but delectably falls slightly short of that with the paired crunchy bitter gourd and cold shrimp. The heat burns slowly, really hitting only after a few moments, yet afterwards you are craving for another hit like a crack addict. 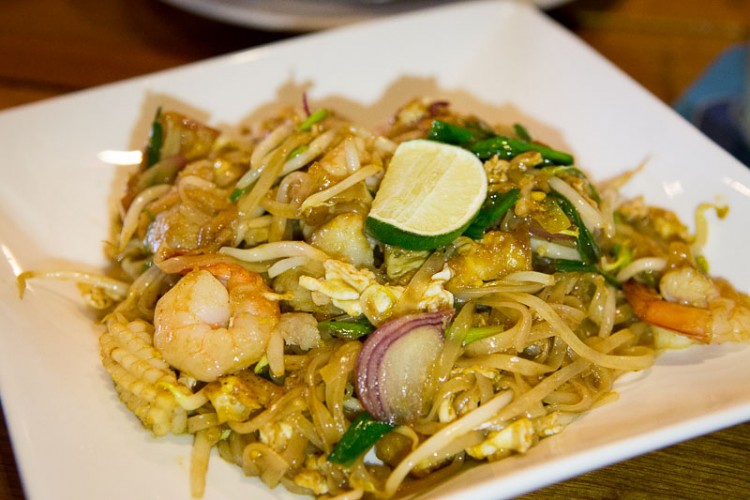 Phat Thai Talay ($6.50). For its price, this wet and multifarious dish that could feed one-half mouths is as good as any, what with the abundance of quintessential ingredients of seafood, crunchy beansprouts, spring onions, and egg. If you’re into soup, there is also the adventurous option of going Kway Teo Soup Tom Yam. Thai Fried Rice ($6). Copious use of salt, chilli, and oil is reminiscent of the Thai savoury standard to which The Drinking Market’s fried rice brilliantly adheres. An appetizing brown overtone and good portion will satisfy fans of the kind of oily fried rice that intensely strikes the buds. 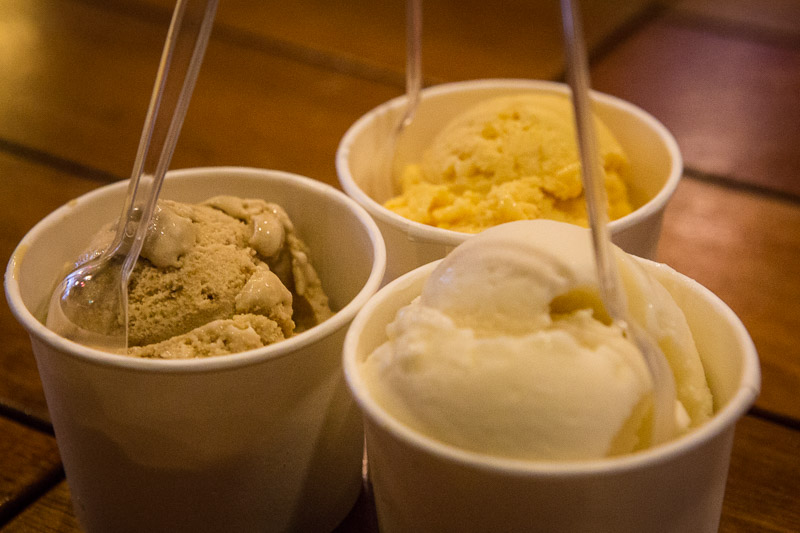 Ice-Cream Scoops ($3.50). Mango Lassi, Coffee, and Lychee Lime were the flavours chosen from the ice-cream stands that is placed right outside the restaurant. There was certainly merit in each of them, but my favourite is the white Lychee Lime that looks and feels almost like lemon sherbet. The ice-cream is homemade specially for The Drinking Market, with tart flavours to ease the heavy spices of the Thai dishes. A small selection of craft beers and ciders are also available other than the Kirin on tap. Happy hour that ranges the entire afternoon (1 – 7pm) is sure to be enticing if you were looking for a change from the usual bar food for fairly cheap. With sufficient liquid celebration while invigorating music pumps, it is easy to catch yourself sometimes having to repeatedly remember that you aren’t actually chilling at a Koh Phangan beach resort.

There’s also a couple of seats outdoor where you can have a beer and chill at while overlooking the buzz of East Coast/ Katong. A truly lazy afternoon with beer is always welcome.