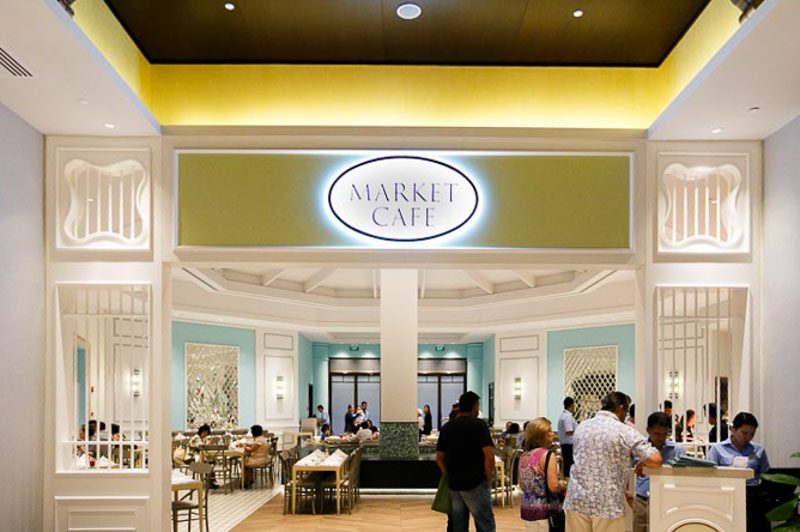 Every Chinese New Year, we go for lunches or dinners with our family and relatives and we sit through a traditional eight course meal. Most of the time, I find myself wishing I had a choice in deciding on what to eat.

If you’ve ever had that problem, Ellenborough Market Cafe at Swissotel Merchant Court is the solution. Instead of a fixed course meal, they’re introducing six Chinese New Year dishes and desserts into the existing buffet line from 16 January – 12 February 2017. 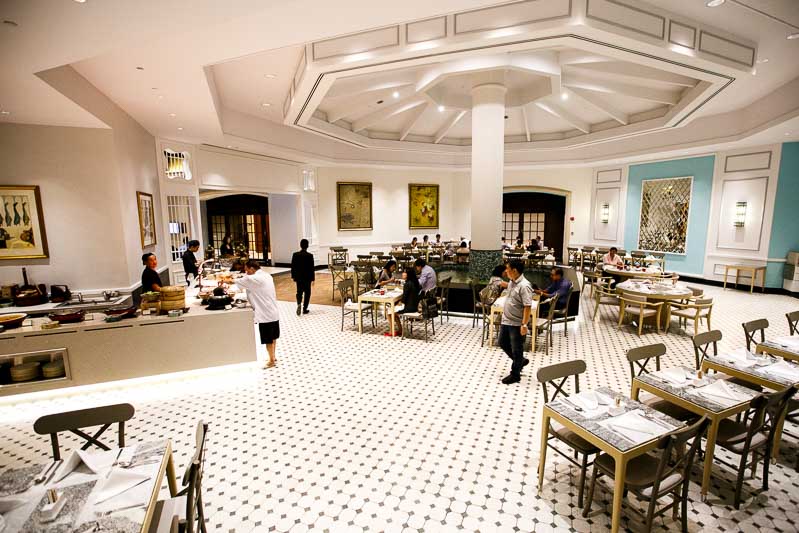 The restaurant was under renovation until July 2016 and reopened with modern white walls, accented by Peranakan paintings and wood paneling on parts of the ceiling.

This is a restaurant well known for the durian pengat dessert and the Peranakan food. Some of the specialties include the chilli crab and the must-try black bean slipper lobster. We started our evening off with a lo hei, and I felt like that was the dish that made the most lasting visual impression on me. The vegetables and nuts were placed to make the yu sheng resemble that of a rooster, in a nod to this being the year of that particular Chinese Zodiac.

The vegetables were nice and crunchy, with a generous serving of fresh and thick salmon slices – exactly what a good yu sheng should be. 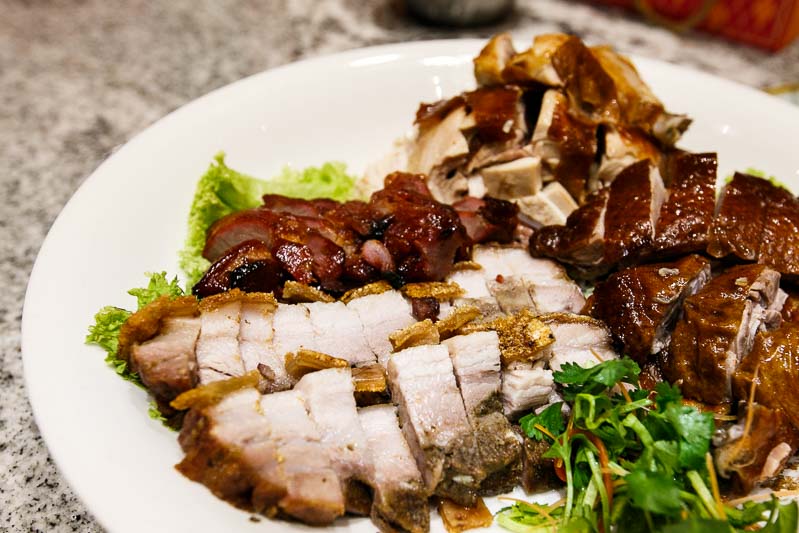 Another dish that really stood out to me was the mix of roast meats. The standard roast duck and crispy chicken were done nicely, with a slight pink to the duck meat and the chicken breast still moist and not tough.

The char siew was sweet and very reminiscent of the thick, less burnt slices that Hong Kong restaurants serve. I loved the roast pork; the skin had a very satisfying crunch and the meat was tender with only a thin layer of fat. My favourite part of Chinese New Year dinners is always the pen cai. I love how so many ingredients fit beautifully into one claypot, and I never give up an opportunity to take a photo for *ahem*, Instagram purposes.

The one Ellenborough Market Cafe is offering is no different. The claypot was packed with traditional ingredients, from baby abalone and sea cucumber, to Chinese mushrooms and long cabbage.

Usually, I skip the mushrooms because I don’t enjoy how overwhelming the taste can be, but I was satisfied with how the mushrooms here were nicely done. The scallops were a little firmer than I would have preferred, but the abalone was soft and tender in contrast. 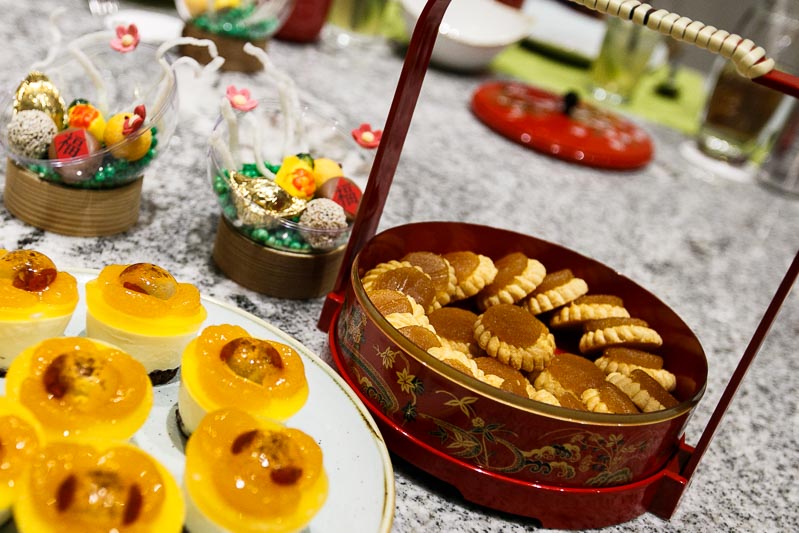 Finishing off the meal with desserts, we had traditional pineapple tarts, a mandarin cake and chocolate pralines. The pineapple tarts had a buttery crust that crumbled and melted in my mouth.

It took all of my willpower not to take more despite my complaints that I was beyond full at this point. The jam was fibrous and slightly more tangy than most commercially produced pineapple tarts out there, a result of how the pineapples are hand grated traditionally to produce the jam.

The cake consisted mostly of a light cream with mandarin slices and half a sphere of osmanthus wolfberry jelly adorning the top. The cream was airy without being too greasy, and the jelly was fragrant and slightly sweet in contrast with the sour mandarin slices. 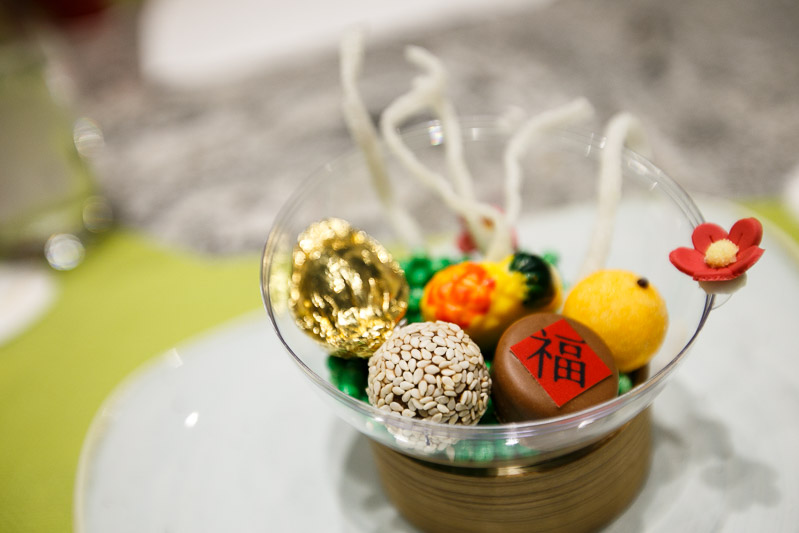 But the pralines were what caught my eye, or rather, ear. I was still busy with the delicious pineapple tarts when I heard, “Try the pineapple shaped one, it’s made with pineapple puree.”

I was a little disappointed because I expected more of the pineapple to shine through, but it certainly satisfied my sweet tooth, along with the orange praline that had a coating of orange flavoured sugar on its shell. 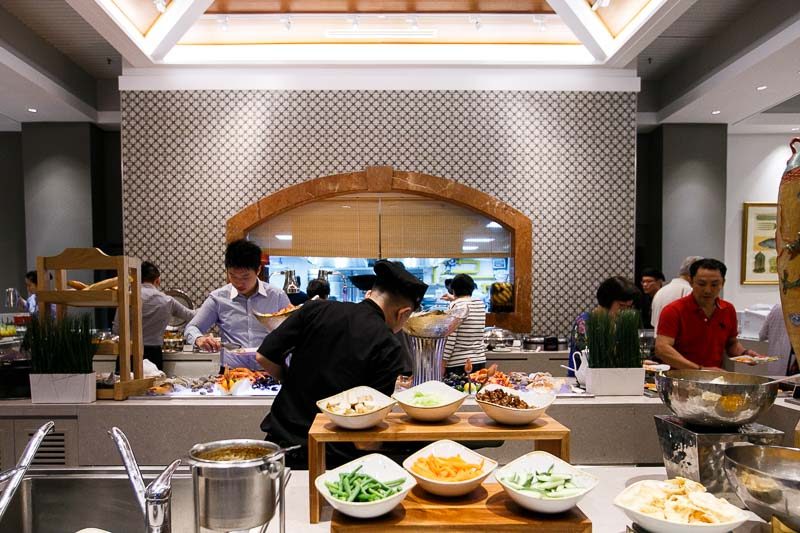 Since these dishes are going to be added on to Ellenborough Market Cafe’s existing buffet line, it’s pretty value for money. The lunch and dinner CNY buffets ($62++ and $78++ respectively) are only slightly more expensive than the regular prices.

So if you want to enjoy Peranakan food alongside your Chinese New Year lunch or dinner this year, you know where to go. Kipposhi: Have A Bowl Of Blue Ramen In Tokyo To Chase...