Inspiring Heroes: Innovative App Lets You Donate A Meal Every Time You Check In At A Restaurant With TangoTab & The Food Bank Singapore

Have you “checked in” to a location on a social media app before?

Well, I have. I’ve used FourSquare (which is still alive, by the way), Facebook, Instagram and Twitter to update my location multiple times, but TangoTab is the first to include a social element into it.

Every time you check into a restaurant on TangoTab, you donate a meal to somebody in need. How cool is that? 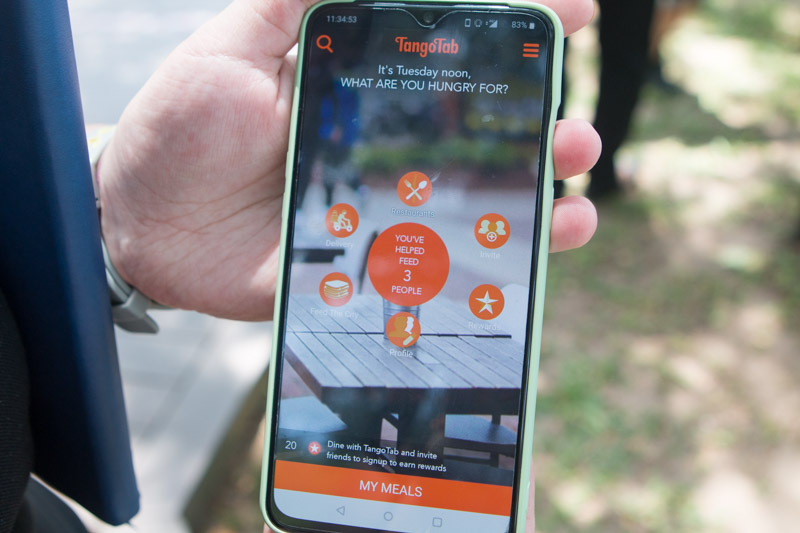 If you want to know how it really works, well, that’s where it gets a little confusing.

Diners can download the app for free—in fact, if you just download the app, you’ll have donated two meals already! If the restaurant you’re dining at is listed on TangoTab, you can open the app and “check in”.

Once they do so, TangoTab will donate a token sum to The Food Bank Singapore, a Singapore charity that collects surplus food and gives it to organisations and individuals that need it. 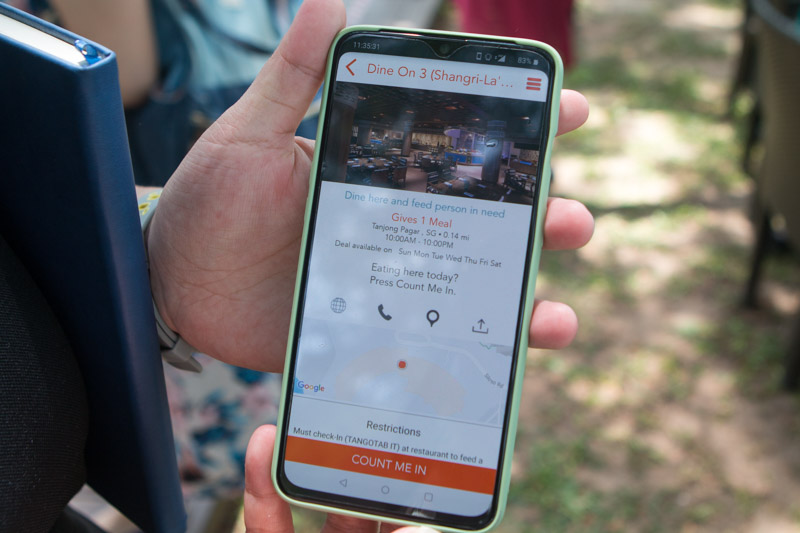 TangoTab is actually a US-based app, but power siblings Nichol and Nicholas Ng decided to bring it into Singapore in April 2019. In just six short months, TangoTab has roped in over 350 F&B establishments to be listed on its app.

When I scrolled through my app, I found popular restaurants that I’d visit personally—Boost, Din Tai Fung, Creamier, Kajiken, Joe & Dough, and many more.

It certainly is a meaningful initiative, considering I’d have dined at any of these restaurants disregarding whether I knew about TangoTab or not. To know that my one act of dining out could have helped someone in need really warmed my heart.

Nichol and Nicholas don many hats. Other than bringing TangoTab to Singapore, the two of them also started The Food Bank Singapore in 2012. FYI, their family also runs a food distribution service and they also own a frozen yoghurt company in Singapore. Talk about multi-tasking!

“Singapore is the world’s most food-secure nation—that means we have the biggest access to food. It’s amazing because we only grow 8% of everything we consume,” shares Nichol. “Yet, at the same time, we have people that cannot afford to feed themselves on a regular basis and there’s also food that’s being thrown away. We just wanted to level that equation.” They coined the week-long event Feed The City Week. “It’s a major ‘bring the people out to jalan jalan, makan makan‘ kind of thing,” said Nichol with a laugh.

Curious, I decided to drop by one of the events to see how it played out. That day, they invited 80 kids from Yishun Student Care to Shangri-La Rasa Sentosa Resort & Spa for a fun-filled day of games and food. 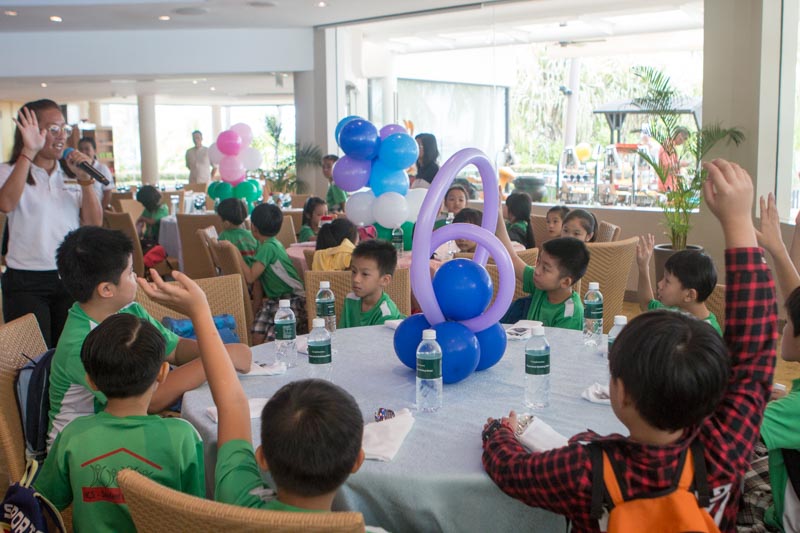 The instant I stepped into Shangri-La’s Rasa Sentosa Resort & Spa’s function room, the sound of 80 laughing children filled my ears.

There were so many things happening at once. Children were talking excitedly amongst themselves, some of them exclaiming that they spotted a bouncy castle in the shape of a pirate ship outside. The emcee from Shangri-La was interacting with each table, and the eager staff were waiting outside for the onslaught of hungry kids, and there I was—snapping pictures from a corner of the room. 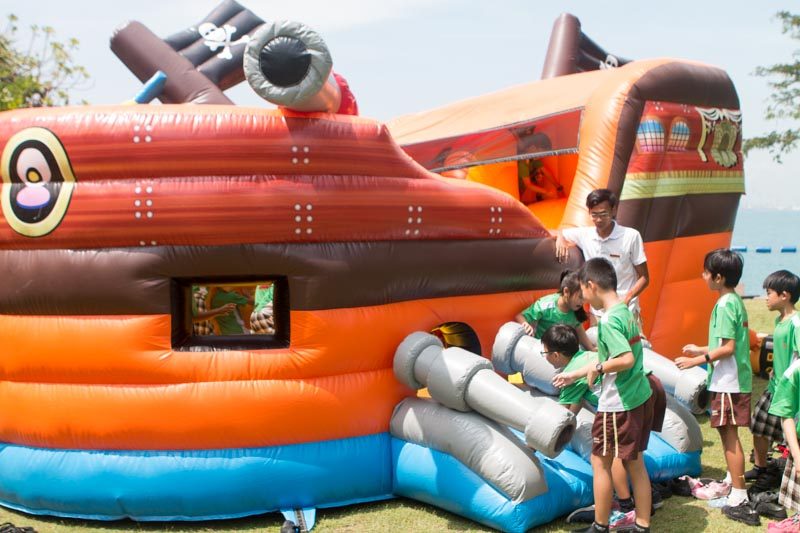 The programme for each day, created and executed by the team at Shangri-La’s Rasa Sentosa Resort & Spa, was tailored to each group of beneficiaries.

For the kids from Yishun Student Care, the team at Shangri-La brought in a bouncy castle, race cars, and bracelet-making and sand art stations. They filled the buffet line with chicken nuggets, candy floss, spaghetti bolognese, and more. 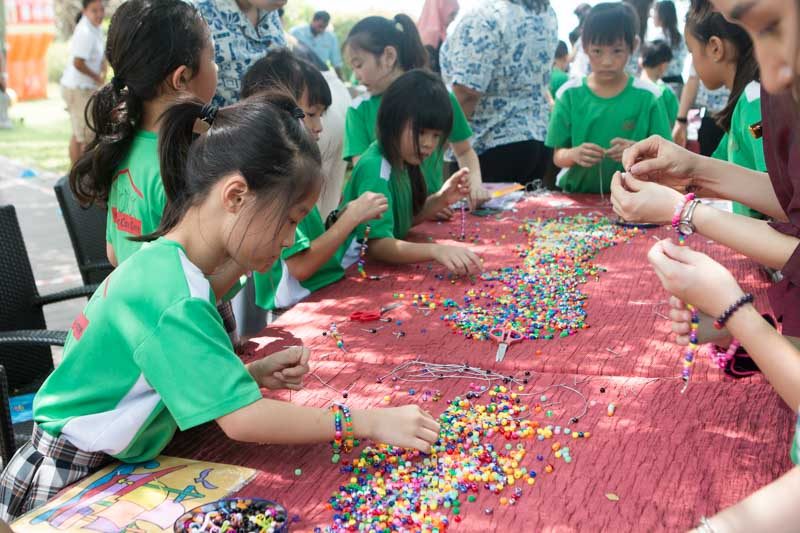 “We tend to take the ability to eat out for granted,” shared Nicholas. “I mean, as Singaporeans, we eat out on a regular basis, but it’s easy to forget that some people just can’t afford to.”

Nodding her head, Nichol chimed in. “Yesterday, we brought 80 old folks from FaithActs to Shangri-La Hotel’s The Line for lunch. The social workers were telling me that one particular auntie took three whole days to get ready because she had to borrow make-up and clothes from other people,” she said. “They’re really so excited to be able to go out, even if it’s just for two or three hours.” 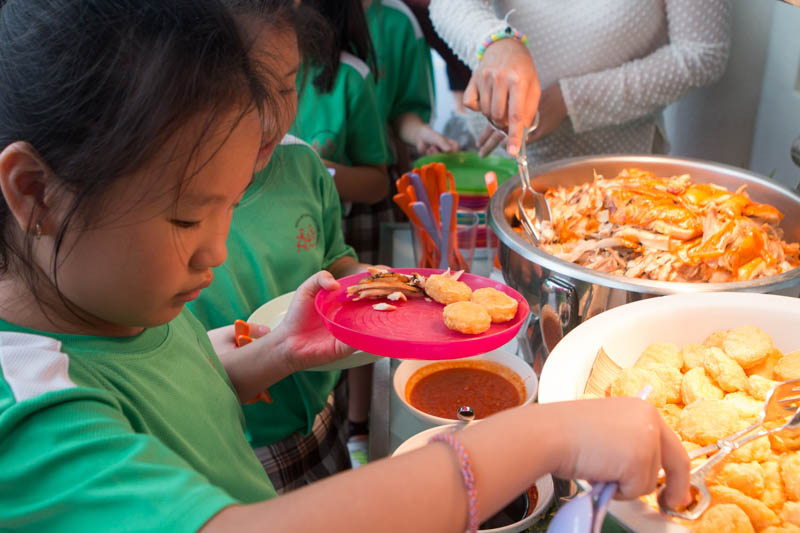 Hungry from an hour of non-stop playing, the kids eagerly dove into the buffet spread. Volunteers and hotel staff lined the way, helping the children take the food and dishing out the hot soup. 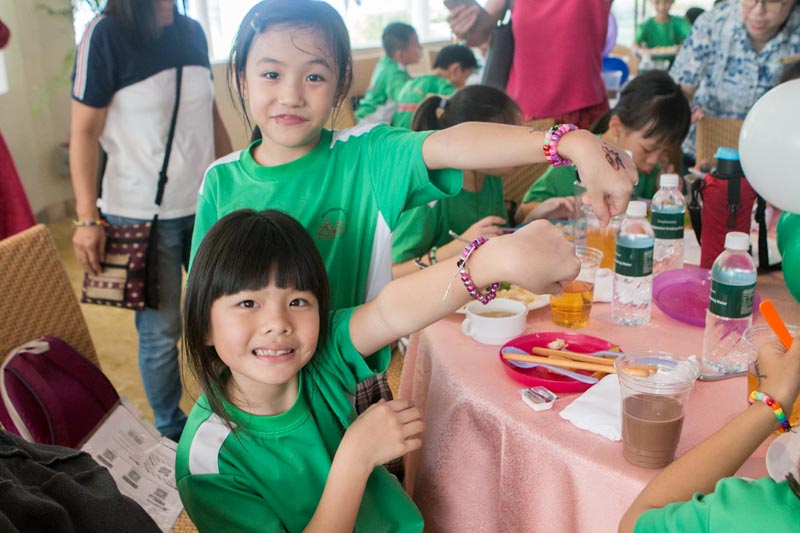 I got to admit, the staff at Shangri-La’s Rasa Sentosa Resort & Spa had planned this entire afternoon really well.

There were kid-friendly plates and utensils, balloons on every table, water for all the kids, and even mementos for them to take home to show their family. Children I never met before were coming up to tell me they had made bracelets and necklaces for their best friends, mothers or grandmothers! 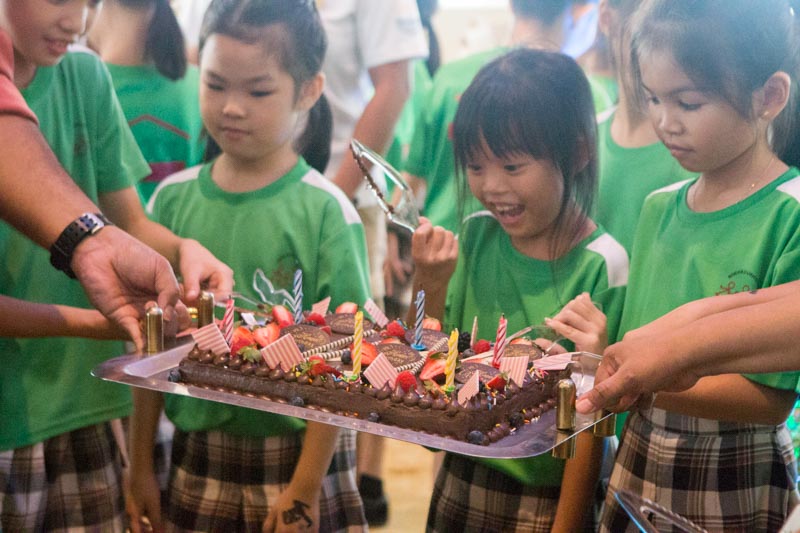 Not only did the Shangri-La staff make sure that all the kids had eaten proper food before opening up the dessert stations—practically everyone was queuing up for candy floss once that happened, they even brought out a surprise chocolate cake to celebrate a handful of birthday babies at the end of the event.

It’s one thing to be able to celebrate birthdays at home but it’s another to celebrate it on such a large scale. All the staff and volunteers put in so much effort to make sure that these kids from Yishun Student Care were happy and well-fed, and that they would remember this day for months to come. 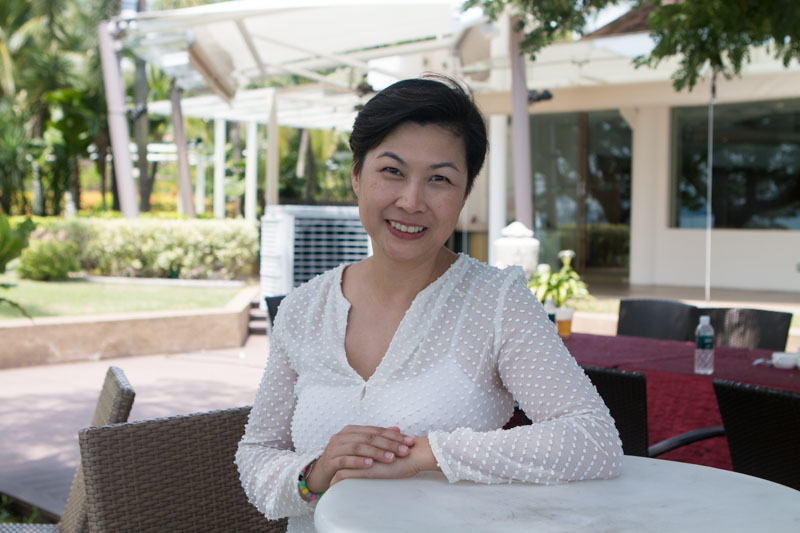 I sat down with Dora Tan, who is the Assistant Area Director of Shangri-La’s Corporate Communications, and asked her how the Feed The City Week has been.

“It’s been amazing,” she gushed. “We’re in a hospitality industry and through events like this, we’re able to extend what we do to people from the community and in a way, to touch lives. It’s very rewarding for us. Even amongst colleagues, it bonds us together when we do good together. It makes our work so much more meaningful.”

Plus, to continue giving back to the community, Shangri-La Group hopped onto TangoTab as well. In fact, it’s the first hotel to be listed on TangoTab!

“Instead of doing a one-off event, we wanted to actually extend what we’re doing beyond one day or one week. We wanted to extend the narrative and close the loop,” said Dora. “Hence we work with TangoTab because every time a diner checks in at one of our participating restaurants, TangoTab will donate funds to feed someone through The Food Bank.” As the day came to a close, all 80 children got to bring home a large food bundle filled with groceries, including bread, snacks, milo tins, and more.

It hit me then that what TangoTab, The Food Bank Singapore, and Shangri-La Group were doing was truly so meaningful. These are children, old folk, and low-income families who struggle to make ends meet, let alone dine at lavish spots such as this.

Plus, they didn’t just feed these beneficiaries. All of them ensured that they had a good time out—just like all of us would on a regular night out at your favourite restaurant or bar—and gave them food bundles so they would be able to fill their bellies for the next couple weeks.

If you’re reading this, I encourage you to download TangoTab, and the next time you’re dining out, check the app to see if the restaurant or cafe you’re at is listed or not. It literally costs you nothing except phone space (and data if you’re not on WiFi), but it would help so many people in the long run.

“We have to really remember that in Singapore, we’re so lucky. We don’t grow anything but we have access to everything that’s out there,” said Nichol. “I think while a lot of people like to complain that the standard of living in Singapore is very expensive, we need to take a step back to remember how lucky we are. A bowl of bak chor mee costs S$3, but that same amount of money can probably only get you a quarter of a bagel in Australia.

If there is any country that’s able to feed everybody, it’s Singapore.”