Aside from my morning 3-in-1 that I must have to start my day and an occasional cup of black coffee to keep me awake during noontime, I’ve never seen myself as a person who understood the world of caffeine. It was not till the start of this ‘Circuit Breaker’ period when I came across a YouTube channel that sparked my interest in this weirdly addictive compound.

Watching video after video of James Hoffman evaluating brewing methods and reviewing coffee equipment in his soothing story-telling voice, I found myself hooked on trying to re-create a perfectly brewed cup of cafe-style coffee.

Not only that, but I also became obsessed with looking for good coffee hacks that will take my morning cuppa up a notch. This was when I came across one of James Hoffman’s video titled ‘The Magic of Salt in Coffee’.

Some of us like our coffee black, some with a bit of sugar and others with a dash of milk. The video, however, delved into the idea of incorporating salt into coffee—an apparently long-standing practice that some people swear by to improve the taste of their coffee.

Not a new trend by any means as this has been a customary way to prepare coffee in countries like Northern Scandinavia and Turkey, this “new” coffee hack sparked the interest of many especially after Alton Brown, a celebrity cookbook author and TV personnel, introduced it on his show and on Facebook.

Known to some as the ‘Alton Brown coffee trick’, the celebrity suggested adding a quarter teaspoon of kosher salt to every six tablespoons of coffee grounds. His reason for doing so was that “not only does salt cut the bitterness of coffee, but it also smooths out the ‘stale’ taste of tank-stored water”.

The real question is, does it really work? Should we be adding salt instead of sugar and milk into a freshly brewed cup of coffee? With different schools of thought voiced online with regards to this topic, I knew I had to experiment for myself to decide if this hack really works. But before getting my hands dirty, let’s first understand the science behind this practice.

Coffee is in itself a bitter compound—not merely due to the presence of caffeine but also antioxidants that appear in roasted beans. Formed primarily when green coffee beans are roasted, more of such compounds are found in darker roasts resulting in increasing intensity of bitterness. 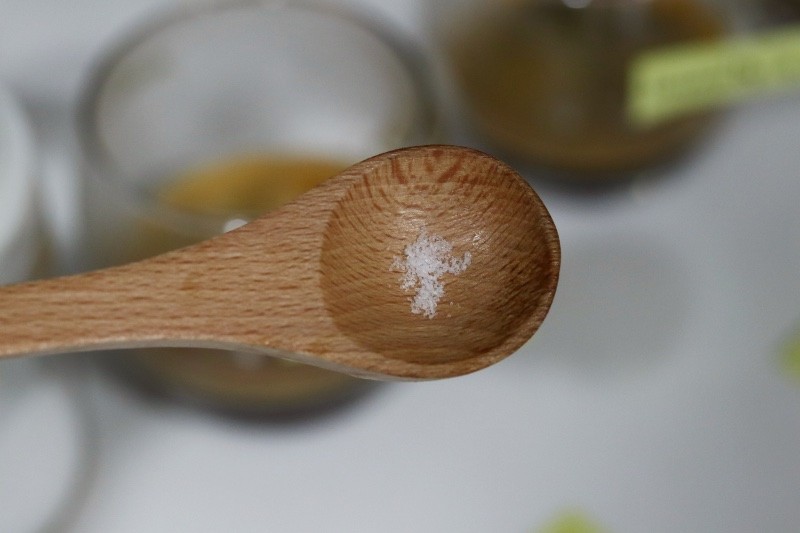 The introduction of salt—in particular, the sodium ion (Na+)—however, interferes with our transduction mechanism of the bitter taste. By adding salt into a dark roast of coffee, the sodium ion interacts with our tastebuds, causing our taste receptors to react to the saltiness instead of bitterness.

Since unpleasant bitter notes are being tempered down and neutralised, the beverage is thus perceived to be more palatable.

In addition to its ability to mask bitterness, salt is also a unique ingredient as it helps in amplifying flavours. By adding salt into your coffee, it enhances existing flavours such as sweetness and fruitiness which will usually go unnoticed to the uninitiated. 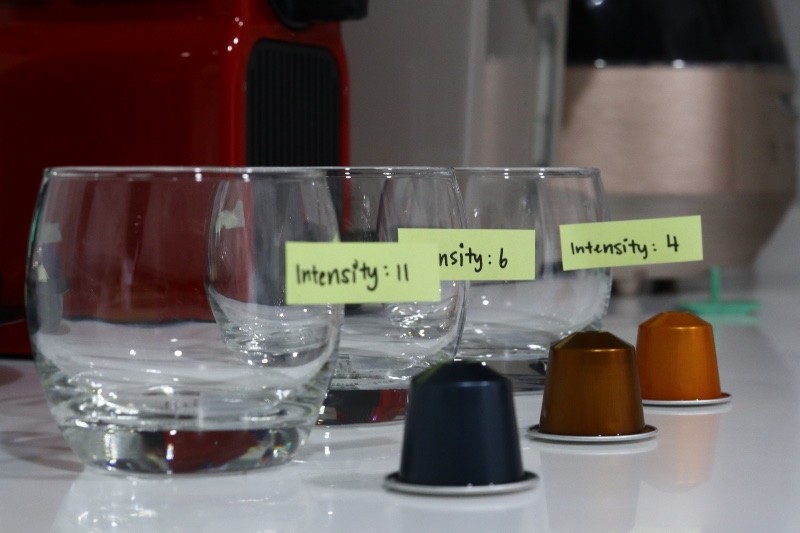 Uncertain about the scientific explanation, I decided to do a taste test to verify the wonders of salt. I wanted to find out the extent to which the addition of salt will affect coffee with different intensities. This was what I did.

Since the brewing method is said to affect the extraction of coffee and its corresponding taste, I kept my method constant with the use of a Nespresso machine. Using three capsules of coffee with different intensities, I brewed a serving of espresso for all three cups of my coffee specimens. After a taste test of the plain extracted coffee, I then added a pinch of salt into all three cups and did a second round of tasting. Even with just a tiny pinch of salt, the Linizio Lungo (intensity: 4, light roast) and the Livanto (intensity: 6, medium roast) were indeed a little more full-bodied. However, taste-wise, it was salty.

As for the darkest roast, the Kazaar with an intensity level of 12, the addition of salt did help in mellowing the intense bitterness of the original brew. The coffee was way gentler on my palate and surprisingly, it wasn’t salty at all. With that said, it still somehow lacked that bit of sweetness to complement this full-bodied and toasty brew.

Backed by science in addition to years of practice by certain cultures around the world, salting indeed works for some. However, it might not work for others. 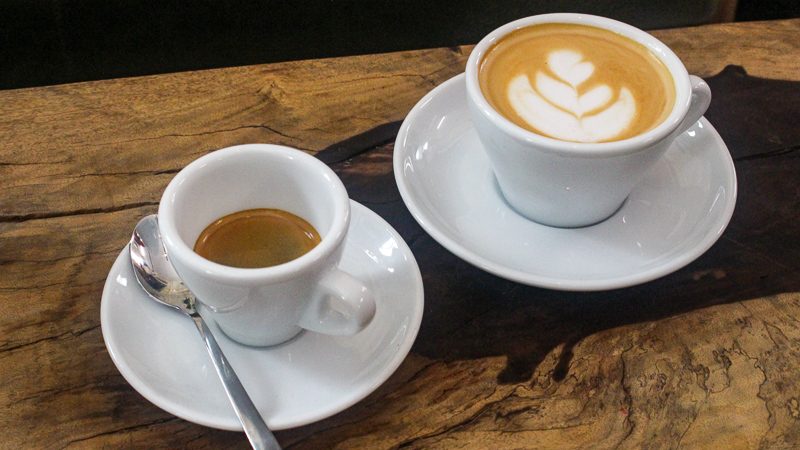 An important point I noted in the process of researching for this article was that we all have different perspectives and threshold of saltiness and bitterness. While some of us enjoy mild bitter notes in our coffee, others might not necessarily feel the same.

As such, it is essential for us to understand what we specifically like and how our sense of taste works before diving heads into salting a perfectly brewed cup of coffee.

Well, if you ask me, adding salt in coffee is definitely not an idea I would recommend for the simplest reason that the coffee we get in Singapore is in fact quite decent in quality. If you are ordering from a good roaster, there shouldn’t be such an intense bitterness that calls for salt. 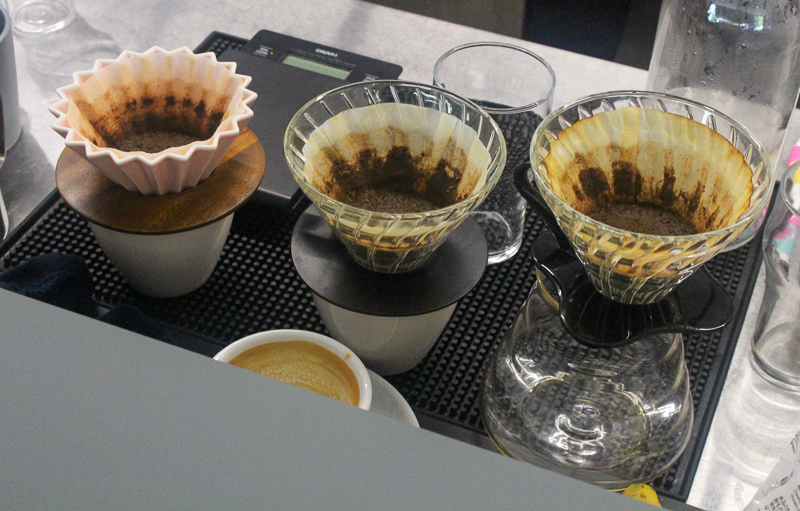 Even when we are making ourselves a cup of coffee from instant coffee powder leftover from our dalgona coffee adventure, the addition of sugar and a dash of milk can effectively mute the coffee’s bitterness and acidity.

At the end of the day, if you are an avid coffee drinker, all you need to do is invest in good beans, store them well, brew your coffee properly with fresh water and you won’t need salt bae to interfere in your daily caffeine routine.

Previous articleSimple Stay-home Recipes: Easy Chilli in 20mins
Next articleSave on Washing With Balsang Air Fryer Silicone Pot on Qoo10 From S$19.90 Till 31 May